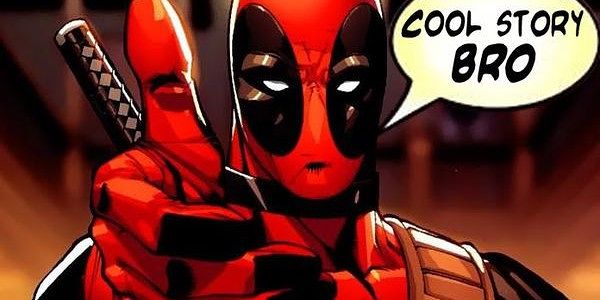 February 12 marks the release date of the first-ever solo Deadpool film. It will be the first time the character of Wade Wilson is seen on film—let’s pretend X-men Origins: Wolverine doesn’t exist—and many longtime fans of the character are excited to finally see an R-rated true-to-comic version of The Merc with a Mouth come to the big screen. Thanks to the brilliant fourth-wall-breaking viral marketing campaign behind the film, Deadpool has been thrust into the mainstream and into the awareness of those not entirely familiar with him. Here are the 10 best Deadpool stories for those looking to get into the character:

READ: Interested in the DEADPOOL film? Check out this article on the R-rated controversy!

For your introduction to Deadpool, look no further than the 2014 re-imagining of his first battle with Cable and the X-Force. Some of the most interesting anti-heroes in comics have been introduced as villains or at least antagonists to popular well-established characters (i.e. Black Panther vs. Fantastic Four, Punisher vs. Spider-Man). The Merc with a Mouth is no different, originally introduced in 1991, as an assassin out to complete a job. This 2014 storyline serves as a pseudo-prequel to the characters 1991 debut in NEW MUTANTS #98. Created by writer Duane Swierczynski and artist Pepe Laraz, this comic shows us the first meeting between Deadpool and Cable and how they went from enemies to a tentative partnership.

Written by Mike Benson and drawn by Carlo Barbieri and Sean Crystal, SUICIDE KINGS is definitely a great solo Deadpool story for those unfamiliar with the character. The five-issue run follows our favorite crimson assassin as he takes a job only to be screwed over and framed. Wilson goes on a murderous rampage for retribution while simultaneously getting to the bottom of the conspiracy. Overeall, SUICIDE KINGS is a fun, well-crafted story that gives some great insight into how Deadpool deals with revenge.

In 2014, Marvel gave their comic universe a soft reboot with the Marvel NOW! Initiative and with that came a new take on Deadpool with comedians Brian Posehn and Gerry Duggan at the story’s helm. The dead corpses of the presidents of the United States have been resurrected with some weird magic; it’s up to Deadpool to see to it they rest in peace. This comic is definitely a weird and funny one featuring some comedic cameos from Doctor Strange and some agents of S.H.I.E.L.D. This is Deadpool at his absolute best dealing with supernatural horror and politics simultaneously.

REVIEW: Up to date with Deadpool comics? Check out our review of DEADPOOL #6

The PULP storyline features Wade Wilson as an insane CIA agent on a mission to prevent a nuclear disaster during the Cold War. Though PULP is a major departure from how we usually see Deadpool, it still has all the weird offbeat humor that we expect from a Deadpool story. This 4 issue mini-series feels more like something out of a Frank Miller comic, complete with ninjas and a femme fatale, code-named “Outlaw”, from Wilson’s past. PULP is a refreshing story arc and a different Deadpool than typical readers are used to but a great read leading up to the film.

Also a part of the Posehn and Duggan run, THE GOOD, THE BAD, AND THE UGLY story arc follows Deadpool and pals, Wolverine and Captain America to North Korea where they uncover some dark secrets about Deadpool’s past. This arc keeps the book’s hilarious tone but juxtaposes it with a dark, disturbed sensibility that one can expect from a twisted character like Deadpool. It’s highly unlikely the film will follow in this run’s footsteps of mixing dark uncomfortable subject matter and the usual humor, but it is an essential read for Deadpool fans nonetheless.

Daniel Way’s 2009 – 2013 run with Deadpool is thought to be one of the wildest, yet most entertaining versions of the character. In “SECRET INVASION”, Deadpool, along with the rest of the world is facing a dangerous secret attack by the Skrulls, an alien race that can shape shift. This comic is an offshoot from the Marvel-wide Secret Invasion event written by Brian Michael Bendis that pitted the entire Marvel Universe against the shape-shifting Skrulls. We get to see Deadpool handle these super powered chameleons with his deranged sense of humor and usual violent flare, and this story arc began Daniel Way’s chart-topping run with Deadpool, which continued until the character’s reboot as a part of the Marvel NOW! initiative.

The most knowledgeable of Deadpool fans know that the red anti-hero is at his best when interacting with other characters in the Marvel Universe. Though Deadpool is most often associated with the X-Men, in DEADPOOL KILLS THE MARVEL UNIVERSE, we get to see the merc “interact” with everyone under the Marvel imprint. All the Marvel heavy hitters like Wolverine, Spider-Man, and Captain America meet their end at the hands of Deadpool. This highly entertaining story is similar to the Punisher’s 1995 comic, PUNISHER KILLS THE MARVEL UNIVERSE, but with a level of meta-humor almost unmatched in any other Deadpool story.

Rob Liefeld returns to illustrate the character he helped create with DEADPOOL CORPS VOL. 1, written by Victor Gischler. In this story, Deadpools from multiple alternate universes team up to go on a cosmic adventure. Deadpool corps has hilarious versions of the character such as Lady-Pool, KidPool, The Zombie HeadPool and some appearances from the cute Dogpool. One might think five Deadpools might get overwhelming and tiresome, but these whacky alternate versions work together more like a family than a team. DEADPOOL CORPS premiered in 2010 when we saw the huge boom in popularity for the Merc with a Mouth.

This super self-aware Deadpool story was written by Duane Swierczynski starting in 2008 as one of the first collaborations between the writer and the character. During preproduction of X-MEN ORIGINS: WOLVERINE film there were rumors of a Deadpool solo spin-off coming soon. This comic was a direct response to that. In X-MEN ORIGINS: DEADPOOL, we get to see him break the fourth wall in spectacular fashion as he tries to produce his own solo spin-off film. On February 12, we will finally get to see if Deadpool succeeded in getting his own film right.

This collected edition of Deadpool stories is filled with the early character defining runs written by Fabian Nicieza and Joe Kelly. As soon as Deadpool debuted in X-Force he was a fan favorite, but he was under much scrutiny due to the copyright issues surrounding Deadpool’s similarities with DC’s Deathstroke (Slade Wilson). In order to make Deadpool less similar to the DC Villain writers like Nicieza and Kelly were given free reign to re-invent and experiment with the character. It was with these late 90s story arcs that the character began to develop from a sadistic assassin to a wisecracking, fourth wall breaking anti-hero.

READ: Have you seen the DEADPOOL movie trailer!? Click here to read what we thought about it!

Any one of these stories is a great take on the character and sure to familiarize you a bit in preparation for the movie. You do not want to be one of those people in the theater wondering why he is talking to the audience or asking the person next to you what a chimichanga is, so study up! And be sure to check back with us after DEADPOOL hits theaters February 12!