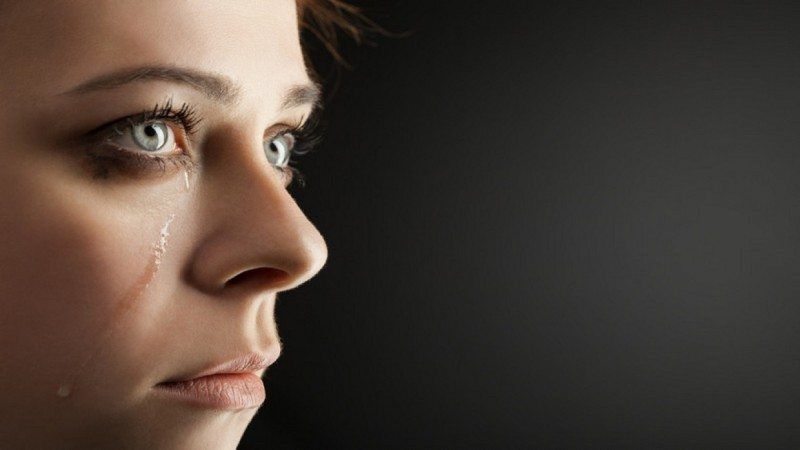 Perhaps it is not intentional, but there are so many people that seem to find abusive relationships between two or more characters fascinating. And, while dysfunction is, itself, a compelling subject, it is scary to see how many people want that sort of relationship for themselves. Why, though? Why do so many of us feel drawn to these charismatic or tragic figures as though we are the only one that can save them from the void?

There are millions of people out there who have that sort of superhero complex. They look upon figures like Edward Cullen, who is a mysterious, somewhat tragic loner and want to be the one to win his affections. Or, perhaps they view Christian Grey and his confidence and misanthropic personality and desire to be the only one that can bring out the hidden good he surely has? What about the Bella Swan figure, who is the damsel that surely any man would go out of his way to rescue, even if she emotionally drains and manipulates them. It’s not just men, either, mind you.

Aside from Bella, anime is a hot pot for abusive women that are prone to beat the crap out of their partners for the sake of comedy. Whether it is Asuka from Neon Genesis Evangelion or the crazed antics of the Tenchi Muyo harem, abusive and crazy women are so common in anime that they have their own qualifying character types: yandere, a portmanteau that takes yanderu, which means sick, and deredere, which means lovesick. This character is obsessive towards their partner and tends to be violent, if not psychotic, and sometimes hides behind a seemingly sweet and innocent persona. There’s also the slightly less crazy tsundere, which takes the same principle as yandere, except it is used to describe a person who is initially cold and mean, but gradually warms up to the love interest.

Therein lies the danger of romanticizing abuse. These are characters that define what others might be attracted to in real life partners. They’ll find themselves wanting to rescue the misanthropes, the dangerous loners or the damsels without any concern for the underlying behavior that could prove detrimental to their own health.

Here are a few symptoms of abuse in its various forms (note: this is a very brief list and doesn’t include all signs):

All of this sounds like something we’d want to obviously avoid. Yet, these things crop up in tons of media forms, and the audience they are pertaining to tend to romanticize and even crave them. But why?

Well, it may have something to do with the way abusive characters are portrayed. When they are especially realistic, they tend to mimic what draws men and women into abusive relationships in the first place. Abusers have methods, or modus operandi, in how they operate. They tend to be conniving, manipulative, overprotective, and entirely convincing that you cannot live without them.

Let’s look at our first example.

READ: The Evolution of Harley Quinn 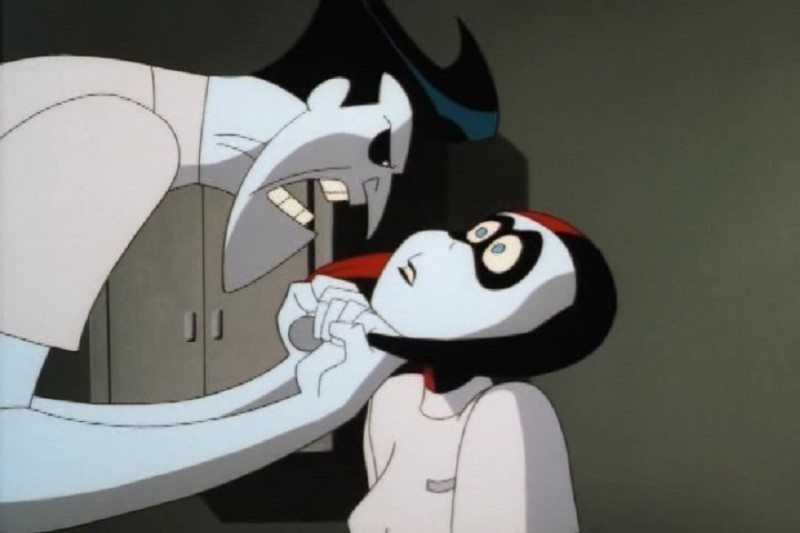 If the link above didn’t give it away, we’ll be discussing one of comic book history’s power couples: The Joker and Harley Quinn.

For those who don’t know, Harley Quinn, or Harley Quinzel, was originally created in the animated show BATMAN: THE ANIMATED SERIES. The character was so popular, that she was quickly adopted by DC Comics and has gone on to live quite a legacy for herself. Her beginnings were, in a word, tragic.

Harley Quinzel was a psychiatrist looking for a breaking case to gain her some good publishing material. Visiting Arkham Asylum, she just so happens to hone in on the Clown Prince himself, The Joker. In the beginning, Harley is doing all the standard shrink work, asking him questions and trying to get a feel for what drives his madness. Slowly, however, The Joker starts prying into her in return. He asks questions, he’s sweet, he sympathizes and Harley becomes absolutely fascinated by his unique perspective on the world. In a surprise decision, Harley breaks The Joker out of Arkham, now dressed in her titular harlequin costume and fully committed to helping her Clown Prince cause chaos.

For Joker fans out there, you might have guessed that he doesn’t turn out to be all that charming in the long run. Sure, he maintains his allure and mystique, and Harley follows him essentially to Hell and back, but just take a look at this tragic scene from BATMAN: THE ANIMATED SERIES episode MAD LOVE.

Not exactly so charming now, is he? He belittles her, undermines her capturing Batman (quite the feat), slaps her and then as if that wasn’t enough, pushes her out the window without a second thought. What’s worse is that Harley not only blames herself while lying in a crumpled heap but later, as she lies in Arkham Asylum and is grumbling how she’ll never forgive The Joker, she receives a note from him telling her to “feel better soon”. Her demeanor instantly goes from angry to appeased, and she’s all too ready to crawl back to his side. 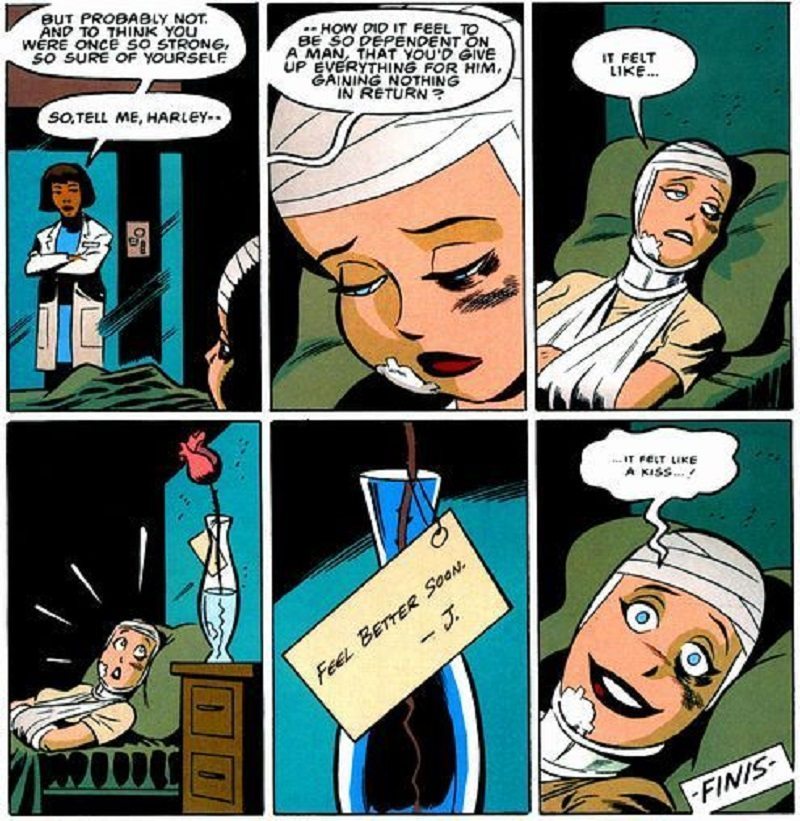 BATMAN: THE ANIMATED SERIES handled a lot of excessively dark material. Death, murder, revenge, suicide, abuse, and more. The kicker is that it handled all of this realistically, and MAD LOVE is no exception. It is a chilling depiction of an abusive relationship from manipulation, shaming, shifting guilt and the mentality of either party. Harley Quinn would stick by The Joker for an insanely long time before breaking out on her own. The sad thing is that, in many variations, she keeps crawling back. The Joker undermines her consistently, mocks her intelligence and manipulates Harley for as long as he has his claws in her. The portrayal of their romance is tragic.

What’s more confusing is that there is a slew of fans out there that absolutely adore this pairing. They wish they could be Harley Quinn and dance with The Joker, or be his lady love. Why is that?

Perhaps the second example will provide some insight.

Here we go, bringing up TWILIGHT again. Will the slander never end? Spoilers: it will not.

TWILIGHT brought in an excessive amount of fans, most notable in young girls and older women. They adored glistening vampire Edward or picturesque werewolf Jacob. Everyone wanted to be Bella Swan, caught between two gorgeous hunks that were fighting for her love. The problem is that, while TWILIGHT is pretty good for some teen fanfiction, the relationship between Edward and Bella is absolutely abusive – and on both ends, this time. 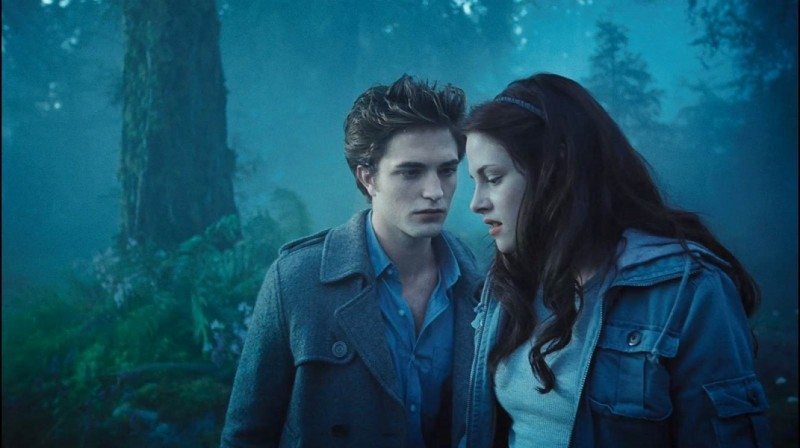 Edward seems perfect. He’s attentive, caring and, to him, Bella is the only girl in the world. That’s a fantasy everyone has had, right? We all want someone that makes us think we’re the most special, gorgeous person on the planet. Nothing wrong with that – except, in this case, it’s full on manipulation. He stalks her, he watches her sleep, and then, when things are getting complicated, he completely abandons her until she feels compelled to put herself in danger just to get his attention. Not cool. It is a betrayal of her boundaries and completely takes away her autonomy, assuming she ever had any.

What’s worse is that Bella is no better. She’s a teenage girl who is going out of her way to keep a man’s attention on her, to the point where she jumps off cliffs and deliberately provokes possible rapists. Bella is the equivalent of the girl who threatens to commit suicide to keep her boyfriend from leaving her, and Edward feeds right into it.

Abusive relationships come in all shapes and sizes and, don’t be fooled, either party can be the abuser, regardless of age, gender, etc. Playing with someone’s emotions like that, guilt-tripping them, stalking them, allowing them no space and generally being obsessed is absolutely emotional abuse. If someone is putting themselves in harm’s way, or making threats to harm themselves if you try to leave, that is also manipulative and abuse. As a tip from someone who has put up with this several times: call the non-emergency number of your local police and ask them to do a wellness check on the person, or tell a counselor at school. Do NOT let yourself be taken hostage by a, pardon the pun, emotional vampire.

So why do so many want this kind of relationship? Why would anyone be enamored with abusive relationships? Again, it comes back to that fantasy of being made to feel special. Abusers are fantastic at making their victims feel like they are the best thing in this world, and can be manipulative to the point of no return. Once they have their victims convinced that they are the most special person on the planet, the abuse typically starts to creep in. Insults, the silent treatment, shaming, placing blame — anything to make sure the victim feels bad enough to think they did something wrong.

One form of abuse that is not as well-known outside of certain communities is called “gaslighting”. This is when an abuser will try and convince victims the way they are remembering something is absolutely wrong. In other words, if you remember them calling you a mean name, they may try to convince you that that never happened, its all in your head and you’re crazy. The worst part is that many start to believe it. It is a common technique used in many kinds of abusive relationships, and it can make the victim feel unsure of their own sanity.

Many of us are drawn to ‘wounded birds’. We want to take those that have been hurt, or are different or cold to the world, and be their bright light. What most people don’t realize is that you cannot rescue someone who doesn’t want to rescue themselves. You can support them, love them, but the moment they start to abuse you, most don’t realize that they need to care for themselves enough to get out. Abusive relationships will rarely ever improve, no matter how much of a superhero you want to be for your abuser.

Abusive relationships do not solely exist between romantic partners either. Friends, family, coworkers – all forms of relationship can become abusive. No matter the victim’s role in the matter, it is important to recognize signs of abuse, as many believe that, if it isn’t physical abuse, it does not count or isn’t “that bad”. Any kind of abuse is unacceptable.

Everyone wants to feel loved unconditionally. It’s an inherent desire in all of us, and there is nothing wrong with it. You are not wrong for wanting to be loved, and wanting to be made to feel special. However, love comes with respect. It comes with the acceptance of boundaries, with trust and with a sense of emotional and physical well-being. You should not have to sacrifice self-worth, friendships, mental health, physical health or the very essence of your person in the hopes of obtaining that love. Where abuse is involved, people need to realize that that is not love.

Don’t romanticize abuse. Get educated and help stop yourself, and others, from falling into the same abusive relationships these characters did.

For a comprehensive list of various abuse types, signs and causes, you can read here.