We’ve all had moments where we’re watching a horror movie and shout, “Don’t go in there!” or, “He’s right behind you!” For me, most horror movies usually involve more eye rolling and saying, “Yep, camping out at Camp Crystal Lake despite the rumors of hundreds of murders taking place sure was a good idea, Billy!”

We know the horror movie tropes—they’re so common that they’ve spawned an entire horror-parody genre of movies like THE CABIN IN THE WOODS. Integral to many of these tropes is a cast of teenagers, most of whom are either extremely unlikable or without strong personalities. They come in five flavors: the slut, the idiot/meathead jock, the stoner/comedic relief, the virgin and, if you’re lucky, that one guy who is absolutely sure everyone is going to die and won’t shut up about it until he gets killed off.

Horror and bad science fiction absolutely adore them. Sometimes it feels like the directors of these movies all got bullied by teenagers or young adults who fit these tropes and are now seeking revenge by killing characters similar to them on the big screen. While that is just a conspiracy theory, it does beg the question: why are people in horror movies almost always idiots?

Though we grumpy adults might disagree, not every teenager or young adult on the planet is a jerk who would get themselves killed in a standoff with a giant monster or masked serial killer. That’s not to say that most of us would have better odds, but it is strange to see such foolish actions consistently repeated in horror movies.

First, no matter the stereotype on screen, these kids always seem to go and investigate the spooky sound or bump in the night. Logic probably dictates that someone shouldn’t go closer to a door that just flew open on its own or venture into the woods where an axe murderer is lurking, but these idiots always let curiosity overwhelm self-preservation. Why would this be?

Let’s take a look at something called Maslow’s Hierarchy of Needs. This is a psychological theory that explores the motivations of humans and why they might act in certain ways. The hierarchy, from the least important to the most important, goes: self-actualization, esteem, love/belonging, safety, and physiological needs. Note: the bottom of the pyramid below depicts the most important needs while the top represents more secondary needs. Self-actualization is the need to recognize talents and potential within oneself. If we were to apply self-actualization to horror movie characters, one might argue that they are attempting self-actualization by proving their bravery and facing the scary thing. While self-actualization is lower on the list of needs and therefore not as important, it still seems to trump safety, which is much higher. This is because these characters live with a mindset of assumed safety or the mentality of “it couldn’t happen to me.” 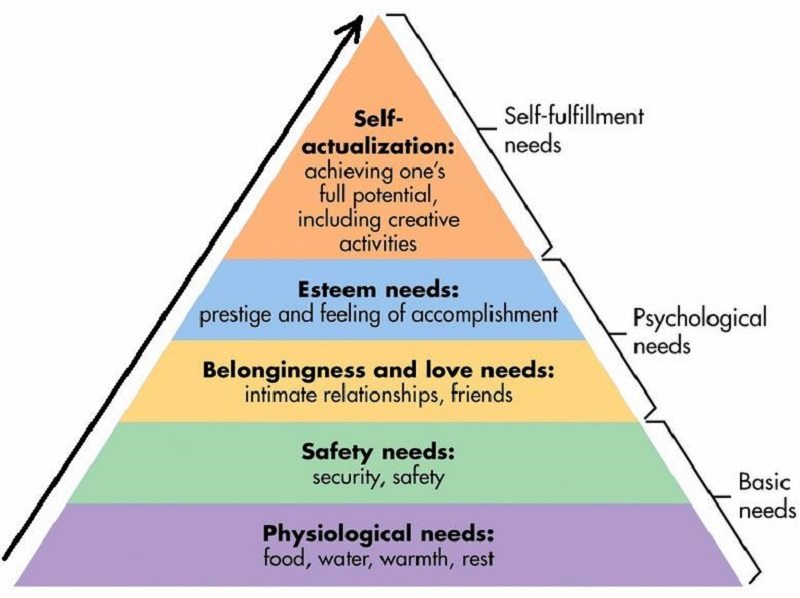 Horror movie characters often laugh off any rumors or signs of initial danger because of that attitude. Granted, a lot of us do the same thing with many activities or events that have elements of danger to them. Many of us get into a car every day and drive to work. We’ve done it a billion times at this point, so there is a sort of presumed safety that we have about common aspects of our lives. Many of us don’t really think about a car wreck happening, or any accident happening, because of the “it couldn’t happen to me” mentality.

So, let’s set a scene: you’re a young cheerleader getting frisky with the football captain out in an area where murders took place. He appeals to your need for self-actualization by confirming that you’re a great lover, your need for esteem by complimenting your body, and your need for love/belonging via the obvious. All of this trumps that little voice in your head that’s worried for your safety. Mid-coitus, you get a chainsaw to the face. In hindsight, and to the audience, it seems pretty dumb to be out screwing around where people were killed, or in the creepy woods at night, or during a zombie apocalypse, right? Especially given that physiological needs and safety are of greater concern.

However, with that aforementioned mindset, safety seems to be assumed in these scenarios. Because the cheerleader is with her boyfriend, and because the notion of something awful happening seems absolutely absurd to them, safety is assumed. The audience knows horror movies have none, but the movie’s internal universe is loaded with it—the characters just don’t know they’re in danger until it’s too late. The movies typically drop hints and warnings about the danger, but because they assume that they are safe or act with a sense of flawed logic—ego overtaking the need for safety—many horror movie characters are doomed from the get-go. 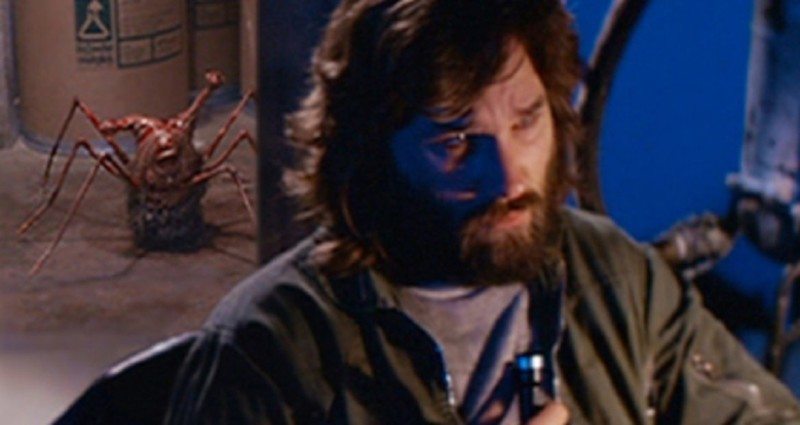 In short, physiological needs should, in theory, outweigh love and belonging in, say, the case of a zombie invasion. Physiological needs will drive someone to attempt dangerous things to preserve themselves. The need to be safe will help make it so they maneuver as carefully as possible while out in the zombie war zone. However, let’s say a zombie bit someone important to you. Your safety needs would dictate to get away from the zombie and get your loved one out of harm’s reach as well. Should esteem step in, as it normally does in horror movies, you might shoot at the zombie or kill it out of spite, risking alerting other zombies as well as wasting time that could be spent attending to the bitten victim. Love/belonging is the driving motivator that will lead to you deciding to keep an infected loved one around despite the risk of being bitten or to sacrifice yourselves to save your family.

In our world, safety would dictate the infected person should be put out of their misery or left where they cannot do harm, but often the characters will put love/belonging over that need. For us, the audience, this seems incredibly stupid. For the character, however, they have a deep bond with the infected loved one. We probably can’t sympathize with the relationship like they can, but if it were to happen in real life, there are many people who would make the same mistake. The portrayal of these needs taking precedence over safety might be realistic, but it comes across as idiotic to the audience because we know what’s inevitably going to happen.

READ: Want even more Halloween goodness? Check out Chris’ Top 5 Horror Comics To Get You Through Halloween!

Why is it inevitable? Well, the simple answer is that there would be no drama if everyone was competent. At least, that is what directors and writers assume. With most B movies, the teenagers have to be a little stupid or reckless to set themselves up for the kill. Let’s take SCREAM for example. Sydney, the main character, gets attacked by Ghostface twice. Instead of staying indoors and letting the cops keep an eye on her (not that they are very good at it, admittedly), she goes to a party with a bunch of other teenagers. Now, maybe one can argue that she feels safer in a big group than at home with cops nearby. Regardless, Ghostface does sneak in and murder another teen in the garage of the house where the party is taking place.

Even in a herd mentality, which has existed as a survival mechanism for thousands of years, people often forget that for it to work someone is still going to die. Even with the “it couldn’t be me” mentality, the statistics are typically in favor of the most ill-prepared person dying or the one person who separates from the herd. It is only when someone gets picked off that the rest of the herd panics and sticks closer together. Death is a frightening thing, and most of us spend our lives trying not to think about it or the possibility that it could happen to us. For horror movies, the characters see someone get killed and think, “Oh no! Well, at least it wasn’t me,” and think that’s that. How often does that prove to be really true? Almost never.

So many times have characters abandoned the “let’s stick together” idea to go off on their own that it makes getting killed all the easier. It defies the very nature of the herd mentality and seems to be either a necessary writing device to position characters in the kill zone or a psychological example of esteem taking priority over safety in many cases. These things appear in the form of characters yelling out “Hello?!” when confronted with a noise, hiding in a confined space with no escape, insistently staying in a haunted house and not moving out, and not killing the murderer when the chance presents itself.

Is this what real humans would do if presented with something strange? Well, sadly yes in many cases. Episodes of the television show SNAPPED—a documentary style show that depicts cases of women committing murders or heinous crimes—often start with murderous women, or someone close to the victim, investigating a blood trail or a horrible smell on their own before calling the police. In shows where they talk about hauntings or malevolent spirits, nine times out of ten people will stubbornly cling to their homes for as long as possible until they get seriously scared or injured, causing them to finally move out. While this is not always the case, it seems to be a common response that humanity has learned to use when confronted with danger.

So, does this make horror movie characters surprisingly realistic in their reactions? Not really. They’re still largely idiots that are expected to be killed off, as is the standard horror movie formula. We’ve all joked that the virgin is the only one that lives in horror movies, but the formula seems to be changing a bit as horror evolves. While fans of horror movies will still, no doubt, have to be exposed to the same tropes and the same idiocy over and over again for some time, it is not wholly unrealistic. Horror movie characters are idiots because they have to be in most cases, otherwise the plot fails or fewer characters risk death to keep the movie going. Yet, the psychology behind their actions is not without merit and a basis in reality.

Most of us fear death. We don’t like to think about the possibility that we might experience our own horror movie scenario one day and not be able to do anything about it other than what these teenage idiots often do. Hardcore horror fans might immediately step up to the challenge and say, “Nope, I’ve seen how this scenario ends. We’re going to hold out in the gun store, not the Chuck E. Cheese’s next door. I don’t care that they have pizza!” It is fair to say that many of us live in denial, thinking that nothing bad could ever happen to us, but real life is much more dangerous and more frightening than we give it credit for.

Remember that the next time you’re laughing at the cheerleader who went to investigate the creepy basement by herself that that could be you one day, unless you remember: safety first.