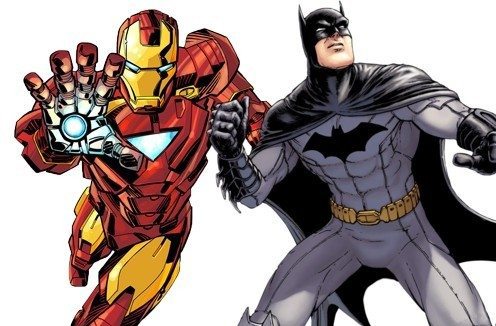 Duality is an important idea for comic book superheroes, although DC and Marvel approach that notion in dissimilar ways. For instance, Peter Parker’s personal struggles are amplified by the fact that he remains resolutely Peter Parker, even when wearing the Spider-Man suit, whereas much effort has been devoted to addressing the question whether Batman is a pretense in which Bruce Wayne engages or Bruce Wayne is the façade for the real Batman.

Recent superhero movie franchises illustrate how the competing industry giants arrive at similar destinations by divergent avenues. In Batman Begins, Rachel tells the protagonist that Bruce Wayne is the mask and Batman is his true identity. If Christopher Nolan believed that when he made the first Batman movie, he no longer believed it by the time he made the third one; at the end of The Dark Knight Rises, Bruce abandons the cape and the cowl in order to live his real life as himself, while a new hero prepares to take up the role of Batman and serve as the symbol Gotham City needs . . . or, perhaps, does not need, but deserves. At the end of the day, the Batman/Bruce Wayne duality was resolved when Wayne won out and the Batman identity passed to someone else, though the two halves of the hero’s psyche had to go through three films’ worth of struggle with one another before reaching that culmination.

The ultimate resolution of the Batman/Bruce Wayne duality in Nolan’s cinematic trilogy echoed Tony Stark’s response to Steve Rogers’s challenge in The Avengers. When asked sarcastically what he would be without the suit, Stark replied that he would be a genius billionaire playboy philanthropist, which is exactly what Bruce Wayne is without the suit. If Wayne wants to make the world a better place, he has other options besides being Batman, such as supporting political reform candidates like Harvey Dent and funding social services through the Wayne Foundation. The existence of such viable alternatives made it possible for Bruce to surrender his superhero identity yet still make a difference in the world even after shedding the mask.

Likewise, the Iron Man of the Jon Favreau film trilogy was never anything more or less than the continuation of Tony Stark by other means. Indeed, in the films, Stark never used the armor for anything other than cleaning up his family’s messes: In Iron Man, the terrorists are supplied by Stark Industries weapons and Obadiah Stane becomes Iron Monger in reaction to Tony’s decision to take his father’s company in a different direction; in Iron Man 2, Ivan Vanko seeks revenge as the son of Howard Stark’s former collaborator; if Tony Stark had turned in early on New Year’s Eve 1999, none of the bad stuff in Iron Man 3 ever would have happened. Iron Man exists only to eliminate threats the Stark family was responsible for creating.

Iron Man’s armor, in short, was never more than an empty suit; indeed, in the climactic confrontation of Iron Man 3, the Iron Men who go into battle literally are empty suits, which only Tony can wear. (Rhodey must sit out much of the affray because the Iron Man armor is coded solely for Tony.) Stark spends much of the film as himself, with his armor only inert, arriving late to the scene, and shattering into pieces for laughs.

Since the armor is a merely a shell, Stark’s duality lacks the anguish of his fellow billionaire’s. His fans know that Tony, not Iron Man, is the real hero; he reveals his secret identity at the end of Iron Man, uses the armor strictly for show at the start of Iron Man 2, and meets a devotee who, tellingly, has not an Iron Man tattoo, but a Tony Stark tattoo, in Iron Man 3.

After initiating the prearranged protocol to destroy the suits, Stark says it explicitly: Without the lab, without the armor, and without the arc reactor in his chest, he’s still Iron Man, because Iron Man was never anything more than Tony Stark in a souped-up suit. Despite their differences in temperament, Tony Stark and Bruce Wayne each resolved the duality at the end of the trilogy in favor of the real person because the mask, ultimately, was just a façade for the man.

For both, the hero was the human being, and the suit was simply showy symbolism, even though Tony enjoyed the journey much more than Bruce. Hence, for Stark and Wayne alike, duality represents a bit of a false dichotomy, as Iron Man and Batman were but means to an end. There is, however, another superhero for whom duality assumes not one true identity too many, but instead one too few; namely, Superman, to whom we will turn in the next installment of this examination.