It’s official: on Tuesday, some pages from Brian Michael Bendis’ All-New X-Men #40 leaked.  The leaked pages include a dialogue between All-New X-Men’s Iceman and Jean Grey.  And this dialogue revealed what was probably intended to be one of the biggest revelations in the last issues of Bendis’ run on the X-Men: All-New Iceman is gay.

I was actually quite thrilled about this.  Iceman, one of the original X-Men, who had various girlfriends, such as Polaris or, just a year ago, Kitty Pryde, or at least the young, time-displaced version of him suddenly turns out to be gay. It’s kind of an exciting idea, because it does not only put another complexion on the whole character and his love life in decades of comics, it also offers great new opportunities for further character development. It’s also a twist that I, personally, haven’t really seen coming.

But cast your eyes to the comments sections under articles about the leak.  This revelation actually seems to be rather controversial, even among hardcore X-Men fans.  Most people seem to dislike what Bendis is doing with the character.  So, in this article I’m going to list a bunch of typical complaints about this and give my personal opinion on each point.

Why? Because a character that you thought was straight turns out to be gay? The X-Men are basically a metaphor for discriminated minorities, so that seems pretty homophobic.  In the 1990s, Marvel’s letter-column included this statement from their office:

“Quite simply, that is the quintessential message of his dream: that all of us, despite differences of color, gender, appearance, sexual preference or even, mutant abilities, must come together and learn to live together.  That is why there are X-Men in the first place.

And you’re totally allowed to hate Bendis. But not just because his books include homosexual characters. If you’re angry at him for displaying homosexuality as something that exists, you’re going to have a hard time reading comic books in the next years. Also, if you have something against homosexuals, I don’t really think you understood the X-Men.

This is diversity for the sake of diversity! Iceman is an example of them trying to push an ideology into comic books!

It may seem annoying for some readers to see more and more diverse characters in comic books. After all, two of the most important right now Avengers are a black guy and a woman. In the recently announced All-New, All-Different Avengers team, we barely have any straight white men. And there are also more and more homosexuals in comic books. I just don’t understand why that would be a bad thing. 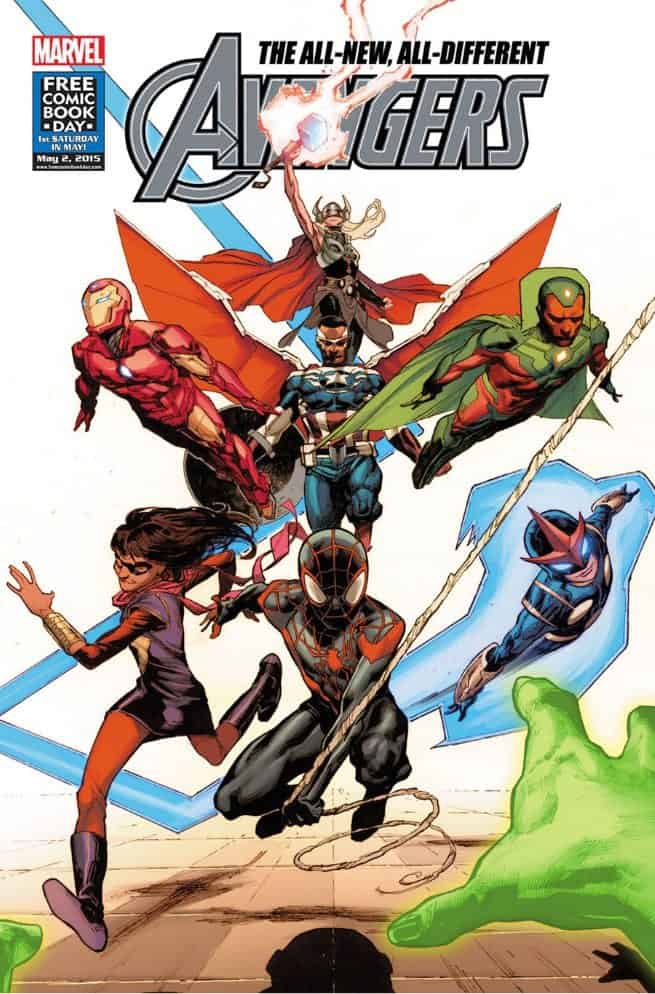 Storytelling-wise, it might seem forced. But, then again, a world of superheroes that only consists of white men attracted to women would seem horribly unrealistic – more or less exactly what we had back in the 60’s. But we, as a society, have learned a lot since. We’ve learned that black people are not inferior to white people. We’ve learned that women can be just as powerful as men. And, at least most of us, have come to the conclusion that it’s totally OK to be homosexual. So we may never make the mistake to exclude these groups of people from comics books.

And it also makes sense. In a world full of straight heroes, it just makes sense that some heroes would be gay. The LGBT community makes up about 5% of our population, so why wouldn’t it make up around 5% of the superheroes? Same thing goes for women and black people, obviously.

It’s not even anything new. Just look at the second team of X-Men that we’ve been introduced to in Giant-Size #1. We have a black woman, a small guy from Canada, someone from Germany… no one complains about that! Which is good! The X-Men have always been about diversity. And gay characters like Northstar, Anole, and Ultimate Colossus have existed for a long time, as well.

Portraying these diverse characters doesn’t have anything to do with ideology. It’s not ideology that these kinds of people exist, it’s a matter of fact.

And if implying that it’s totally OK to be different means pushing an ideology into comic books, I don’t really see anything particularly bad about it. Again, that’s nothing new and that’s what the X-Men have always been about. And after all, if you’re saying that you can’t make a political statement with comic books, that basically just restricts artistic freedom.

Instead of making Iceman gay, they should introduce new homosexual characters!

You know, I can kind of get behind this. Characters like the new Ms. Marvel that belong to a certain minority have been introduced successfully. They’re not even reduced to the fact that they belong to that certain minority (there are so many interesting things about Kamala Khan besides from her cultural background), so that kind of stuff does work out. 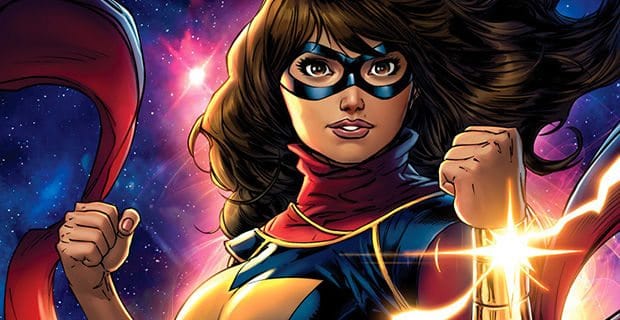 But, on the other side, these newly introduced characters will probably have a hard time competing with characters that have already been established and that have been around for more than 50 years. These characters – Captain America, Thor, Iron Man – have become pretty iconic. By making  one of these characters gay or by replacing them with black people or women, you basically say: if these iconic heroes lived today, they could be female, black or gay – and that’s totally normal. It’s a way of modernization. Otherwise, you would have your cast of white, male and straight famous characters on the one side, and a bunch of diverse, but not really well-known C-listers on the other side. So making Iceman gay sends out a pretty strong message, in my opinion: “if even one of those extremely famous superheroes is gay, it has to be something totally regular.”

This goes way beyond comic books. Just take a look at the new Fantastic Four movie. A bunch of people complain about the fact that Johnny Storm is black in this movie. They don’t want characters to be changed. But does a different skin color change Johnny, at all? A white Miles Morales would be strange. But Johnny’s skin color doesn’t have anything to do with his character, just as Iceman’s sexual orientation doesn’t have anything to do with HIS character. Which is why all this doesn’t radically change the character. Why should Johnny Storm not be portrayed by a person of color, and why should Iceman not be able to turn out to be gay?

In the end, I don’t have anything against Marvel introducing new diverse characters. I really appreciate some of them, for example Benjamin Deeds or Ms. Marvel. But then again, I don’t really see why iconic characters have to stay exactly the way they were 50 years ago. So a bit of both probably won’t hurt anyone.

That doesn’t make any sense, old Iceman is obviously not gay! He was written as a straight character all the time!

First off: there’s no such thing as “written as a straight character”. What do you expect him to do, wear pink underwear and talk about adopting an Asian baby together with an overweight, 40-year-old guy? There have been so many prejudices about homosexuals that most people forget how gays are regular people, they don’t have to act especially feminine or something like that. I bet if Northstar had never been together with another man or mentioned his sexuality in X-Men comics, we wouldn’t even have noticed that he’s attracted to men! I really think we have to remind ourselves that there’s no such thing as “acting gay” or “acting straight”. 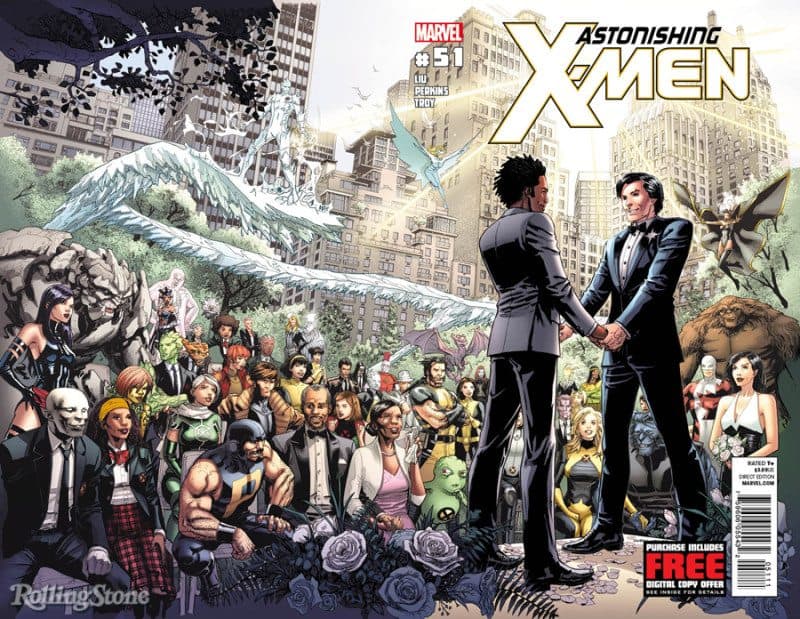 But what most people complained about was the fact that “regular” Iceman is “obviously straight”. But, then again, we don’t know that. Like, not at all. He did have MANY relationships with women,  but he always had a complicated love-life. Couldn’t this be his way of overcompensating? This is not unusual amongst closeted gay men. And young Bobby could have come out of his closet a lot of time earlier, because he had, to a certain degree, a different life and his character developed into a different direction.

Cast your minds back to ‘Astonishing X-Men #62-65‘, the one time when Iceman almost killed everyone on the planet.  In that arc, it explored how his relationships with women had never actually worked out, and the relationship with Kitty wasn’t as idealistic as he’d imagined it to be.  He’s emotionally fragile and feels trapped, misunderstood and lonely.  It’s just like a confused man who’s not yet fully aware of his feelings.  He could be gay at this point in time without realising it, with all of his relationships a way of overcompensating.

There’s one scene where he keeps screaming at Kitty that he could be stronger and bigger for her, just like Piotr. I think this really points out the issues he has with masculinity, once again a way of overcompensating.

Bobby actually mentions in the dialogue from the leaked pages that old Iceman could possibly be gay, but never really admitted his feelings, because he didn’t want to be part of two minorities at once. He also thinks it could be a possible explanation that he’s bi, but Jean, as a psychic, thinks that he’s “more…full gay…”. Some people actually said that this scene dismisses the existence of bisexual people, but I don’t really think so. They even discuss this as an option, but Jean has been in his mind and knows better.

But it’s not like there hadn’t been rumors amongst fans for years. And there have been lots of hints in comics, as well. Some of them more subtle… 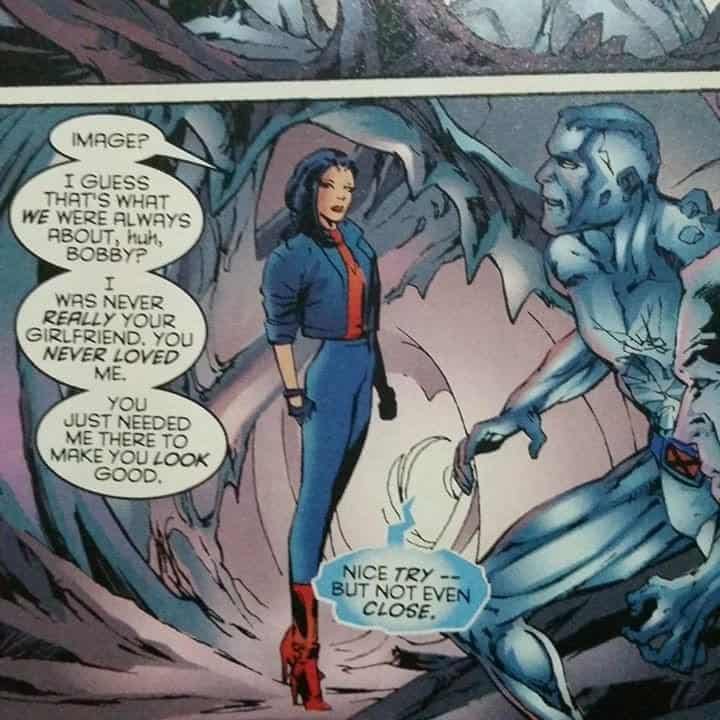 …others not subtle AT ALL. 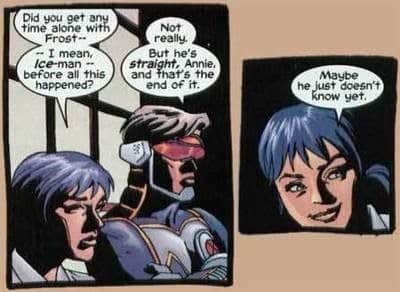 In fact, again back in the ’90s Iceman went on a road trip with Rogue post-‘Age of Apocalypse‘, and many readers joked how he seemed like Rogue’s gay friend along for the ride.

Funny thing is, he was actually once called a homophobe after he found out that Northstar was gay and reacted like this: 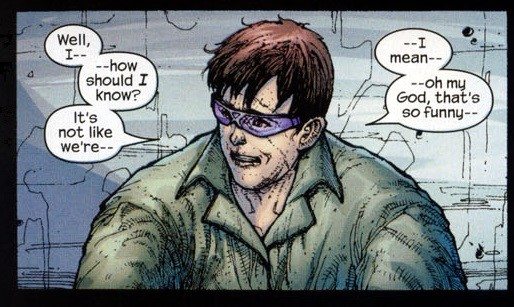 Bendis actually responded to people pointing out these hints in an interview with CBR, saying:

“…there are other people who weren’t surprised at all. Already on Tumblr, and I’m not going to repost them until later in the week, people have posted a road map of panels of things that Bobby has done over the last 50 years that prove the point that I thought was obvious, and many others did too.”

I’m not a big fan of conspiracy theories, but this could actually be something Marvel has been planning for years. Which is why I don’t even think this is a quick cash-grab.

In the end, there are certainly still a few questions left unanswered. And we haven’t read the end of this story yet. Bendis already announced that we would get to read more about this in Uncanny X-Men #600. So let’s just wait and see. But I can not at all understand the anger this revelation caused, and probably, especially as X-Men fans, we should ask ourselves why the fact that a fictional character is attracted to men instead of women is still something to rage about on the internet.