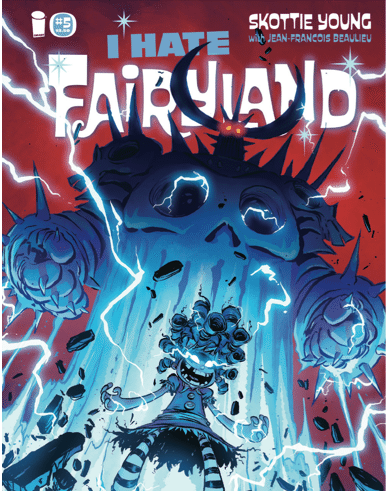 I love everything about I HATE FAIRYLAND. The art, story, and characters are like nothing else I have ever seen in a comic before. For those of you who’ve never read it (and I do envy you because you will have the joy of reading it for the first time), it’s a pretty simple story. A little girl named Gertrude is sucked into a world called Fairyland full of gumdrops, cute little critters, and happiness.

She is then told that she must find a magic key to open a door in order to get back home. She’s been searching for that damn key for 27 years. Gertrude is now a grown woman trapped in the body of a child, and she spends her time trying to slaughter her way out of Fairyland.

In this issue, Gertrude has earned ominous powers from the sinister Darketh Deaddeath. These give her an edge over Happy, another little girl transported to Fairyland. The stakes are high, as only one of them may use the key to return home, leaving the other trapped. The two face off in an epic battle of happiness versus hatred. It’s a well-drawn final showdown scene that fits with the rest of the book’s vicious whimsy. 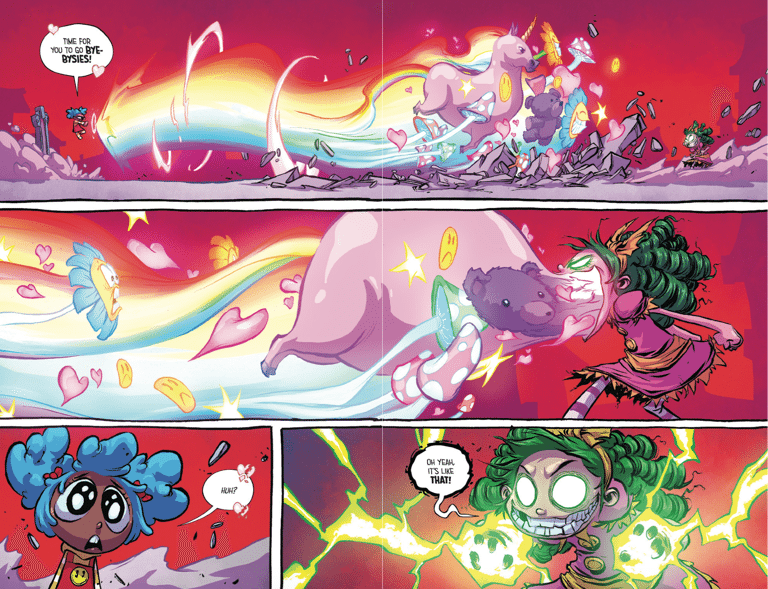 Skottie Young is brilliant. His art combines elements of extreme violence you’d see in a Tarantino movie with characters that look like something out of a kindergarten library. These things shouldn’t work together, but they do in Young’s hands. He shows that he’s not afraid to be silly, which is very refreshing. I can’t help but smile whenever I look at his work. It takes cartoon violence to the extreme while still keeping the upbeat and bubbly spirit that Gertrude hates so much.

This is also reflected in the language. Instead of cursing, characters say things like “You piece of flip!” Just like the rest of the comic, it’s something cute combined with something decidedly not cute. 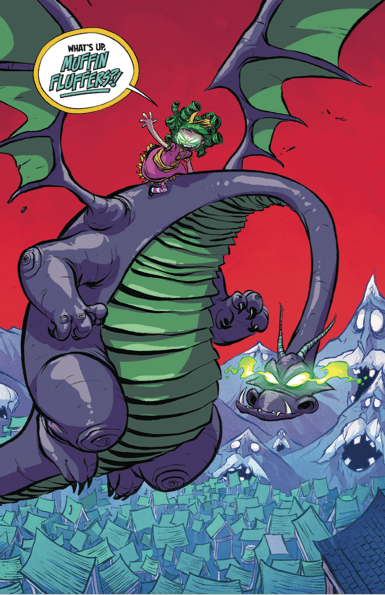 No one is safe from Gertrude’s wrath. Magical creatures are gutted and smiling suns are obliterated without hesitation. Blood and viscera fly across landscapes filled with rainbows and adorable little fairytale villages. Gertrude takes a sick delight in all of this carnage, and the reader can’t help but root for her. The feeling of identifying with such a violent character is odd, but it makes sense.

I think I respond so well to Gertrude as a character because of how passionately she hates Fairyland. Characters are strong when they have strong motivations and emotions, and Gertrude is no exception. It’s also hilarious because most little girls would love to be in a magical world, but Gertrude has been there for far too long. After seeing that many people sickeningly happy for so long, I’d probably start swinging a battle axe too.

This issue was advertised as the conclusion for the series, but luckily, this is only the beginning! Skottie Young said that the issue was originally penned as a 48-page one-shot, but it took on a life of its own and will continue for many issues to come. I can’t wait. This is one of the best comics I’ve ever read. Plus, the concept is like nothing I’ve ever seen before. Get out there and read this brilliant piece of work, you dirty Mother Fluffer!