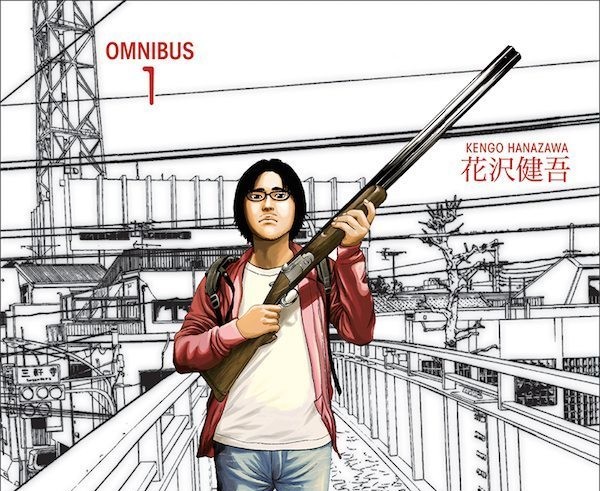 I AM A HERO is an award-winning manga series by Kengo Hanazawa that is light on the zombies, but heavy on commentary about modern Japanese values. The story features protagonist Hideo Suzuki, a 35-year-old assistant manga artist, or mangaka, who lives an unfulfilling and unrewarding life in Tokyo. His excessive work hours – which is not surprising in Japan, as it is one of the most industrious work forces in the world – coupled with low pay and high performance standards, exacerbates Hideo’s psychosis. Hideo lives his life talking to his imaginary friends and being paranoid that his lovely and successful girlfriend, Tetsuko Kurokawa, is cheating on him with her uber-successful, mangaka ex-boyfriend Nakata, the man who is everything Hideo is not.

The first volume is entirely devoid of zombies. Instead, readers are treated to a considerable view of Hideo’s daily life and the ways modern Japanese social values manifest in the protagonist’s life. The title, I AM A HERO, is used ironically throughout the first two volumes. Hideo can’t shake the feeling that he is an extra in his own life – he is not the hero in his own story, let alone his girlfriend’s story. This fact bleeds into his professional life; his main characters are forgettable and lack presence and motivation. It is at this point in Hideo’s life that the readers are first introduced to our utterly unlikeable yet painfully relatable protagonist.

The first volume of the manga suffers from the usual growing pains of any new creative project. The art is rather crude at the start; the excessive shading and use of heavy lines and tones make for a headache of a read in the beginning. Like all mangakas who begin a new series, however, Hanazawa finds his rhythm stylistically by the second volume, and the art only continues to grow in refinement and beauty as the series continues. The plot and pace of the manga also suffers in the first volume. At times the story lumbers along without any sense of what’s to come next, and at other times, it rushes through at whirlwind speeds to reach the next moment in time. The bumbling pace in the beginning is likely an attempt to construct a deliberate and brooding atmosphere, but Hanazawa falters in execution.

WANT more manga? Check out our introduction to manga here!

What the manga lacks in art, pacing, or refinement is more than supplemented by Hanazawa’s restrained treatment of Japanese social values, especially his depiction of gender relationships in Japan.

Japan, like many other East Asian countries, is, by and large, the definition of the patriarchy. It is a male-dominated hierarchy with a strict adherence to tradition and custom. Although time has improved the situation considerably, women are still restricted in both the home and work place. This male egocentrism is pervasive by virtue of how normalized it is. 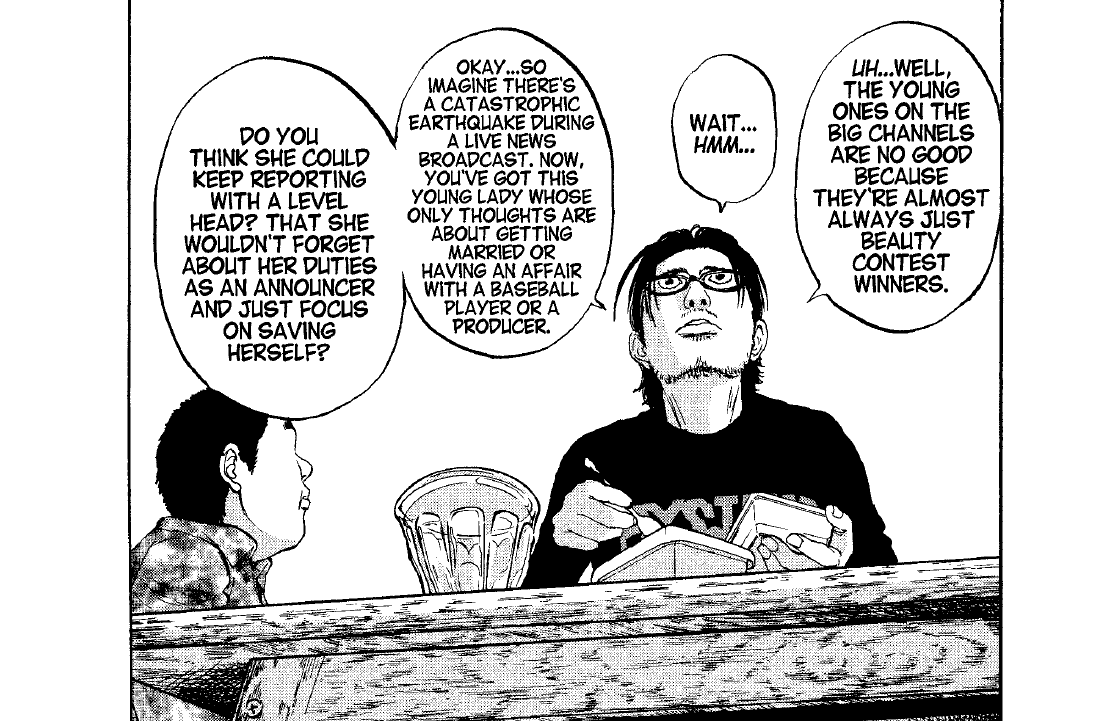 Here, Hideo comments about how he dislikes female anchors. He uses these women as scapegoats for his own professional failings – suggesting that they achieved success through superficial beauty and by relying on their femininity, charming viewers solely by capitalizing on the male gaze. Hideo implies that these women didn’t earn their success, that they didn’t struggle and suffer as he did. There is a dissonance between his subconscious, which realizes that his failures as a mangaka are entirely the fault of his own lack of talent and conviction, and that of his conscious, which refuses to assume responsibility for his lack of success. He’s just biding his time and paying his dues until success finds him.

He feels that these women cheated by relying on their sexuality without understanding the ways in which these very same women have to overcome such ubiquitous stereotypes. Hideo is not alone in this ideology; his coworker who has achieved a similarly dismal amount of success even comments at another time that he dislikes a particular anchor because she’s a serious reporter and doesn’t cater to male viewers. These men are intimidated by and feel belittled by female success. In their world, women are set up to fail because how a woman achieves success, whether it be by their own merit or their femininity, doesn’t matter to them. In their world, women should cater to men. That is the protocol; that is status quo. A women’s success is only acceptable when that success is given, approved, or by the blessing of men.

READ our review on Inio Asano’s A GIRL ON THE SHORE!

Nowhere is this mentality more prevalent than in the work place. “Mii-chan” as she is referred to by her male coworkers, is a constant source of workplace gossip and derision. While all her coworkers are referred to by their last names, a sign of respect in Japan, or their first name, a sign of equality and familiarity, she is called by a cutesy nickname. The rest of the office presumes this is a sign of affection and that “Mii-chan” should be flattered, even indebted to them. In fact, she is the target of constant harassment by said male coworkers. They order her to accomplish all menial tasks, such as turning on the TV, unrelated to her position as their peer, a fellow assistant artist. She is also lambasted by her male coworkers for sleeping with the boss and for not sleeping with them.

Hideo is similarly intimidated by his girlfriend Tetsuko’s success as a mangaka and her close professional relationship with megastar mangaka Nakata. At some point in his past, Hideo had a serialized manga in a large magazine – the goal for any mangaka – but this success was short-lived, as his title was unpopular with readers and was canceled after only two volumes. Hideo joined his present company on the heels of this crushing defeat, and it was then that he met Tetsuko who was also working as an assistant. Where Hideo once had success and has since fallen, Tetsuko’s career has been on the rise. She now has her own serialized manga in the works and has a close working relationship with Nakata. Tetsuko’s rise mirrors Hideo’s fall, and this is a major source of his insecurities as a mangaka. Hideo sees Tetsuko as a competitor. 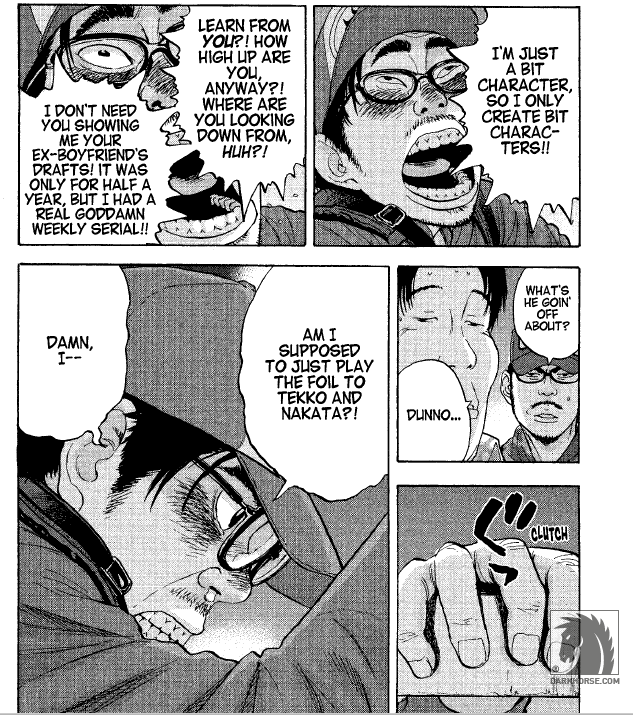 Meanwhile, Tetsuko is his biggest supporter, sending his drafts to Nakata and offering her own suggestions despite his numerous professional and personal shortcomings.

When Hideo confides to Tetsuko about his insecurities as a manga artist, Tetsuko, instead of shrugging off Hideo concerns about her close relationship with Nakata, discards all of her copies of Nakata’s books and replaces them with the two volumes of Hideo’s canceled manga, UNCUT PENIS.

LOVE seinen and horror? Here are our top 5 seinen mangas of all time!

Of course, Hanazawa is not without his own shortcomings in his depiction of women. A quick read of Tetsuko would seem to showcase a successful and intellectual woman who is playful, free-spirited, compassionate, thoughtful, and sexually liberated. She is constantly thinking of ways to help Hideo rediscover his passion for storytelling, by spending both personal and professional resources, and is always quick to offer a listening ear or a warm meal when Hideo is down.

While it’s rare and refreshing to see a women represented in such a glowing and saintly manner, she largely serves to embody two common tropes in the world of anime and manga – the ‘manic pixie dream girl’, who is wild and inspired, and the ‘magical girlfriend’ trope, the beautiful, kind, and devoted girlfriend who gives the main character and the reader an inferiority complex.

Hanazawa, however, doesn’t limit himself by focusing on only one side of the gender conflict. Instead, he shows how the male-centric mentality and strict gender roles of the culture is disabling to both genders.

NEED a change in pace? Why not try a romance manga instead?

Just as the previous panels depict ways in which women are expected to be indebted and inferior to men, it also showcases the privilege and due diligence men in Japan come to expect from society. A man’s success is an expectation, a right even, and when the success and respect that was promised to them by a society that centers around the association between success and masculinity isn’t delivered, men feel cheated, robbed, or otherwise wrongfully ignored.

Their genius has been overlooked by a backwards society that has forgotten its values, that has been soiled by whatever is a convenient excuse. It’s not that they aren’t any good or that they’re simply unlucky, but that society has wronged them. 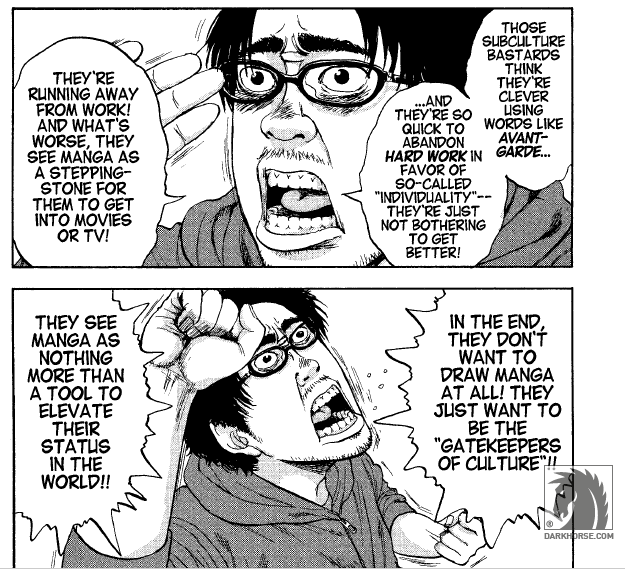 I AM A HERO likely wasn’t intended to be a social commentary on the state of society in Japan. Rather, Hanazawa skillfully incorporates very real social values into a realistic and immersive world that all readers, irrespective of gender, can understand. This lends itself to the premise of a modern zombie apocalypse; I AM A HERO feels real because the world it’s happening in is very real.