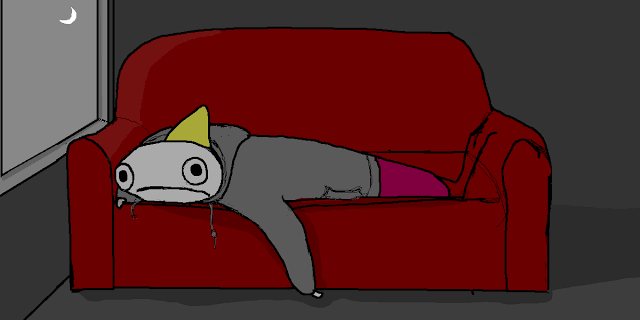 As a society, we don’t really like talking about depression very much. Emotions are complicated and scary, and they get in the way of being productive. So, when somebody mentions that they’re depressed, nobody knows how to react. As a result, people will try various approaches to the topic that are distinctly not helpful.

Allie Brosh, creator of the part-webcomic part-blog HYPERBOLE AND A HALF, has chronicled many of her own experiences with depression. She utilizes a purposefully crude art style to reflect her negative feelings towards herself, and often focuses on finding the humor in having a mental illness. In one comic, “Depression Part Two,” Brosh goes into great detail on how people have reacted to her when she starts talking about her depression. Her stories are instantly relatable and hilarious to many people who live with mental health issues, myself included, so, I feel it is appropriate to use parts of her webcomic to guide us on how (not) to react to the topic of depression.

READ: Pokemon GO can be a great way to alleviate symptoms of mental illness while having fun!

1. Trying to Solve their Depression 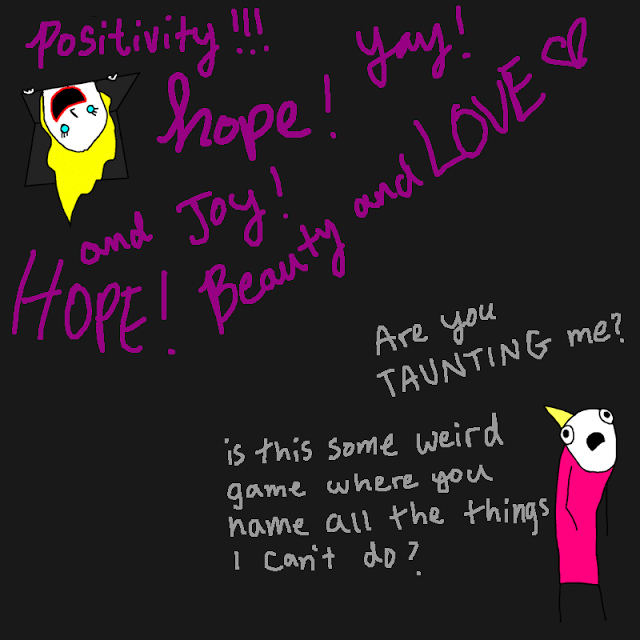 It can be very scary to hear that someone close to you has depression. Obviously you care about them, and you don’t want them to be in danger. And so it’s tempting to just try to throw solutions and advice at them in the hopes that something you say will magically solve their problem.

However, this demonstrates a distinct lack of understanding of how depression actually works. For instance, in HYPERBOLE AND A HALF, Allie Brosh struggles with explaining her depression while others are already in the process of trying to tell her how to fix it. A deep misunderstanding occurs. Brosh’s friends think the problem is that Brosh is sad and needs to cheer up. Meanwhile, Brosh knows that the problem is that she is apathetic and no longer has access to any of her emotions.

Brosh compares this to “having a bunch of dead fish, but no one around you will acknowledge that the fish are dead.” Instead of acknowledging her problem (dead fish/dead emotions), everyone tries to give her suggestions on how to liven up her fish, based on their own experiences with fish that are still kicking.

No one will pause and think that maybe Brosh has a different problem than anything they have gone through before and that maybe they don’t actually have the answer. And that’s okay, because just talking about depression without any sort of goal for dealing with it can be helpful in and of itself.

Brosh says that maybe she was “just looking for someone to say ‘Sorry about how dead your fish are,’ or Wow, those are super dead. I still like you, though.'” That can be validating when you feel like your struggles aren’t legitimate. And it can be meaningful when you think you’re a bad person for being depressed.

Just letting a depressed friend vent can be way more useful than any quick solution.

2. Waxing philosophical about the beauty of life 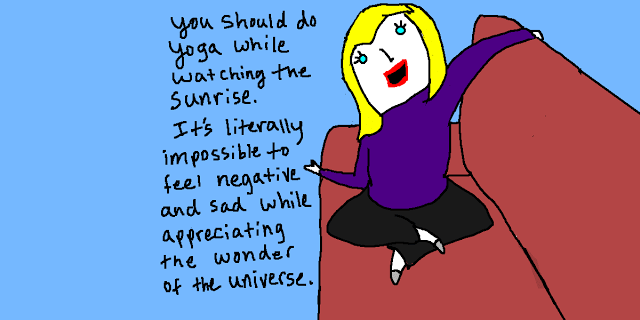 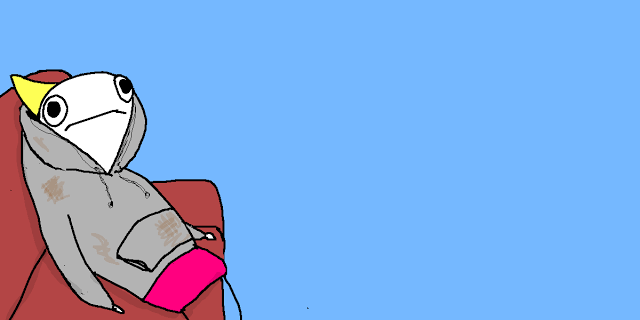 Along with misunderstanding Brosh’s condition, friends would try to start up bizarre philosophical debates about how great life really is. The idea behind this is to persuade Brosh out of depression as though it is simply a negative viewpoint. Just take her out to nature and she’ll remember all the nice things about life!

However, depression is not just a negative viewpoint. It is an illness, one that warps a person’s perceptions and interactions with reality. In the first depression comic in HYPERBOLE AND A HALF (“Adventures In Depression”), Brosh depicts negative self-talk, a common symptom of mental illness wherein someone consistently verbally abuses themselves, often over minor mistakes. She yells at herself for absurdly mundane things, such as eating pasta and stepping outside, quite convinced that these actions make her a horrible person. If it were anyone else, it would be obviously terrible to yell at someone for looking sad while eating, but normal logic does not apply when she thinks about herself. 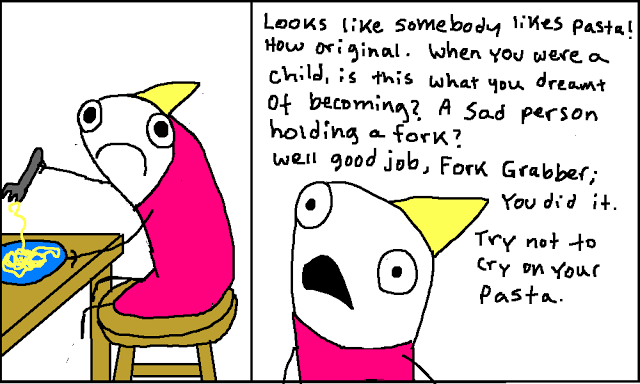 And these warped perceptions can expand outward. In “Depression Part Two,” Brosh cannot enjoy bowling because she starts questioning why she is doing it and, from there, what is the point of doing anything. Also, through distorted reasoning that she cannot even remember when creating the comic, Brosh finds a piece of discarded corn hilarious because it reminds her of how lonely she is.

You cannot go up to someone in a state like that assuming this is a debate where you can change their opinion. It’s not just a disagreement. Depression operates on a level completely separate from anything you’d use in a debate. In fact, someone with depression might know in their brain that your points are valid, but everything else inside of them won’t allow them to accept it at that time.

3. Panicking the second the word “depression” comes up 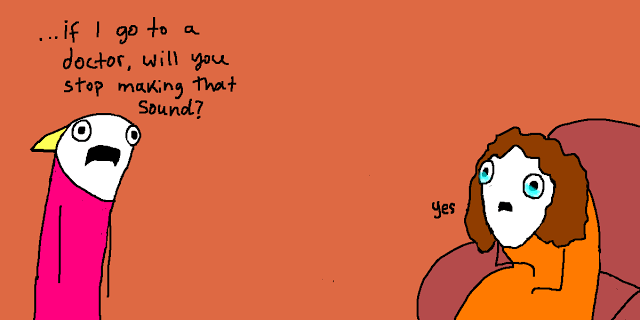 For a long time, Brosh dismisses her depression as a mild issue that she can simply live with. It’s only when she begins having suicidal ideation that she finally acknowledges that she has a legitimate problem.

However, when Brosh tries to ask for help, friends become extremely emotional and start to panic, fearing for her safety. So Brosh devotes tons of time to figuring out how exactly to bring up the topic without hurting anyone else’s feelings and how to care for others when she invariably upsets them with the news.

This is a lot for someone who has so little energy due to depression that she can hardly do laundry or shower.

It’s hard enough when you’re depressed to open up in general. When you’re constantly trying to prove in your own head how terrible you are, talking about depression seems more like whining and burdening people who don’t deserve it.

If a depressed person does finally talk about it and the instant response is to treat it like a worst-case scenario, they will feel even worse than before. They might take on a caretaker role, trying to dismiss what they’re going through to make you feel better. Or they might panic right along with you. Either way, it’s a lot to put on someone who’s just barely holding themselves together. Staying calm is crucial in a situation like this.

4. Comparing their problems to those of others 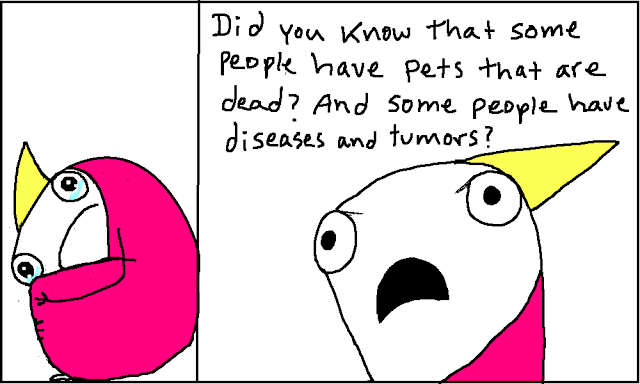 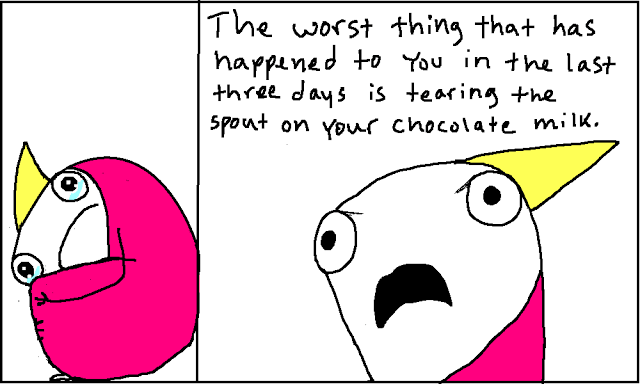 Nobody actively does this one to Brosh except herself. However, she has clearly internalized a comparison that our society loves and uses it to berate herself.

It is incredibly common for people to dismiss one person’s suffering through a comparison. There are ads featuring disabled people working out with captions like “What’s your excuse?” Or scoldings like “What do you have to be sad about when there are starving children in [insert recently imperialized nation here]?”

On the one hand, it dismisses anything legitimate a person from the more privileged group might be emotionally responding to (i.e. rape culture or racism). Plus, by reducing any discussion of mental health down to “whining,” it silences people who already go out of their way to view themselves as worthless.

On the other hand, it patronizes the less privileged group, setting them up as helpless without the assistance of the more privileged group. That sort of portrayal allows for those already in control (i.e. imperializing nations and corporations) to justify their power over the less privileged group. Of course we have to go over there and set up puppet governments and sweatshops! Those people could never run their own country without us. See? Their children are starving. Now eat your broccoli, sweetie. Never mind that most imperialized nations were doing just fine before European/Euro-American involvement.

Dividing people in this way does not cheer up a depressed person and it does not help whatever marginalized group you try to bring up. Don’t do it. 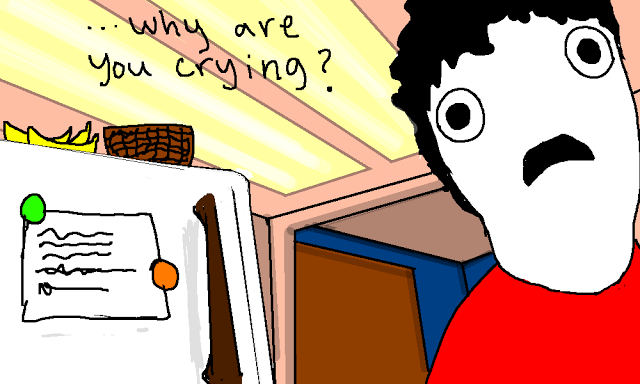 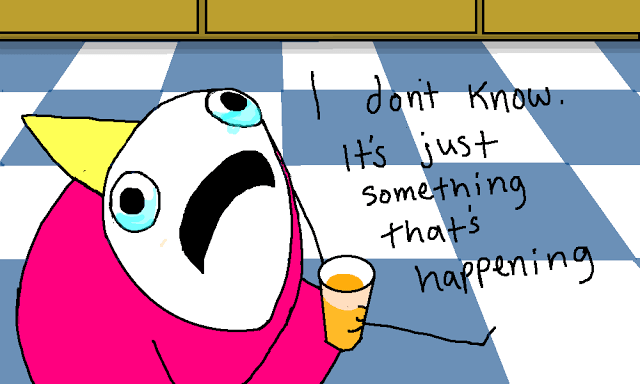 Yes, depression is primarily a mental health issue. However, just because something is in your head doesn’t mean it’s not real.

Even if a depressed person consciously knows that something they’re saying doesn’t make sense, they’re still going to feel it. For instance, Brosh is definitely aware of how ridiculous her negative self-talk about eating pasta is, at least enough to joke about it in a comic. But her thoughts still leave her in tears. Saying depression can be solved through willpower alone trivializes the issue.

Plus, as with many mental illnesses, depression can have physical effects on the whole body. In “Adventures In Depression,” Brosh describes crawling slowly across the floor sometimes because of how sad she is. In addition, she lays for two weeks on top of a pile of dirty laundry and leaves dirty dishes on the floor. This is all because, even though she can technically still move, she does not have the energy to bring herself to move. And so all these seemingly simple tasks become extremely difficult.

It’s hard to remember that it’s “all in your head” when your legs barely work anymore.

READ: Here’s how depression has influenced the work of David Bowie, Kendrick Lamar, and Radiohead!

With all that being said, there are definitely ways you can be helpful when someone opens up about depression!

Allie Brosh wasn’t really looking for solutions or cheering up. If her friends had listened to her and stopped thinking they knew better, they would have noticed this. She’d just been holding a lot up inside of her and needed to get it off of her chest.

If someone tells you they’re depressed, you might not know right away where they want to go with the conversation. Maybe they do want advice. But maybe they just need someone to vent to without judgement. And that’s a much easier role for you to fill than trying to be their savior or advisor.

So maybe give them a nice hug or some ice cream, and just let ’em vent.

2. Say what they mean to you

Depression makes it difficult to know how other people perceive you outside of your own head. It’s hard to remember people actually like you when you think you’re a dirty “fork-grabber.” In fact, often, depressed people will assume that nobody enjoys their company.

Let your friend know all the things you like about them.

They may not believe it during that conversation, but it’s something they might remember next time their depressed thoughts try to convince them that nobody likes them.

Remember: you don’t have to rescue a person with depression. Just be their friend.