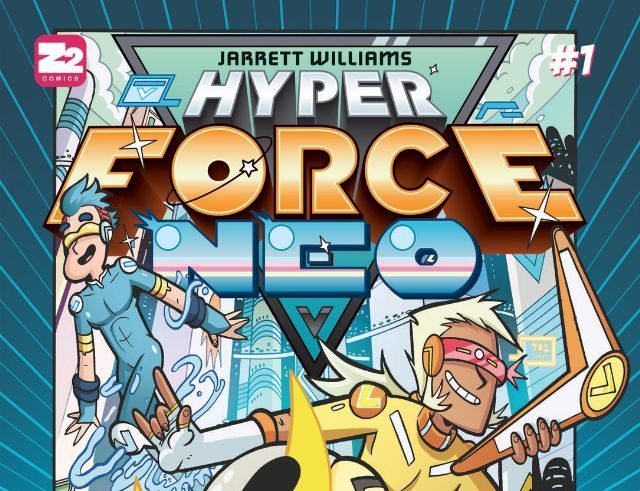 HYPER FORCE NEO, is a new kids title from standout Independent publisher Z2 Comics and writer/artist Jarett H. Williams.  It resembles a 21st-century kids show to a tee, for better or worse.

In HYPER FORCE NEO, it is the year 21XX and Dean Masters is starting ninth grade. Along with his friends, Dean forms Hyper Force Neo, a mech force that protects Sigma City from nefarious aliens known as the Dark Edge. Dean is helped by his two friends, Neil Tran, the new kid at school and a master sprinter, and Layla Yu, whose skills at the arcade are without equal.

Like Scott Pilgrim before it, HYPER FORCE NEO is chock full of video game and manga inspired jargon to tell its Sentai-inspired story. Although the first issue lacks the visual flourishes to enhance these terms, it’s full of amazing little details like text conversations and character infographics that help flesh out the world. Sigma City might be overwhelming to some but it’s definitely vibrant and awe-inspiring. Williams’ character artwork is fantastic.  When Dean decides to share a cafeteria table with Neil on the first day of school, they form an easy, genuine friendship that kids will immediately relate to for its purity.

While children will find lots to love in William’s dynamic and colorful artwork, the panels’ arrangement and word placement creates a somewhat schizophrenic vibe. This sensory overload feels built for animation, and while extremely dynamic, it suffers a little when processed on a page. The super-sized length of the first issue definitely adds to this feeling and can make following parts of the issue difficult. 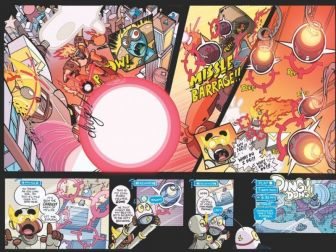 Like many inaugural issues, HYPER FORCE NEO introduces numerous characters and plots with little payoff, setting the stage for future issues. Neil and Layla will most likely join Hyper Force Neo, aiding Dean in his quest for justice.  Although its colorful kinetic imagery might cause minor headaches for adults, HYPER FORCE NEO will most likely enthrall younger readers.