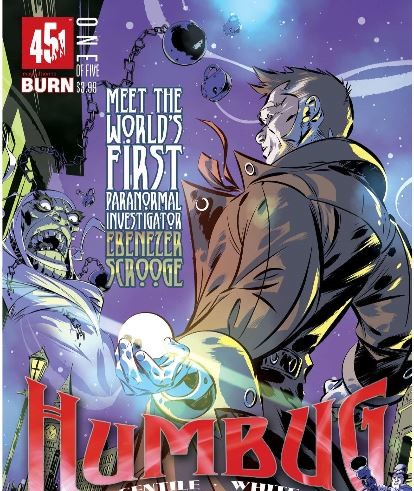 It’s that time of year when it gets colder, the nights get darker, and people around the world prepare for one of the most magical times of the year — Christmas. With this in mind, 451 Media produced a festive treat that blends the holiday season with the paranormal!

Marley was dead: to begin with. There can be no doubt about that.

So begins one of the most well-loved Christmas tales of all time, A CHRISTMAS CAROL. It deals with themes of redemption, regret, and what the true spirit of Christmas is.

If there’s something strange, in your neighbourhood, who you gonna call?

So begins one of the most iconic theme songs of one of the most popular and funny films of the past thirty years, GHOSTBUSTERS. It deals with the supernatural, good, evil and how to effectively bust all kinds of ghosts!

Why quote Dickens and Parker Junior, you ask? Let me introduce you to a little comic called HUMBUG, and maybe you’ll understand a little bit better.

LISTEN: We have more supernatural adventures with Dirk Manning, creator of TALES OF MR. RHEE! 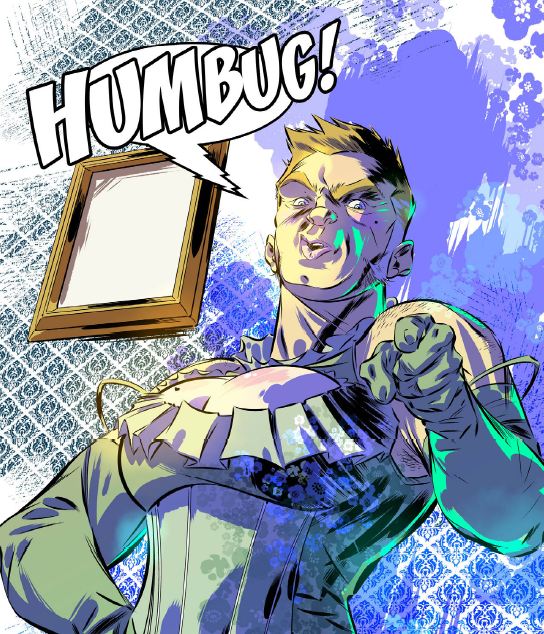 Over the past year, there has been a real surge in taking famous literary characters, long in the public domain, and giving them a unique twist.  THE STEAM MAN, from Dark Horse Comics, is the freshest that comes to mind, where classic literary figures are re-invented. Still, who would have guessed that A.J. Gentile and Cosmo White would construct a world such as this around Scrooge, a man who learned the true meaning of Christmas? Yet in a way it makes glorious sense; Scrooge had supernatural dealings — not only with three spirits, but Marley’s ghost as well. He knows that the supernatural is all too real.

READ: Other literary heroes get re-invented in our review of THE STEAM MAN #1!

Some would say it shouldn’t work, but it wonderfully does work. Scrooge is still an unbearable old curmudgeon, his character traits haven’t changed that much, and his love of money is kept just at bay. But this man now has a purpose and is respected. He is surrounded by a family who cares for his well-being and works with him as paranormal exterminators. His nephew Fred, Bob Cratchit, and not-so-Tiny Tim are part of his team.

He acts like a cross between Sherlock Holmes and Peter Venkman, with the physical bearings of Daniel Craig’s Bond if you added a few years. A.J. Gentile balances a fine line between the absurdity of the story, and having you fully invest in Ebenezer Scrooge, Ghost Buster! His dialogue jumps between Dickens-like prose and modern slang, without it managing to ever feel out of place. There are puns galore that are purposefully groan-inducing. The story easily sets up what Scrooge and his Humbuggers do. Their ghost capturing process is quite clever, and the scene in the Opera House where it is put into practice is full on fun.

Then, recognisable ghostly chains drift down from the ceiling, but that’s for another review! READ: Get into the festive spirit with our review of KLAUS #1!

Cosmo White draws what I can only describe as a full-on romp. Each page and panel keep your eyes moving, the art full of ectoplasmic energy that adds a haunted aura to it in no small part due to colorists, Jason Cardy and James Statye, who add an eerie greenish glow to White’s art that always hints that the paranormal is never far away. White’s character designs are fun too. It was no accident I mentioned Daniel Craig before as Scrooge looks like an even craggier version of him (if such a one can exist) while the ghosts are surreal and sticky.

It works very well as a limited series, and I hope that the rest of the issues delve a bit into Scrooge’s past to see how he went from a spirit of Christmas to a cynical investigator of the paranormal.