My high school was two towns over from my house. My town wasn’t big enough to have its own high school, so most of the middle schoolers chose to go there once they hit high school age. The high school had a lot of kids from surrounding towns; a holdover from when it had officially taken kids from the area. Even though there were generally three to four towns represented in the school, there was one thing that all the outsiders agreed on — the ‘native’ kids were spoiled. Not that they were rude or looked down on outsiders (any more than normal high schoolers), but they were given special preference, usually from their parents. There were stories of parents who didn’t let their kids get jobs and bought them everything, or others who interrupted awards ceremonies because their kid didn’t win. While I can’t recall seeing anything that blatant, it was my first introduction to the term ‘helicopter parent’ — those parents that hover near their children, protecting them from all the problems of the world.

Why bring this up? Because sadly my high school experience is a fairly accurate example of how my generation is viewed by the older ones. I have no doubt that there were children of helicopter parents in my school, but never once did I believe every kid there was. Yet the entire town’s student population was seen as spoiled. Fast forward to today, and my generation, the millennials, still endure that stereotype. Ask any older person about the problems with millennials, and what invariably comes to the surface is the belief that we were shielded by our parents and never broke away from them, running home every time the world was mean or unfair. I’ll fully admit that there are kids and young adults that do this — I’ve seen it myself. Yet like all stereotypes, it judges the whole by the actions of a few.  And sadly, it’s one that’s not going away anytime soon, which is why I’m grateful for the announcement of Hulu’s newest series, RUNAWAYS.

Horrified at this revelation, the six children ‘runaway’ together, all the while learning the truth about their parents’ legacy and their own abilities (for example, mutant Molly is super-strong, while Karolina can transform into a light-based alien). The early issues of the comic dealt with the kids learning how to survive away from everything they’d ever known, while also deciding who they are and how to take down their parents.

The reason why this series matters is plain. It’s a chance for millennials to see kids their own age not only actively break away from their parents but have to rely on themselves to survive. The metaphor of growing up is quite blatant, but with today’s stereotypes, it needs to be. Everyone goes through the process of deciding who they are and what they want to be. It’s a decision that can only be made by one person alone, and not by or for their parents. The members of the Pride are shown making that decision for their children, as they were formed by a group of celestial beings and told that in return for success and power, six of them would be allowed to survive the ‘cleansing’ of Earth. As their children were born, the Pride stopped fighting each other and worked to give their children their ‘slots.’ Again, it’s the parents who are trying to actively shape their children’s lives. However, now they are painted as villains. The effect is so strong that the Runaway’s motto is “never trust adults.”

READ: Like RUNAWAYS? See why Marvel’s newest teenage superteam CHAMPIONS is so important

There’s more symbolism in RUNAWAYS that proves not every millennial fits the stereotype. The children accept all the perks of their parents’ success until they realize just who their parents are. This causes instant rebellion in the teens, which is what older generations argue doesn’t happen in millennials. The stereotype says millennials are so cared for by their parents they don’t ever learn to be their own person, which is NOT the case in RUNAWAYS. 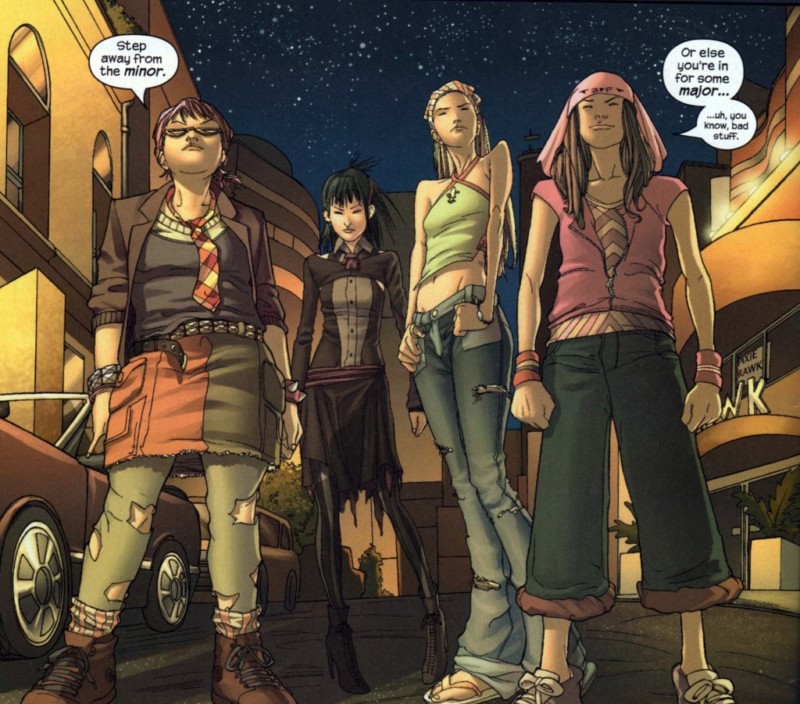 Yet, even more, the entire series is a metaphor for a powerful moment of childhood that shapes us as adults — when we realize our parents aren’t perfect. Ideally, we don’t realize our parents are master criminals, but we start to see that they do have flaws — they can be stubborn or selfish, or have beliefs that we come to disagree with. Once we see that, we realize that we have the potential to act that way (or maybe already do). That’s when we make the choice to both accept our parents’ flaws and move past them. The Runaways obviously do that, but they even take it farther as *SPOILER* the one Runaway that does want to be like their parents is demonized and eventually locked away because of it. It’s a direct indictment of the stereotype — these kids aren’t looking for guidance, they’re looking to get as far away from their parents’ influence as possible. Even if they will always be their parents’ children (and use their parents’ gifts) they will survive on their own, on their terms.

READ: Want to see other traits of millennials?  See how they relate with…. absurdism?

RUNAWAYS did change as the series went on, adding new members and changing character roles. Throughout it all, the Runaways stood as an example of how important becoming your own person was. Was it exaggerated for comics? It had a girl telepathically bonded to a dinosaur, so hell yeah. But if they had heard anyone going on about their generation being dependent on their parents, they would have laughed, beaten them up, and kept on walking. That’s what growing is supposed to be like — learning who you are away from your parents and never just falling in line with their views for you.

God, I wish this series had been out back in high school.