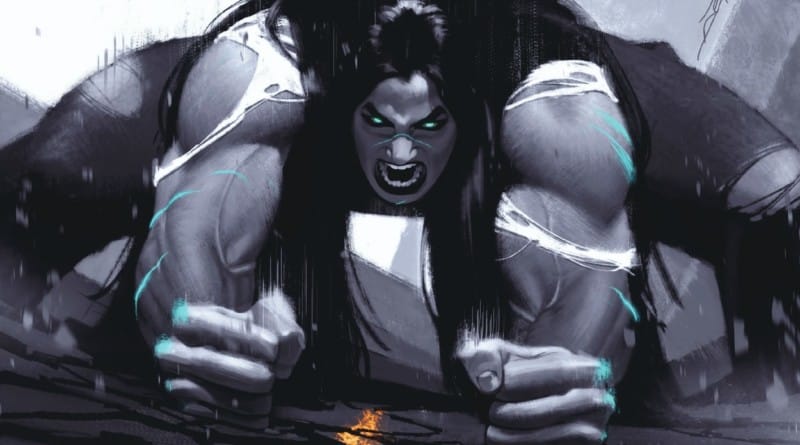 While the last couple issues of the series have been slow-moving, HULK #5 picks up the pace. In this dynamic issue, writer Mariko Tamaki both ramps up the tension of the main storyline and delves into Jennifer Walters’ past with a flashback to her hospital stay following CIVIL WAR II.

Artist Nico Leon and colorists Matt Milla and Andrew Crossley render Tamaki’s story with solid, clean artwork. Despite some creative imperfections, HULK #5 is a solid issue that brings some much-needed excitement to the series.

Previous issues have followed Jen as she, hoping to live a normal life, resumes her work as a lawyer. Her first client, Maise Brewn, is a meek shut-in looking for legal help with an eviction notice. When Jen accidentally provokes Maise’s landlord with threats of legal action, Maise takes problems into her own hands. Drawing on latent supernatural powers, she murders her landlord and then two detectives investigating his death. At the end of HULK #4, Jen comes to Maise’s apartment to calm her down but instead provokes her to summon a demonic monster.

This issue, however, begins with a flashback in which Captain Marvel visits Jen as she recovers from Thanos’ attack. While not explicitly related to the main storyline, this episode grounds us in the trauma that persistently plagues Jen. After Jen’s emotional conversations with Captain Marvel and a hallucinated Bruce Banner, we flash forward to the present. Conflict is imminent: police have broken into the apartment complex, and Maise has summoned a host of monsters in defense. We don’t see much fighting here, but this issue sets the stage for an all-out battle in next month’s installment.

Looking for more Hulk books? Check out our review of THE INCREDIBLE HULK: FUTURE IMPERFECT!

Excitement and Emotion (Most of the Time)

Finally moving outside the confines of Jen’s lawyering, HULK #5 starts to deliver the thrills we expect from superhero comics. Filled with movement, some pages are bound to get your heart rate up. It does, however, still read like a set-up for the following issue. There are only a couple panels of fighting, and (SPOILER ALERT!) we still don’t see Jen turn into the Hulk.

Even though HULK #5 delivers more plot than the previous issues, Tamaki still gives us poignant character moments. The opening scene, one of the most emotional moments of the series so far, delves into Jen’s psyche. Likewise, Maise’s speech at the issue’s climax beautifully conveys her fear and anger. In the more action-packed sections of the book, though, the writing becomes rather bland. As the pacing demands that there be fewer words in each panel, characters often state the obvious with tired phrases we’ve seen a hundred times before. Jen’s internal monologue, which has been exemplary in previous issues, falls into the banal “hero making snarky comments while being threatened with mortal danger” trope all-too-prevalent in comics today.

It’s All about the Details

There is a lot to love about the issue’s art, but it suffers from an inattention to detail. Nico Leon’s characteristically clean penciling strikes the perfect balance between precise and stylized, but his facial drawing is sometimes asymmetrical. Most notably, there are numerous panels in which the character’s eyes are different shapes or sizes.

Likewise, Milla’s and Crossley’s coloring makes many pages pop but makes others awkward with obvious Photoshop usage. Many backgrounds and buildings are shadowed by unrealistic-looking gradients, and the digital blurring of the writing on the apartment complex’s walls is incongruous with the rest of the artwork.

Although not without faults, HULK #5 is a lively and moving issue that gives me hope for the series moving forward. The plot is becoming more engaging, and, judging by the character moments we get in this issue, there is no doubt that Tamaki’s Jennifer Walters is complex and exciting enough to fill Bruce Banner’s shoes (if the Hulk wore shoes, that is). Upping the tension and building our emotional ties to the characters, HULK #5 is a satisfying comic that sets up for a riveting finale to the story arc next month.