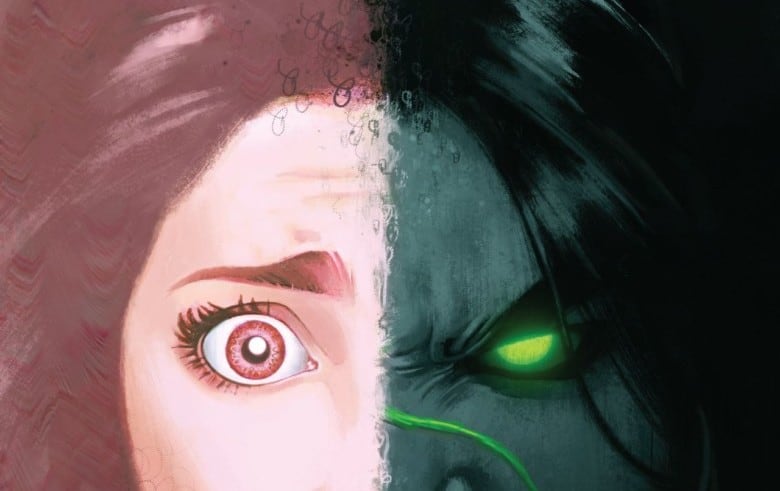 HULK #4 is part of the beginning stages of what’s hopefully a nice long run. So far, what we’ve gotten is a refreshing new story with some of Marvel’s best and brightest tasked with bringing it to life. Writer Mariko Tamaki along with artists Nico Leon, Matt Milla, and Jeff Decal have created something with a uniquely retro feel. From the cover art to the panels themselves, this series prefers the approach of internal hero monologue versus the hero being thrust instantly into action. I really enjoy a story that shows the hero going about their normal routine, or at the very least, a story that gives the reader a glimpse into what’s going on in the hero’s daily life at that point in time. The creative team behind the newest HULK series does a great job of detailing the life and background of Jennifer Walters aka “She Hulk.” With all of that said, however, this series could benefit from adding more action and excitement throughout the story. 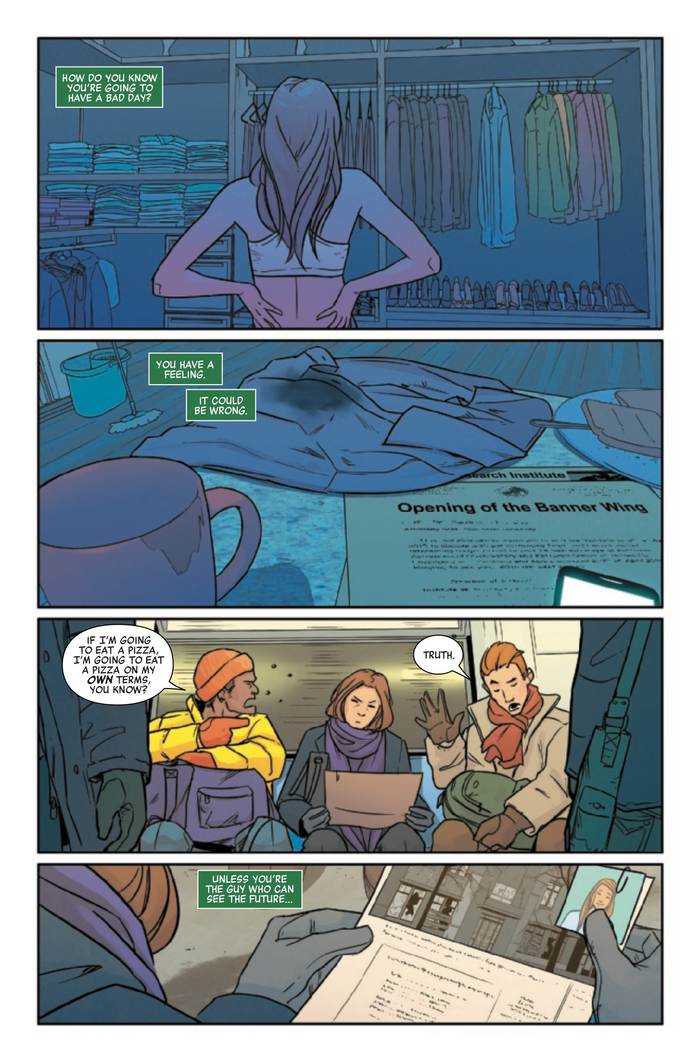 The artwork in HULK #4 is very detailed, but not over the top. The panels are much darker in contrast to most modern day comic books. The artists use a lot of grays, light blues, and softer primary colors to give us, again, a very retro look and feel here. I think that meshes well with a series like this, especially when we consider how light-hearted it can be at times. This series makes up for its lack of action at times by giving us a lot of character backstory and consistent storytelling from start to finish.

This issue deals with a very real and serious issue in most impoverished areas: eviction. Jen Walters has taken on Maise Brewn as her first client as a lawyer. Maise hired Jen to protect her and prevent her landlord Tick from selling the property she lives in to a developer looking to turn a quick profit. It sounds like something you might read about in a newspaper or see on television. That’s why it works as a storyline here in comic book form. That’s also why Jen is concerned about Maise however. She knows that Maise had an incident that ‘changed her’ in a very powerful way. She knows that Maise may be taking matters into her own hands. Throughout HULK #4 we see just how desperate Jen is to try and not only save Maise from eviction, but save her from herself as well. Jen Walters may be the Hulk, but even she doesn’t seem prepared to face whatever Maise has become.

READ: New to the series? Read our exciting review of HULK #1 and see how everything started!

Throughout HULK #4 we see Jen Walters trying to figure things out. She wants to figure out how to help her client, she needs to figure out where she is, she needs to figure out how to stop developers from demolishing her client’s home (which will affect her client’s neighbors as well). I thought this was a very cool way to express Jen Walters’ intentions and underline why she’s doing everything she’s doing. She may be a lawyer by day, but she’ll always be The Hulk. In the end, she’s still going to do what all heroes are meant to do, and that’s ‘make a difference.’ 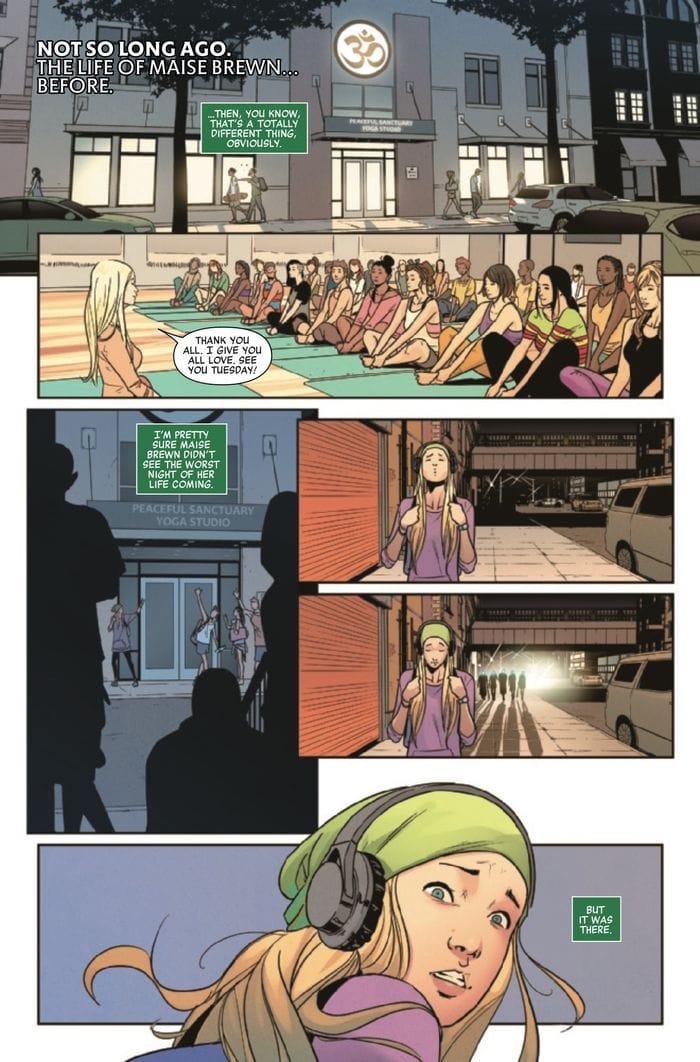 Sometimes, all it takes to make a comic book really pop for the reader is to add some drama in between the pages. Giving us a straight line from start to finish where we get some consistency but nothing else to liven up the plot? That just makes for a stale read. You’d almost be better off skipping to the end of the issue in those cases. Luckily here, it wasn’t that bad. Again, I really enjoyed this issue, but we’re also only on HULK #4. I could definitely see things getting stale really quick by issue #10 if things don’t start to pick up. Thankfully, things look to be picking up in issue #5! 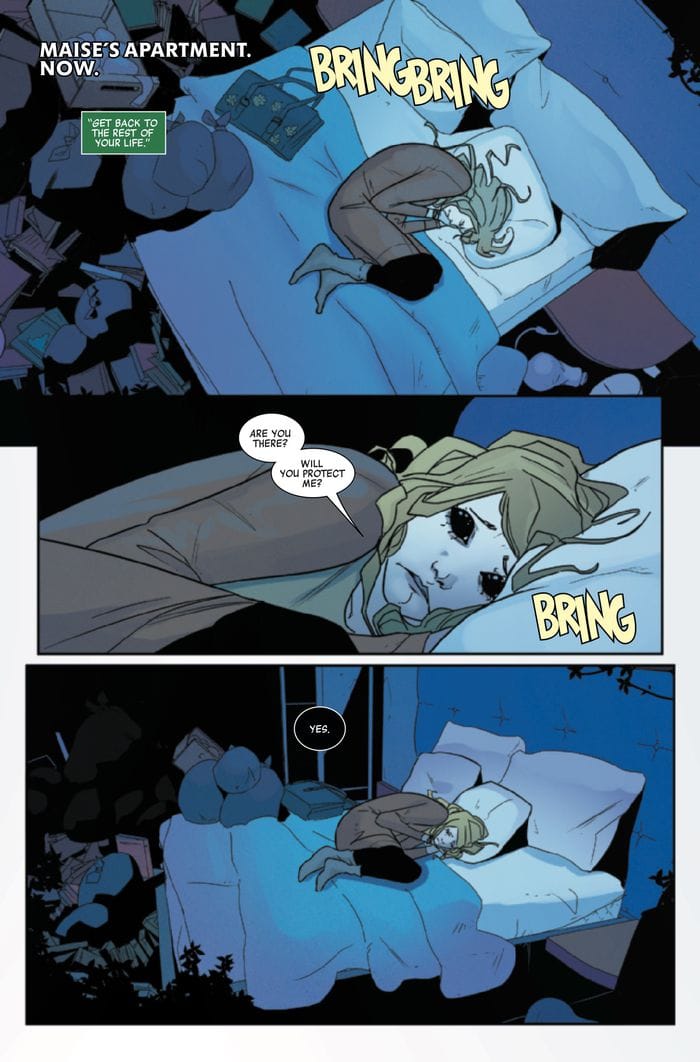 Somewhat early on in the issue, we get much needed cutaway panel that explains some of the supernatural trauma Maise Brewn went through on her own worst night ever. This explains Maise Brewn’s transformation into the creature she would become. We also get Jen Walters internal narrative essentially explaining why she is so eager to help on this case: Jen Walters was asleep when she first was transformed into the Hulk. Maise Brewn on the other hand? She saw her attackers, and no one was able to help her when it happened. The cutaway to Maise Brewn laying in bed, eyes wide open, asking for help says it all. Maise Brewn is a scared girl who was unable to prevent what happened to her. I really enjoyed this part of the story, and thought it was a wonderful way to further along character development.

My only real complaint is that I’d like to see some kind of subplot added to the story. I feel like that could’ve broken up the monotony a bit and give the overall story some added dimension. If you’re going to have a slow build up to a reveal by the issue’s end, that’s fine. But a subplot or two would definitely give this series the added elements of intrigue that I feel could keep the readers’ attention more. As I mentioned before, a good story should never be just point A to point B. As much as I love seeing heroes depicted in their daily routines, I would get bored seeing Iron man and Captain America drinking frappucchinos and talking politics for half of the story. You should always have something in the story that gives the reader more to think about. That way you not only keep the reader’s attention, but you also keep the reader coming back for more.

Overall, I enjoyed HULK #4. While there wasn’t as much action I usually prefer in Marvel comic, the narration from Jen Walters was a huge plus, as was the retro art. I think Mariko Tamaki is doing a great job with this series, and if he is able to add some subplots and action into future issues, this story is only going to get better.