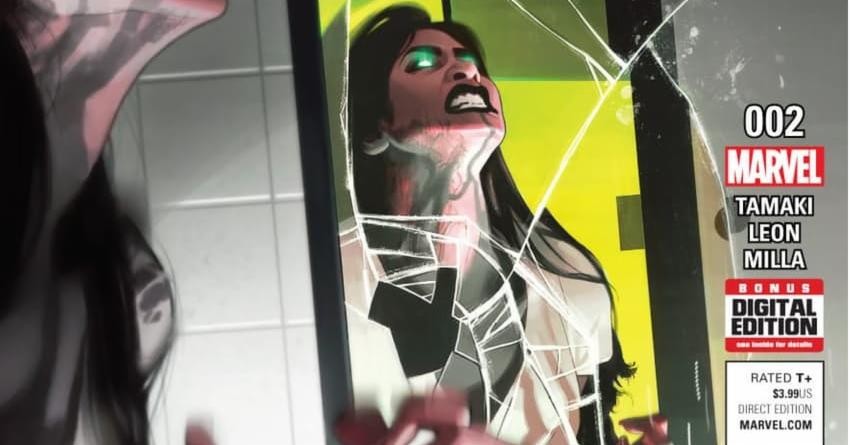 In the last issue of HULK, we saw Jennifer Walters awaken from a coma to not only learn that Bruce Banner is dead, but that she has undergone another transformation. Her She-Hulk form has vanished, leaving her in her human form, but with a raging monster inside that could come out at any moment. HULK #2 shows Jenn dealing with that loss of control and leaves the reader wondering just how far this change really goes.

At first, Jenn seems to be herself. She goes through her daily tasks, including returning to work and going to confront the law-breaking landlord of her newest client, Maise.  Yet even as she performs everyday tasks, Jenn cannot stop thinking about how ‘normal’ it all feels, while admitting that thinking about everything that way means there’s something else over the horizon.

READ: Want More Hulk in your life? Take a look at our review of TOTALLY AWESOME HULK #1!

Even so, Jenn also demonstrates remarkable control dealing with the law-breaking landlord she’s serving, despite various sexual comments and threats insults thrown her way. Even Jenn’s threat to an equally insulting tenant comes off as normal, but in any Hulk book the monster is never far from the surface, and we start to see it when Jenn watches children in the park playing a violent game of superhero, with a villain that’s fairly easy to guess. 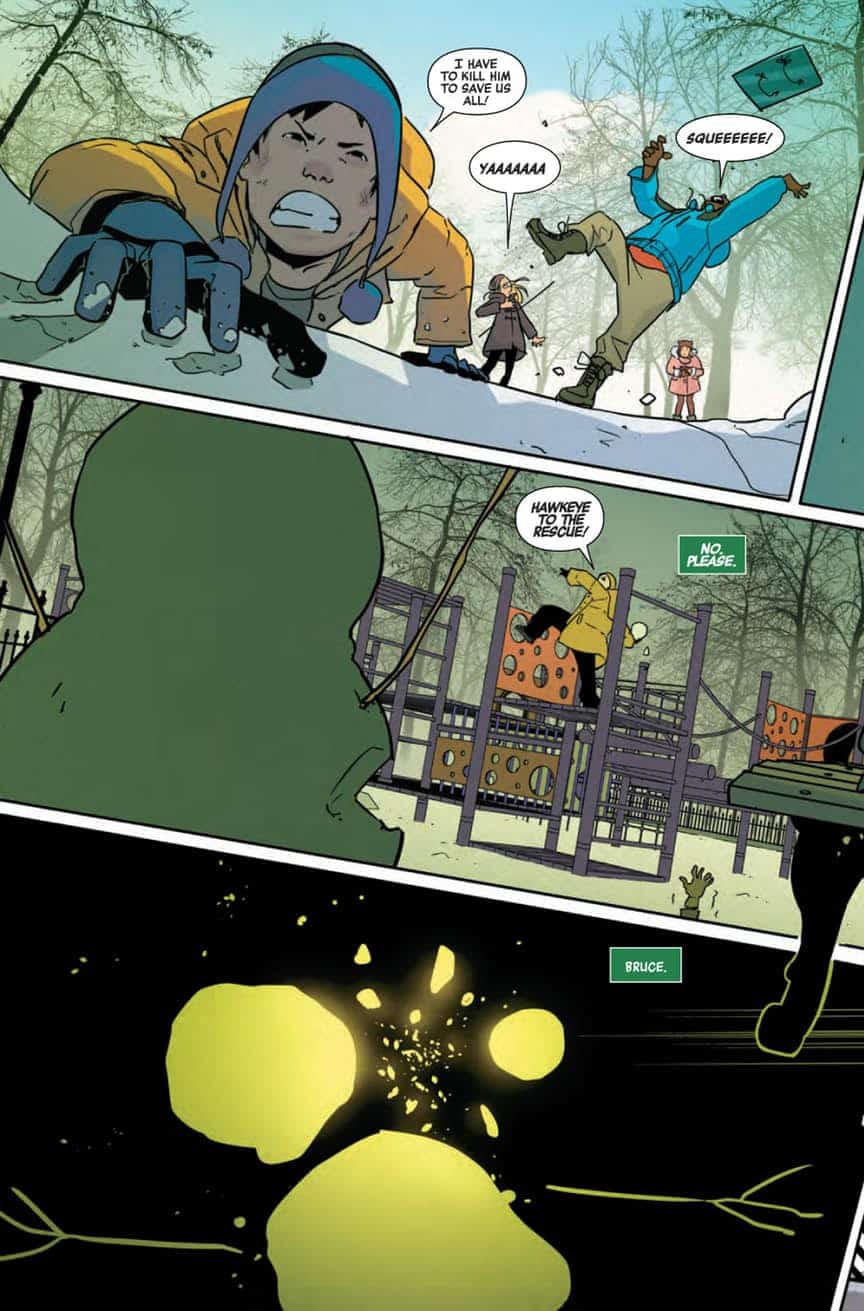 It’s this event that sets off Jenn’s anger, but it stands as an important difference between her and the traditional Hulk. Mariko Tamaki’s smart writing paints Jenn as someone who suffers more from personal pain than outright insults. It makes sense given Jenn’s work as a lawyer (which requires emotional control), but it also adds a new dynamic to what could’ve been another tired Hulk story about a monster hiding inside a person. It continues to define Jenn as separate from the Hulk; Geoff Johns’ story HUNT FOR THE SHE-HULK (where Jenn also suffered from more traditional Hulk-Outs), made it clear fear is what set off the transformation. So making the trigger more personal fits into Jenn’s own history while adding a new wrinkle. 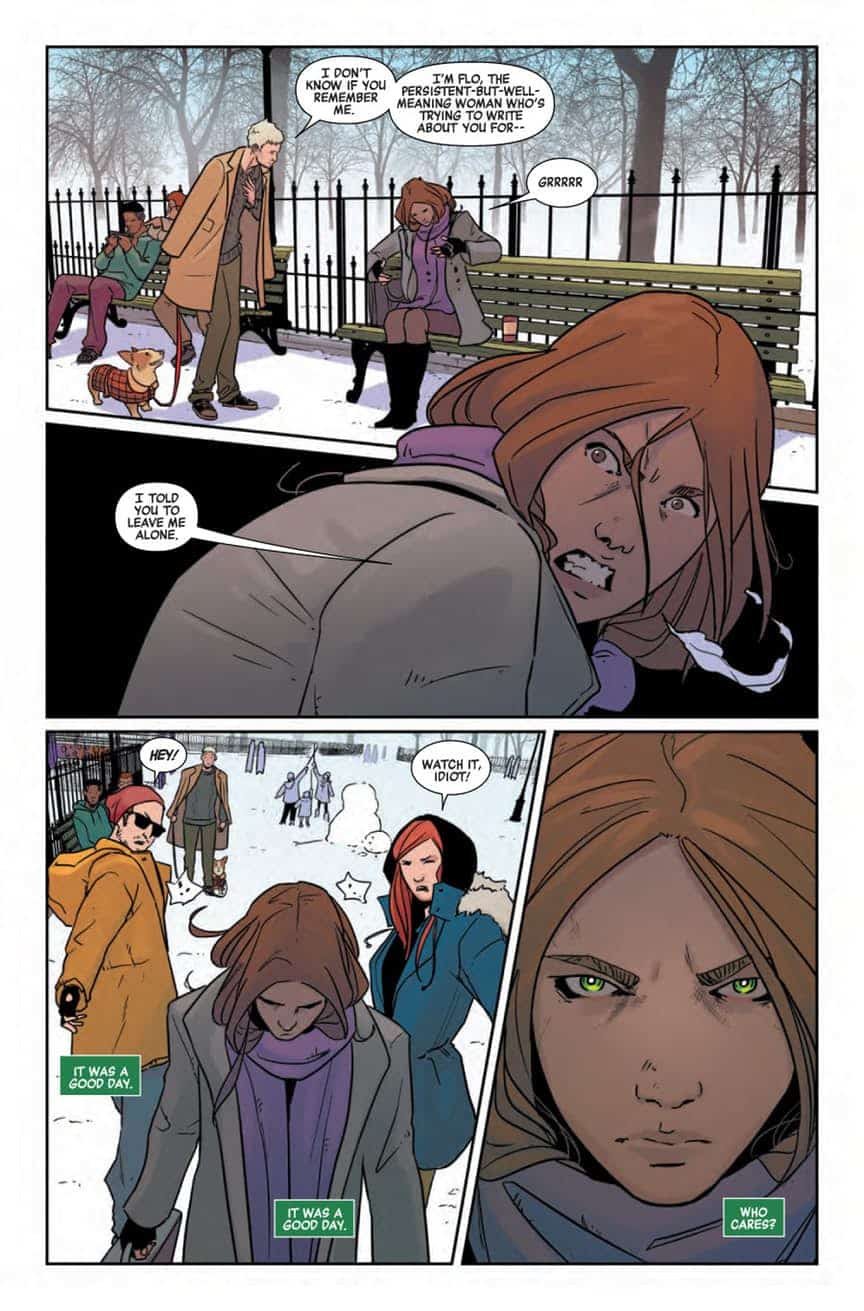 Once the trigger is hit, however, Jenn is forced to rush back to her office, locking herself in and desperately trying to calm herself with a cooking video, even as she rips apart her briefcase doing so. Because of her unavailability, Maise (who’s a recluse, terrified of leaving her apartment) is threatened further by her landlord, while a mysterious hidden figure promises to “protect” her from harm.

The artwork really shines in this section as Nico Leon and Dalibor Talajic shift their their previously well-lit and colorful panels to fittingly dark tones. The shift highlights the tonal changes of the story, especially in the scenes where Jenn’s assistant Bradley is able to coax her back into the light after her break. The relationship between the two is further cemented when Bradley offers her his shoulder concerning Bruce’s death (Bradley lost his brother earlier in the year). It’s a nice gesture and also good to see a gay man be painted as a strong shoulder for Jenn without seeming stereotypical and flamboyant.

READ: Want to hear more about LGBT themes in comics? Here’s our roundtable discussion of LOVE IS LOVE!

The issue ends with opposing shots of Jenn and the landlord walking home in different directions, but both feeling as though they’re being followed. Only the landlord, however, is threatened by a large, vaguely Hulk-shaped figure. This raises many questions, including if this creature is what Maise was speaking too. It may also indicate that Jenn might be transforming and blacking out about it, even to the point of remembering different events.

HULK #2 is a strong issue that continues to build on the transformation of Jennifer Walters. The story tackles themes familiar to Hulk fans but gives them twists that allow us to see reactions of a person who has, until now, never really had a monster to deal with. Jenn manages to be both strong and sympathetic, still being a strong lawyer but also needing help from those around her. The issue has a powerful conflict between Jenn and the landlord and creates a new character while leaving plenty of questions for the future. In short, this is an excellent story that continues building upon HULK #1 and should make anyone eager for HULK #3.