The OPTIMUS PRIME series is being integrated into IDW’s “Reconstruction” crossover event. This means that the Hasbro comics that participated in the “Revolution” crossover series — G.I. JOE, M.A.S.K.: MOBILE ARMORED STRIKE KOMMAND, ROM, MICRONAUTS, ACTION MAN, and TRANSFORMERS — now inhabit the same universe. OPTIMUS PRIME #1 opens with Earth getting annexed into the Cybertronian Council of Worlds by the titular character. The denizens of Earth now find themselves uneasy and wary of the Autobots inhabiting Earth.

Writer John Barber delves into Optimus Prime’s past when he was a cop on Cybertron and went by the name of Orion Pax. The story also jumps to the present with the Autobots rolling out to retrieve a weapon and to quell a riot. The Autobots hope to regain the trust of humans, first by meeting with President of the United States. 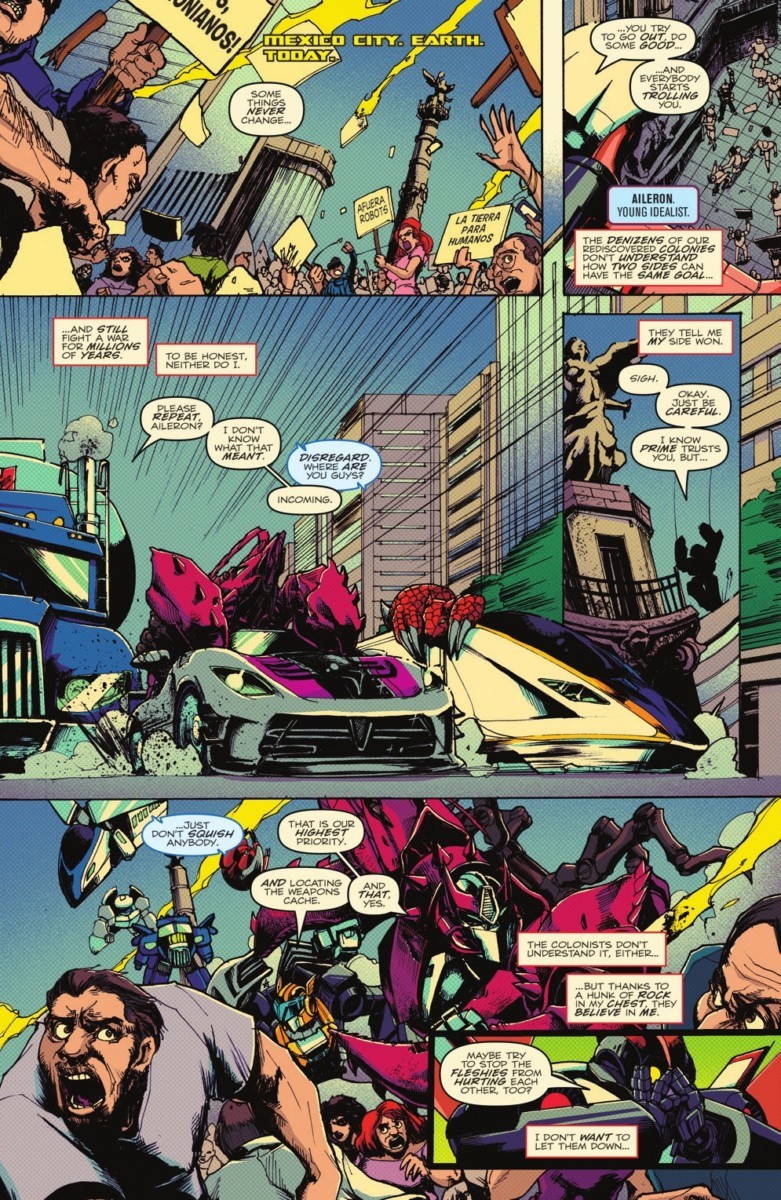 A theme that is present throughout this issue is the idea of living up to the expectations that come with being a leader with social status. Optimus Prime says that the name Prime refers to the legendary thirteen Primes who ruled over Cybertron and united the planet. However, the name was tarnished by corrupt leaders who took on the name during Orion Pax’s time. I think that theme resonates well throughout the issue because Optimus Prime feels a responsibility to reclaim the name for good. He accepts that while some might revere him as a leader, there are others who do not, but ultimately that is the weight that comes with being a leader.

In the past, Orion Pax tries to do the right thing and find the truth behind the mysterious murder of a bot named Hefter, which has Cybertronian society protesting en masse. It’s reminiscent of today’s issues with the Black Lives Matter movement and minorities turning up dead in police custody. It works well within the context of the story because the cops cover up the facts of what really happened to Hefter. If was it was Barber’s intention to make social commentary, this is evidently a case where art imitates life. I think this makes the comic more interesting because the Transformers lore has always been based on various historical civilizations and figures as well as systems of society, such as functionism being based on the caste system. What makes this issue successful is that it shows that past conflicts can recur in the present.

READ: Want recommendations for other IDW comics? Check out our review of DONALD QUEST #1!

The past and the present share parallels in the form of civil unease. Orion Pax is distinguished from Optimus Prime through some key visual distinctions; the former does not have a face mask and embodies the alt-form of a race car; the latter retains his iconic truck alt-form as well dons the face mask that he’s well known for. I found it fascinating that the younger Orion Pax conveys a wide range of expressions and emotions. He reminded me of hard boiled detectives such as Sam Spade from THE MALTESE FALCON in that trouble finds him. However, Orion Pax is naïve and more brutal than his older self, revealing a darker side to his character. It’s easy to relate to that because we’ve all done dumb things in our youth that in retrospect weren’t good decisions. This reveals a flaw in Optimus Prime: while be believes in justice, he’s a bit insecure about his leadership as the bearer of the Matrix spark, and is aware that another Autobot can easily become the leader of the Autobots. 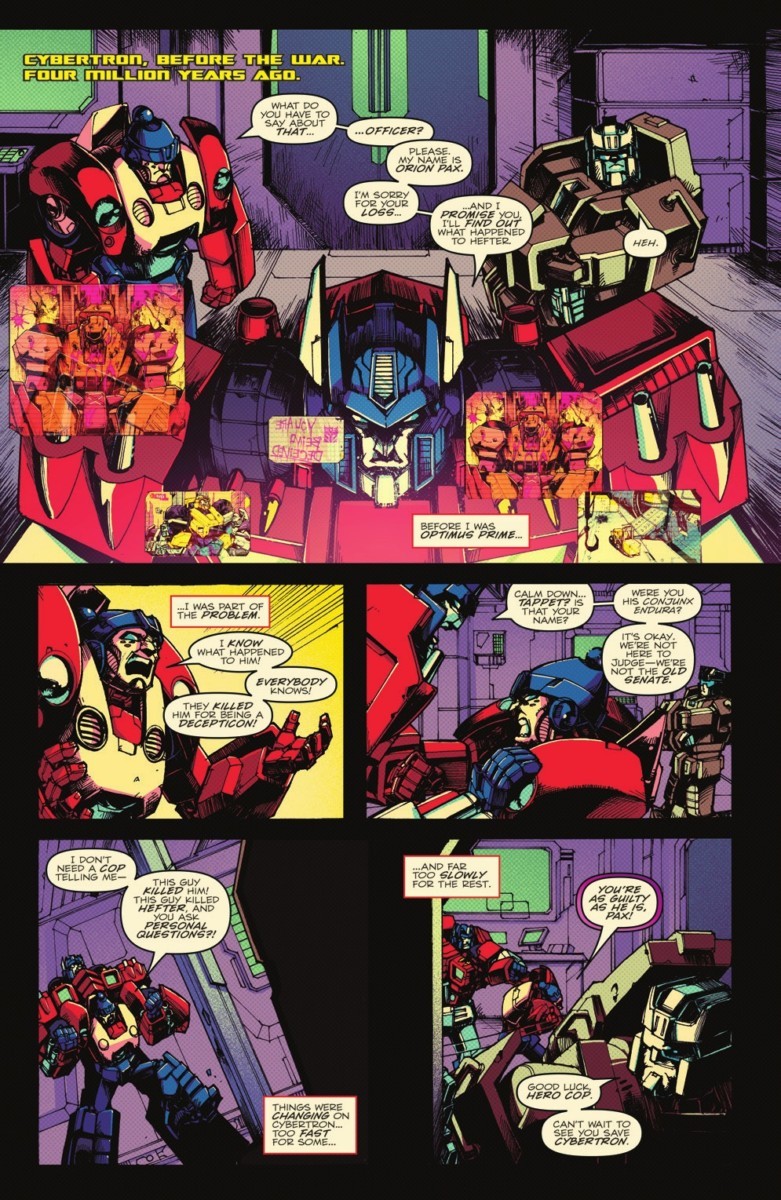 The art has an 80’s aesthetic and gels really well with the story. Kei Zama’s pencils and inks and Josh Burcham’s colors bring the TRANSFORMERS universe to life. Cybertron has a slightly washed out color palette that reminds me of film noir. In contrast, Mexico City and Washington DC have bright colors and daylight in the present. It feels like I’m reliving the 1980’s animated film and Stanley Bush’s THE TOUCH is playing in the background. The denizens of Cybertron are lovingly recreated and unique, coming in various shapes, sizes, and forms. You can feel the tension of the story and the action scenes immediately draw you in. OPTIMUS PRIME #1 has plenty of action as panels move at a frantic pace. I think what makes the art impactful is showing that Transformers bleed a violet liquid when they get hurt, which makes them that much more human-like. The art emphasizes how Cybertronians and humans are connected, which is through protesting, albeit with different signs, which I think vital to the story’s conflict. 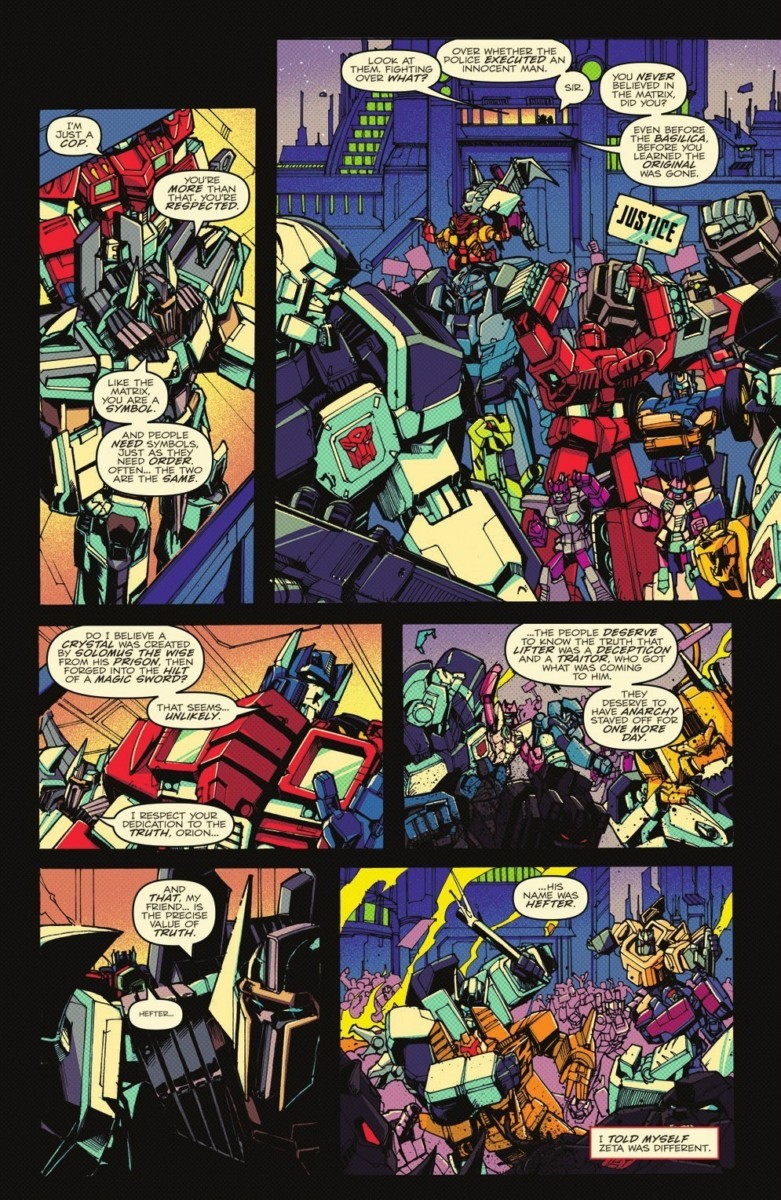 OPTIMUS PRIME #1 is a great introduction to the beginning of a new crossover comic book series. It explores the identity of the titular Autobot leader, introduces a new batch of inexperienced Autobots who see him as a messianic figure, and explores how the past is connected to the present. While the plot is a bit predictable, there’s no denying the layer of social commentary that’s underneath it and the cliffhanger sets up for something bigger. I’m looking forward to seeing how the other Hasbro comics tie into the bigger at story large when issue #2 rolls out next month.