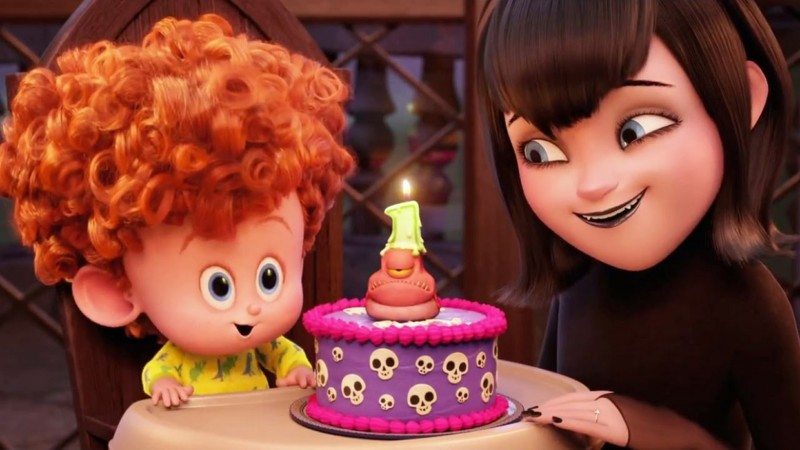 This is a kid's movie... But is it a babies movie too?

Half an hour into HOTEL TRANSYLVANIA 2, I turned it off. I didn’t want to deal with another hour of Adam Sandler and friends cracking jokes and with all the wit of a mountain troll.

A week later, the movie was staring me down reproachfully from my unfinished Netflix queue. I don’t like unfinished business. I challenged the movie once more.

HOTEL TRANSYLVANIA 2 is another entry in a long line of Hollywood sequels that were only produced to milk a few more bucks out of a popular name. I would be surprised if HT2 spent more than a month in development before being thrown to the studio to crank out ASAP. Everything about it, from the jokes to the script to the plot, feels unpolished as if the entire film never made it past the brainstorming phase before being thrown straight to production.

The jokes and gags are all crammed haphazardly into the film at random. A few good ones ended up in there, and I chuckled a few times. But in between those good ones were a whole lot of mediocre and downright bad ones filled the rest of the space.

And the plot? They never got around to figuring out what exactly the plot is. The first chunk of the movie is a confusing jumble of time skip montages and an angsty grandparent. Sandler also uses this opportunity to emphasize that any and all character development from the first film has been reverted. Drac is right back to being deceptive, selfish, and overbearing. Mavis is a soccer mom. And Johnny has turned into a meek yes-man.

READ: An intelligent, and surprisingly valid criticism of the wildly popular Skyrim

Recipe for a half-baked sequel

*If you can’t find any leftovers, feel free to omit altogether

Laziness at its Finest

That about outlines the three glaring issues with this film: flat jokes, unappealing characterization, and a complete lack of a coherent plot. Three undeniable symptoms of lazy writing. Had the writers taken the time to review and revise this film, with even an ounce of professional pride, it would have hit a lot harder and a lot funnier.

This kind of laziness is a true crime in a series like HOTEL TRANSYLVANIA, which features a completely character driven story. This movie cannot afford to be lazy because there isn’t a compelling plot to keep the viewers interested if the dialogue and characters are anything less than superb.

Ideally, the plot should serve as a framework for the characters to develop. But there is no plot. HOTEL TRANSYLVANIA 2’s official synopsis describes Johnny and Mavis going to visit his parents in California. However, this ends up being an awkwardly rushed 15-minute segment halfway through the movie. The rushed scenes are only made worse because this short sequence is the only part of the movie where some of Mavis’s former charm shines through her soccer mom facade.

Shortly after the advertised “plot” ends, we are catapulted back into a stale mess of character conflict that culminates in a bafflingly violent melee action scene. Dennis does a complete 180 on his developed personality (not that there was much development to him). The sweet little toddler morphs into a vicious fighting machine and resolves all of his problems by savagely beating them into submission. The entire sequence is disconcertingly animated as a fun, lighthearted scene, where everybody is laughing and enjoying themselves while dishing out wrathful pain to a horde of monsters.

The writers of HT2 were all over the place with the movie. They couldn’t be bothered to come up with a plot or conflict that builds upon their previous developments, so they rehashed the original conflict, jumbled up all the major selling points, and slapped ‘2’ on the title. Cue: HOTEL TRANSYLVANIA 2.

Hollywood Laziness and its Poster Child

One of the roots of HT2’s issues is Adam Sandler. Sandler has a track record—especially in recent years—of half-baked content development and stale performances. This habit of laziness has never been more apparent than it is in HT2, a movie that he clearly put only the bare minimum amount of effort into it before jumping ship with a fat check in his pocket.

While Sandler is the definitive poster child for this behavior, he is by no means unique in behaving this way. This ethic of laziness for profit runs rampant in Hollywood film production. Every year, new sequels are released that make the intelligent viewer wonder how the heck this kind of nonsense made it past a review committee. 2016 alone gave us ZOOLANDER 2, THE PURGE: ELECTION YEAR, MY BIG FAT GREEK WEDDING 2, and ICE AGE: COLLISION COURSE, to name a few.

The saddest part of this depressing feedback loop is that it isn’t necessary. Hollywood studios are terrified of breaking the mold with innovative new scripts. But that very terror is what is now causing their precious profits to slowly and steadily decline. Viewers and moviegoers are growing jaded with the same old formula for every movie that they see in theaters. We are tired of sequels.

Because of that weariness, viewers are embracing with wide open arms shows and movies that dare to break the mold, even if they are less than perfect. This has never been more evident than it is when we look at Netflix Originals.

INTERESTED: A fair and thoughtful review of DOCTOR STRANGE, nailing all the major points.

The Rise of Netflix Originals

Furthermore, Netflix is developing a reputation as being a welcoming studio for writers. The best writers are now submitting their ideas to Netflix first, not the other studios. Not only are Hollywood studios losing profits because of their fear of embracing originality, they’re also losing their talent.

But, as with any studio, Netflix is not without their mistakes. In a cringeworthy oversight, Netflix signed Adam Sandler as a writer and producer for a series of godawful movies, including THE RIDICULOUS SIX and THE DO-OVER. Sandler has an eerie talent for jamming his foot into any door that smells like money, and Netflix is no exception.

The big dollar studios of Hollywood need to get their act together. Audiences are weary and sick of crappy sequels- and it won’t be long before they stop paying for them altogether. After all, why pay $10 for a bad movie when that $10 could buy a month of unlimited streaming service of good movies and TV series?

CLICK: Looking forward to the next phase of Marvel’s Netflix series? Check out this article!

For all my criticisms of HOTEL TRANSYLVANIA 2, the movie does stay true to its message. People should be accepted, regardless of appearance, race, and class. The movie ends with everyone being accepting of everyone else’s uniqueness, and while it’s a corny message, it’s a good one. It certainly could have been delivered better, but it does get delivered, and kids will take away what’s important from this movie.