When I first heard that Dark Horse was working on a HOW TO TRAIN YOUR DRAGON graphic novel, I was ecstatic. DreamWorks’ HOW TO TRAIN YOUR DRAGON is an absolutely fantastic series, one that I have been following for years. It is the fun and captivating tale of Hiccup, son of a Viking chief and scrawniest guy in his village, using inventions and peaceful conflict resolution to mend the divide between humans and dragons. The monster designs are awesome, the jokes are hilarious, and Hiccup’s friendship with his catlike dragon Toothless is adorable. 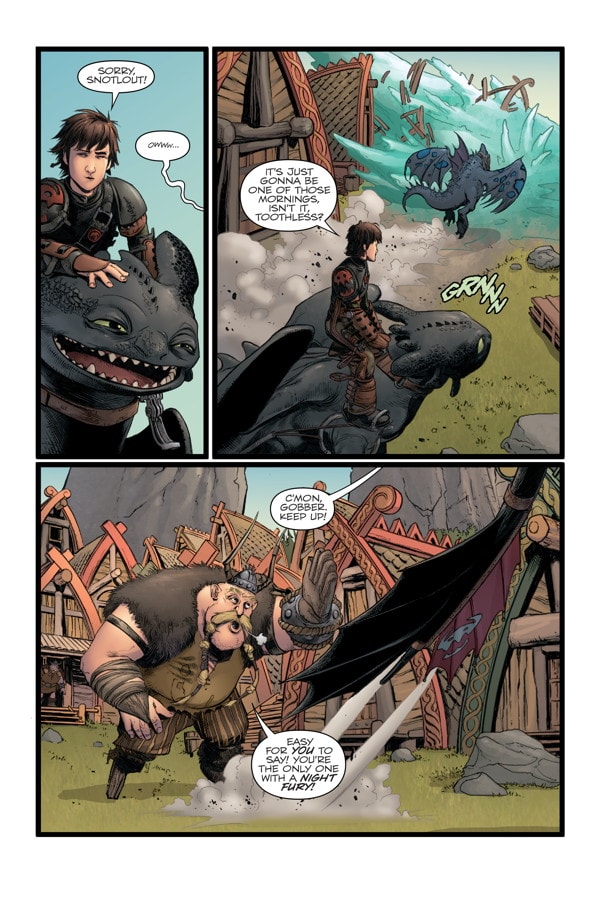 That being said, there are certain things you just can’t do in a movie. There isn’t enough time to develop side characters or delve into the minutia of life with dragons, for instance. However, comics don’t have to deal with the same restraints of time and money that big-budget Hollywood animated films do. Therefore, there’s a lot of potential to explore certain aspects of HOW TO TRAIN YOUR DRAGON’s weird world through a comic.

For instance, there could be a story about Hiccup dealing with (spoiler alert) the trauma of witnessing his father’s death in the second movie. We could have a comic exploring the mistakes of Hiccup’s mother. After all, despite the film’s portrayal of her as a Strong Female Protagonist™, she is essentially a version of Hiccup whose tendencies towards self-isolation and avoiding responsibility have gone too far, leading her to abandon her family for decades. There could be a backstory comic on how Hiccup’s parents met, or how his father and Gobber became besties. There could be a comic exploring Toothless’s life before meeting Hiccup, or one fleshing out Hiccup’s girlfriend, Astrid, as a character, since we never see too much of her. Heck, we could have a comic encyclopedia of different breeds of dragons or different inventions Hiccup has worked on.

There are endless possibilities here, and HOW TO TRAIN YOUR DRAGON: THE SERPENT’S HEIR, written by Dean DeBlois and Richard Hamilton with art by Doug Wheatley, does exactly none of them.

Here’s what does happen in HOW TO TRAIN YOUR DRAGON: THE SERPENT’S HEIR. After falling to shambles at the end of the second movie, Hiccup’s village of Berk is in the process of rebuilding itself. There’s some mention here about how Hiccup doesn’t know how to lead without his father to guide him and how he still hasn’t earned the village’s trust. This is all important elaboration on the film’s ending. After all, the last time we saw Hiccup, he was at the start of a major life change – accepting political responsibilities as a fatherless adult.

However, any attention to this is quickly diverted when a group of ambassadors from another island request Hiccup’s help. Our hero immediately decides to fly to their island of Nepenthe and fix their problems, abandoning his own people while they’re at their most vulnerable. Considering Hiccup was not a popular leader before, I am certain this doesn’t help matters, but let’s not think about that too hard. 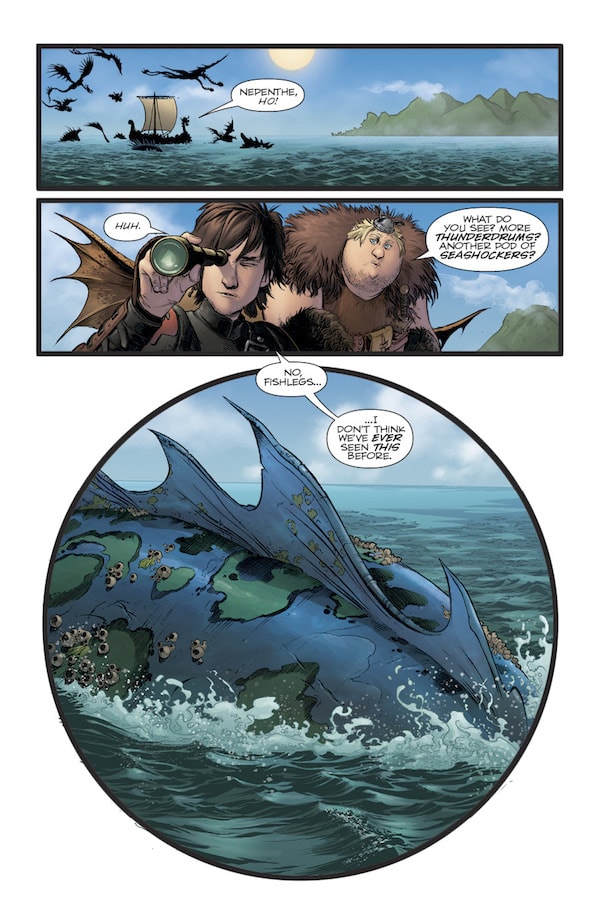 Hiccup, accompanied by a select group of Vikings, travels to Nepenthe to investigate whether dragons are behind the incessant tremors beneath the island. There, he and his friends encounter a young king who is also avoiding responsibilities – instead inviting everyone to chill at the hot springs rather than worry about the earthquakes. Turns out, the water is drugged, and everyone wakes up later shackled in a dungeon. An ambassador named Calder explains that he actually brought them there to steal Toothless’ wings because he (sigh) identifies as a dragon. Cue the main characters all mocking how crazy Calder is during their efforts to escape the island.

To me, this reads as a metaphor for trans people. Throughout the history of film, there have been transgender villains whose gender gets painted as violent and deranged. Buffalo Bill from the classic horror film SILENCE OF THE LAMBS immediately comes to mind. Described by Hannibal Lecter as “a thousand times more savage and more terrifying” than the regular “transsexual,” Buffalo Bill is a serial killer who takes the skin of plus-sized cisgender women in order to sew a “women suit.” In the same way, Calder wishes to take Toothless’ skin for his dragon suit.

READ: For more about transgender villains in media, check our own analysis of the ROCKY HORROR remake!

Not to mention, the language around Calder echoes a lot of phrases used by and about trans women. For instance, he says, “I have always understood that I was different, even as a boy.” Later on, Hiccup tells him, “You’ll only ever be a man” (not my italics, by the way). Note how our protagonist does not tell Calder that he’s a human, but that he is a man specifically.

Such a portrayal is extremely damaging to transgender people, who still face extremely high mortality rates due to hate crimes and suicide. Think about the kids reading this comic. They’re going to learn that, when someone comes out about an identity and starts changing their physical appearance, the proper reactions are mockery and mistrust. This is how bullying and self-loathing begin. I’m not sure those are things that DreamWorks and Dark Horse want to encourage.

Leaving the unfortunate implications aside, this villain does not even work from a storytelling perspective. Throughout THE SERPENT’S HEIR, there are tons of references to the concept of change. After all, this is an important theme at this particular moment of Hiccup’s life. He and his village are in the process of transitioning to life without Stoic, their old chief. It’s essential to embrace that change can be rocky but ultimately help develop new strengths – such as Hiccup’s newfound leadership. Hiccup even makes a speech on what he’s learned about the necessity of change through his trip to Nepenthe. 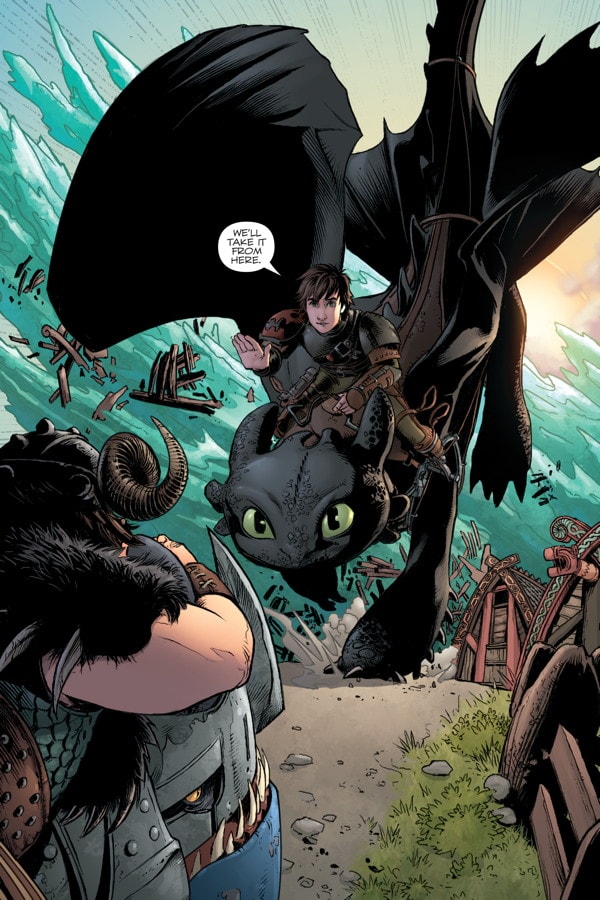 And yet, when exactly did he learn that change is good on this trip? The villain actively embraces change, and the heroes are repulsed by him specifically because of this (and not, you know, because he drugged and kidnapped them and wanted to skin an animal, which I would’ve considered a much bigger deal). If change is the big theme here, then shouldn’t the villain be opposed to it and the heroes for it? That would make more sense and supplement Hiccup’s character arc far better than randomly bashing trans people ever would.

Aside from the problematic and frankly unnecessary plot-line, THE SERPENT’S HEIR has a few things going for it. The comic introduces some cool new types of dragons, including a variety of sea serpent breeds. Plus, for the most part, the art is very strong. The art style bridges the gap between caricature and representational figure smoothly, allowing the normally three-dimensional characters to fit seamlessly into a two-dimensional space. This is no small feat. However, the facial expressions are very awkward at times. There are quite a few panels where Hiccup’s lifeless eyes stare blankly at the reader. Frankly, I found it terrifying. 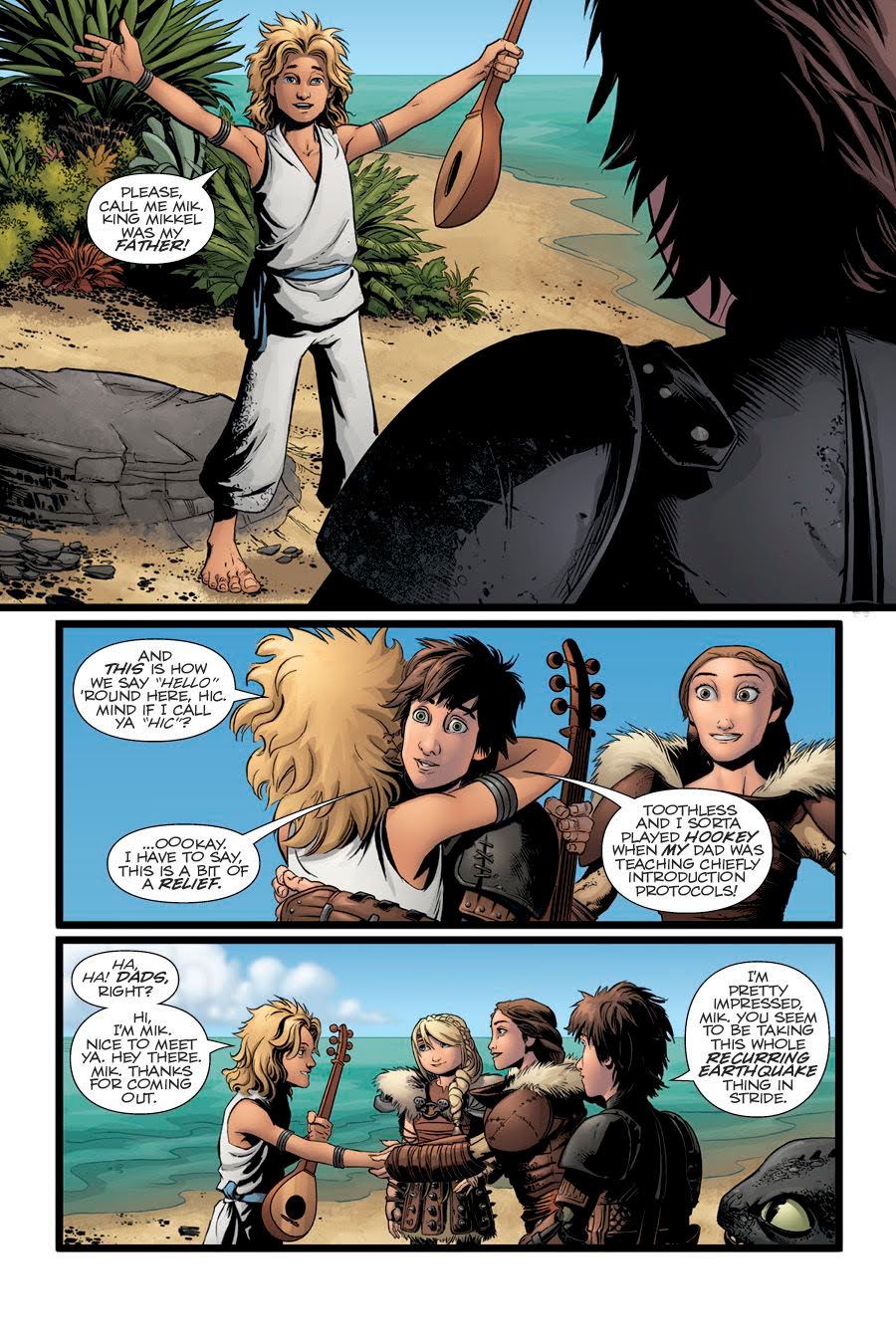 All in all, HOW TO TRAIN YOUR DRAGON: THE SERPENT’S HEIR is definitely a mixed bag. If you really miss all the characters, it might be a way to revitalize your interest in the series. However, I know that the series can do way better than this, and I want to see that DreamWorks genius on the printed page. Here’s hoping that the next HOW TO TRAIN YOUR DRAGON comic provides a much stronger story than this one.