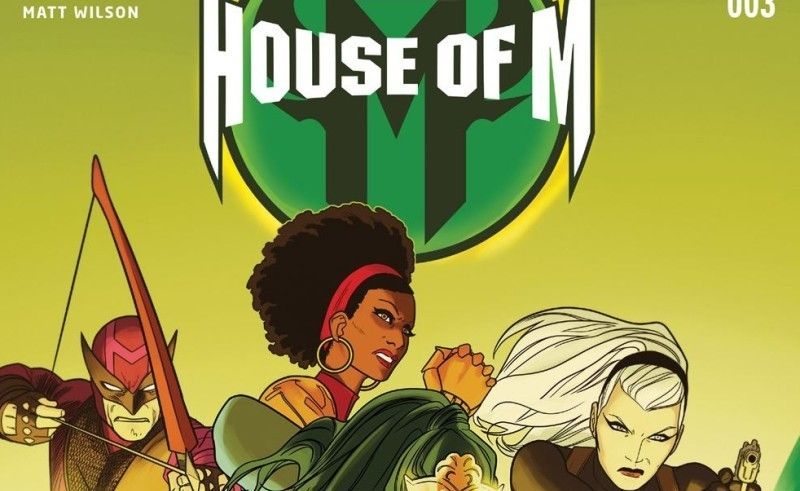 There’s a new monarch in town. And his twin sister is not amused. Meanwhile: a fallen leader ends up his in former kingdom’s slums with the very people who tried to assassinate him…

He was bored. He wanted a war. And now he gets one. As the troops of Atlantis violently conquer Castle Magnus, Magneto barely survives the flood. Without his powers, he only manages to make it out of the castle with the help of his daughter – and, ironically enough, they end up on the run with the exact same Human Resistance assassins that tried to murder Magnus in the first place! Meanwhile: Quicksilver is made the new King over this domain by Namor, and he wants to let his entire kingdom think that their former ruler died during the attack by the troops of Atlantis. But Scarlet Witch is not enthusiastic about this, at all, and as she expresses his anger at her twin brother, we get to see the full potential of her powers… 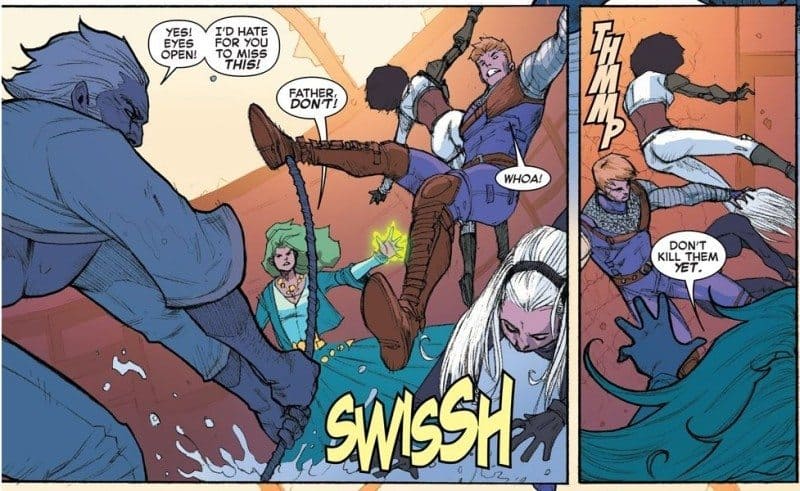 In the third issue of the “Secret Wars” tie-in centered on the royal family in the House of M Universe, Ario Anindito takes over the art from Marco, and while a change isn’t necessarily a bad thing, in this case the issue seems a little too shady and gritty to me. The art in the previous issues wasn’t perfect, but it more or less resembled the art by Coipel in the original book and recreated the event’s atmosphere. In this case, most panels just don’t seem colorful enough. I don’t really know the reason for this swap of artists, but it definitely doesn’t benefit the book, as while reading the trade paperback, this is going to interfere with the flow of reading.

Something this issue does extremely well is to implement an element we all loved about Bendis’ and Coipels’ book: the character interactions within the royal family are essential to what happens within the plot, and they’re what makes this read so exciting! Wanda is put into a situation where her anger in combination with her immense powers make her extremely unstable and dangerous. And the key to keeping her under control – and keeping her from harming others with her powers – are the relationships to her family members. But still, Wanda is presented in a very different way than in the 2005 book. She’s still dangerous, with immense powers, but she makes decisions of her own, and she’s not really portrayed as mentally fragile. Which, in a way, empowers her as a character.

Dennis Hopeless and Cullen Bunn both did a great job at taking many protagonists and ideas from the HoM world, adding some of their own (Deathlocket and Namor), distributing their protagonists on the playing field and setting up an interesting conflict! This is the kind of creativity I want to see on the upcoming X-titles by both writers (ALL-NEW X-MEN by Hopeless and UNCANNY X-MEN by Bunn)!

READ: WHY HOPELESS’ ALL-NEW X-MEN WILL BE A GREAT BOOK!

I really enjoyed their work on Magneto for this book (which is great, because Bunn, after having had his own Magneto solo title, will be writing another Magneto-centered book with UNCANNY X-MEN). A great revolutionary, who becomes terribly bored as a king and missed the thrill of old days of war. Who willingly lets a war begin and not only loses his mutant powers, but also gets replaced as a king by his own son! That is one hell of an arc! The only thing that bothered me is that Magnetos’ reaction to losing his powers was not desperate enough. Magneto associates being human with being weak and inferior, so turning human himself is more or less what he fears the most, especially in a world where he has already started relocating Homo sapiens into concentration camps. Also, I thought that Speed and Wiccan were terribly under-represented in this issue, I hope there’s more to come in the following issues for these two characters.

HOUSE OF M (2015) #3 is a great addition to this exciting book. Though Magnetos’ reaction to losing his powers is not very believable, and the fact that Marco Failla left the book will ­­­mess with the reading flow, both the overall character portrayal and the plot are great. And a subtle, but exciting cliffhanger makes me want to read the last two issues. And I’m so happy that both writers got one thing right: to make this book about the conflicts within Eriks’ family.