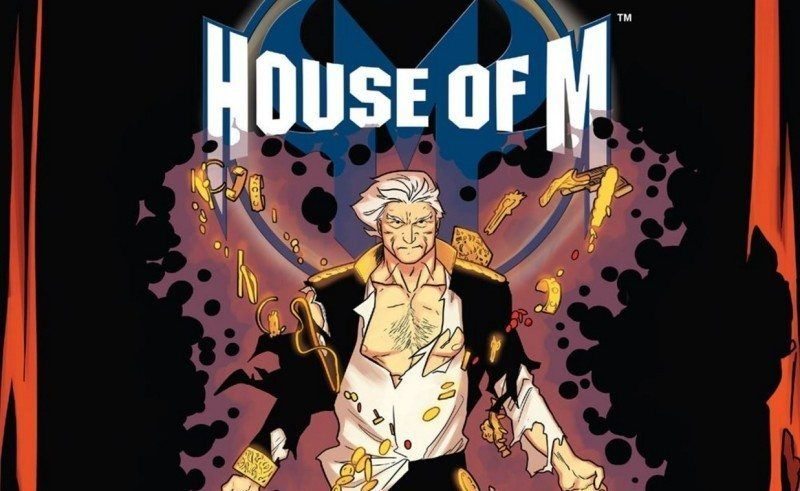 In the final issue of the HOUSE OF M tie-in, it’s SHIELD vs. the Human Resistance, Magneto vs. Quicksilver, and… Namor vs. everyone…?

In the final issue of the SECRET WARS tie-in centered around a world where one of the X-Men’s most dangerous enemies/members finally goes monarch, Magnus has to break into the very prisons he set up for people born without the X-Gene or people who oppose his philosophy. During the process, our main character is being reminded of how it feels to be a regular human being instead of a mutant leader, forced to cooperate with a species he despises. After the prison break, a fight between S.H.I.E.L.D. and the remaining human rebels unleashes that allows Magnus to take back his castle and finally resolve the conflict within his family… 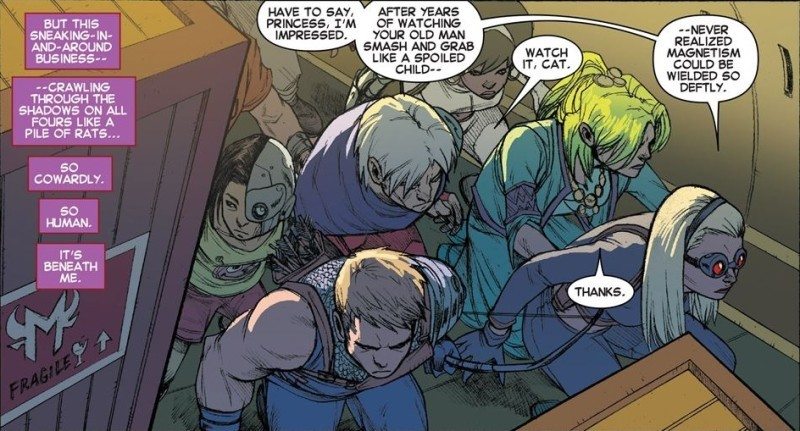 I initially didn’t expect this book to be wrapped up with the fourth issue. It definitely feels as if the writers would have been able to finish their story in way that feels more complete had they had another 22 pages. Even though I enjoyed the final showdown between the conflicting parties and I wouldn’t necessarily say that scene felt rushed, the confrontation between father and son is not really satisfying. In the previous issue, the confrontation between Wanda and his brother felt like the turning point of the story, with Wanda being an important key figure in this conflict and the control over her powers and emotions being an important motif in the book. In this issue, her side plot is just totally ignored, and she is being turned into some kind of damsel in distress kind of character, literally sleeping during the entire comic.

LISTEN: Our latest Podcast is about EMMA FROST! Whether you love her or hate her, give our podcast a listen and hear our thoughts!

She’s not the only character that doesn’t get enough spotlight in the story’s finale. And I’m especially talking human characters such as Deathlocket and Misty. Overall, the subplot about Magneto and the relationship to the human rebels felt a bit rushed towards the end. Actually, rushed is a pretty good word to describe the entire issue, since it’s more fast-paced than the previous chapters, and you can definitely feel how the creators needed to pack in way too many plot elements for 22 pages.

Something the creators definitely succeeded at, though, was developing their main character. Cullen Bunn is, as mentioned in my last review, already experienced at writing books centered on the character of Magneto, and he really understands the gist of the character here and yet manages to develop him, in a way. Magnus acts extremely in character and believable when it comes to his decisions about the human rebels, because he still sticks to his – questionable – principles. This also gave the creator a nice opportunity to wrap up the Speed/Wiccan side plot in a very nice way, and I’m pretty impressed by that. Also, the similarities between the first scene in #1 and the last scene in #4 put a nice framing around the story that showcases his development: what Magnus experienced during these few days, the events that brought back the excitement of the old days, made him realize how much he loves being a king.

The art in this issue is neither really good, nor especially bad. Though some facial expressions look unintentionally funny and I feel like, overall, color artist Matt Wilson could have done a better job at making the world seem brighter and more colorful in order to remind the reader of how this reality looked during the original event. Overall, the art is OK, though.

After all, HOUSE OF M #4 only partially manages to wrap up the book’s story and feels really rushed, but convinces with its great depiction of Magneto. And it makes me even more curious to read Bunn’s and Hopeless’ upcoming X-Men titles.