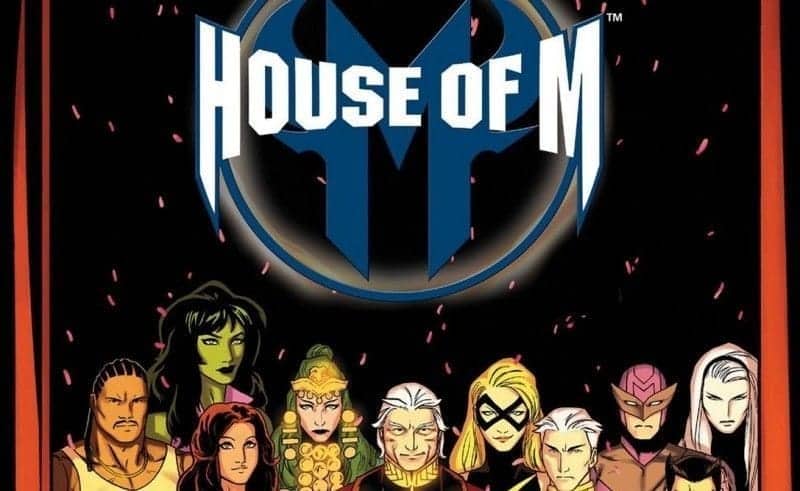 Welcome back to the world of HOUSE OF M, where King Magnus reigns over a civilization consisting of mutants while Wolverine, Nightcrawler and the other agents of SHIELD hunt down the heroes of the Human Resistance and Pietro is negotiating with Namor from the Kingdom of Atlantis…

For us, it’s been ten years since the original “House of M” arc.  This was a parallel world created by the Scarlet Witch, where most of our heroes’ wishes came true – especially that of her father Magneto, the wish to have mutantkind reign over humanity. In this world, Magnus is the king of a society in which regular humans are looked down upon and mutants are a big majority.

The first issue of this book, based in a Battleworld domain where the House of Magneto rule, picks up on events during the reign of Magneto and the uprising of the Human Resistance. Magneto looks back on a life full of violence and the persecution of mutants, but now, he has finally seen his dream come true. With SHIELD agents like Mystique, Rogue, Wolverine and Nightcrawler hunting down regular heroes like Luke Cage, only few of the Human Restistance members survive, including Hawkeye; and they have to try and escape through a world that hunts them in a similar way mutants were once hunted… Meanwhile, Wanda has problems with her rebelling teenage sons Wiccan and Speed, and Quicksilver negotiates with King Namor of Atlantis. But he definitely has his own plans his father does not yet know about…

The first thing I realized about this series is that it especially seems to focus on the actual dynasty and Magneto’s family, as well as on Hawkeye and the rest of the regular humans resisting the regime. Which, at first, was surprising, because I expected focus on the characters the original book thematized, like Wolverine, Layla Miller and Spider-Man. In retrospect, though, it makes sense to focus on Erik as a monarch and the politics surrounding the House of M instead. It makes you see this world from another perspective. This is Magnetos dream come true, so why not take Magneto as the main character in order to show his development over the years from a persecuted revolutionary to a powerful sovereign? His inner satisfaction (which leads to a certain carelessness) is really displayed in this issue.

Also, apparently Namor’s role has become far more important in this series. Which I’m not that sure about, yet. But the “arrogant fishman” could become the perfect nemesis for a formerly satisfied Magneto: he battled him in the past, the two really hate each other and Namor could be a real threat to the kingdom Magneto established. And Quicksilver is definitely up to something in this potential conflict between Atlantis and M. Whatever plan he has, it will definitely have something to do with the relationship to the rest of his family, especially his father. And Magnus will realize far too late…

HOW QUICKSILVER WAS PORTRAYED IN TWO DIFFERENT MOVIE FRANCHISES!

Another thing that really grabbed my attention in this issue is that both Speed and Wiccan, known from the YOUNG AVENGERS books, are introduced as in-canon children of Wanda. Hopeless has made a great decision including these two characters instead of the children Wanda had in the original HOUSE OF M book.  They’re fan-favorite characters who we haven’t seen much of in the last few years of comics, in a complicated way they are Wanda’s children anyway, and they seem to fit the whole scenario perfectly.  Their behavior is totally believable and makes sense: of course would they rebel against their families anti-human regime and stand in for the persecuted minorities. Wanda herself is portrayed as more powerful and less vulnerable, but also more mentally sane, which is probably due to the fact that she was kind of a plot device in the original story.

IS WANDA READY FOR HER UPCOMING SOLO SERIES?

So the plot concentrates on Magneto and his family, especially the politics and intrigues inside of Castle Magnus. Which makes sense. The characters are portrayed in an interesting way, and I’m curious to see where their arcs are going. Something this book definitely struggles with, though, is the art. Facial expressions often seem sloppy or rushed, and generally speaking, Marco Failla doesn’t fully manage to drag me back into the HoM world. Which is a pity, because the book has many interesting approaches, and with artists like Kris Anka (this issue’s cover artist) or Oliver Coipel (the original event’s artist), this book would have been far more enjoyable.

At the end of the day, HOUSE OF M is not a must-read, and definitely not one of the best x-related tie-ins to “Secret Wars”. A big minus of the book is the not very convincing art, but many new perspectives on the HoM universe, as well as the focus on Magneto and great ideas like including Speed and Wiccan, keep this issue an interesting read.