It was during the late Eighties when I first laid eyes upon comics’ most notorious shark, Hook Jaw. It was in an ACTION ANNUAL, but the year escapes me. It was at my aunt’s house and was lying amongst her many READERS DIGESTs. Picking it up, I flipped through its pages, glancing over the war stories full of explosions and guns until I happened upon the story of HOOK JAW, a great white shark that, well, ate a lot of people. Sure, most of them were exceptionally villainous and cruel, but it was quite a shock to my system. It was in black and white, which made it feel stark and in someway more horrifically real, most of it set beneath the coldness of the waves. Big teeth tore and split flesh like it was nothing, and dark ink filled the sea. It was mesmerizing, and utterly terrifying. Hook Jaw was always front and center, his mouth always open, his sharp teeth covered in gore. It scared the hell out of me but I couldn’t look away. For years, when I visited my aunt, I always ended up reading the ACTION ANNUAL, and the HOOK JAW story in particular. It might somewhat explain why my favorite movie is JAWS.

So imagine my excitement, curiosity, and slight nervousness when Titan Comics announced a HOOK JAW revival. First headlining the British anthology comic series ACTION in 1976, Hook Jaw centered around a great white who was the ‘hero’ of his ongoing comic strip, constructed around environmental themes. Greedy oil barons and the like would threaten the ocean, and Hook Jaw would promptly and savagely devour them. This relaunch, written by Si Spurrier with art by Conor Boyle, aims to bring the titular shark back into the public consciousness. I looked at the previews and felt quite hopeful with what I saw; great atmosphere, phenomenal lighting, and the excellent use of internal monologue by the shark itself. Shortly after, I was able to get my hands on a preview copy of HOOK JAW #1 thanks to Titan Comics. Could the flesh-eating antihero of the sea make a successful comeback? This new series has serious potential to make that happen. 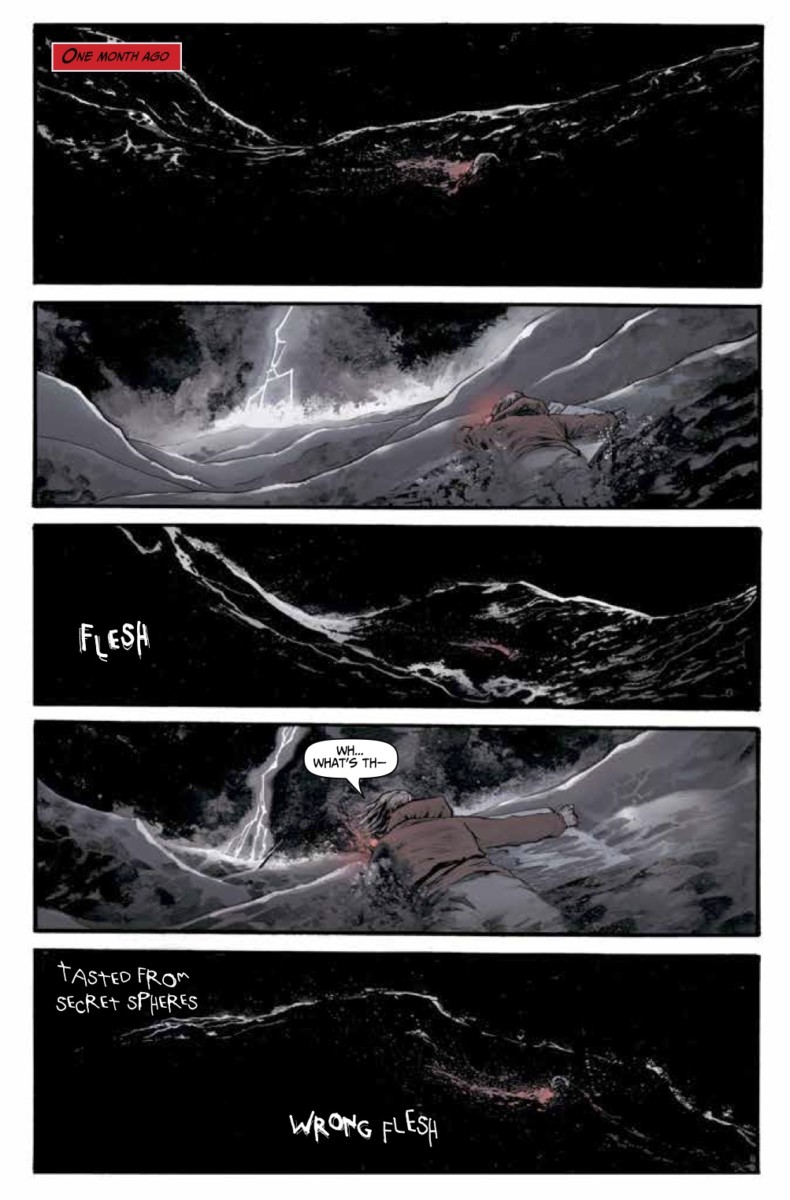 HOOK JAW #1 begins strongly on a dark and stormy night at sea. Lightning strikes and waves crash, as a lone survivor of a (presumable) boat accident is tossed about on the waves. As the skies and ocean are lit up for a brief moment, he or she spies something moving towards them, a spear hook protruding out of the water, but then the world around them goes dark again. Within a page, they are lost to that darkness. It’s an atmospheric opening to the comic, with a great combination of writing, art, colors, and lettering. The reader knows something is wrong a panel before the unfortunate victim does. Here Spurrier introduces the idea of the internal monologue for Hook Jaw, a broken English that speaks of ‘nourishment’ and ‘flesh’. Letterer Rob Steen uses a font for Hook Jaw’s words that reads like they’re scratched into the very panels, unsettling tears rendered across the pages as the shark considers his meal. Conor Boyle does an effective and simple job of creating an ocean in turmoil. Giulia Brusco’s coloring, however, is where most of the suspense is created. Little specks of light on a darkened sea, his use of colors creates a dramatic pace that builds to a haunting, silent payoff.

READ: Titan Comics produces some excellent DOCTOR WHO comics! Take a look at our round up here!

One month later, cut to Maggie, a marine scientist tagging great white sharks off the coast of Somalia. She is part of a group who have been tracking great white sharks that have been demonstrating a pack-like behavior (unheard of in the scientific community). Their job is to prove great whites can operate in a pack, and so far the signs have been mostly positive. Though there is some uncertainty around who the boss of the pack is (one guess who that could be), the team is sure they can make some scientific breakthrough within their six-month mission. 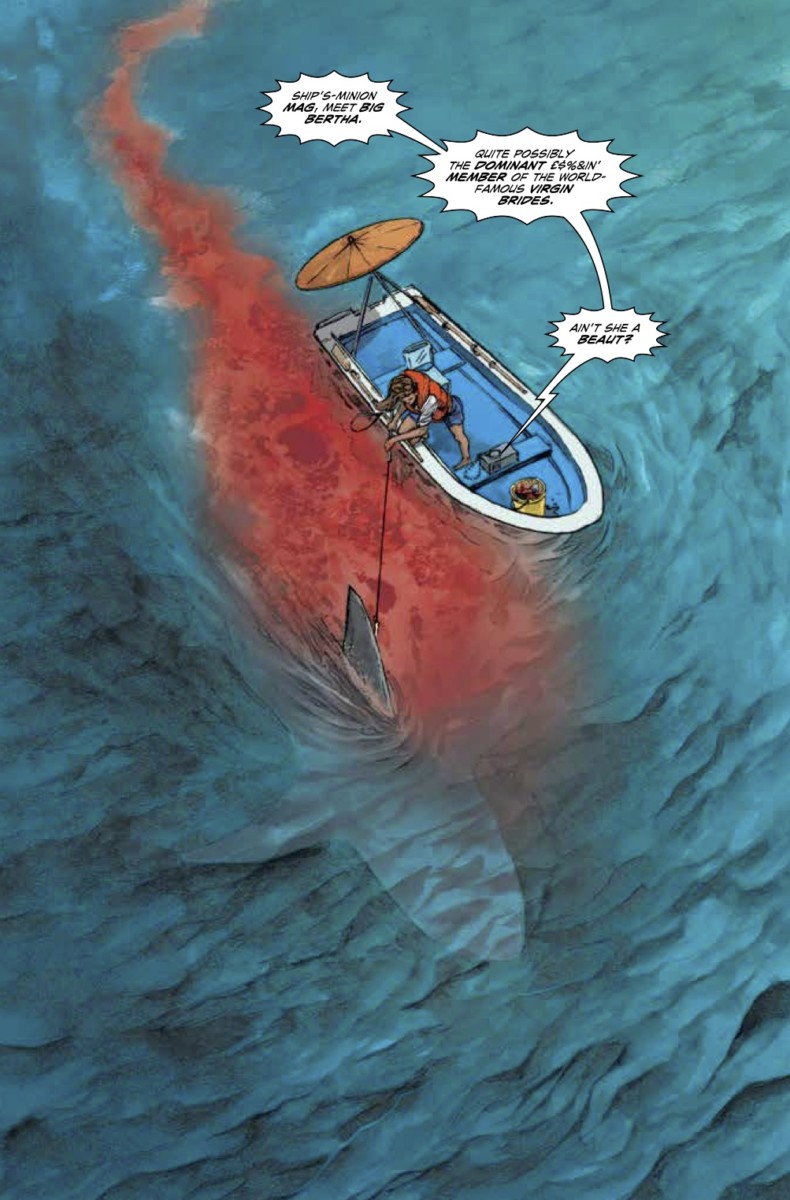 The tone is lighter here, with Maggie’s colleague, Professor Leyland, spouting expletives that would make a sailor blush as they tag and follow the great whites. Spurrier gets through a lot of the exposition naturally, adding some comedy and mystery to these scenes, before Maggie realizes her boat has been hijacked by Somali pirates. Boyle makes us feel at sea, his use of panels and inking capturing the unsteadiness of the water, while Brusco’s blues suggest wide open skies and a deep blue ocean. Everything clips along at a nice steady pace, with the hijackers being perceived as more of an inconvenience than an actual threat. It’s not until the introduction of some brash and cocky Navy SEALs that things start to escalate very rapidly. With the arrival of Captain Clay Klay of the US Special Ops, a peaceful resolution with the pirates turns violent, guns blaze, and Professor Leyland is kidnapped. What’s worse is that Captain Klay is missing two of his men, and then hears them screaming in terror over his radio…

HOOK JAW #1 excels at creating a sense of dread, while also being really funny. It does get quite wordy at times, with dialogue balloons filling up a good portion of the panels. This at first felt like too much, but once you get into the rhythm of the piece, it’s quite good fun with some great comedy built around communication and mistranslation. Boyle excels at the horror elements of the comic while keeping things nice and normal in the more basic scenes. There are some moments where his inking is slightly muddied, where I wasn’t sure exactly what was happening, but these panels were few and far between. The last page, though, is a triumph in terror that hints at the gore and death to come.

READ: Si Spurrier tackles the werewolf myth in our review of CRY HAVOC!

Overall, it wasn’t what I initially expected from a HOOK JAW comic; the shark was mainly off panel, and it was more character focused. However, it made sense to do it this way. It has a nice slow build up, establishing the main cast of characters and a solid plot. With these in place, HOOK JAW #2 is set to provide the sort of gruesome action that #1 hints at, and I, for one, cannot wait to read more.