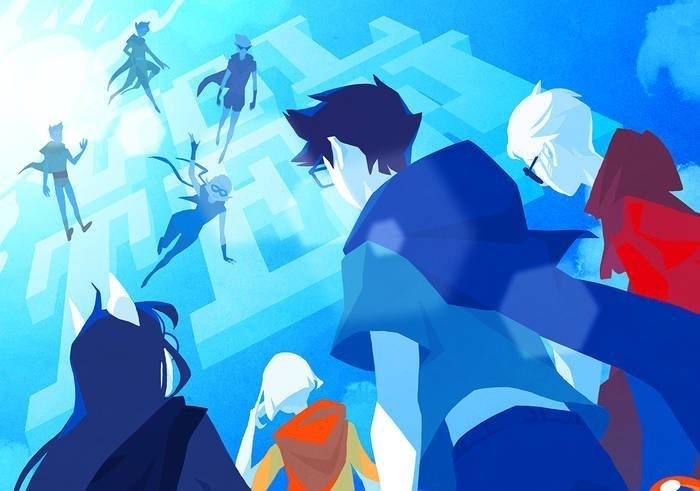 HOMESTUCK by Andrew Hussie is one of the most influential webcomics in fandom culture. For those who don’t know, “let me tell you about [it]”. First, the comic is notorious, among both fans and non-fans, for being incredibly complex. So much so, that non-fans fear the dreaded sentence: “let me tell you about HOMESTUCK.” That fame, however, is a big part of the comic’s influence on other fandoms (a “fandom” is a community or subculture of fans of a particular series). The HOMESTUCK fandom is an incredibly large one.

Before getting into the fandom itself, let me give you an idea of what the plot of the story is. Four internet friends decide to play a game that, surprisingly, triggers the apocalypse. This game, called Sburb, is actually a program that creates new universes, if you beat it. Eventually, the four human kids playing—John, Rose, Dave, and Jade—find out that their universe is a product of another species’ (“trolls”) game. Previously, the trolls failed to enter their new universe because a villain from the kids’ session crossed over into the trolls’ session. To clarify: the trolls’ game is ending when the kids’ game begins, and the villain from the beginning of the kids’ game ruins the trolls’ end. Now, both groups of players have to work together to complete the humans’ session so everyone can escape the game and live in a new universe.

Approximately 600,000 fans visited its main website, mspaintadventures.com, daily during the webcomic’s peak years. If that number doesn’t convince you of its popularity, you should know that the website regularly crashed due to internet traffic during critical plot updates. Even when Hussie uploaded the comic’s fifth act finale video to Newgrounds, a website with a stronger internet server, that website went down within 7 minutes of the update. The sheer number of fans alone made the comic an internet sensation, but what the fans did created a shift in general fandom culture.

Cosplay is when fans create and wear costumes modeled after their favorite fictional characters. Generally, cosplayers like to imitate human, or human-like characters from Japanese anime. Apart from a few facial details, like whiskers or scar makeup, full bodypaint usually isn’t necessary. However, during 2011, when HOMESTUCK was at its peak, you could find hundreds of fans at a convention photoshoot, the majority of them painted grey from head to toe. These gray humanoid trolls were some of the most popular characters to cosplay from the webcomic.

Cosplaying in full body paint came with a lot of trial-and-error, and a lot of paint on clothes. In the end, troll cosplayers either figured out solid methods for sealing their paint so that it didn’t smear on anything (or anyone), or created skintight suits. They then passed on these methods to newer fandoms, like STEVEN UNIVERSE.

Tumblr user cosmonautcosplay is both a HOMESTUCK and STEVEN UNIVERSE fan and cosplayer. She cosplayed the Crystal Gem fusion character Alexandrite recently at Katsucon 2016 (left). The image of her cosplay appeared on Rebecca Sugar’s instagram! One of her older cosplays is of Feferi Peixes (right), an aquatic troll character from HOMESTUCK.

CLICK: Play a lot of EA and Bethesda games? Here’s what you missed at this year’s E3!

Typically, convention (“con”) panels are made up of content creators, producers, or official character voice actors. But, in addition to cosplay, HOMESTUCK fans also popularized in-character ask panels at cons. Basically, fans put together a cosplay group with one of each of the main characters, and answered audience questions as that character. This allowed fans to explore their idea of the character’s personality or possible relationships. If someone had a particular “headcanon,” or certain belief of a character’s traits that hadn’t been explicitly addressed, they could take the character into their own hands.

One of the most well-known panels, called “A Bucket Full of Homestuck,” took place at the 2012 Anime USA convention. The panelists laid out the rules of what people could and could not ask (depending on the rating of the event), and then let the audience ask. The popularity of these events continued onto other cons. Castle Point Anime Convention 2014 held another HOMESTUCK panel event, as well as a DANGAN RONPA one. Other conventions have had their share of SUPERNATURAL ask panels and other various anime panels.

Speaking of in-character roleplay, HOMESTUCK has created new methods of making roleplay easier online. Online roleplay started on forums where you could register for an account, create a thread with an overall theme, and allow anyone to reply. In 2011, HOMESTUCK fans created a website called MSPARP (MS Paint Adventures Role Play) that mimicked the chat system used by the characters in the comic. Other downloadable chat clients were also made—like Pesterchum, named after the fictional chat client in the story—but MSPARP remained generally more popular due to its accessibility.

READ: Enjoy media geared towards teens? Check out The Value of Maturity in Cartoons!

On MSPARP you can make group chats, look for a random partner, or search for a specific character—and everything happens in real time, like on Facebook messenger or Skype. Character’s names and chat colors are customizable, so you can be any character you want at any time. The chat also has “Safe for Work” and “Not Safe for Work” categories to separate younger roleplayers from older ones. This safely separates explicit or violent roleplays from underage eyes. While these chatrooms haven’t inspired other fandoms to create their own, they have provided a platform for all fandoms to use. It’s not uncommon to find RWBY, STEVEN UNIVERSE, or UNDERTALE group chats on MSPARP.

Its was also possible to roleplay on the blog website Tumblr—but it came with several drawbacks. Delayed replies caused singular roleplay sessions to last days or weeks. Fights over available “canon” url names occurred and the website’s blog formatting proved inconvenient.  On Tumblr, if you didn’t want your main blog to be completely dedicated to roleplaying a single character, you would have to create a side-blog that you couldn’t follow people with.

This led to the creation of roleplay ask blogs (fan-made blogs that represent a fictional character), another fandom trend popularized by HOMESTUCK. The blogger answers questions as if they were the character however they see fit. Tumblr users askthedouchefin and asktheheiress are two popular troll character ask blogs which reply to asks with beautiful digital art, which, in turn, prompts more fans to ask and follow! Other users, like askstridervoice and askkarkatvoice are popular due to their voice acting talents. Many fans might headcanon these bloggers’ voices as the characters’ canon voices.

Since Tumblr is such a public, intertwined website, users from other fandoms decided to create similar blogs. For example, askfriskandcompany and dreemurr-reborn are UNDERTALE ask blogs, a popular video game created by Toby “Radiation” Fox. Jonahscottva became popular for voice acting an English version of Jean Kirstein from ATTACK ON TITAN. All these blogs use the same artistic answering methods that HOMESTUCK users promoted initially. Essentially, because of HOMESTUCK, ask blogs now exist as a popular facet of Tumblr culture for other fandoms.

HOMESTUCK has influenced a new generation of fan interaction with content. For example, fan input strongly influenced the first few “acts” of the actual comic! Hussie also employed some of the most popular fan artists to work on the comic with him! Tumblr user guzusuru, also known as subugu on YouTube, created an incredibly popular fan animation “A Lullaby for Gods” in 2013. Guzusuru also created the entire Act 7 animation, guided by Hussie. Tumblr user toastyhat, another popular artist, provided parts of animation the Act 6 finale.

It is this close interaction with the fans that encourages people to generate their own unique content, and perpetuate the effect that the webcomic has had across the internet. Michelle Czajkowski, the author of AVA’S DEMON, was able to raise $200,000 for her comic because she had previously worked as an artist for HOMESTUCK. UNDERTALE by Toby Fox became hugely popular in part because of his participation in the webcomic. HOMESTUCK hasn’t just inspired new fandom practices, it has also helped generate entire fandoms. If that doesn’t speak to its massive influence, nothing else will.