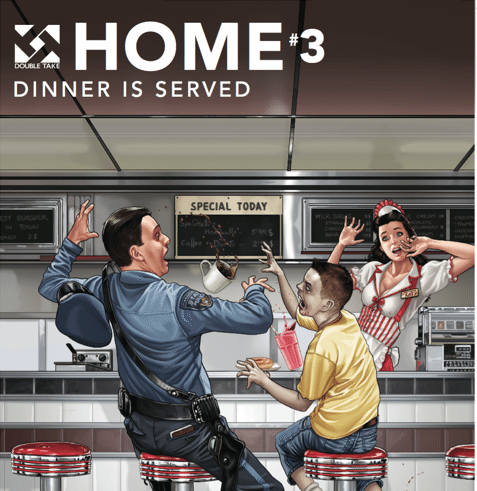 For those familiar with the comic medium, Double Take’s HOME by Michael Coast is not your standard fair. It is one of those books where you finish reading it and think to yourself, “what even happened this issue?” It isn’t that it’s ostensibly off-the-wall or anything. Sure, there’s a little girl with the mouth of a sailor, but on the whole, this book plays its hand a little closer to the chest. It isn’t going to announce its strangeness to you like some other books may. Coast instead chooses to let the reader engage more in the book to take in the humor of it.

READ: Our Review of HOME #2

That same feeling continues in HOME #3 where the zombie apocalypse is imminent and the entire town (minus Lisa Foster) is still completely oblivious. Unbeknownst to Tim, Linda, and John, there is a zombie on the Foster farm that’s making huge messes that the trio spend the issue cleaning. In town, the rest of the family waits in the doctor’s office while the infection and armageddon spreads outside. 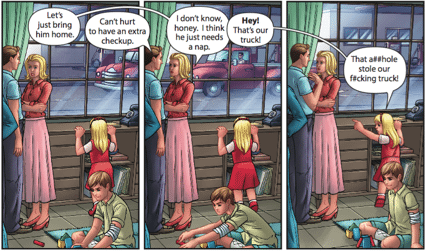 The thing is, on the surface, this story sounds just as unabashedly wacky as any Adam West Batman story, but it’s Coast’s execution that sets the book into firmly different territory. The book is absurd, insanely so, but not in pop-art glitz and glam, more in how it steeps these crazy elements into a fairly standard black tea of a setting. A perfect-looking family lives on a farm next to a quaint small town in the 1960s…and then the ravenous zombies make their stage entrance and shine a light on the absurdity of the basic premise.

Soo Lee’s art touches on that. There’s a lot of that glossy brightness and perfection that characterizes Grant Morrison’s ALL-STAR SUPERMAN. This choice of art provides a hilarious contrast to the darkly comical elements of HOME #3, most notably in its depiction of a maimed cow head. 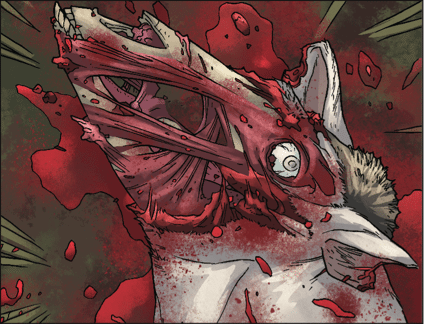 If most comic books strive for a large mainstream audience, HOME certainly sidesteps any attempt at that. HOME #3 is not an easy read in that it feels so completely banal which can feel a little disarming to a comic book reader used to seeing spandex and capes. This book’s a little more cynical than those types of books, but it drowns itself so deeply in its humor that it doesn’t bog down the reading.

So, if you’re up for a strange, but ultimately rewarding book, give HOME #3 a read. That’s what you’ll be getting.