With everyone’s favorite webslinger swinging back into theaters this July, ComicsVerse is taking a look back at SPIDER-MAN’s greatest adventures. From the big screen to the small screen to a simple comic panel, we will find out how this ol‘ Web Head has evolved since he first webbed his way into our imagination. In this piece, we’ll take a look at all of the different portrayals of live-action Peter Parkers through the years.

Whether you like it or not, Sam Raimi’s SPIDER-MAN changed the comic film landscape. The film remains the blueprint for modern superhero origin stories; many films parodied it and just as many memes were spawned from it. In a time before the Marvel Cinematic Universe, the Raimi Spidey films were it.

Since then we have had a reboot in Marc Webb’s THE AMAZING SPIDER-MAN and its sequel. Then fans saw dreams come true as Sony and Marvel made amends to include the webhead in CIVIL WAR. Each director has taken the character and made it their own, good or bad. Producers can work all the magic they want, but Spider-Man films come down to one character: Peter Parker.

At this point, Spider-Man has been played by three actors. Tobey Maguire, Andrew Garfield, and Tom Holland. Those are almost some Bond level numbers! With many actors in one role comes the classic discussion of who did it best. Depending on your preference, you might like the goofiness of Maguire — or maybe the deceptively charming Garfield in Webb’s films. Your favorite might never change, but no one actor has perfected the character of Peter Parker.

The first two Raimi films handled Peter and his relationships with the people around him near perfectly. In Raimi’s trilogy, Peter’s relationship with both Harry Osborn and Mary Jane Watson lies at its core. SPIDER-MAN built up a solid foundation for the franchise, with Willem Dafoe as Green Goblin/Norman Osborn in a delightfully hammy performance. The film was far from perfect, but the chemistry between Maguire, James Franco, and Kirsten Dunst was undeniable.

READ: Why SPIDER-MAN: HOMECOMING Feels Like A Miles Morales Story

A common theme in Spider-Man films has always been Peter making a family out of those around him. It is why Norman Osborn and Otto Octavius’s downfalls are so heartbreaking; Peter sees them as father figures. But it’s the Harry and Peter story grounds the trilogy in an intimate way, even more than Peter’s relationship with MJ.  The relationship is heartbreaking to watch, two best friends inevitably becoming enemies. When the moment does come in SPIDER-MAN 2, it feels earned; Franco’s rage making an already dark ending feel hopeless.

SPIDER-MAN 2 saw Raimi and Maguire in peak form, delivering what is, in my opinion, the best Spider-Man film. Doctor Octopus was the logical next step for Peter’s adversary, a man even smarter than Osborn who knew how to push Parker to his limit. Raimi’s direction along with Maguire’s charisma helped Spider-Man feel like the hero of New York City. This results in one of the best scenes in the entire Raimi trilogy: the train scene. The shot of Peter passing out after stopping the train and falling into the hands of those he saved to catch him before he falls is nothing short of perfect. 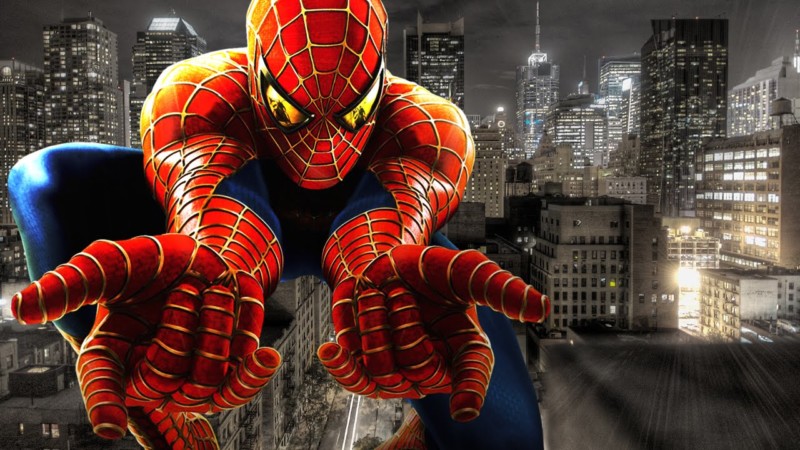 Maguire’s Peter was selfless above all, putting on the mask almost felt like a formality. Peter Parker was just as much a hero as the web slinger the city praised. Raimi’s first two Spidey films focused just as much on Peter as the popcorn flick action; something the fast-paced comic films today fails to replicate. Maguire knew that Spider-Man was nothing without the dweeb with a heart of gold underneath. Raimi’s vision was coming to fruition, and hopes were high for his third installment.

So comes the infamous SPIDER-MAN 3. The finale of the trilogy (despite Raimi’s vision for more sequels) is my least favorite Spidey film. Rife with behind the scenes issues of the studio pushing Venom as a villain resulted in an overfilled, over-CGI’d mess of a finale for what was once the shining example of superhero films. Juggling three villains in an already stuffed script apparently, does not make for amazing films. The biggest casualty was how Peter was handled in SPIDER-MAN 3.

…AKA the Downfall of Maguire’s Peter Parker

Defend emo-Peter all you want; it doesn’t matter if the symbiote changed his personality, that dancing on the sidewalk scene was and remains atrocious nearly a decade later. It threw a lot of what worked so well in the first two films out the window. The symbiote can explain Peter’s sudden mood change, but dumping MJ for Gwen Stacy was astoundingly out of character, no matter what space organism was influencing him.

Even the dichotomy of his relationship with Harry felt dull, Harry’s blind rage felt more annoying than anything, the most interesting plot of the franchise relegated to a boring subplot. Even the ending was cliche, with Harry sacrificing himself because he realizes his wrong-doings in the finale eye-roll inducing.

Worst of all was how Peters actions made it all the more obvious how boring he was as Spidey. Maguire’s aloofness as Peter finally bit him in the ass, as both the actor and script jumped the shark with what was once his best traits. When he was goofy and lovable, his Spidey felt like he was putting on the face he truly felt comfortable in. Maguire was never excellent in the suit, but SPIDER-MAN 3 made the character truly boring. Looking back, it is evident how much better Spider-Man was handled with the future actors, starting immediately with Andrew Garfield’s interpretation.

That brings us to the two films from Mark Webb: THE AMAZING SPIDER-MAN and its sequel. Where Maguire excelled outside of the suit almost more than inside it, Andrew Garfield’s Spidey plays it differently. Webb’s iteration of Spider-Man felt decidedly more “comic book” than Raimi’s vision.

READ: The Top Five Things to Get Excited For SPIDER-MAN: HOMECOMING!

To start, he was faster, stronger and leaner. The biggest and best change, however, was a full embrace of Spidey’s wit. Maguire’s Spider-Man was a true hero through and through, but his quick wit was lacking. Garfield brings the back and forth banter the web-slinger is known for in comics to the forefront, and it works in every way.

Garfield never quite embraced the character of Peter like Maguire did. Despite having excellent chemistry with Emma Stone’s Gwen Stacy, Garfield’s Peter was nothing new. His relationship with Gwen and her father felt like a more boring counterpart to Peter and the Osborns in SPIDER-MAN.

Both Webb films suffer overall from any interesting characters outside of Spidey. THE AMAZING SPIDER-MAN decided to tell the origin story all over again, hitting all the same notes as Raimi’s first go. The chemistry of the first trilogy’s three leads was sorely missed.

Garfield’s iteration of Peter was always more interesting in the Spidey suit. The banter between Spidey and his enemies, along with the improvements to his fighting style made Garfield a solid Spider-Man. Webb and Garfield nailed the comedy aspects of the character to a tee.

Garfield’s Peter felt decidedly more capable than Maguire’s. He was not only more intimidating in the Spidey suit, but his Peter had confidence that Maguire’s iteration did not obtain. It made his fight scenes more exciting, which counter-balanced the lack of any compelling drama outside of his life as Spider-Man.

Unfortunately, this confidence sometimes hurt his character.  Maguire’s Peter was an everyday kind of guy, Garfield’s was a pretty boy that happened to be a near-genius. It took away a lot of what makes Peter Parker so relatable. His relationship with Gwen never reached the emotional highs of Peter and Harry’s falling out or even the heartbreak of Peter turning down MJ after she professes her love. His problem as Peter is the same as the problem that rested at the center of both of the AMAZING films. They were trying to capture the magic of their predecessors but did not get to that point.

It felt like a lot more than just two years that Spidey swung in limbo between Sony and Marvel Studios. Lo and behold, Spider-Man made his big Marvel debut in CAPTAIN AMERICA: CIVIL WAR, and in a huge way. Tom Holland was only in the film briefly but stole the show from MCU heavy-hitters like Robert Downey Jr. and Chris Evans. His Spidey was a breath of fresh air in an otherwise dour movie, getting audiences amped for his first solo film outing.

As great as Holland is in the Spidey suit, we only really got glimpses of his Peter Parker. The interactions with Tony Stark were great — which is likely why Tony is featured so prominently in the trailers and posters. Tony as a father figure for Peter is the right way to go with it, seeing as up to this point in Peter’s film history, his father figures became his enemies. However, Stark seems to be featured prominently in HOMECOMING, which could be a hindrance in Peter’s development. Peter needs room to grow, and that can’t happen fluidly if Iron Man is flying alongside him the entire time.

His inclusion in the MCU is a huge deal, but HOMECOMING cannot jump the shark just yet. Yes, Spidey exists in the same universe as cosmic entities and talking raccoons, but his feature film return needs to remain grounded. Peter is still young and learning the ropes of being a hero, and HOMECOMING presents the perfect opportunity to “reboot” the character without an origin story holding back the script. HOMECOMING is the chance for Peter to grow on his own and slowly become a part of The Avengers.

The Good, the Bad, and the Spidey

There has yet to be a perfect Peter Parker, but there have certainly been some great actors in the role. Each has been good enough to stand on their own as one of the most popular characters in comic book history, even with great directors standing behind them. Peter is a difficult character to perfect. Each actor to tackle him so far has been unique, although there were always some bumps in the road.

Tobey Maguire started out strong. SPIDER-MAN told a classic origin story that still holds up today. It still boasts the cast that I immediately think of when talking about Spider-Man, thanks in part to an endearing performance by Maguire. Unfortunately, the trilogy’s finale turned a once relatable character into an egomaniac.

Andrew Garfield’s Peter was a different type of Peter; he was one that was more confident than Maguire’s. Garfield’s interpretation felt like a natural fit as the webhead. His Peter wasn’t afraid to show his wit in and out of the suit; he had a confidence audiences hadn’t seen in Peter up to this point. His Peter wasn’t given much room to grow due to a lack of a strong supporting cast and overfilled scripts. In the suit, he was much stronger than Maguire, but his plot-arcs outside of the Spidey suit don’t even compare.

Tom Holland has yet to prove himself. His scenes in CIVIL WAR were great, but also quite brief. The action being great wasn’t really up to him, that was just Russo Brothers magic. The biggest hurdle HOMECOMING has to jump is balancing Spidey with the MCU elements.

A lot of what trailers have shown off is a good start. He’s back in high-school, he is sacrificing himself for the people of NYC, and the back and forth while fighting is making a return. If Holland is able to bring the charisma of Maguire’s Peter, combined with the comic book action of Webb’s films, Holland could very well be the best iteration of Peter Parker yet.