Why Do Asian Characters Always Seem To Be In The Same Role?

EARTH TWO sparked a debate amongst comic book readers about whether or not this new universe was a good move in a more inclusive direction for their characters. DC does not have as many diverse characters as other companies, such as Marvel. It was a bold and righteous move towards creating a base for characters of different backgrounds. However, this move towards diversity may be unintentionally harming other minority groups. It is particularly harmful to people of Asian descent. Sam Zhao, Green Lantern’s boyfriend, is an Asian man who James Robinson unintentionally uses as a tool in order to progress Alan Scott’s storyline.

In order for this to work, there will be various examples of comparison from EARTH TWO. As a result, there are spoilers ahead.

The comic takes place on a second version of Earth. Here on Second Earth, there is no Wonder Woman, no Superman, and no Batman. This gives room for a new cast on center stage, producing a new story that is intriguing and illustrations that are appealing. The major players of the series are Green Lantern, Flash, and Hawkgirl. This action packed comic gave readers a new perspective of the DC universe, giving us a new power trinity. It also provided us with a diverse cast, topped off with Green Lantern coming out as gay. In EARTH TWO #2, Sam nonchalantly introduces to readers a normalized homosexual relationship. 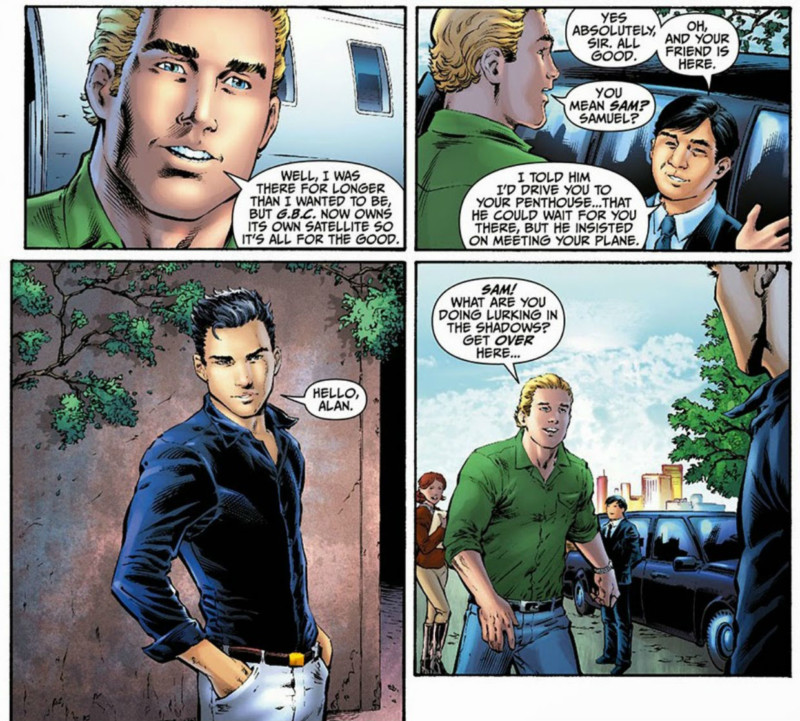 The casual introduction of the relationship begins by Green Lantern, who was in the airport in Hong Kong. His boyfriend decided to surprise him with a visit. The two meet and then embrace. Green Lantern and Sam’s relationship was not all that the pair was, but rather just a part of their personas. Green Lantern’s sexuality introduces the reader to how a nonchalant tone can normalize homosexuality. The handling of Green Lantern’s sexuality is important because it does not emphasize any sort of difference between homosexual characters and heterosexual characters. Rather than overtly highlighting his sexuality, Robinson normalizes it.

Creating a normalized relationship between Green Lantern and Sam Zhao is great. But it came at an expense.

Sam Zhao’s character, however, is problematic in how he is visually represented. While the pair is in Hong Kong, the reader can see different representations of people within the city. When comparing Sam to other Asian men in the panels, Sam is by far the most handsome. This perpetuates how Asian people are constantly being sexualized within media. The general depiction of Asian men are more feminine, having less sexual prowess, or as eunuchs in society. This emasculates them, taking away from their self-perceptions as men. Sam fits the profile of a superhero girlfriend rather than being a man of his own devices.

With his depiction as being more of a girlfriend in mind, comparing his role to that of Asian women is not necessarily that far-fetched. Societal stereotypes perceive Asian women as being sexually submissive and docile.  This representation seeps into the subconscious perceptions that people have of Asians, causing them to use these ideas while considering them normal and, even worse, true. Sam unintentionally adds to this trope by being a sexualized Asian character perceived by a blond, blue-eyed Western man.

As a gay, male character, Sam has also been emasculated. Not only is he extremely, even unrealistically handsome, but he also is physically smaller in stature than Green Lantern. Green Lantern towers over Sam’s small physique, creating an almost intimidating comparison between the two. Green Lantern is also the person to propose to Sam, which in turn makes Sam seem like he makes less of the choices within the relationship. This further takes away from Sam’s masculinity because of how society views the person that is proposing as being more masculine. This leaves the person accepting or declining the proposal as feminine. A common stereotype of Asian men is that they are not manly or virile in any way, which disempowers them to an even greater extent. Asian men are emasculate by the stereotypes of being nerdy, having small penis sizes, lacking sexuality, and being timid.

Movies like RUSH HOUR perpetuate this stereotype by having Jackie Chan be timid and quiet around women. Chan is unsure how to react or talk to women. Sam takes the role of being submissive by being the one that accepts the proposal. Maybe if Sam were the one to propose to Green Lantern, the distribution of power would have balanced out. Especially because it becomes a little close to assigning gender roles within their relationship. This is not always the case for every couple, be they homosexual or heterosexual. There does not have to be a “feminine” one or a “masculine” one. The relationship should be based on balance rather than dictating which gender role applies to each person. 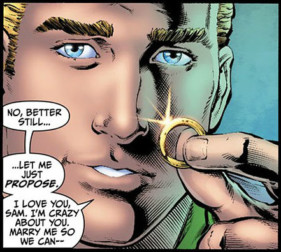 Although Green Lantern and Sam’s relationship was a good idea, Sam still had to be removed from the story.

Instead of being their own character, Asian side characters are often used as tools to progress the plot through their death. When Sam died, everything Green Lantern did became about Sam. Green Lantern wanted to avenge and/or honor to Sam’s memory. The Asian side character cannot survive if the protagonists’ plot is to continue. For example, the show Vikings had a side Asian woman for half of a season. In the show, the main character sexualized her, she gave the main character drugs that he became addicted to, and then he killed her. But he had to continue fighting while going through withdrawal. Sam was used as a sexualized character, gave Green Lantern a reason to continue the story, then Sam was killed off.

Sam is a mechanism that helps to continue the plot rather than being an individual. GREEN LANTERN: EARTH TWO is full of diverse characters with different backgrounds. It is important to be aware of how each character could fall into the pitfall of a perpetuating stereotype. Using Asian people as a way to progress the plot dehumanizes them. This turns them into tools to progress your own personal narrative instead of being their own person.