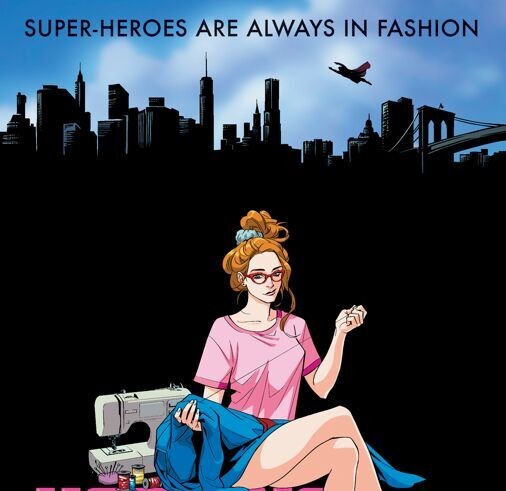 After such a fun and successful interview with indie comic book artist, Danielle Otrakji, I, Kay Honda, am back, once again, to interview a fantastic comic writer, David Tischman. He rose to popularity through his work with the TRUE BLOOD comic book series and has recently created an original web comics series, HEROINE CHIC, collaborating with newcomer artist Audrey Mok. HEROINE CHIC is not so much a web comic, but more of an interesting and unique kind of storytelling for an already exceptional/incomparable story subject. Let’s see what Kay has to ask the creative David Tischman about his original series!

READ: Looking for something new? Check out our analysis of the satiric and deeply intelligent comic book, THE MANHATTAN PROJECTS!

So help us welcome David Tischman, to an exclusive ComicsVerse interview about HEROINE CHIC, which is posted on webtoons.com. If you haven’t checked out what this website has done for independent comic writers and artists on the web, please, do as soon as possible! I can’t stress enough how many creatives are so grossly underrated in a world where we have everything at the ease of a button click.

1) Hi, hi, hi, David! How are you and welcome to ComicsVerse! So let me start off with some standard origin questions regarding your interest in comics as well as your work in comics. Can you give us a brief background?

Absolutely. My friend Daryl Hoyle introduced me to THE LEGION OF SUPER-HEROES in fourth grade, and I’ve been all-in ever since. Thank you, Daryl! The first comic book I bought was DETECTIVE COMICS #442, which, I think, was Alex Toth’s last work for DC. Anyway, a bunch of years later, a big bunch, Howard Chaykin and I were pitching a movie about P.T. Barnum and a bunch of circus freaks trying to save the US from an evil group of industrialists – and Nikola Tesla. When that didn’t sell, I said, let’s do it as a comic book. And that’s how I got into comics. Thank you, Howard! 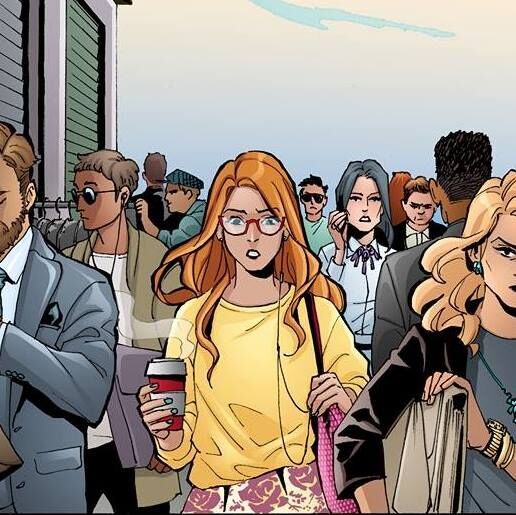 2) So you’ve launched HEROINE CHIC with Audrey Mok this past October and have dutifully produced a new chapter every Monday since. How is the process of working with Audrey Mok for producing so quickly for a webcomic? For someone who is unfamiliar with the production of webcomics, please let me and other newcomers know what the progression is like to get all the work done. Is it all finished before the weekly releases?

A normal person – a smarter person – would have launched with more chapters in the can. But HEROINE CHIC is a special idea, and we tinkered with it until we got it right. We’re still about two weeks ahead of publication. I’m in New York, Audrey’s in Hong Kong, our colorist, Tanya Horie, is in California, and our letterer, Taylor Esposito, is in Jersey. It starts with me, writing the scripts, and then Audrey and I work through a rough on the panels – and then all hell breaks loose. A tornado of e-mails of notes and revisions. And then it’s done and up. On Webtoons. All kidding aside, I like the immediacy of our process. The readers have been fantastic, and it’s great to be able to do last-minute tweaks to chapters that reflect readers’ comments – and world events. Webtoons is also great because of the direct and immediate dialogue we can have with the readers. I love that.

3) To get into the comic’s themes and motifs a little bit, what drew you to write a story line about the design and fashion of comic book heroes’ costumes? Did you always have a proclivity for fashion on a personal level? If not, what made you interested in exploring a storyline about it? 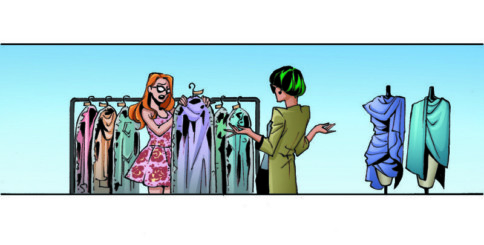 I watch PROJECT RUNWAY, I watched WHAT NOT TO WEAR. I watched the British version first, but I love Stacy London! And, of course, FASHION POLICE. Do I spend too much time watching TV? I tell this story, about seeing a woman in leggings and a sports bra, and realizing “that’s a super-hero costume!” It’s true. If you look at all the superhero movies and TV shows, they need to make those costumes work on the screen, they need to be functional (sorry Mr. Sinister, that cape thing has got to go!). At the same time, athletic wear is everywhere, and it’s moved so much into mainstream life. “Yoga pants” are the “jeans” of the 21st century. Put all that together, mix in a dash of Kelly Osborne talking about the line of a skirt and how the hair and accessories work with an outfit, and you have HEROINE CHIC.

4) On a personal level, I love your characterization of Zoe, our relatable and strong female protagonist! In a world where all forms of storytelling are often ignorant of or patronizing of a strong female character, I was happy to see that Zoe was a very realistic kind of girl living in NYC. As an NYC-native myself, I found Zoe’s low tolerance for BS refreshing in that she already had something that she felt more passionate about than her relationships with men. Was there any personal or purposeful reasons why you produced a character in this way, or was it instinctive, in a way?

REALLY good question. I’m so glad you asked that. There’s so much conversation about women characters and strong women and does this pass the Bechtel test….We’re all just people. Some of us have a penis, and some of us have a vagina. We all have boobs. Yes, there are unique aspects to male and female identity and society, but I just write Zoe as a person. It’s not about her being a young woman. It’s about her being young. Trying to figure out who she is and who she wants to be–and how she’s going to react when the world gives her a shitty day. HEROINE CHIC is about identity. Your secret identity. Who do you want to be? By the way, Zoe’s from L.A.!

5) Oops, my mistake! Urban living, though!

I’m sure I’m not the first interviewer to mention the parallels between your storyline’s idea to Edna Mode from THE INCREDIBLES Pixar movie, in the sense of a costume designer for superheroes. But what I feel stands out in your work is the sincerity in the story. The reality element makes me think of the reality TV show, KELL ON EARTH, in regards to young people trying to make their own way in the fashion industry under the direction of a very powerful fashion designer. Do you think that these kinds of mediums are influences, at all? If not, what did influence you in creating a story like this, especially in a web comic format?

“If you have to cry, go outside.” Exactly. Dyna Cuff, our super-hero costume designer, is far more Miranda Priestly from THE DEVIL WEARS PRADA than Edna Mode.  And Dyna’s not the only designer for super-heroes, by the way – keep reading. What I wanted was to show WAS someone in their first big job, the first job they actually give a shit about, the job that’s the foot in the door to what they really want to do. I had that job. I had that boss. The first three times I got yelled at, I screwed up, but the fourth time, I didn’t do anything wrong. What a huge awareness. It’s not me; it’s her. She’s crazy! I’m trying to convey some of that to HEROINE CHIC. Have you seen Refinery29’s web series, “Shitty Boyfriends”? The Sandra Oh character is that boss.

6) Of all comic book series, in both web and analog formats, I found that your writing for HEROINE CHIC to be refreshing in that the characterizations acknowledged some important yet simple options of same-sex relationships, as well as what some people think of as “subversive” to general culture in terms of human relationships. In a way, I find HEROINE CHIC to be extremely intuitive in its permutations of friendships and relationships in congruence to adapting to the world of superheroism. Do you think this was a purposeful choice on your part? If so, why do you think this is important?  If not, how do you feel that at least one person feels that way?

Our definition of gender and sexuality is just more fluid today, and people under 30 are far more accepting of race and preferences and all of the things that were considered “subversive” or even “abnormal” even 20 years ago. For example, one hero we introduce, Khatie, is transgender. She was born male but identifies and presents as a woman. Zoe, who likes boys, has also had some fun with girls. And putting these ideas into HEROINE CHIC is 100% intentional. It all speaks to that question: “Who am I?” Clothing is the way we present ourselves to the world. When you’re getting dressed in the morning, you’re trying to decide “Who am I going to be today” Who do you want to be?  Dress for the job you want. Also, one last thing, the friendship between Zoe and Laren, her roommate. I want to show a positive, strong relationship between two young women.  Women are not as horrible to each other as we see on TV.  That doesn’t mean there isn’t drama, but Zoe and Laren have each other’s backs. Always.

7) How close is your working relationship with your artist, Audrey Mok? I understand that the relationship varies depending on the person. Do you feel Audrey is a co-creator in that you guys work closely together in producing HEROINE CHIC, or is it a bit more of an interpretive exercise for the two of you? 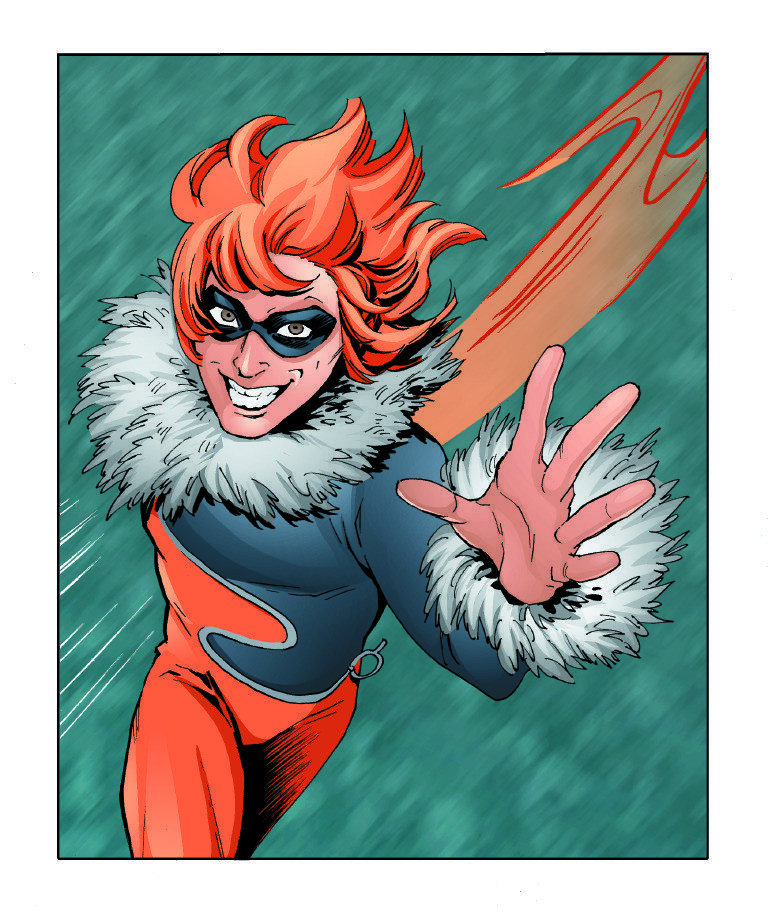 I have been lucky to work with some of the best artists in comics. J. H. Williams did the art on my first comic book. I got to work with Marshall Rogers. I did two projects with Philip Bond. And now Audrey Mok. This woman is just so incredible; I can’t even tell you. HEROINE CHIC is my idea, but every week Audrey pulls the idea out of my brain and puts it on the page – and makes me look fantastic. Our relationship is 99% on e-mail – we’ve had one phone call since we started working together, six months ago – and we are always on the same page about the look and feel of the panels and the story. How far is Hong Kong from New York? I’ll have to look that up, but the point is, we’re making it work. And Audrey makes the work fun. I can’t wait to wake up in the morning and see if there are new pages.

8) Finally, to sum up this conversation with you David, what kind of clothes do you feel the most comfortable producing in? If this question is obsolete, what is your favorite personal hero/superhero and why?

I usually don’t wear clothes when I work.

Well, I think that about wraps it up for us here at ComicsVerse. David Tischman, thank you again for taking the time to talk to me and answer my questions! Remember to check out his original web comic series on webtoons.com. They produce a new installation every Monday. It’s a fantastic read, and it’s a breath of fresh air in a world of generic superhero stories and exposes the brilliance and interesting dynamics of the fashion world that is often undermined. If you know what’s good for you, definitely check out the web series! You might just learn something.

Thanks so much, Kay. This has been great!