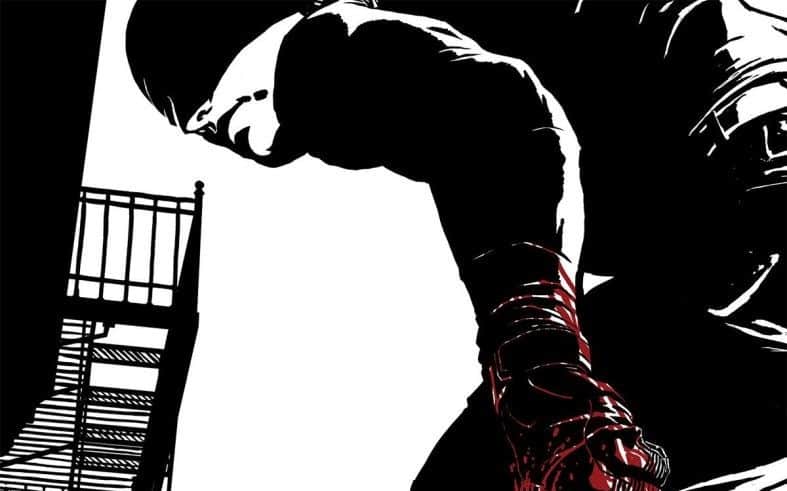 The Hero We Never Knew We Wanted – Netflix’s Daredevil Review

10 am on a Friday morning, I woke up to turn on my TV and PS4. I tuned into Netflix and started watching Daredevil. I went 13 consecutive rounds with this new original series; although I was KO’d in the first episode by how much I loved it. From the storytelling to the cast, this show embodies all that is Daredevil.

The cast is convincing and entertaining. Charlie Cox is Matt Murdock and Daredevil. His adaptation of Matt Murdock is perfect. He is headstrong about keeping his law practice for people who are innocent. This is the superhero mentality of Matt Murdock that can be often forgotten when talking about the character. Readers speak mostly about how Daredevil seeks justice, but the show and Cox do a great job to remind people that Matt is a hero in his own right. There will be times where Matt will take a case for the bad guys to only further Daredevil’s agendas. Cox nails Matt’s confidence and smooth talking as he hides his Daredevil schemes from Foggy and Karen with ease.

Cox does great showing Daredevil as a true beginning story. Cox goes through all the pain and tribulation of a hero starting out. You see Matt being exhausted and having doubts, which reminds us that Daredevil is a superhero, but he is still only human. Cox delivers the anger that fuels Daredevil well with strong dialogue and his aggressive approach to justice. Even though Daredevil wears a mask that covers 2/3 of his face, Cox can still convey emotions well by using his lips. It was a crazy ride watching Matt grow from black masked hero, to the addition and significance of the billy clubs, to achieving an understanding of what it is to be Daredevil (A ride I would do all over again anytime). Cox clearly has done his research and will assure you that he is Daredevil.

Vincent D’Onofrio brings a unique take to Wilson Fisk a.k.a. the Kingpin. He plays a manchild crime boss that will have viewers feeling both scared and a bit sorry for him. D’Onofrio does an amazing job at giving me reasons to like Fisk. He shows viewers how strong Fisk’s determination is in obtaining his goals such as going beyond normal measures to give Vanessa (Fisk’s love interest) the world. D’Onofrio’s acting has made me come to sympathize with Fisk, who I have previously known to be the worst person. The great part of D’Onofrio’s Fisk is the sudden moments of change that gives us a harsh look into the monster that lies underneath. The car scene in episode 4 is disturbingly captivating, and had me on my toes looking for what else he was capable of for the rest of the series. Fisk also has an issue of duality and determining who he really is. Like Matt, Fisk wants to change the city, but he will do anything that is necessary, including killing, even though he does not enjoy it. By the end, Fisk realizes who he really is, and D’Onofrio lays it all out in the final confrontation.

The casting is simply fantastic. Deborah Ann Woll as Karen shows us that there is a small darkness with her that she is hiding. On the surface she does a great job being the glue in the Matt and Foggy relationship. Scott Glenn as Stick was thrilling to watch. I got to learn how harsh a teacher he was to Matt and his feeling towards him. His one episode appearance teases a bigger involvement in the show’s future that I am hyped for. Rosario Dawson as Night Nurse nails the curiosity of the character and is a joy to watch. Elden Henson as Foggy is a great choice. He provides comedic and heartfelt moments to balance out the grittiness of the show. Ayelet Zurer as Vanessa is terrific and surprising. She truly is the woman behind the Fisk, as she is always pushing for him to achieve his best. Her acceptance of the life of crime was a little surprising, but it shows that she isn’t the good girl I initially though she was. Vondie Curtis-Hall as Ben Urich stays true to form as he doesn’t give up on exposing the truth. He shows us what an everyday hero can do. Then there are the breakout characters. Easily my favorite supporting cast: Bob Gunton as Owl and Toby Leonard Moore as Wesley. Gunton is always quick to wittily point out the flaws in Fisk’s plans and speak out. Each time I saw him on screen, I knew a good laugh will follow. Moore as Fisk’s assistant shows how much more deceptive and evil he is than Fisk. He is under handed and a bit creepy, and Moore’s portrayal sold me on him.

The show overall is a masterpiece. It uses Frank Miller’s and John Romita’s Daredevil: The Man Without Fear as the foundation. The show goes with the grittiness of that story as the world of Daredevil is dark and gruesome most of the times. One of the most recognizable contribution from Miller and Romita is Daredevil’s black costume. It is essential to selling the hero’s beginning because it is made up of things he found on the internet and was not something he’d sewn himself.  The costume is not the only thing that shows Daredevil is a rookie; his fighting scenes also shows how he is still learning. For the most part, Daredevil is dishing the beating, but not with ease. There are even a couple of run-ins with normal guys that give him a hard time.

Speaking of fighting, the fight scene choreographers are to be saluted. The fight scenes in the shows are spectacular. The first two episodes are filled with action-packed scenes that will get the adrenaline pumping, especially the hallway fight in episode 2. The camera crew did a great job complementing the action scenes with great and quick changing angles that made everything flow.Of course Daredevil is a vigilante of the night, but the first couple of episodes suffer a little from dark lighting in the fight scenes.  It was hard to follow the flow of the fights at time. However, as the show progressed, the lighting in those scenes got better.

Show runner Steven S. DeKnight and the writing team turned in amazing scripts and story progressions each episode. The first episode was about a murder case that  spun into the series’ larger overall story. The development of the characters and story  grew each episode with a natural progression. They mixed in Matt’s and Fisk’s past well with present day events. Seeing that Matt’s determination comes from his father was a nice touch. There are some intense plot twists that come in during the second half of the series that were shocking. I am sure these new developments will come into play again in the next season. There were moments where certain aspects were short handed, but it did not affect how I was enjoying the show. DeKnight uses the reveal of the Daredevil suit in the end as a symbolic gesture of Matt coming to term with what being Daredevil really means. The suit design is a refreshing update that had me clinching my fists from how much I liked it. In the end, nothing felt forced, which allow this series to exceed my expectations.

The finale of the first season opens the door to the future of Jessica Jones, Luke Cage, and the Iron Fist series. Spoiler Warning: The series ends with the defeat of Fisk. Now that there is no one sitting on top of crime, there will be a fallout that will lead to a battle for the city. Crime will increase and many different villains will appear competing for the title of Kingpin which will be too much for one hero to handle. This will give way for more street level heroes. Marvel Studios’ Head of Television, Jeph Loeb has promised that these series are all connected which can explain the appearance of the future Netflix series’ heroes in relations to Daredevil. The connection extents to the Marvel movie universe as well. There are several mentions of the existence of heroes like Iron Man and Thor in this world. The show even acknowledges the events that occurred during The Avengers by calling it “The Incident” which left the biggest happy grin on my face. Fisk will also be someone to keep your eye on since all these heroes have had their run in with him. He can be a reoccurring character in the other series that may bring the heroes together. Who knows, maybe a Heroes for Hire team up is not that far behind. If you pay close attention there were several Easter eggs that teased the upcoming series such as the Steel Serpent which is a character tied-in to Iron Fist. It makes you wonder- what is Marvel building with the connected universe? How will these Netflix shows affect the big screen as Agents of Shield has? Will Agents of Shield be involve with these shows? These are just a few questions to ponder over as we await the next series.

The series is off to a great start. Marvel and Netflix have struck gold. This series could be Marvel’s first step to gaining a better TV presence. Agents of Shield is a good show, but Daredevil has me wondering if the show could be greater if it had the same support and budget of Netflix. The DC Comics shows are still doing well, but the drama focused shows like Arrow may have trouble keeping up with this gritty street-level series. Not only has this series given me more faith in the other upcoming Netflix originals, but it has me extremely excited. Can’t wait!