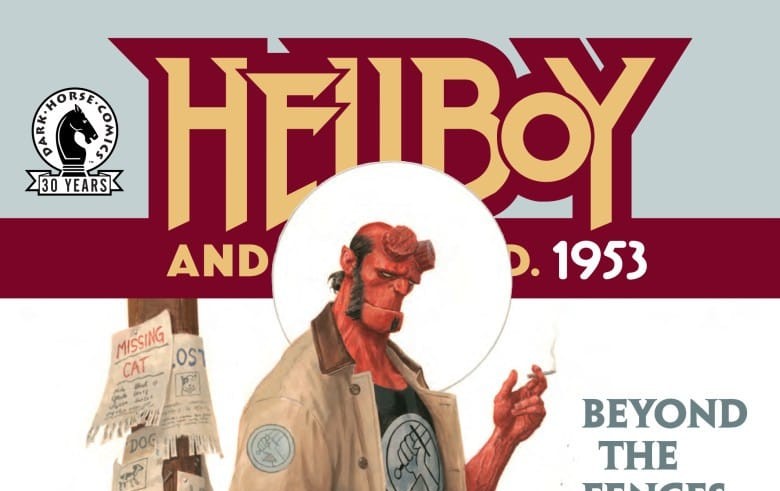 HELLBOY AND THE B.P.R.D 1953 has already led its readers through the depths of English folklore, across the blood-soaked battlefields of the Icenian uprising, and into the velvet parlors of an estate where long-forgotten evils awaken in the night. Now, the series presents a brand-new story arc which is as noteworthy as it is chilling.

The first issue of “Beyond the Fences” begins with one of the most stunning Hellboy covers in the canon. A departure from Mignola’s gothic style, Rivera invokes the saccharine realism of Norman Rockwell, fashioning a haunting tableau that sets the tone for the issue. The innocent curiosity of the children set against the stark, brooding figure of Hellboy reminds us not only of the naiveté of the young Hellboy himself, but of the fragile world he is trying to protect. The image also swells with tragic irony: If the B.P.R.D. is investigating your town, innocence is already lost.

All told, it’s an utterly masterful cover and, as such, a fitting debut for a debut team of creators; “Beyond the Fences” is the first Hellboy story arc featuring new co-writer Chris Roberson (iZOMBIE) and Eisner and Harvey award–winning artist Paolo Rivera (MYTHOS, DAREDEVIL). 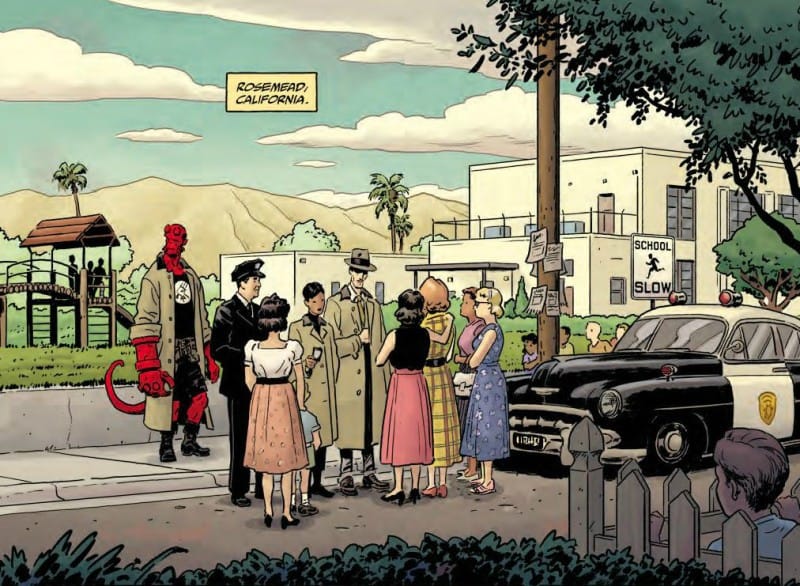 There is a startling crispness to Rivera’s art style. Gone are the brooding shadows and long impressionistic shapes of Mignola. There are no streets misty with gaslight. No cobwebbed undercrofts. Hellboy fans may at first balk at this contrast, especially considering the last HELLBOY AND THE B.P.R.D 1953 issues drew on the gothic sentiments of Mignola’s “The Corpse,” but what Rivera and the team are playing at is a game of nuance and a refreshing one at that.

Here, hidden beneath the optimistic sheen of this 1950s Levittown are subtle cues that suggest a festering terror. The sky is an unsettling mix of blue and grey, and the residents, though posturing in bright pastels and professional beige, wear faces strained with secret knowledge. There’s something more subtextual, more psychologically needling in the way the setting implies danger than the traditional environments of Hellboy-past—like a whisper, rather than a moan. In this way, the artists set the scene for an epic and frightening story using structures Hellboy fans have not seen before.

The narrative follows Hellboy and fellow B.P.R.D. investigators, Susan Xiang and Col. Jacob Stegner, as they look into a series of disappearances in a neighborhood that had never before had to lock its doors. Roberson proves himself a fantastic addition to the team writing compelling, natural dialogue that harmonizes with the issue’s satisfying narrative pacing. In a few lines, he renders these series stalwarts with familiarity and depth.

There’s Susan, who, while able to perceive the feelings and memories of others, isn’t relegated to the archetypal position of many empathic female characters in comics: the emotional translator for a stoic male bruiser. She has strength, a sharp wit, and intelligence. Moreover, there is a fascinating narrative energy in watching her grapple with the consequences of her newfound abilities as she struggles to understand whether her powers are just an isolating burden or the key to the B.P.R.D.’s survival.  In this way, she may even compete with the series’ namesake as the central figure of the series. Stegner is loud, flippant, and, at times, grating. But through Roberson’s deft characterization, you sense the integrity buried beneath his bravado. Hellboy’s character is similarly complex, albeit more openly so.

This is a younger version of the work-weary hero we see in Mignola’s first volumes and, as such, Hellboy in 1953 is more trusting and more willing to bare his soul. Still, we recognize the seed of the man he will become, and that’s what makes Roberson’s work and the concept of the B.P.R.D series so appealing. We get to see how that seed was watered. 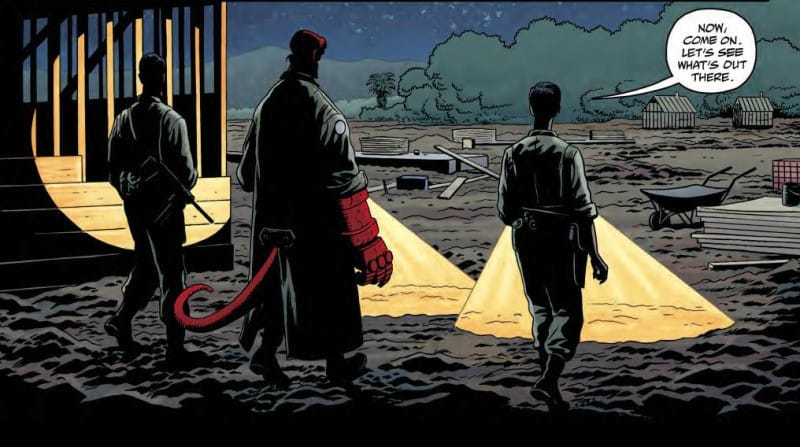 The initial installment of “Beyond the Fences” primarily sets the stage for a coming drama. What makes it worth every page is that this necessary exposition is couched in gorgeous art, deft dialogue, and satisfying pacing—a distinction to which not every comic book attempting an exposition-heavy issue can attest. As the issue concludes, Hellboy and the team chance upon one of the creatures terrorizing the town and make ready for a fight. This only confirms what the quality of the issue already suggests: the next installments are going to be fantastic.

Buoyed by Rivera’s incredible panel-work and thought-provoking colors by Dave Stewart, this is an issue that should not be ignored by Hellboy fans and, especially, fans of quality comic book art (collectors can look forward to an eye-popping mid-issue splash page and a gorgeous variant cover by David Mack). Don’t miss it!