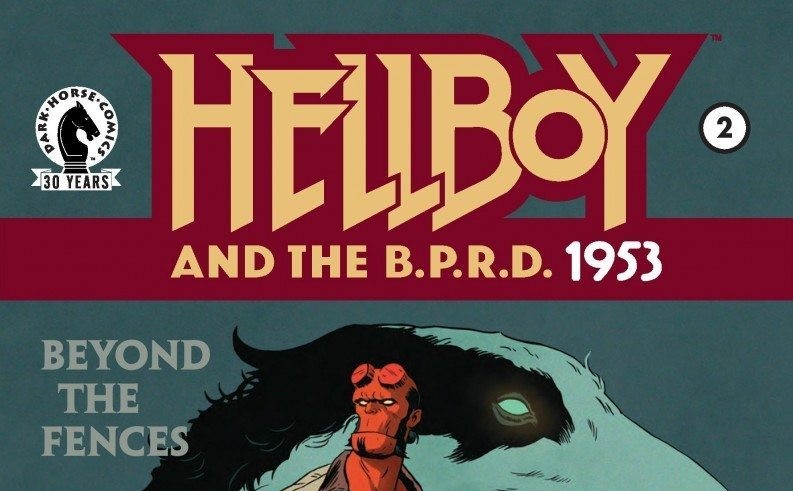 Hellboy holds his pistol steady as he locks eyes with a monster ten times his size. Its mouth drips with radioactive saliva, tongue lolling through teeth as thick as fenceposts and as sharp as diamond cutters. Hellboy doesn’t run. He doesn’t shudder. He only has one thing to say: “That’s far enough.”

This is the opening scene to this month’s issue, and let’s take a moment to appreciate the fact that it’s kickass.

Whereas the first installment of BEYOND THE FENCES set the plot simmering, HELLBOY AND THE B.P.R.D. 1953 #4 brings it to a boil.  Beginning exactly where the first issue left off, the narrative that follows is a tour de force: a flurry of spent clips, splintered wood, and screaming last stands. After tracking down the mutant they encountered in the final pages of issue one, Hellboy and the team quickly find themselves in over their heads, fighting a desperate battle against a creature more powerful and more sinister than they ever expected. 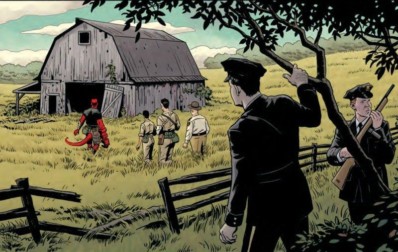 Maintaining the quality of the first installment in this three-issue arc, co-writer Chris Roberson (iZOMBIE) and penciler Paolo Rivera (MYTHOS, DAREDEVIL) gift readers with a HELLBOY story that is as distinctive as it is well-crafted. Notably, Roberson and Rivera defy conventions yet again by playing with an element that’s rarely questioned in most horror stories: the time of day.

READ: Missed our review of BEYOND THE FENCES #1? Click here now and learn how Rivera and Roberson shattered the status quo in HELLBOY AND THE B.P.R.D. 1953!

Evil finds an easy home in darkness. At night our senses fail, the unknown pervades, and our anxieties grow stronger. For this reason, daylight is often anathema to horror plots.  During the day, paranoia loosens its grip and phantoms lose the element of surprise. That’s why so many scary stories operate on a ‘survive until morning’ principle; in the light, we take our power back.

But what happens when the day is as dangerous as the night?

The answer: you’re screwed. This is the energy Roberson, Mignola, and Rivera draw on in BEYOND THE FENCES #2, and it’s a clever inversion of the genre’s most common trope which pays off mightily.  The fights don’t take place in shaded forests or crumbling tombs. They happen in open fields, amidst groups of onlookers. The powerlessness suggested by this setting makes for a truly chilling horror story, and one which leaves readers questioning whether the B.P.R.D. will actually prevail. 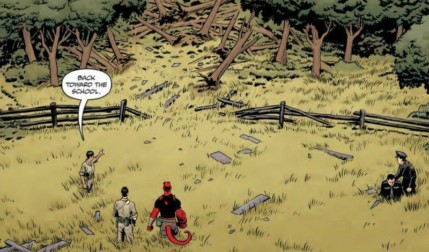 The choice of lighting also has thematic overtones. The setting of BEYOND THE FENCES is a peaceful 1950s town, a place where it seems nothing could ever go wrong. It’s a paragon of almost plasticine virtue—of forced purity in an effort to conform to an American ideal. To the naked eye, the town appears spotless. However, if BEYOND THE FENCES has a dominant message, it’s that even if there are no shadows, there can still be darkness. In fact, the evils you can’t see are sometimes the most powerful.

Where the comic gives readers a break from the action, it establishes brand new characters for the HELLBOY universe to explore. What makes these segments so compelling is that the characters established therein, namely the devilish Moravec, may be more menacing than the monster crying havoc in the fields outside of town. In this way, the issue builds itself a narrative scaffolding that has the potential to outlive the BEYOND THE FENCES mini-arc (which only has one more issue left). Debuting in these pages are figures that may go on to become villains, or heroes, of future B.P.R.D storylines.

Once again, the journey is enhanced by the crisp, highly detailed artwork of Paolo Rivera. Dave Stewart’s colors are icing on the cake. Where Stewart built a sense of foreboding in the last issue, here he provides a less nuanced palate in keeping with the action-packed content. Nevertheless, his work is as beautiful as ever. While Chris Roberson demonstrated he could write compelling character profiles last issue, in BEYOND THE FENCES #2, he shows his talent for scripting convincing, well-paced fight scenes. Each of these moments feels intensely cinematic and employs the liminal space between panels perfectly, so that no action is lost or confused.

HELLBOY AND THE B.P.R.D 1954 #4 is building a world you don’t want to ignore and doing so with a team of talent that makes it hard to. One minute with this book and you’ll be hooked. It’s an inter-dimensional sucker punch of Americana, occultism, and awesomeness straight to your eager face. From incompetent 1950s police detectives to Hellboy hockey checking demons, it’s got everything a growing fan needs and a diehard fan craves. Check it out!