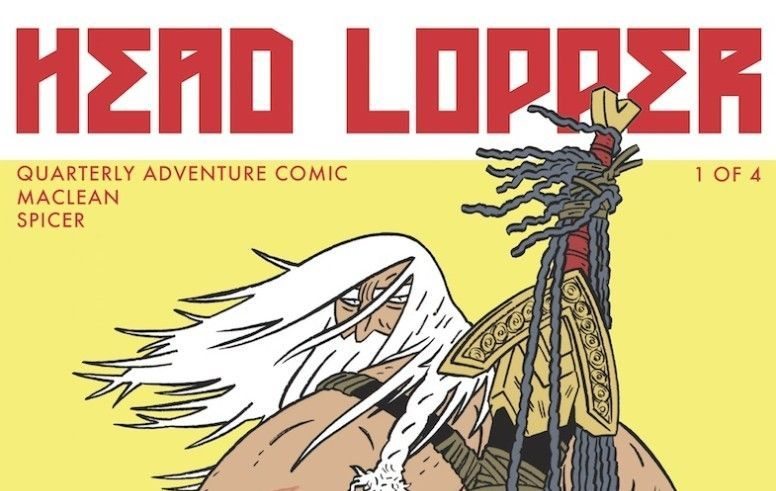 HEAD LOPPER #1 from Image Comics represents a collection of previously published indie comics by writer/artist Andrew Maclean (APOCALYPTIGIRL), and is described by the author as a “somewhat tongue-in-cheek swords and monsters comic.” While the book certainly fits the description, can HEAD LOPPER stand apart in the ever-popular field of dark fantasy? Here’s how I see it.

The first thing readers will notice when picking up a copy of HEAD LOPPER #1—aside from the highlighter-yellow cover—is that this single issue is roughly the size of a graphic novel. Clocking in at around 80 pages and featuring a pin-up gallery, this is a truly giant-sized offering priced at a completely reasonable $5.99. That isn’t sarcasm; this thing is worth every cent, trust me.

The story of #1 is divided into three parts: part one, wherein the legendary monster slayer and titular “head lopper” Norgal arrives at the isle of Barra and promptly beheads a giant sea monster with only a sword; part two, wherein an evil entity conspires to rob Norgal of his traveling companion, the severed and rather talkative head of Agatha Blue Witch; and part three, wherein Norgal fends off an attack by manflesh-craving beasts while being followed in secret by a pair of green-skinned individuals.

Each of the three parts reads like an adventure from THE WITCHER series of books and video games, from the epic monster-slashing to the white-haired hero of legend. With the book’s T rating, however, HEAD LOPPER lacks the gratuitous sex and nudity of THE WITCHER or other fantasy epics like “Game of Thrones.”

READ: Our Review Of DEADLY CLASS #16, Also From Image!

Much to his credit, Andrew Maclean has crafted something more enjoyable and (somewhat) light-hearted than those other works. With bits of humor sprinkled throught and colorfol artwork reminiscent of Mike Mignola (HELLBOY), this particular slice of sword-and-sorcery adventure appears to have been filtered through Cartoon Network’s “Adventure Time”. As a result, HEAD LOPPER is a welcome reprieve from the constant sense of doom and gloom that pervades so much of modern fantasy writing.

Action-packed, bloody, and sometimes humorous, HEAD LOPPER #1 is a solid fantasy epic the likes of which has to be seen to be believed. The only downside is the book’s quarterly release schedule, but having to wait three months for each of the remaining three issues will surely be worth it as long as the book’s quality persists.

And somehow I do believe it will.

CHECK OUT MORE ARTICLES FROM COMICSVERSE!