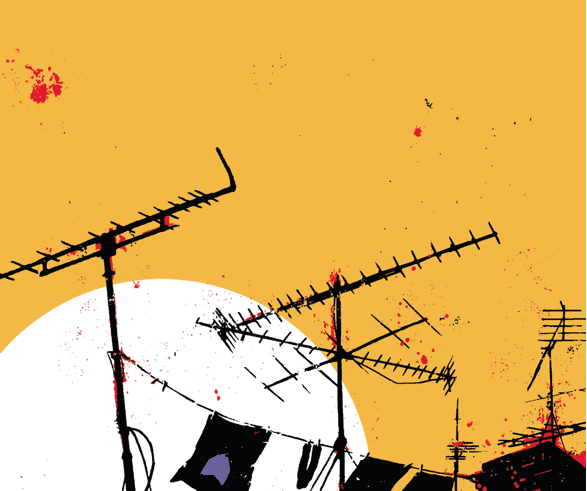 It’s finally here. The long anticipated finale of possibly one of the most consistent and best comic book runs in recent memory, HAWKEYE 22, has finally hit the stands. Even with months long delays, the creative team of Matt Fraction, David Aja, Matt Hollingsworth, and Chris Eliopoulos hit the bull’s-eye with this final issue. 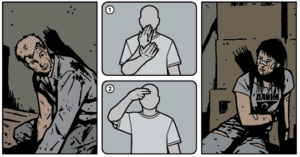 Matt Fraction, in possibly his last Marvel work for the foreseeable future, nails this issue. Fraction manages to walk an emotional tightrope throughout the whole issue. The reader gets the laugh at the pure hilarity of Ivan the “tracksuit Dracula” who manages to still be an intimidating foe even though the word bro seems to be the only word left in his vocabulary. One page is hilarious while the next page is gut wrenching and has me feeling like somebody plunged an arrow straight through my chest. In a series that was constantly plagued by delays, Fraction still writes as if no time has passed. Even though I can’t remember the last time I’ve read the last issue of HAWKEYE, Fraction wastes no time getting the reader caught up on who each character is of all that’s at stake in this final issue. Fraction also manages to expertly show how Clint deals with his deafness, which is put to great effect by letterer Chris Eliopoulos where words often read as a scrambled mess putting us in the shoes of someone who’s audibly impaired.

The art team of David Aja on pencils and Matt Hollingsworth on colors proves to show that this art team is one of the best in the business. Aja’s simple panel layouts lend a frenetic pace to the story, each page building up the tension with each panel. Even the smallest panels are packed with expressive faces and action packed sequences. Paired with colors by Matt Hollingsworth, the art gives off the feel of a movie from the 70s. Muted colors paint the main action sequences of the issue, giving off a real gritty and dirty feeling, which is exactly what I would expect to feel if I were in the middle of an explosive shoot out in a Brooklyn apartment. These tones are the contrasted with the deep purples that have become a staple of the book since its first issue. 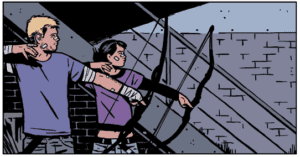 HAWKEYE has always been one of the best books Marvel has been releasing since its launch back in 2013. It’s rare to see a book so consistently good, and even rarer to see that book stick the landing. HAWKEYE 22 is a great finale to the tale of Clint Barton, Kate Bishop, and Pizza Dog and manages to wrap up everything with pinpoint accuracy.