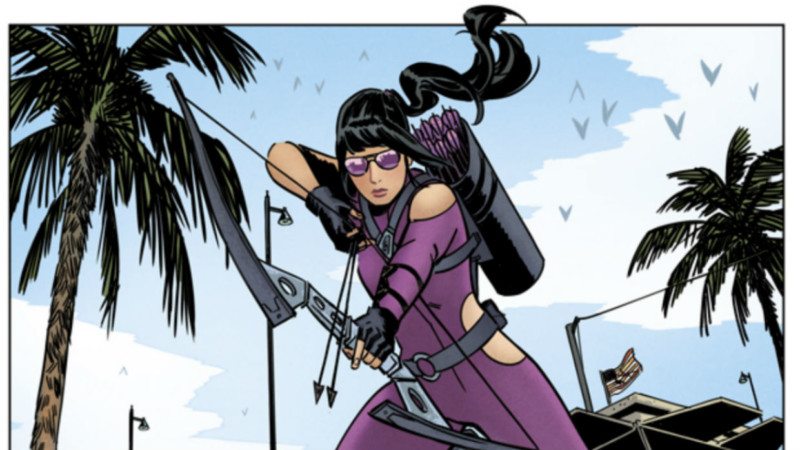 Making her solo entrance into this comic series is none other than Kate Bishop, the other Hawkeye. Instead of constantly saving Clint Barton, she now has her own heroics to focus on in HAWKEYE #1.

Kate’s story starts with her new hope of being a successful private investigator, even though she may or may not have the license for it. Based on the fact that she doesn’t have a formal sign, we can tell Kate’s business is fairly new and likely inspired by her friend Jessica Jones. One can assume the series will follow Kate as she learns to balance her P.I. work with her superhero crime-fighting. 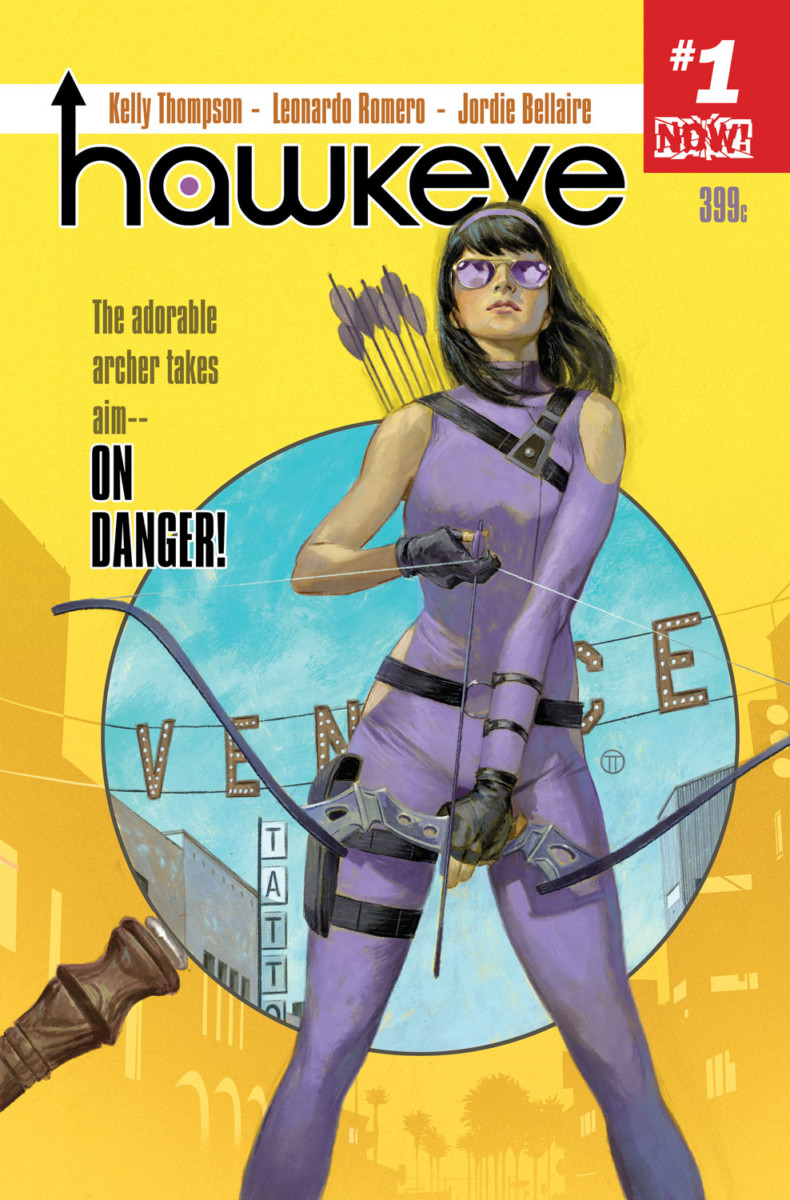 Though this struggle for balance is something we have seen in characters such as Jessica Jones, this series has the potential to explore it in a different way. Kate’s narrative is one that isn’t built around her super abilities (like Jessica’s), rather it’s about her using her personal training for good.

READ: Want to get a better understanding of the differences between Clint and Kate’s Hawkeyes? Take a look at our analysis of their portrayals!

The comic is written by Kelly Thompson, penciled by Leonardo Romero, and colored by Jordie Bellaire. This trio finally gives us the long awaited debut of Kate’s own story line. Originally we have only seen Kate Bishop in several issues of the 2005 run of YOUNG AVENGERS, as well as her appearance along side Clint in ALL-NEW HAWKEYE.

Thompson’s writing delivers a funny and sassy protagonist who isn’t afraid to show people she means business. Kate is written as a fierce character, but this comes with the understanding that there is still room for improvement in her heroine exploits.  After all, this is her very first issue for her solo journey, so we can expect to see her make plenty of rookie mistakes. She hasn’t worked alone, so there is a pretty large learning curve she must tackle. Regardless, Thompson works wonders with her writing in reintroducing the audience to Kate’s character. She creates a female protagonist who is confident and full of herself, mainly due to the fact that she has had plenty of experience with the Avengers — young and old. Based on the events of this issue, Kate’s ego may be brought down significantly. 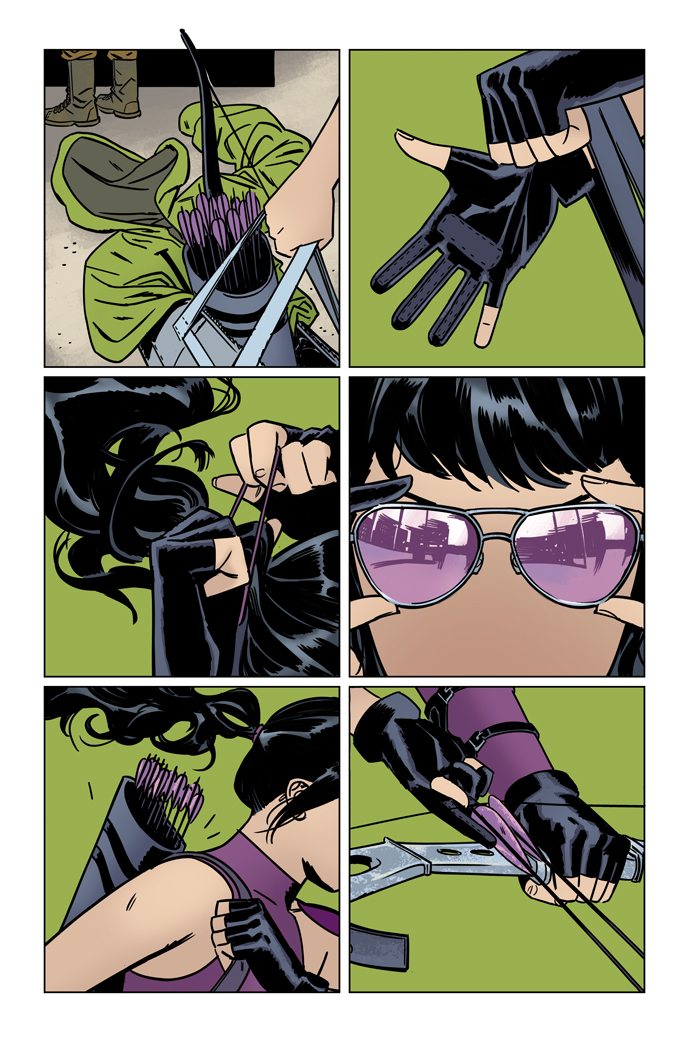 Artist Leonard Romero’s style for this comic is edgy, and fitting of the story being told. Looking at his art made me feel as though I had been watching an episode of Veronica Mars, mainly because the panels felt so cinematic. You can even see this in the image above. Each panel comes together in a way deserving of a television montage. This was to the point that I had imagined a score to go along with the pages. It’s not a typical art style we would expect for a super-heroine story. Perhaps it’s because Kate Bishop’s Hawkeye isn’t the typical hero.

Jordie Bellaire’s coloring for this comic also adds plenty of detail, not only to the city of LA, but also to Kate’s possible obsession with all things purple. The usage of purple for items such as Kate’s phone, her client’s hoodie, and Ramone’s hair, are all purposefully done to show their importance. It’s a great way of implementing the color most associated with the Hawkeye character. 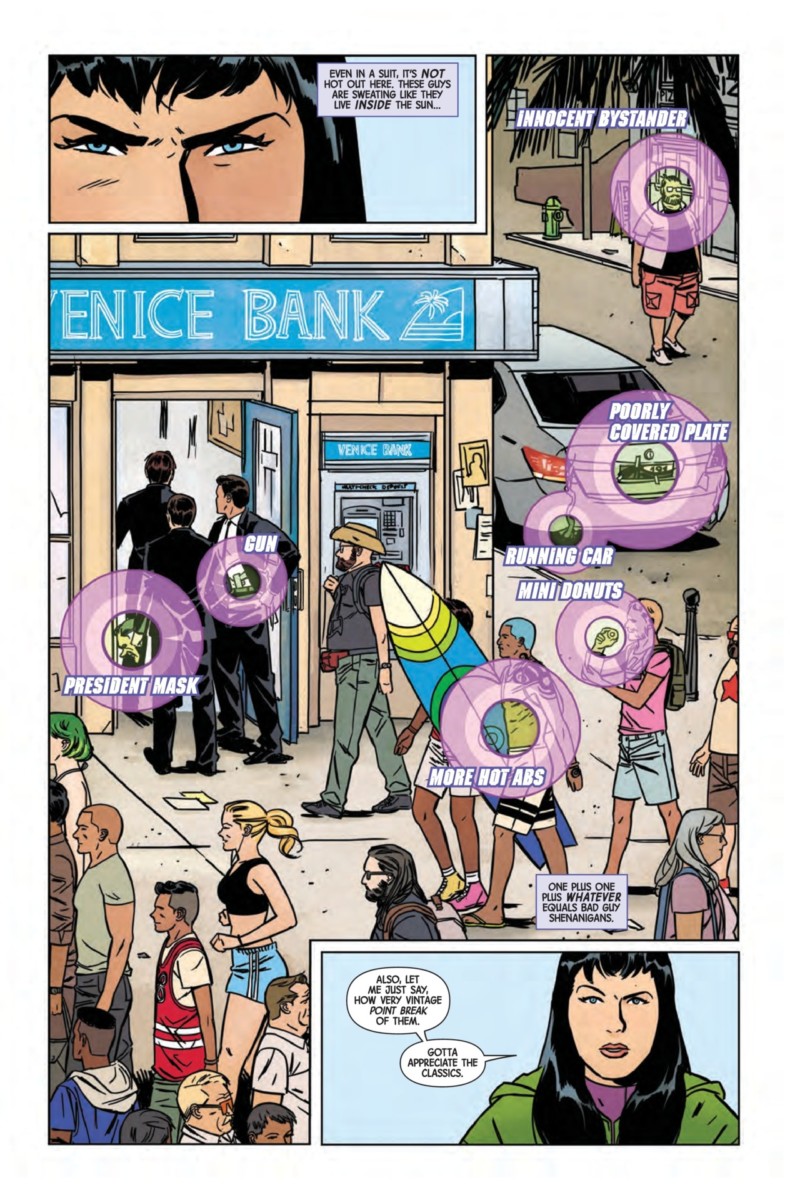 What makes this style so relatable is the fact that we’re not watching her fight villains with outrageous abilities. We’re also not seeing her fly through the air. Instead we see her stopping thieves in president masks or talk to potential clients who are confusing her for Clint. It’s the awesome design for this story that brings the well needed sense of realism for her character.

I’m looking forward to seeing what Thompson, Romero, and Bellaire will continue to do with this character. Also, how far they are willing to go? Maybe they will prove to us that she isn’t just the other Hawkeye of Marvel. Maybe she can be more than that.

READ: Want to learn more about Kate’s dynamic with the original Hawkeye Clint? Take a look at our review of ALL-NEW HAWKEYE #1 & #2!

What are your thoughts on Kate Bishop’s Hawkeye getting her own solo series? Let us know in the comments below!