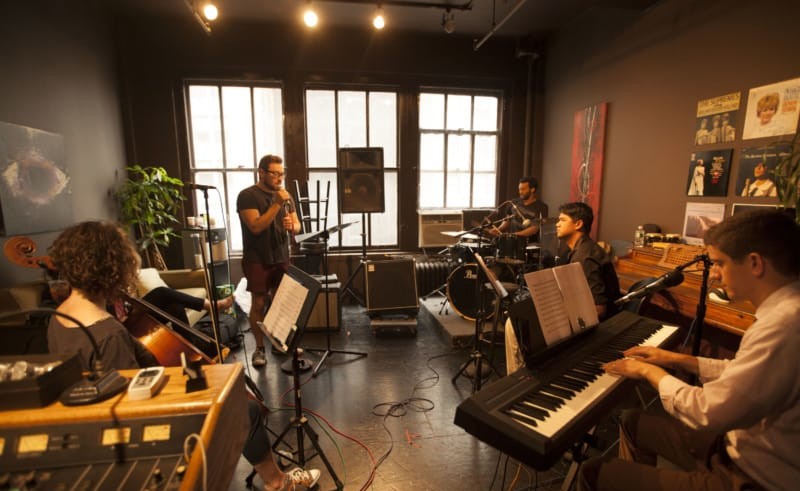 Eliot Glazer has had massive success writing on hit shows BROAD CITY, NEW GIRL, and YOUNGER, but those majors projects never stopped him from doing his own thing. Eliot Glazer’s HAUNTING RENDITIONS takes forgotten pop music and transforms it into a vivacious art performance. As the show continues to grow, so does the tour, so be sure to check dates and locations on the website, Facebook, Twitter, or Instagram. Who doesn’t want to hear “bad songs made good?”

ComicsVerse: How did you get involved working in entertainment?

Eliot Glazer: My sister and I did improv at the Upright Citizens Brigade Theater in New York. That’s where we had a long-running sketch show that introduced us to the comedy community. Eventually, I worked my way into television by “punching up” jokes on a script for a show called YOUNGER that was being produced by Darren Star for TV Land. He liked my jokes so much, he hired me as a writer on the show.

CV: How has the experience been writing for major sitcoms BROAD CITY and NEW GIRL been for you?

EG: Really enlightening! Every show is different, and every show brings with it its own family dynamic. But I’ve been lucky to work alongside amazing people on every show.

CV: How has that experience affected HAUNTING RENDITIONS?

EG: It’s given me room to separate how I channel comedy. When I write for TV, I’m accessing different ways of packaging jokes than when I’m doing it for myself on a stage with a band.

CV: What do you get out of writing versus performing?

EG: Writing for other characters takes the onus off me. As a performer, every move counts. As a writer, you get to see how another performer takes your work and interprets it in a way that can be super exciting (or — once in a while — not so much).

CV: How did HAUNTING RENDITIONS get brought together? How was it inspired?

EG: My friend Seth Keim (Seth works on Jimmy Fallon) — who I grew up with — produced a web series version with me. I’d had the idea for a long time, but I needed Seth (and Mike Fram, who helped arrange all the songs and play the piano) to bring it to life. And the live version of the show was a natural step. We started in a small venue with a small audience, and as the show evolved, it continued to have a wider reach. And it’s been 3 years now!

CV: What makes reinventing songs special to you? Do you find nostalgia being an impactful presence in your creative process?

EG: I think it’s the ability to marry music and comedy in a way that’s different from most “musical comedy.” I wouldn’t even consider it “musical comedy” because the show isn’t quite parody and isn’t quite satire. It’s a weird mix and it’s the nostalgic factor that people really respond to, specifically because the songs have just fallen outside your periphery. It’s music that you haven’t thought about in a long time.

CV: Any particular performance or song you enjoy doing the most?

EG: I love doing “La La” by Ashlee Simpson. I could write a thesis on her career. It’s baffling. She was a pop star created by an MTV reality show, but the main gist of the show was that she couldn’t sing. And then her career fell apart on live TV. It’s like a modern Greek tragedy.

CV: Who’s been your favorite guest performer and who is your dream guest?

EG: My favorite guest would have to be my friend Abbi Jacobson. She reprised her alter ego, “Val,” from Broad City and I couldn’t stop laughing the entire time. My dream guest is Erykah Badu. She’s a masterful musician and I’ve been a fan since high school, but she’s also proven herself to be really fucking funny.

CV: What has been the most rewarding aspect of your career and HAUNTING RENDITIONS, so far?

EG: There isn’t one particular moment. It’s a cumulative feeling — every show seems to get better and better, and not just because of me. My relationship with the band, with Mike (the bandleader), with guests and the audience — it feels more natural with every show and that’s honestly the most rewarding part: feeling the show find its groove.