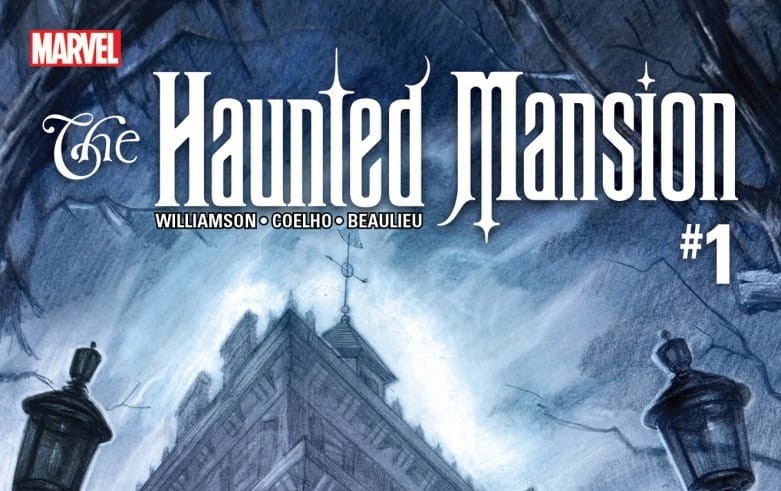 Based upon the Disneyland Attraction, HAUNTED MANSION is the newest comic in the Disney Kingdoms imprint at Marvel. Written by Joshua Williamson with art by Jorge Coelho and colors by Jean-Francois Beaulieu, HAUNTED MANSION #1 tells the story of Danny, a young teen, who is filled with grief and fear. The fear comes from his social awkwardness and anxiety. His grief… well, I don’t want to ruin that aspect of the story. It’s enough to say that the first four pages are a mixture of love, joy, and unexpected tragedy. Danny has always been curious about the old abandoned Mansion in the town, and when a mysterious female voice cries out for help he must overcome his insecurities and emotions to step inside its haunted walls. 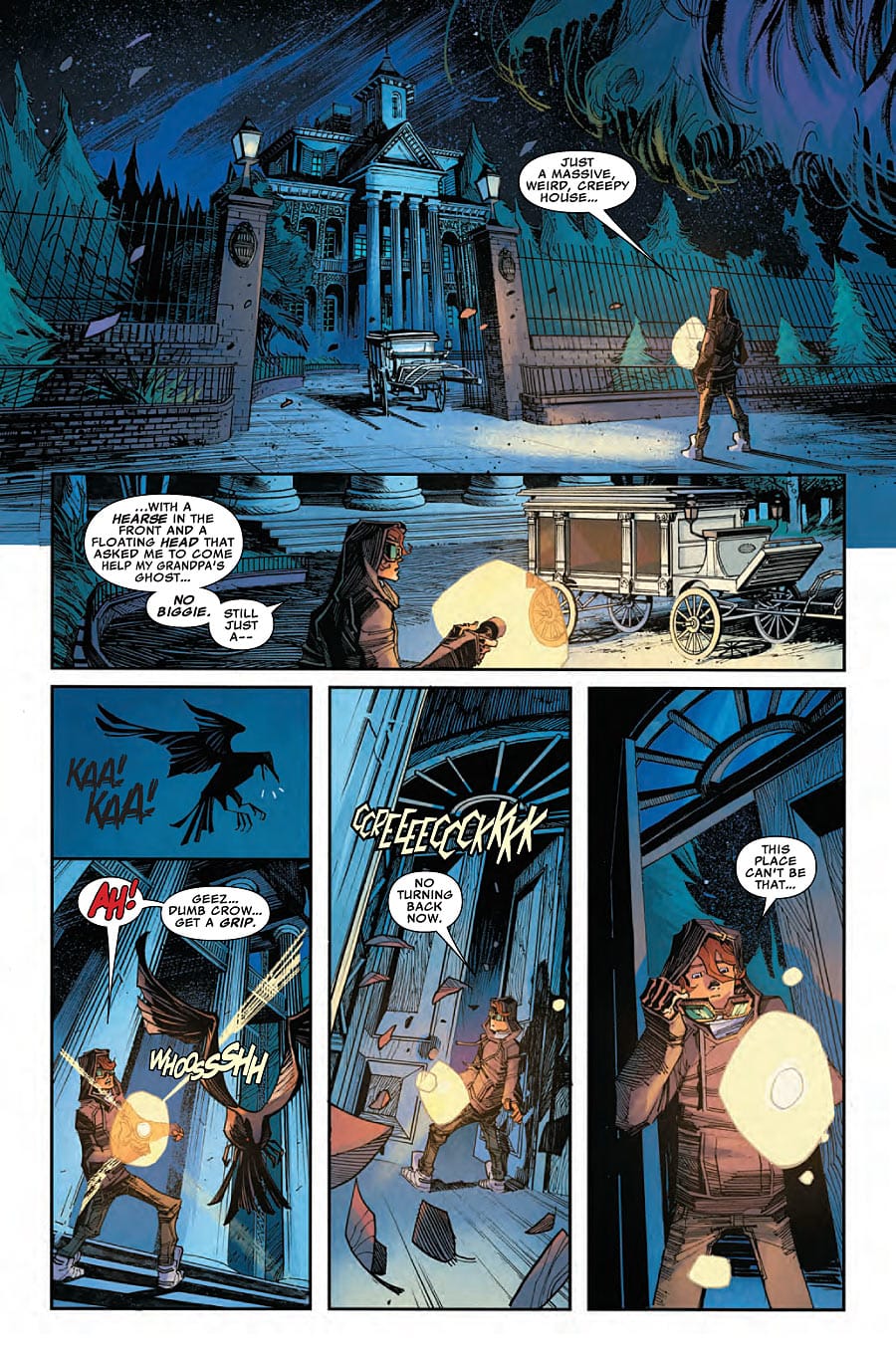 While it’s an all-ages comic, HAUNTED MANSION manages to really pull at the heart strings and teach lessons about fear and life. At the same time, it’s a fun adventure story set in a decrepit mansion full of ghosts and monsters. Joshua Williamson seems the perfect choice to write this book. He’s made engaging forays into the horror/fantasy genre before with NAILBITER and BIRTHRIGHT, and HAUNTED MANSION is no different.

And he does a strong job of creating a protagonist in Danny that we empathize with almost straight away. His relationship with his Grandpa is also overwhelmingly sweet. His Grandpa encourages and challenges him to have fun and start living life, and there is genuine love and respect between the two of them. Grandpa can see there is an adventurer in Danny, if only he could get past his fears. It’s only when a mysterious voice tells Danny to go to the mansion that he begins to face his fears.

When Danny finally steps inside the mansion, Williamson gets to really stretch his imagination with a tale full of scares and jumps. There’s also a tremendous sense of fun as Danny is chased by creatures of the night while trying to find the source of the voice. My personal highlight was a ghost conjuring spell used near the end of the issue which was full of clever visuals and great wordplay.

READ: Looking for something a bit more…sinister? Read our review of NAILBITER #20!

Jorge Coelho brings a crazy angular edge to the art. When the issue begins, the art is quite straight forward; nice thin lines with some sketchy pencilling. But as the issue progresses and Danny enters the Mansion, Coelho’s use of perspective comes into play. We are treated to creepy hallways stretching out to infinity, disturbing paintings looming over Danny, and terrifying ghosts that don’t play well with the laws of physics. The angles he uses shift, jumping from wide shots of cobweb-infested rooms to tight overhead shots, yet the changes never feel jarring. It just conveys a great story. 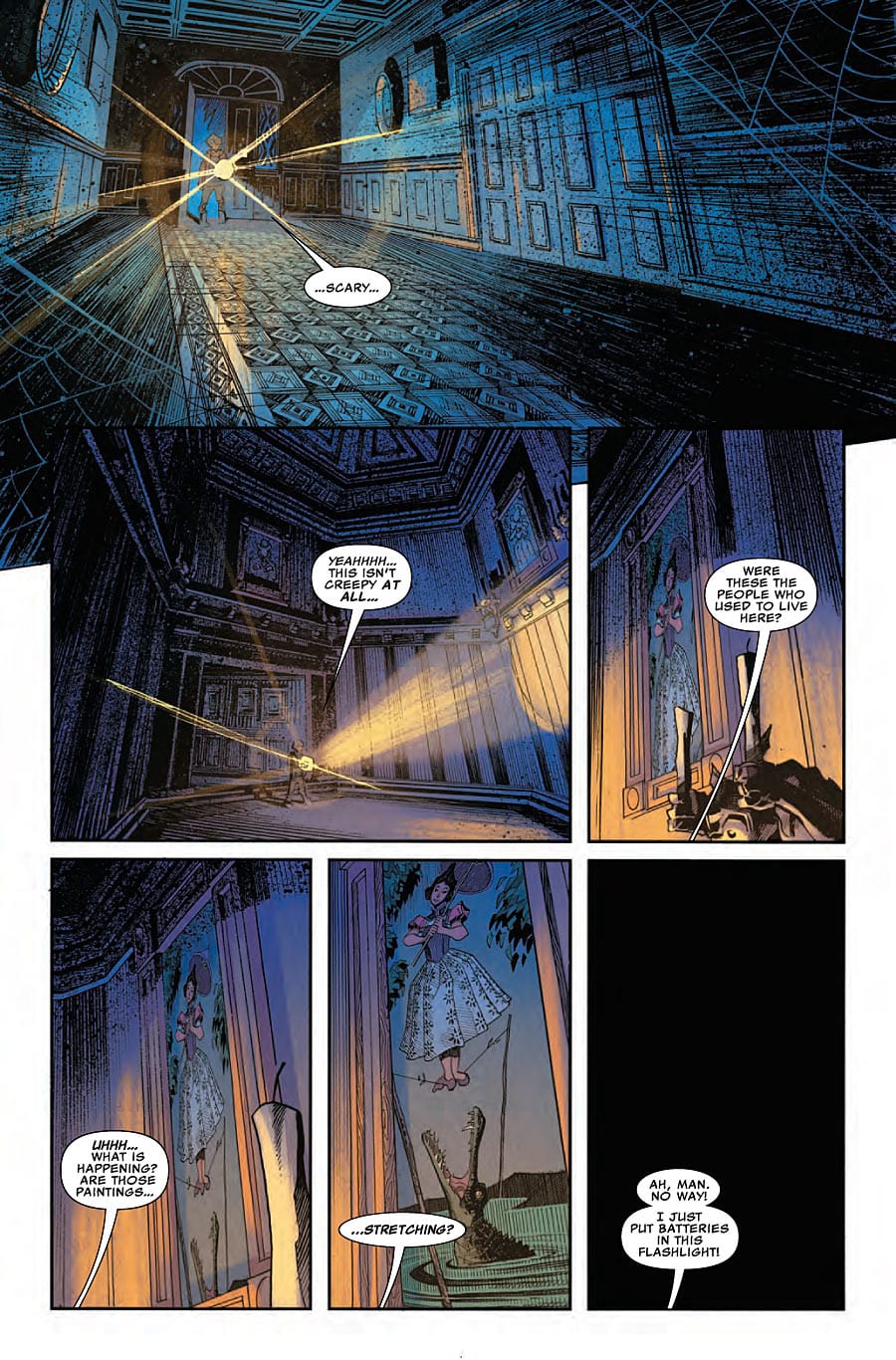 Speaking of great storytelling, Jean-Francois Beaulieu’s colors bring so much to the book. The dark oranges and purples of his dusk suggest that the sun is setting on Danny’s old life. Then his venture into the mansion is bathed in the dark blue of the night. The color tells a story all of its own. With so much happening on each page, I feel like it would be a difficult job to letter the book, but VC’s Joe Caramagna does this incredibly well, making the dialogue flow and giving each scene its own beat with well-placed word balloons.

ENGAGE: Like the issue? Have your say on our forums!

Overall, HAUNTED MANSION #1 is a strong debut for the series. There are times when the writing lends itself to the younger age bracket, explaining things that are happening in each panel, but that could be because it wasn’t specifically written with people of my age in mind. However, this is a very minor quibble, as it’s great to see more comics released for the all-ages market. Visually interesting and tons of fun, HAUNTED MANSION #1 is a spookily good time.