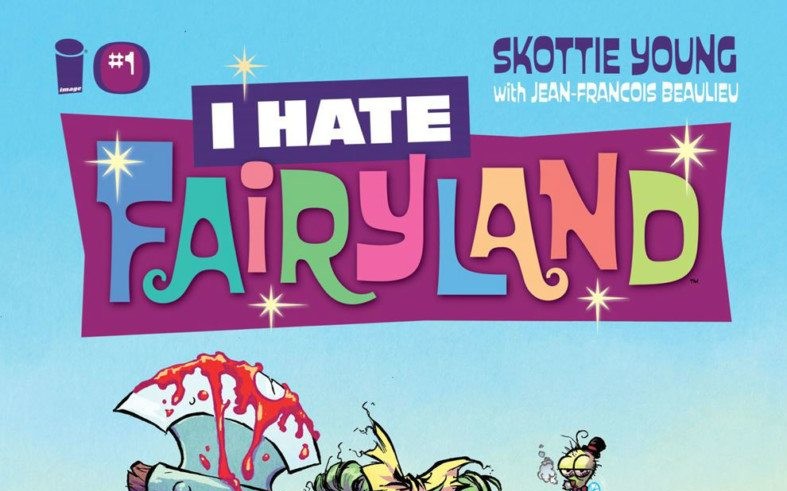 I HATE FAIRYLAND is the brainchild of acclaimed Marvel writer/artist Skottie Young. Young stamped his name on the comics industry with his Marvel baby variant covers. I HATE FAIRYLAND is his creator-owned book out now with Image. It follows the adventures of young Gertrude, who always dreamed of being transported to a world full of magic and wonder. One day, she is. She is told she must find a key and unlock a door to be sent back home by the Queen of Fairyland, Cloudia.

Gertrude then spends twenty-seven years searching for this key, during which time she doesn’t age. She’s accompanied by a washed up Jiminy Cricket-type being, Larry. She becomes frustrated at her fruitless search and begins trying to slaughter her way out of Fairyland. Gertrude combats the sickening cuteness seen around her with even more sickening violence. It’s like Tarantino meets Teletubbies. 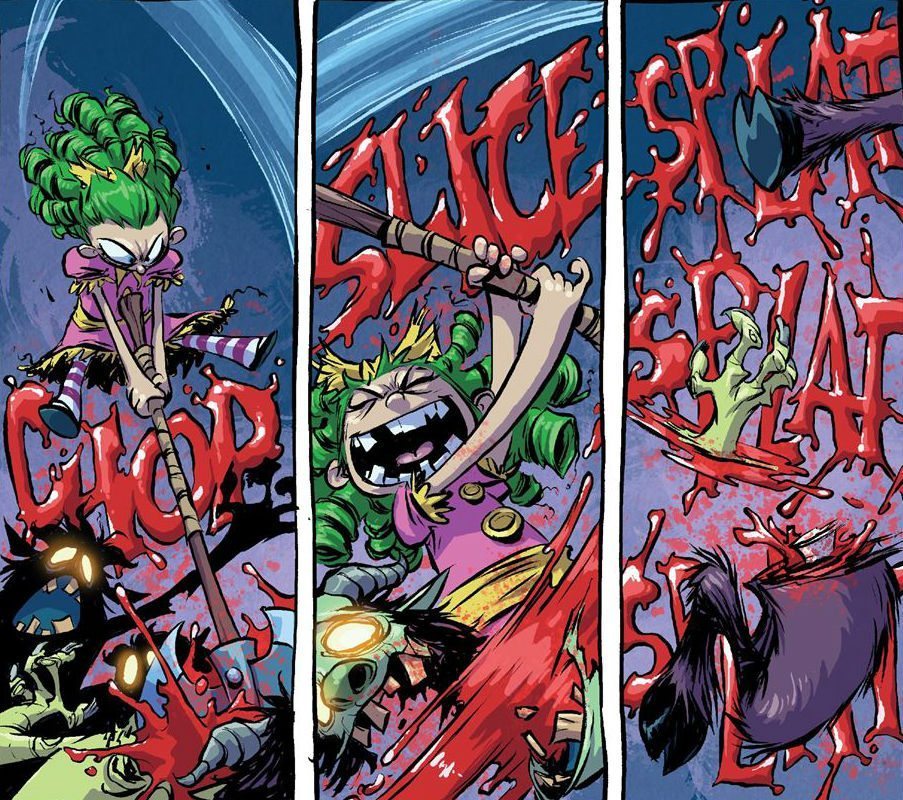 I HATE FAIRYLAND has become known for this signature blend of adorable destruction, and it’s what makes the book so unique. The juxtaposition of artistic elements between carnage and cuddly cuteness is as spectacular as it is jarring. Every panel has so much detail and action that it begs a second look, while the cartoony elements make it difficult to not burst out laughing.

This juxtaposition also adds a lot of humor to the writing. Gertrude despises all the rhetoric from the other denizens of Fairyland. But she’s guilty of this cutesy language as well. She curses them out, but Fairyland-style, i.e “what the fluff?”. My favorite example of this is from the first issue when she is first magically transported to this world of candy and rainbows. 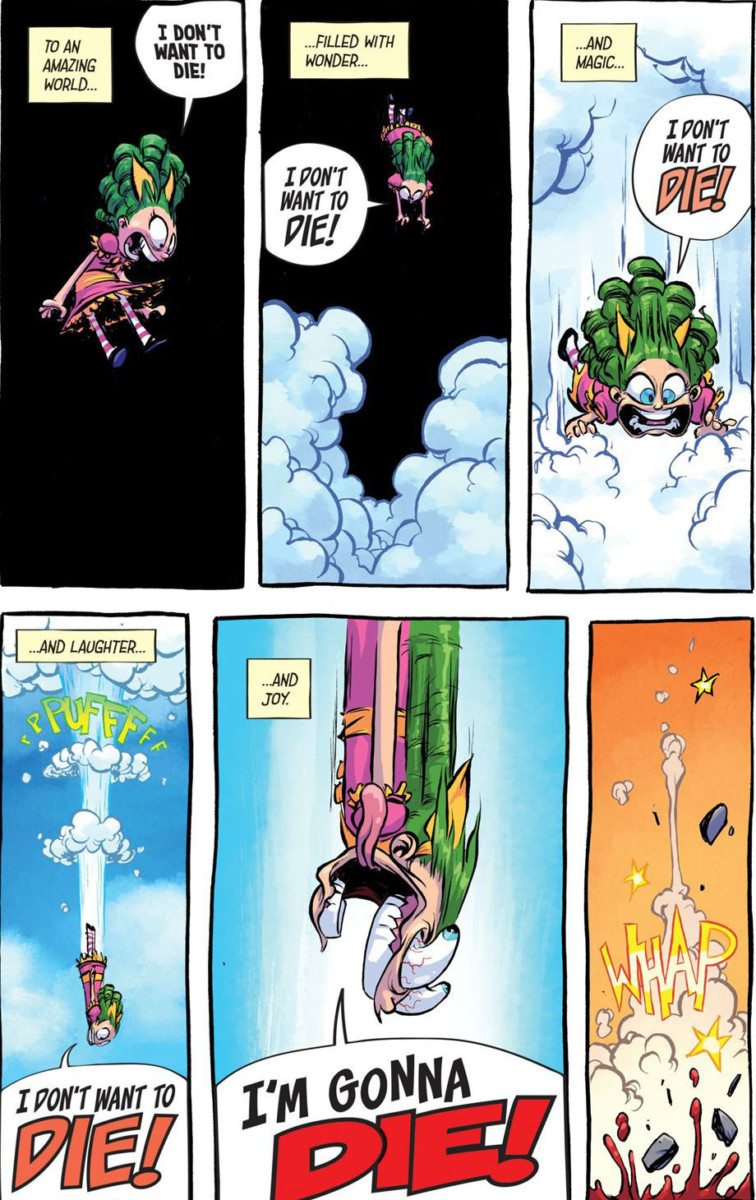 Of course she survives all the impacts she suffers while in Fairyland in classic cartoon walk-away-from-getting-a-piano-dropped-on-you style. Fairyland residents on the business end of her battleaxe aren’t as lucky.

Skottie Young is an amazing artist, we all know that. I’ve loved all of his variants and writing for Marvel. Any one of his titles are great in their own right. But what makes this book special is that Image has given him permission to let loose. He’s able to write and draw the story exactly how he wants it done. To me, comics like I HATE FAIRYLAND are the zenith of indie publishing. These projects give creators the freedom to pursue the stories they want to tell most with characters they’ve created instead of taking over on a previously established superhero franchise. Young does a great job with ROCKET RACCOON AND GROOT, but I still prefer this because I’ve never read anything like it before. 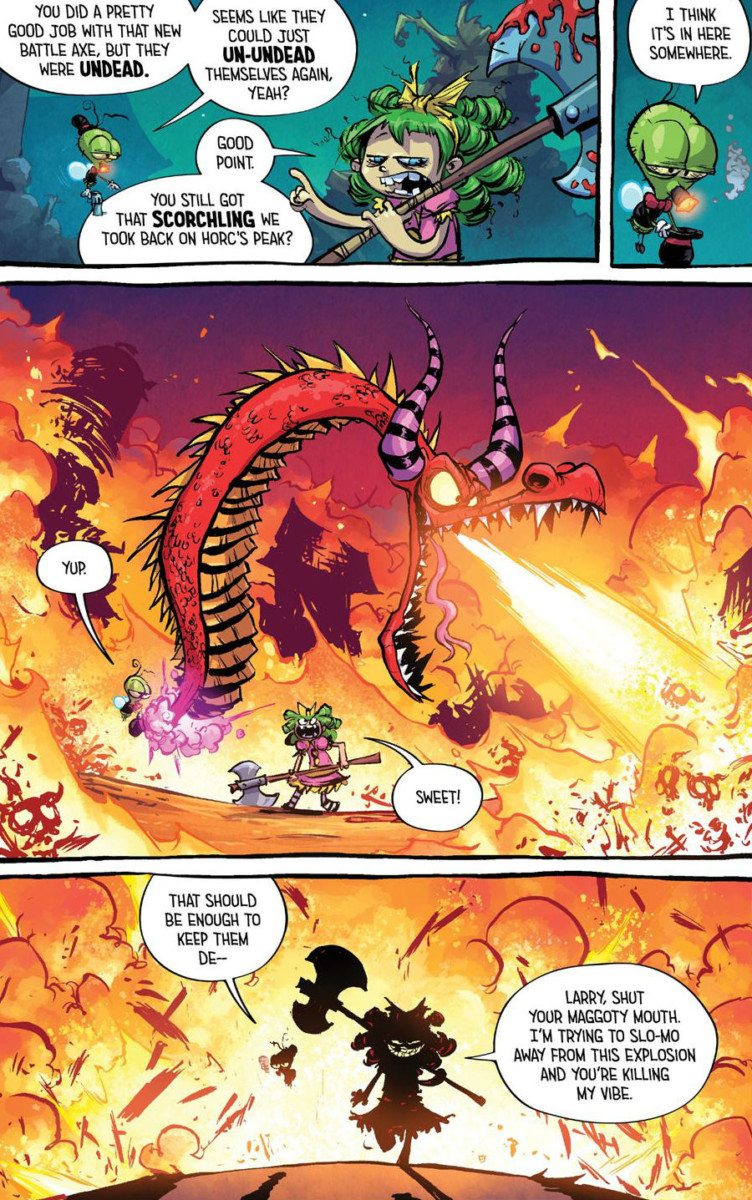 I HATE FAIRYLAND has recently taken the reins over from Young. Gertrude has taken on a life of her own. She is now controlling him as he said in a letter in issue #6. An indie comic is the perfect space for him to interact with this figment of his imagination, and it’s refreshing to see a creator take a risk by letting the character go where they need to.

READ: Eager to catch up? Check out our review of I HATE FAIRYLAND #6!

So why should you read this (besides all the reasons I’ve described)? I HATE FAIRYLAND is fun, pure and simple. You can’t help but smile while reading it. It’s really a difficult feeling to describe, but it’s what makes the book so worthwhile to read. If you’re sick of the same superheroes issue after issue, take a break and let loose with Skottie Young in this book, for fluff’s sake!