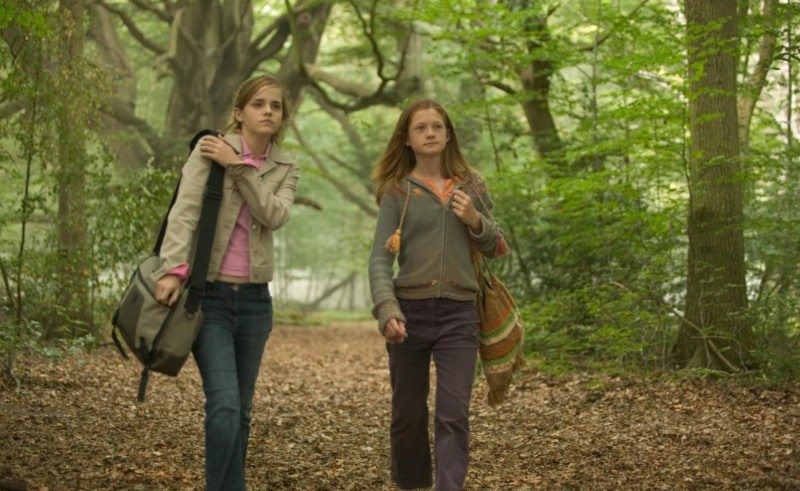 Harry Potter was an integral part of an entire generation’s childhood, but as children we rarely get the opportunity to look at things with a critical eye. With the return of J.K. Rowling’s magical world to both stage and cinemas this year, ComicsVerse will take a look at the Harry Potter series. We will explore the cultural representation of the books, as well as try identify how the books ignited such a massive and dedicated following. To read the entire ComicsVerse Harry Potter Series, check out this tag!

HARRY POTTER has always reminded me of Sundays afternoons during my childhood summers. My brother and I lost ourselves in the neighborhood bookstore, him picking through shelves of books  and little me peeking up at the clerk from behind my mother’s leg, asking quietly, “Is there another Harry book yet?” I grew up listening to my mom read THE SORCERER’S STONE and THE CHAMBER OF SECRETS aloud after dinner, my whole family piled onto our living room couch. HARRY POTTER carried me through my first crush on a boy, my first encounter with grief, my first time playing Quidditch, and my first…well it wasn’t very helpful the first time I fell in love with a girl.

The HARRY POTTER series is a great many things, but diverse is not necessarily one of them. A scan through the books reveals very few POC (debatably only Dean Thomas) in the cast of recurring characters. Differences in religion don’t occur and mental health is discussed only through the lens of Luna Lovegood, dubbed “Looney” by her peers. When it comes to LGBT representation, however, the water gets more muddied.

The straightforward question is: Are there any obvious LGBT characters in Hogwarts or the Wizarding World? Answer: No, but—and here’s the tricky part— there might be characters Harry didn’t describe as LGBT, but still fit under that umbrella? According to J.K. Rowling, the answer is yes.

CLICK: How does race fit into the Wizarding World? Find out by reading about The Goblet of Asian Stereotypes.

Throughout the series, the tale is told through the perspective of an adolescent Harry in the midst of a fair amount of drama and anguish. Thusly, it is heavily debatable how much of his peers’ or professors’ lives he’s in tune with. Who cares about snogging couples in the hallways when Voldemort basically just rose from the dead?

Whenever fans questioned J.K. Rowling about the presence of diverse characters, she swept in time and time again to disprove hints that her books might be lacking in any way. From her infamous reveal of Dumbledore as gay to her tweet about Jewish student Anthony Goldstein, Rowling has fallen into the habit of shunting in a character to fit all fan needs. To be perfectly honest, it’s hard to argue with anything she says. Technically it’s her series and, as readers, we can’t look into her head and see how she originally pictured her characters. We only have the text as a guide.

As Rowling implied in one of her tweets, people are people. Since it’s usually quite difficult to tell at a glance if someone isn’t part of the heterosexual cisgender population, we only have her word in post-DEATHLY HALLOWS tweets and interviews. With her stream of new HARRY POTTER content, you’d think she’d have covered all her bases when it came to diversity yet, there is one place she’s fallen obviously short: lesbian representation.

READ: Want to know more about how LGBT diversity in HARRY POTTER? Check out our analysis on the importance of visibility for gay characters.

I want you to take a minute and try to think of one gay or bisexual female Harry Potter character. Got one? No? Okay, how about one female character who could be gay. How about now? Yeah, me neither.

The difference between saying Hermione is bisexual or Dumbledore is gay comes in the basis of the story surrounding them. Dumbledore has his complex relationship with Grindelwald, a friendship so deep and full of affection one can almost picture a young Albus staring at the other boy from the corner of his eye, the lightest of blushes on his cheeks. Even the favorite LGBT fan couple, Dean Thomas and Seamus Finnegan, are paired together as a result of the depth of their friendship—shown through both the books and the closeness of the actors during the movie. If close knit friendship can leave implications of homosexuality in the masculine world, it’s circumvented in terms of women.

The closest female friendship readers are shown is the one existing between Hermione and Ginny. In THE GOBLET OF FIRE, Ginny knew who Hermione’s date was before anyone else, they slept in the same room at The Burrow, and they’re often shown knowing little details about the other, like Hermione knowing that Ginny is dating Michael Corner before Ron does. Slowly, in the background of Harry’s focus, we see how the friendship between them blooms and solidifies. Why am I, then, not arguing that Hermione and Ginny are completely gay for each other? Well, unfortunately for those of you who ship the two girls together, instead of leaving Hermione’s preferences ambiguously open to interpretation (as Dumbledore’s relationship with Grindlewald was) JKR left them ambiguously shut.

I want you to cast your mind back to the Quidditch World Cup. Remember the Veelas, who danced so beautifully that Harry and Ron both were poised to fling themselves onto the field to impress the dancing women. Hermione, holding onto their shirts to keep them from plummeting to an embarrassing death, was completely unaffected. Why? Veela are a race of semi-human magical creature who are “magically seductive to almost all male beings.” The catchy words here are “almost all” and “male.” Only men are supposedly affected, and men who escape their spell can thusly be inferred as gay. In JKR’s world Dumbledore wouldn’t even blink an eye if a Veela draped herself across his desk in a see-through dress. JKR allowed gay men to escape the feminine, implied sexual, influence of Veelas. So why didn’t she write in a loophole which allowed gay or bisexual women, like straight men, to be affected by the Veela’s wiles? Well, it seems, lesbians didn’t really factor into Rowling’s image of the Wizarding World.

Where a loophole is left to allow for a gay man or two, it’s shut in the face of sapphic affection. Was this intentional? Probably not. There’s a very good chance that, in the midst of hundreds of pages of plot building and her focus on exposing racism through the treatment of Muggleborns and Houselves, J.K Rowling never even realized where she herself failed to represent entire groups of people (the irony, it astounds me). Regardless of intentions, JKR has unfortunately shut the canon door closed on the presence of lesbians in HARRY POTTER, unless she goes out of her way to retcon or explain away the effect of Veelas. In her rush to label a character as gay and check off that LGBT diversity box, she continued to completely shut out a whole group.

CLICK: Want to know more about witches? Take a look at our article on feminism and magic!

Even if Hermione isn’t stated as straight in the series, the difference between her blushes around former beau Viktor Krum and her indifference towards the Veelas is almost blinding. There marks the fall of the Hermione and Ginny ship in terms of canon. But wait! That’s what fan fiction is for—correcting places where canon screwed up. There must be a huge pool of lesbian fan fiction right?

Archive of Our Own (AO3), a website that hosts thousands of fanworks, is currently the only site which has the option for users to employ a search filter to narrow down the the selection of fics shown under a certain tag in terms of pairings. Using this filter system, I was able to reduce the selections presented to ones which only contained f/f pairings. Out of 101,981 stories under the HARRY POTTER tag, 4,945 remained. That’s 4.85% for those of you without a calculator. Well, what about m/m pairings then? If there are so few lesbian pairings on AO3 then gay pairings should totally be affected in the same way? Nope. Surprisingly, there are 49,447 m/m fics archived—48.5%.

You read that right. When comparing the two numbers, there are, mathematically, almost 10 times more fanfics with a gay male pairing. As for the why, there are a number of different theories. Female relationships not being the original focus of most fanfiction sites, the lack of interesting female characters, and rampant misogyny in fandom are the top excuses for this deficiency. While AO3 was originally a site created to archive m/m pairings, considering that the site has heavily expanded in the recent years to archive pairings of all genders and sexualities, the stated 4.85% f/f pairings (of which many of those fics had either a heterosexual or m/m pairing as the primary pairing) is way too low for it to be the only factor. I don’t think anyone would argue that Hermione or Ginny were uninteresting characters. So, my money’s on fandom misogyny—internalized or not.

DISCOVER: Want to know more about fan fiction? Take a look at our article on fan works centered in HARRY POTTER!

Although the majority of fan fiction authors are women, these authors tend to write a large percentage of m/m fiction instead of focusing on female driven romances. The “why” comes down to the sexism rampant in media and literature. Male driven stories are generally considered “more interesting” than those speared by the so-called “fairer sex” and scenes with female pleasure are considered to be more taboo than graphic rape scenes. In many cases, women are the background image or prop stick for their male counterparts and rarely converse with each other about something other than a man (thus heralding the origin of the Bechdel test). In this culture, it’s therefore not hard to understand why women, so exposed to this kind of storytelling, have a hard time writing a story with multiple strong female characters making romantic decisions based on their own emotional and sexual desires.

What does all this mean in terms of HARRY POTTER? Lack of representation of lesbian, or even bisexual, women in fiction and media is a problem that transcends just J.K. Rowling’s unfortunate mistake. Whether it comes from simple negligence or a lack of comfort at writing  a strong female character (let alone two!), when authors or directors think diversity they immediately shunt one gay man or POC in, as if that person can represent the whole of minority experience.

LGBT means more than just “gay white men and the one trans person I came up with because I just saw Laverne Cox being interviewed and she was so cool.” Just as women in general need to be better represented in media, so do all lesbians and female members of the LGBT community. We are queer, we are here, and we are important. Deal with it.