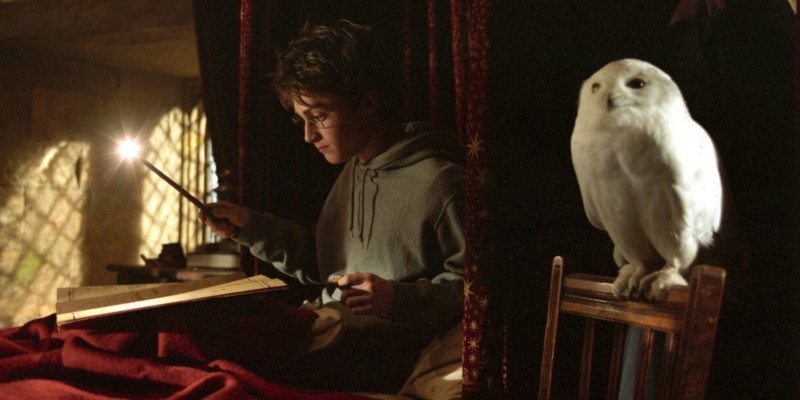 Harry Potter was an integral part of an entire generation’s childhood, but as children, we rarely get the opportunity to look at things with a critical eye. With the return of J.K. Rowling’s magical world to both stage and cinemas this year, ComicsVerse will take a look at the Harry Potter series. We will explore the cultural representation of the books, as well as try to identify how the books ignited such a massive and dedicated following. To read the entire ComicsVerse Harry Potter Series, check out this tag!

Disclaimer: I don’t own any of these characters. I’m just a humble, broke, writer trying to make her way in the world. Please don’t sue. Besides, if I owned these characters, do you think I would be writing when I could be in the Bahamas with one of those drinks with the little umbrellas in it?

Does any of that sound familiar? Maybe add a few typos and some fandom-specific inside jokes and you’d have what passed for protection from copyright law back in the early days of the internet.

READ: Interested in how The Hero’s Journey and Puberty can be related? Click here to read HARRY POTTER and the Prisoner of Puberty!

In 2004, shortly before the HARRY POTTER AND THE PRISONER OF AZKABAN movie premiere, JK Rowling went on record saying that she was “flattered by the fact there is such great interest in her Harry Potter series and that people take the time to write their own stories.” Meaning, Rowling effectively gave her blessing for fans to continue writing fanfiction and for more fans to start. HARRY POTTER was already a global phenomenon at this point. Adding the internet and an official blessing from the author to the original hype, it’s no surprise fan community took off.

This news was earth-shattering. Prior to this, many authors actively condemned fanfiction and sent “cease and desist” letters to fanfiction authors. Anne Rice, author of INTERVIEW WITH A VAMPIRE, wrote on her website, “It upsets me terribly to even think about fan fiction with my characters,” and that she “does not allow” fanfiction to be written. Orson Scott Card, author of the ENDER’S GAME series, spent years saying that “the time to write fan fiction is ‘never.’” Both writers have since made amendments to their stances, but their belief that fanfiction was a blight was not uncommon.

Not that author disapproval stopped people from writing or creating other works based on their favorite characters. In the case of HARRY POTTER, MuggleNet, one of the biggest and most popular fan-created sites, was founded in 1999. Not to mention all of the fanfiction hosted on FanFiction.net and on other sites. To date, there are over half a million HARRY POTTER fanfics hosted on FanFiction.net and over 80,000 stories on HarryPotterFanfiction.com, which was founded in 2001.

READ: Is Cho Chang problematic in the way she represents Asian culture? Find out here!

Rowling set the tone for a new era of author/fan interaction and even fan/fan interaction. Entire online communities were created around HARRY POTTER and thrived. Without fear of retribution or lawsuit (unless you really crossed a line), fans were able create and share their own stories. And this is where it becomes especially pertinent; fans could and did create culturally diverse stories set in the HARRY POTTER universe.

One of the biggest failings of the HARRY POTTER series, as you are well aware if you’ve been reading the other articles in this series, is that it is not a culturally or racially diverse universe, at least not explicitly so. Rowling offers little to no representation in the original books and the movies fare little better. Token characters are often stand-ins for entire cultures and entire groups of people are completely ignored in favor of more of the same type of character/person.

But that is not the case in fanfiction. You want to explore your headcanons about how wizarding in other regions works? Do it! You want to question the sexual identities of your faves? Go for it. You want to get deep with the classism issues at Hogwarts? Go wild. You want to be a 17-year-old goth vampire girl who hates preps more than anything? Well, that’s been done, and probably cannot be replicated in the same way as the original MY IMMORTAL.

And why would you want to do the same thing again? The HARRY POTTER communities that first rallied around fanfiction have morphed into these massive communities who express themselves beyond fanfiction. There are wizard-themed bands that tour the country, sometimes the world, playing songs about HARRY POTTER. Quidditch is played across the globe, notably on hundreds of college campuses across America. A VERY POTTER MUSICAL, an originally scored HARRY POTTER musical, started as a low-budget student production that went viral, prompting several sequels and launching Darren Criss’ career.

DISCOVER: Fanfic Can’t Fix What It Won’t Acknowledge! Find out more in HARRY POTTER and the Deathly Lack of Lesbian Representation!

So much has been created since Rowling threw open the gates to her universe and let everyone come in and play. The art that is made when there’s no fear of retribution from the author is art that can be taken and used to grow. Art made within a supportive fan community can become a starting point for change in the canon. Take, for example, the upcoming production, THE CURSED CHILD, which stars a black Hermione Granger, something fans have been headcanoning for years. What’s even better is that Rowling herself publicly remarked that “Hermione can be a black woman with my absolute blessing and enthusiasm.” While that doesn’t make up for seven books of diversity through omission, it’s certainly a step in the right direction.

JK Rowling is not a perfect writer. She does not make worlds that are entirely representative or characters that show the vast and varied makeup of her audience. However, she did change the tides of how authors interact with their fans and what the fans create. Rowling became a paragon of openness with her stories, a trend that many writers since have followed.

Stephenie Meyer, author of the TWILIGHT series, held a contest to showcase young, aspiring female directors’ work, telling them to create a re-imagining of a TWILIGHT character. When announcing the winners, Meyer wrote, “Though it’s always daunting to put your characters in the hands of someone new (and over the years I’ve had a lot of experience), seeing The Spear Sister’s beautiful and creative vision come to life was a wonderful experience!” Say what you will about Meyer’s writing, but the way she interacts and encourages her fans is admirable.

DISCOVER: Does representation through omission count? Find out in HARRY POTTER and the Chamber of Queerbaiting!

Of course for every Andy Weir (author of THE MARTIAN), or Neil Gaiman (author of THE SANDMAN), there will be a George R.R. Martin who is against fanfiction, writing on his own blog that, “No one gets to abuse the people of Westeros but me.” Fanfiction will always be a point of contention, but that will never stop it from happening, even without the author’s consent (just Google “GAME OF THRONES fanfic” and you’ll see). Fans will always want to fix what they think is wrong with a story. It could be some as simple as two characters hooking up or fixing a plot point. But, it could also be something more complex like representing their own culture in a positive way.

The wizarding world of HARRY POTTER may not be a perfect place, or an accurately represented place, or a culturally diverse place, but when Rowling invited the world in, she gave us the opportunity to fix it ourselves in a way that authors before her hadn’t.

All is not well, but we are working towards it.