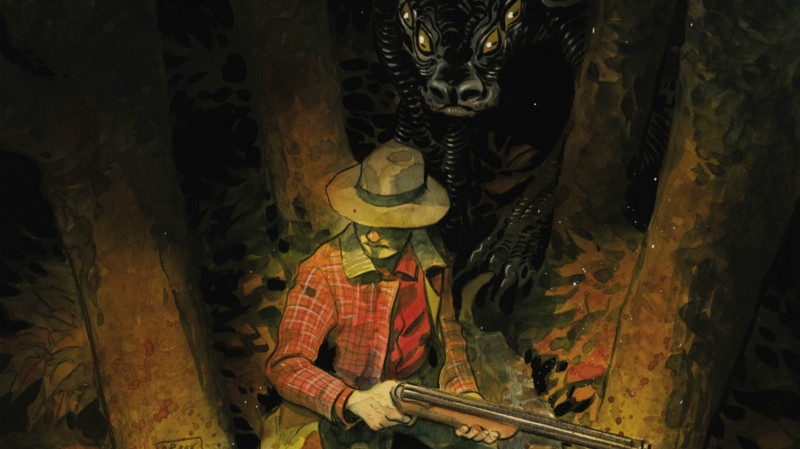 HARROW COUNTY was the very first horror comic I picked up. Before, horror had never appealed to me in any medium. Now, I can proudly say I’m an avid follower of the genre. This comic washed away all the stereotypes I had about horror tropes before reading this (useless female characters, no plot, etc.). While it’s certainly eerie and might not be something to read before bed, it’s also beautiful. Besides the breath-taking art and the intriguing story, we get to follow Emmy as she grows and discovers her past. Following up the last sixteen issues, HARROW COUNTY Vol. 5 delves deeper into previous characters. It furthers a beautiful, spellbinding story of identity and loyalty all the while keeping you up at night.

Emmy was born from the same tree where an evil witch named Hester was hung. Because of the terribleness that Hester brought, the residents of Harrow County are wary of witches and magic. So, when Emmy turns eighteen and begins to show signs of supernatural abilities, the town threatens to kill her. By demonstrating that she holds none of Hester’s evil intentions and that the county still needs her, Emmy convinces them to let her stay. Since then, she’s destroyed, befriended, and outsmarted various haints and other creatures.

READ: Interested in other high-quality horror comics? Check out our review of REGRESSION #1!

In HARROW COUNTY #16, Emmy successfully defeated the family of witches that had threatened to destroy Harrow County. At the end, there was an impressive display of her abilities when she banished all of them at once. There’s no doubt that Emmy’s power is far beyond what we’ve seen before. As she continues to develop into a more nuanced figure, the history of her power comes more and more into focus. Emmy is a beacon of hope for female characters in comics. She’s a woman full of her own strength, inspiration, and goodwill. Relying on no one but herself, she remains one of the most powerful people in this realm. 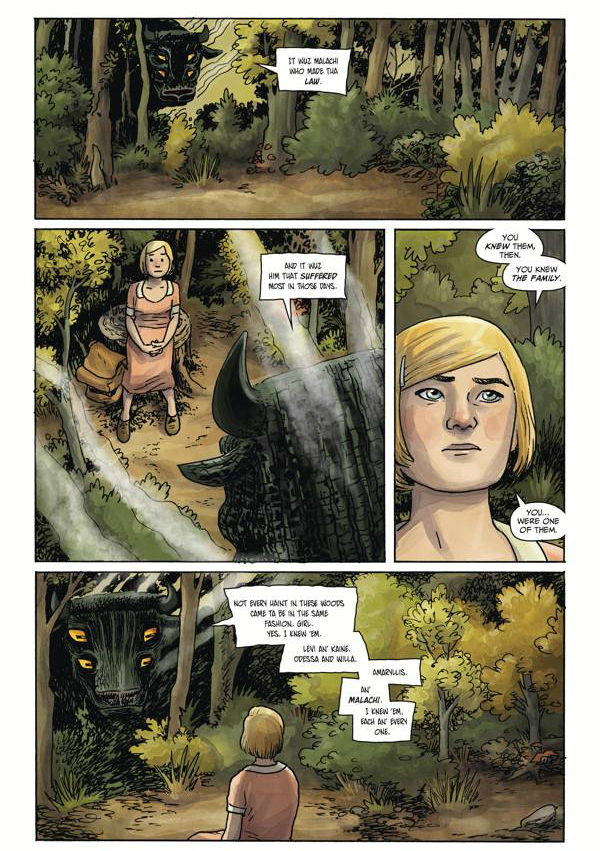 In this volume, we see the return of previous characters and an addition of some new ones. Without giving too much away, this little world is growing less and less detached from its surroundings. Once a small country area, Harrow County is now the focus point for a lot of supernatural happenings. Meaning that the stakes are higher than ever as this volume progresses. Various outsiders have set their sights on Harrow for many reasons, and it all falls on Emmy to protect them. She is the only thing that stands between the people of Harrow County and obliteration, as we’ve seen time and time again.

READ: Interested in more of Cullen Bunn’s work? Check out our review of X-MEN BLUE #1!

The first half of HARROW COUNTY Vol. 5 is somewhat different from the second. A guest artist, Carla Speed McNeil, takes over these two issues while Tyler Crook illustrates the rest. The images in this article show McNeil’s style and depiction of the characters, which may or may not be your cup of tea. While McNeil’s art is decent, Crook really makes HARROW COUNTY a stand-out work. He uses traditional watercolor to give Harrow County and its people that Southern Gothic aesthetic. His use of color, light, and shadow makes the monsters and horrors of this world jump off the page. Crook also shows his amazing, elaborate drawing process at the end of the collection. 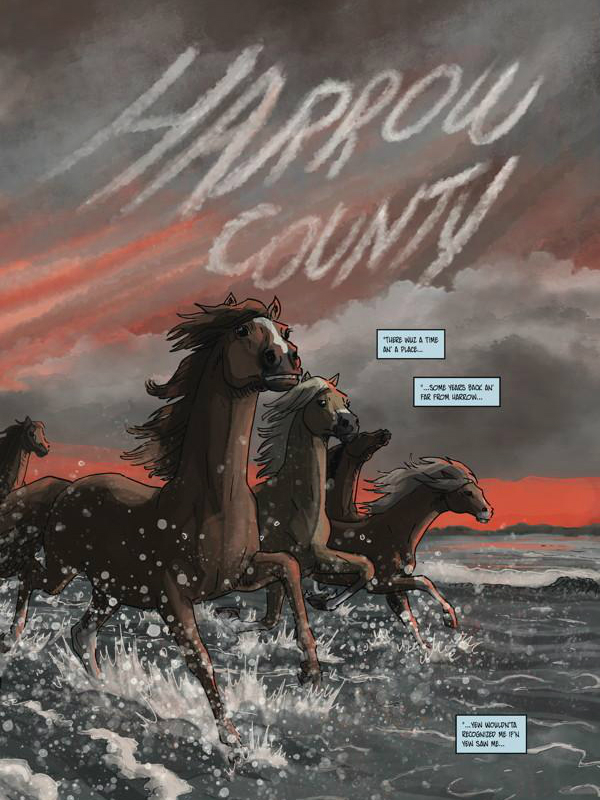 Seasoned horror writer Cullen Bunn effortlessly weaves in the plot with the superficial horror elements we’ve come to expect from HARROW. There is a minotaur-like monster who dwells in the forests of Harrow County named the Abandoned. Though he’s interacted with Emmy many times, he seems to be more important than he let on. Now, we finally discover what makes him so integral. While issues #17 and #18 focus on the Abandoned’s backstory, #19 and #20 explore a group of hunters determined to take him down. The overarching story moves forward as the monster recounts its history. Malachi and Amaryllis take center stage as the ever-expanding past of Emmy and her “family” reveals itself more and more. In particular, HARROW COUNTY Vol. 5 takes us through the history of the Abandoned. But more strikingly, it shows us what happens when you cross its path.

These issues give answers to our questions and have us hungry for more. If anything, HARROW COUNTY Vol. 5 proves that Bunn, Crook, and their team are incapable of disappointing us. They deliver quality, consistent writing, and atmospheric artwork. I would recommend this series to anyone, even those with a bias against horror comics. It won’t just change your mind — it’ll stay in your thoughts for days to come.