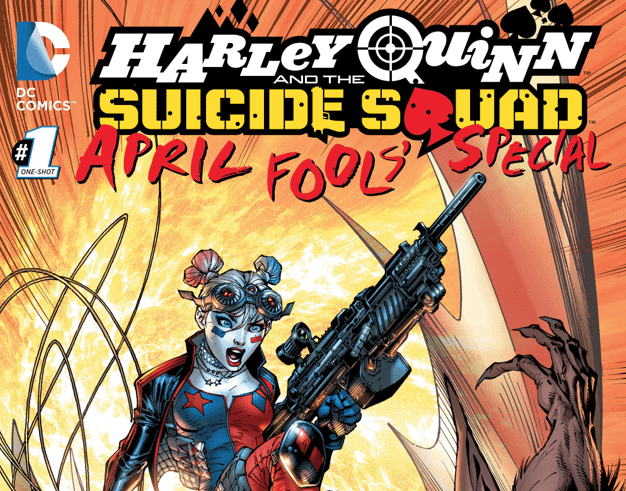 With her upcoming film debut in August’s SUICIDE SQUAD, as well as news that the character is considered the “fourth pillar” of DC Comics (after Batman, Superman, and Wonder Woman), Harley Quinn looks to continue her streak as one of DC’s most unexpectedly popular characters. Who better to feature in an April Fools’ Day one-shot than the lovable prankster-psychopath, Harley Quinn? From her humble beginnings on BATMAN: THE ANIMATED SERIES as a love-struck victim and accomplice to Batman’s greatest foe, the Joker, Harley Quinn has become well-rounded and incredibly interesting, and this one-shot showcases the character as such. 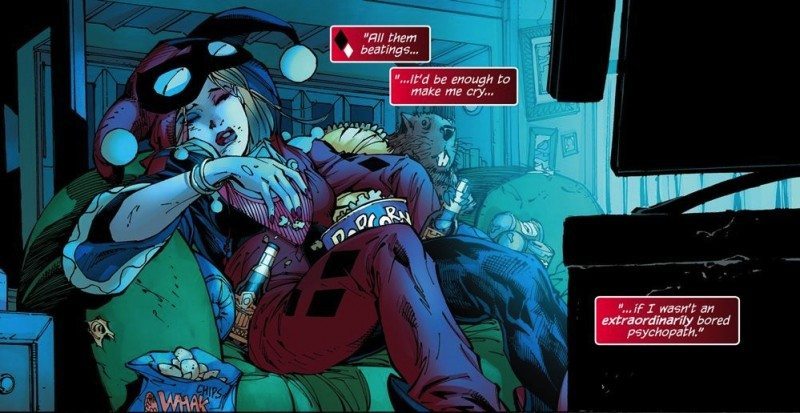 Considering the somewhat sordid history of the character—including a questionable contest for fans and artists—any and all interpretations of Harley Quinn have to be closely inspected. With this April Fools’ themed one-shot, I think writer Rob Williams and artists Jim Lee and Sean Galloway did a great job of capturing what makes her so interesting.

On the one hand, we have the fun-loving, silly kook of a super-villain that we’ve come to know and love: Harley Quinn. On the other, we have to remember that, like many supervillains and heroes alike, she has a secret identity of sorts. For Harley, it’s Dr. Harleen Quinzel, a psychiatrist who could have done great things for Arkham Asylum if she hadn’t met the Joker. Like many great villains, Harley rides the line between insane and misunderstood, allowing many opportunities for enticing characterization.

READ: Love GOTHAM GIRLS? Check out our review of POISON IVY: CYCLE OF LIFE AND DEATH!

Not only do we start with Harley addressing her own “subtextual, subconscious voice,” similar to Marvel’s Deadpool breaking the fourth wall, we also have her experiencing a loss of direction and identity after cutting herself loose from the Joker. In other words, while her new life in Coney Island is great, she’s bored.

Harley Quinn’s character definitely ran the risk of being unable to stand alone without the powerful force that is the Joker. That being said, Harley Quinn’s sensitive personality and violent and silly hijinks reminiscent of Happy Tree Friends, actually proves she’s a much more compelling character on her own. Instead of being the character to which she was an accessory, the Joker serves as something in her past that she wishes to break free from. She wants to dance to the beat of her own drum. The mental instability and violence aside, she serves as a hyperbolic cartoon role model.

In this one-shot, as well as in her own series, Harley makes it very clear that everyone should be comfortable and loving with their own identities. Intrinsically, the part of Harley that was a doctor, the part that wanted to help, is still very much a part of her. With the introduction of a file regarding an “alcoholics anonymous for bad guys” from a mystery person, Harley becomes determined to act as a doctor for supervillains. This leads to her returning to Gotham City, where Man-Bat is on the run after his escape. In proper Harley Quinn fashion, she tries to “help,” and due to her own psychotic, almost naive, mind, she does so by helping Man-Bat “stop being a bat” (which involves possibly killing him). 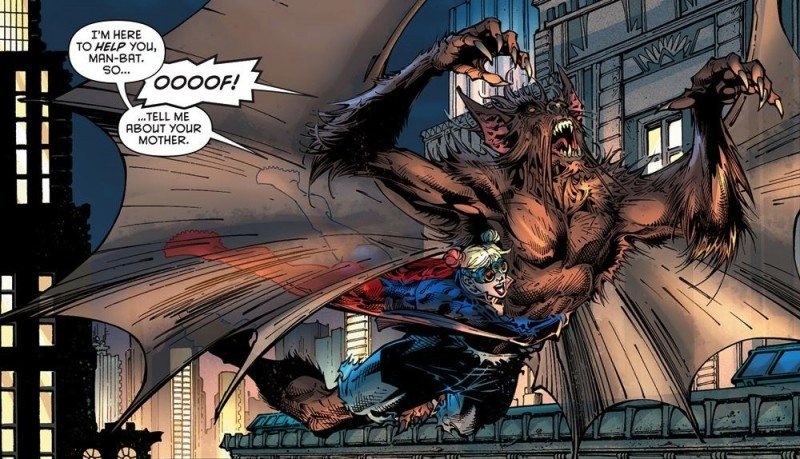 LISTEN: Watch or read THE WALKING DEAD? Listen to what we have to say about it!

Eventually, with the assistance of Sean Galloway’s bubbly and adorable cartoon art, we see Harley come to the aid of a number of great supervillains with her Evil Anonymous sessions before she finally hits another road block: She gets bored. Again. 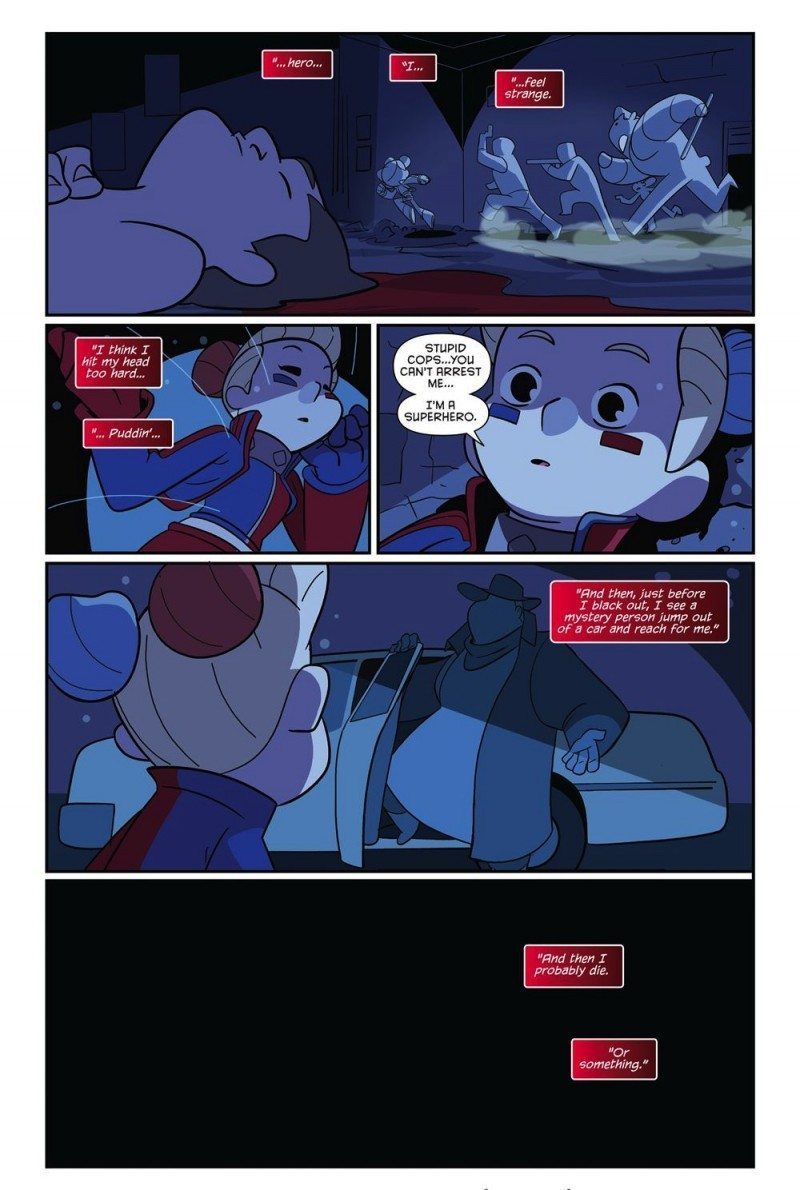 Because of this, she gets ahold of Scarecrow’s fear gas and unleashes it upon her peers-turned-patients-turned-rivals in super-villainy. Due to her feelings of solidarity—and, well, just because she wants to—she also breathes in the fear gas, and what she sees next is unexpected.

“Topsy-turvy” comes to mind when thinking of ways to describe this one-shot. Appropriate to the character, this story is like a carnival ride in its overall fun factor, as well as its gut-turning ups and downs. I would be lying if I said that this was just a fun story. In fact, Sean Galloway’s art appearing after that of notable artist, Jim Lee, is both a pleasant surprise and something contextually relevant to the story. The use of two different art styles and the silly aspects of Harley Quinn’s story give way to a darker story.Knowing myself, I often don’t get on board with stories that are just fun for fun’s sake. With Harley, there’s not only

Knowing myself, I often don’t get on board with stories that are just fun for fun’s sake. With Harley, there’s not only an “anything goes” kind of attitude in storytelling approach and content, but there also is a seminal darkness that is integral to DC narratives. Having always been a Batman fan myself, it’s always good to see an old character remain strong and unique.

Harley Quinn’s current permutation in this one-shot, as well as in her ongoing series, shows not only the likable fun of her character, but also the depth. She’s not just a crazy, fun psychopath borne out of the Joker’s machinations. She’s her own three-dimensional character with fears, passions, and motivations.  Everything that Harley Quinn is about—mental health, identity, acceptance, and sometimes just having fun—is beautifully cohesive in Rob Williams’ story. What else could you ask for?