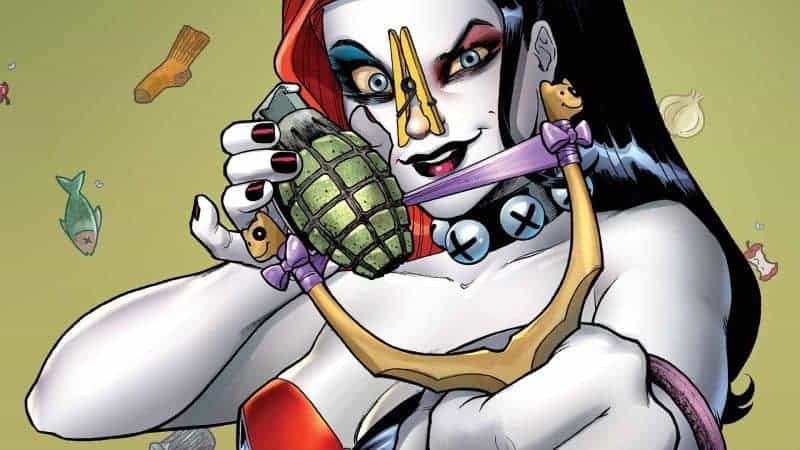 The scents range from pleasant banana lotion to disgusting pizza burps… with a little marijuana thrown in there for the more open-minded reader. Before you ask, no, the smell will NOT get you high. Not that anyone was wondering…

Wondering about earlier issues of Harley Quinn? Check out our reviews!

Scent aside, the story and art is simply entertaining. Harley, of course, has her own very unique sense of humor. It’s spread throughout, in that obnoxious and childlike style that has become typical of Harley Quinn.

The larger-than-usual annual issue follows Harley on a quest to free her former lover and best friend, Poison Ivy, who has been hypnotized by the two current heads of Arkham Asylum. Part of this mega-issue is a hallucination, which we see from the perspective of four different characters, Harley and Ivy being two of them. This hallucination sequence is really the highlight of the issue for me, “rub and sniff’ notwithstanding. Each hallucination is presented with a completely different art style, and the overall meta quality of the hallucinations makes it really enjoyable.

Want to dig deeper into the dreamworlds?  Check out our posts on Comic Theory!

The finale of the issue introduces us to a new character, but refuses to explain his origin. Though our four main characters take some guesses, the character stops their guessing game and skips over his own origin story. This is actually a pretty cool tactic, as it plays with the whole “Oh, look at me! I’m a villain! Let me explain everything you need to know about me and my scheme” trope, and turns it on its head.

Overall, this issue was very entertaining. The art isn’t beautiful, but it’s no eyesore. It has a very cartoony quality, and, to be honest, the artist knows the audience. There’s enough eye-candy for those who are looking for it. Honestly, that’s my biggest issue with Harley Quinn as a title. The character, who was introduced as a submissive childlike sidekick to Joker has evolved into an ubersexualized clown vixen. This is an avenue which more or less began with Arkham Asylum’s slutty nurse costume, but it hasn’t really changed. It’s always been uncomfortable to me, personally, as the most sexual her source material (Batman: The Animated Series) ever allowed her to get was a throw away reference to Joker wanting to ride his Harley. To each his own, but this treatment of the character isn’t mine personally.

For more of our opinions, check out our blog posts!

How do you feel about Harley Quinn?  Has she matured a little too much or just the right amount?

Hear from her creators in our interviews!