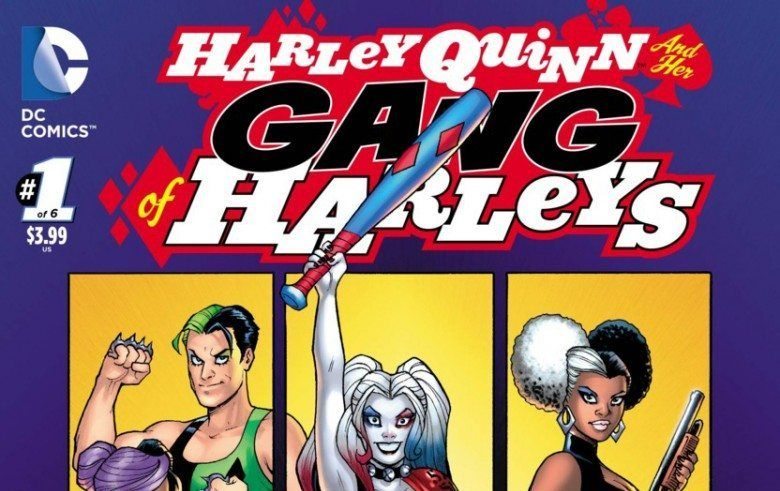 What do you get when you give Harley Quinn a diverse gang made up of people from all over New York? You get a smorgasbord of colorful characters with a great sense of humor. HARLEY QUINN AND HER GANG OF HARLEY’S follows, well, Harley Quinn and her gang of Harley’s. Taking place in Coney Island, N.Y., no longer beneath the thumb of the Joker, Harley turns over a new leaf by trying to do some good in the world with her gang. Can they really make a difference in New York? Find out in the first issue of this brand new series, HARLEY QUINN AND HER GANG OF HARLEY’S #1!

READ: Go back to where it began with Palmiotti’s HARLEY QUINN #1!

This isn’t the first time we’ve seen Harley and her gang. In her previous comic book titled HARLEY QUINN, readers were given a chance to see who Harley really was without the Joker always pulling her strings. Surprisingly, she’s like Marvel’s Deadpool. She can be cocky, raunchy, funny and sometimes doesn’t always do things the way your average superhero would, but what matters is that she’s trying to make a difference and is, in fact, doing so. It may not be the best or right way, but it sure is a way, at least for Harley that is.

As a first time reader of a Harley Quinn comic, I was impressed. The writers do a great job of explaining who everyone in the gang is, as well as identifying their traits, characteristics and what led them to join Harley in the first place. Jimmy Palmiotti, the former writer on the HARLEY QUINN series, returns to write yet another funny and compelling story. Palmiotti is also recognized for writing many JONAH HEX stories as well as a few of the characters POWER GIRL and SUPERMAN & SUPERGIRL. New to the Harley Quinn series is writer Frank Tieri. Tieri has worked on a few of the WEAPON X books as well as some WOLVERINE stories. From what I’ve gathered, Palmiotti writes more stories focused toward people with a sense of humor, whereas Tieri writes the ones for people looking for more of an action/adventure storyline. Together, these writers have come up with a great first issue that demonstrates both of their writing styles in a way that can only be described as a jack-in-the-box with a punching glove, or funny and action packed. 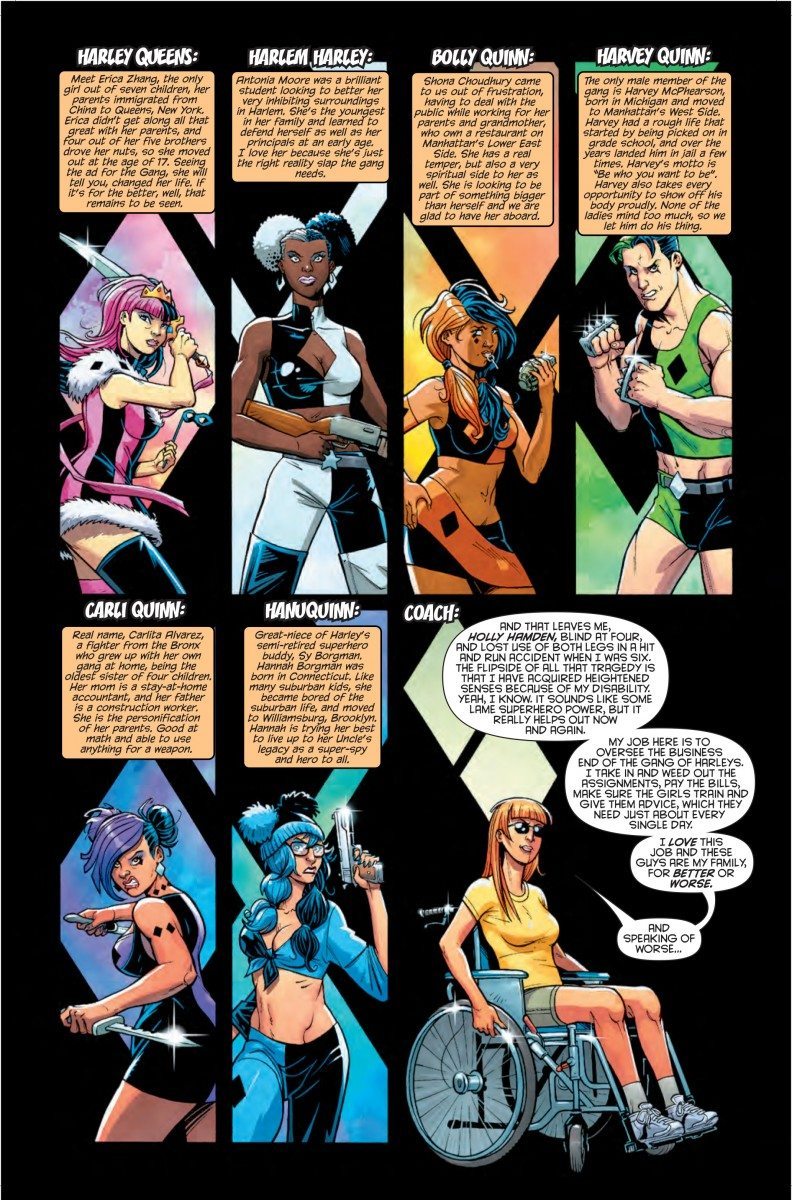 As I mentioned, Harley’s team is made up of some very interesting people from all over New York. But hey, who from New York isn’t interesting, right? I won’t tell you about all of them (otherwise I’d be ruining the joy of reading this marvelous comic), but I will mention a few that stuck out to me. Holly Hamden (Coach) is the brains of the Harleys. When you look at her, she doesn’t look like she’d belong to the gang. Here’s the catch, though, at a very young age she lost her eyesight and about a few years later was hit by a car losing the use of her legs. So what’s so unique about her you ask? She’s the one of the most rational members. Like glue, she’s able to hold everyone together.

Next is Harvey McPhearson (Harvey Quinn). Though he may be the only male member of the group, that’s not what separates him from the rest. It’s his motto, “be who you want to be.” Despite his outer appearance, Harvey is a man who doesn’t let other’s opinions affect him. Finally, the last person I’ll mention, and my favorite Harley, is Antonia Moore (Harlem Harley). Antonia is a total bad ass. You’ll find out from reading this comic that she doesn’t take you know what from anyone. She’s as smart as she is tough. At a young age, she had her own principals that she followed and tried to make Harlem a better place. Being someone who’s smart, tough and wants to make her city a better place, puts Antonia at the top of my list.

This book isn’t artist Alain Mauricet’s first rodeo. Mauricet has provided the penciling and inking to HARLEY QUINN, HARLEY’S LITTLE BLACK BOOK and ROBIN WAR. Mauricet’s style is clean and tight. He leaves just the right amount of detail on his characters as well as the little things such as showing the perfect amount of light/shadow on a character depending on how they are angled. Colorist Hi-Fi, known for providing color to countless comics such as STARFIRE, SUPERMAN, and BIRDS OF PREY, uses all the colors of the rainbow to show just how colorful Harley and her gang is. Hi-Fi’s use of colors brightens up all of the shenanigans that the gang ensues while maintaining a calm and smooth setting. 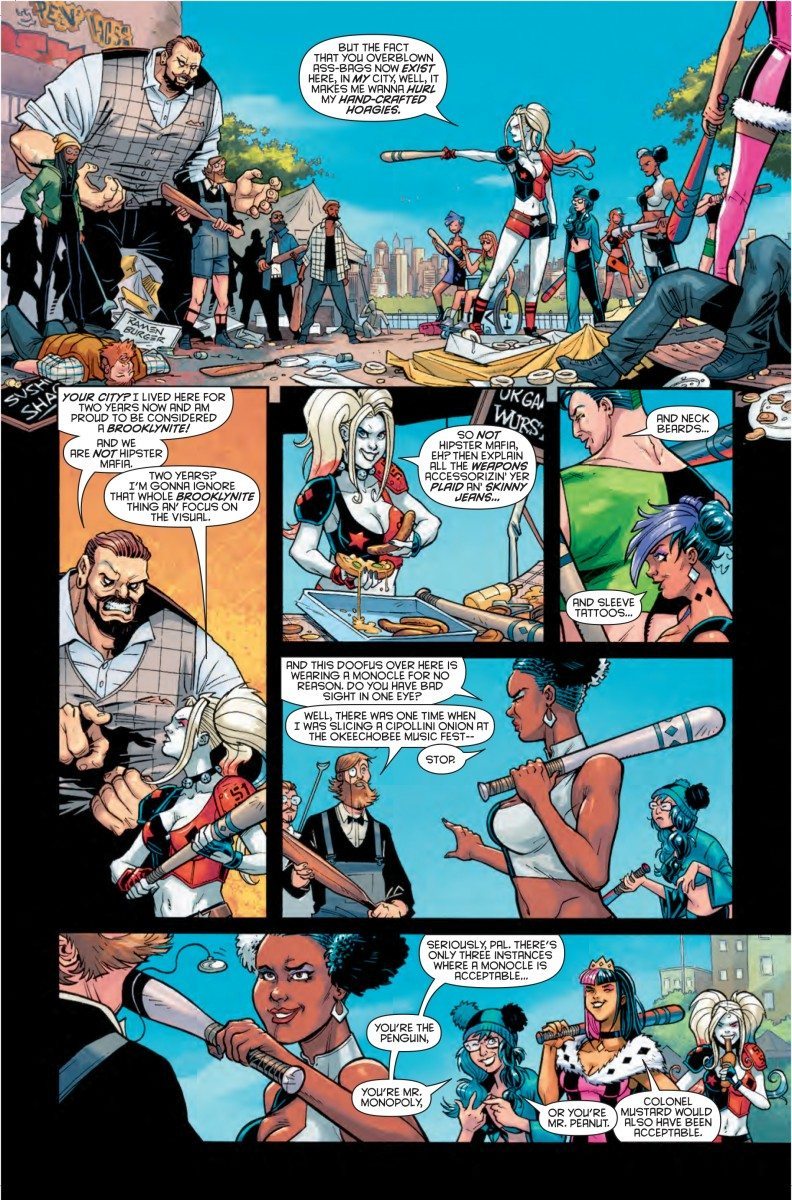 Stepping aside from how great the art and the story are, let me tell you what goes on in this issue. Harley and her gang have been cleaning up the streets of New York for a while now. Seeing how much Harley’s gang has grown, she starts to wonder how they would fair if something were ever to happen to her. So, she comes up a plan that puts her gang to the test. Will they be able to prove themselves capable without the guide of their leader?