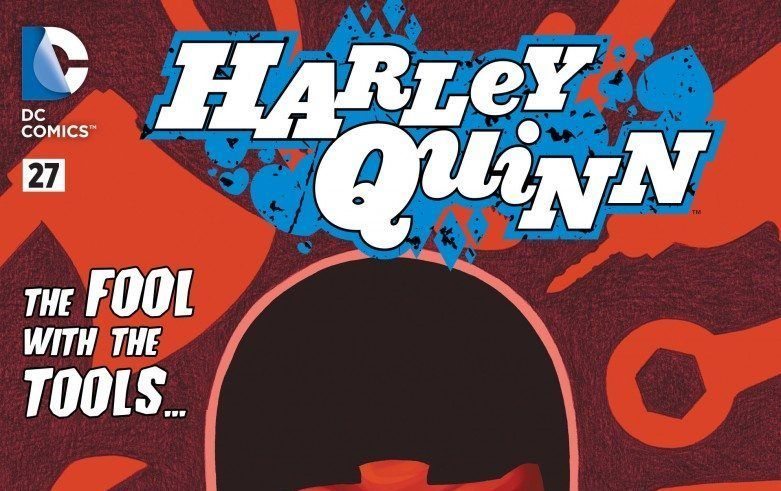 You wouldn’t think it is possible to frame multiple public murders in a comedic light, but leave it to a book about Harley Quinn to do it. For those of you unaware, that’s how HARLEY QUINN functions. Amanda Conner and Jimmy Palmiotti want you to indulge in your inner sinner for a bit and enjoy inhabiting Harley Quinn’s world. That’s the idea driving the book, and HARLEY QUINN #27 is no different. This month, Harley confronts her stalker/admirer Red Tool (which sounds an awful lot like a certain Marvel mercenary’s name, wink wink), and we get a little bit closer to understanding why he is so enamored with our favorite harlequin of hate in the first place. It’s light, funny, and well-paced. For all of these reasons and more, it makes a great issue both as a standalone and as a continuation of the bigger story.

What makes this book really tick, though, is that it feels distinctly its own. You couldn’t simply swap in other characters and have the same story. This is a Harley Quinn type of story through and through. There’s a certain zaniness to the humor that is endearing in its own way, even if it manifests in audience members getting axed, literally as well as figuratively. You can’t help but crack a wry little smile and chuckle a bit as some of the humor plays out.

It isn’t all perfect, and some of the one-liners fall a little flat, but that’s Harley Quinn’s schtick. She’s downright obnoxious and a hefty amount of her jokes are bad puns, but there’s a certain magnetism to Harley that Conner and Palmiotti seem to understand as a core part of the character. Harley doesn’t indulge in the gore going on around her, but responds to it with her own brand of humor. She doesn’t laugh at the gore itself, but more at the slapstick quality of its happening. It’s a subtle distinction from the Joker, but an important one in separating her from him, especially in her own book. 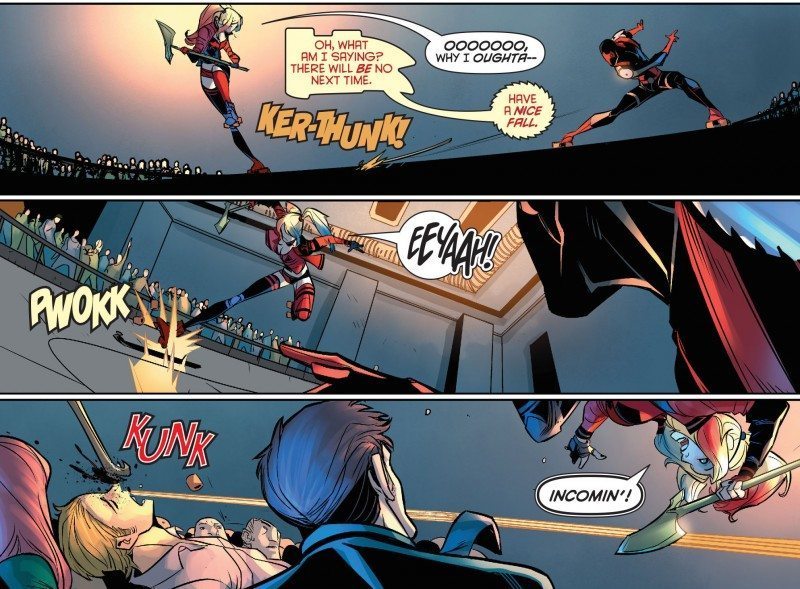 Important also is the inclusion of a foe that Harley can play off of. In a way, Harley Quinn’s character is like any sketch comedian who’s only as good as her stage partner and that’s what Red Tool provides. He’s a pretty weird dude (spending two months to animate an origin story for himself to play for Harley), but not so weird that he upstages Harley. He’s more normal than she is and that allows a great natural tension to be built. It is a big part of the fun and yields some of the best parts of HARLEY QUINN #27. It’s a difficult tightrope to balance, but Conner and Palmiotti do it adeptly.

Thankfully, the art is up to the task of meeting the buoyancy of the story. It’s sharp, expressive, and delivers on bringing much of the humor in the script to light. Conner and Palmiotti are lucky to have John Timms aboard since it is clear that he understands the wack-a-doodle aesthetic that a book about Harley Quinn demands. In particular, when someone is slain through with a sword, you don’t even bat an eyelash and just appreciate it as a stroke of dark comedy. Timms understands that one mis-framing of a panel could completely change how a joke lands and that it requires his remarkable control of artistic tone to pull it off. Thankfully, on this front he seems to excel. 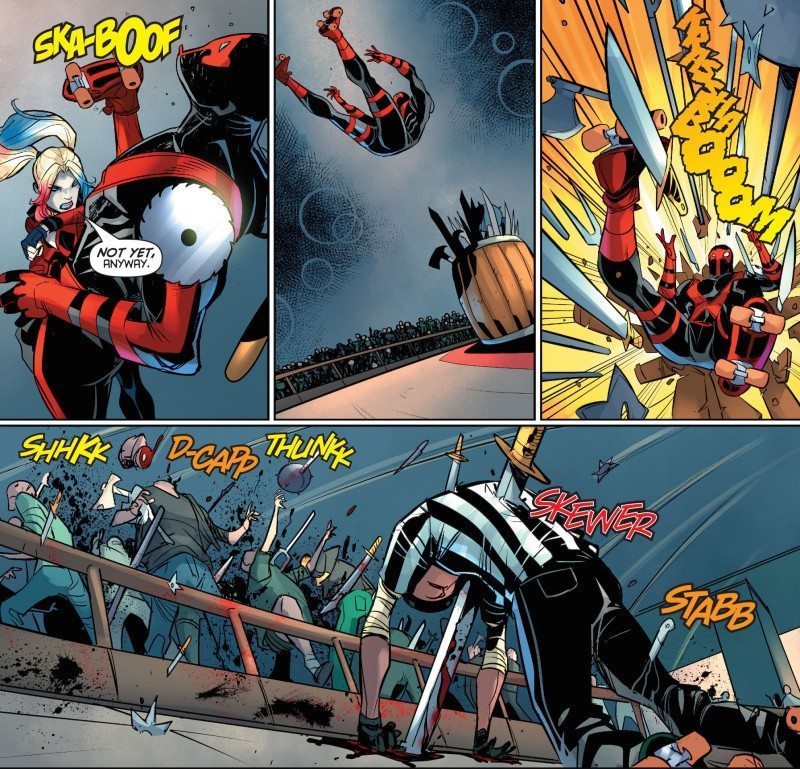 More than many other books, when you read HARLEY QUINN, you know that this is exactly what it needs to be for the character at its center. This is not a side-Batman or Joker story. This is all Harley, and thankfully DC has corralled a strongly inventive team that understands how to make it all work, when it could be just another smut book of corsets and sex puns.