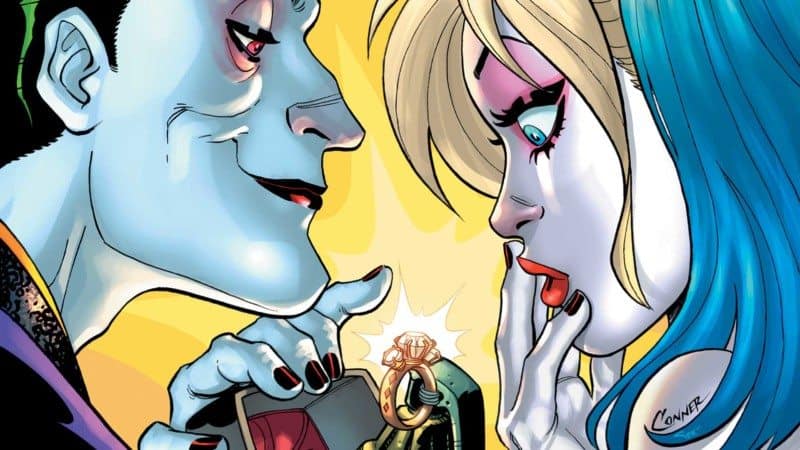 In the “Joker Loves Harley” arc, the Joker seems to be a changed man who wants to reconcile with his ex-lover, Harley Quinn. Harley, a woman of her words, fulfills her promise to finish off the Joker if she ever hears from him post-breakup. Or at least, we think she does. SPOILER ALERT. In HARLEY QUINN #13, writers Jimmy Palmiotti and Amanda Conner surprise readers with a plot twist: the Joker is actually a poser!

READ: Find out what we think about the case for Barbara Kean as Harley Quinn here!

HARLEY QUINN #13 opens with the Joker and Harley getting married, having four daughters, and growing old together. At least, that’s the life an unconscious Joker dreams of as he lays beaten-up by a group of Brooklyn hipsters. He wakes up mumbling, “I love you,” as Harley gets ready to cut his skin with a sharp knife. She then reveals, that after taking his clothes off, she knows that he isn’t the real Joker, but instead another man pretending to be him. After a torturous interrogation, the man finally reveals that he is Edwin, a former patient and an admirer of the Harly Quinn. With help from the Joker, he was able to escape from the facility he was in and transform himself into the Clown Prince of Crime. 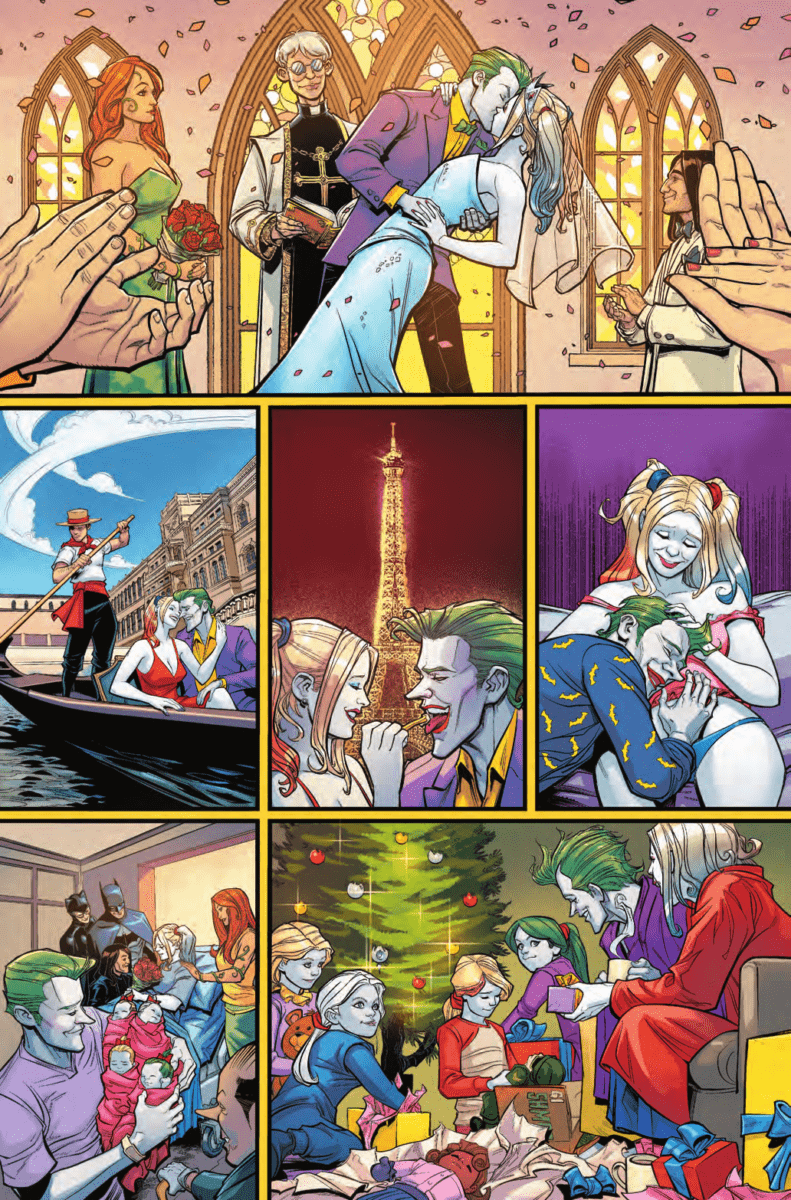 Knowing the Joker too well, it was obvious that there were hidden intentions when he was trying to rekindle his relationship with Harley, but helping someone pretend to be the Joker and play with Harley’s mind? That’s a whole new level of manipulation. The Joker went as far as sending information about himself and paying for Edwin’s surgery so that anyone would be fooled into thinking he was the real deal. Well done Mistah J, you fooled us all.

READ: Take a look at what we hope to see in the Harley Quinn Spinoff here!

Edwin is yet another man in Harley’s long list of unrequited admirers, but the lengths he went to win Harley’s heart is ludicrous. He didn’t even consider why the Joker was willing to help a complete stranger, and assuming that Harley would never find out shows how delusional his infatuation has made him. While Harley does feel guilty for not visiting Edwin as she had promised earlier, what crosses the limit for her is the fact that Edwin teamed up with the man who was her physically and emotionally abusive partner. Embittered by Edwin and Joker’s manipulation, Harley tormented Edwin until she finally shot him. 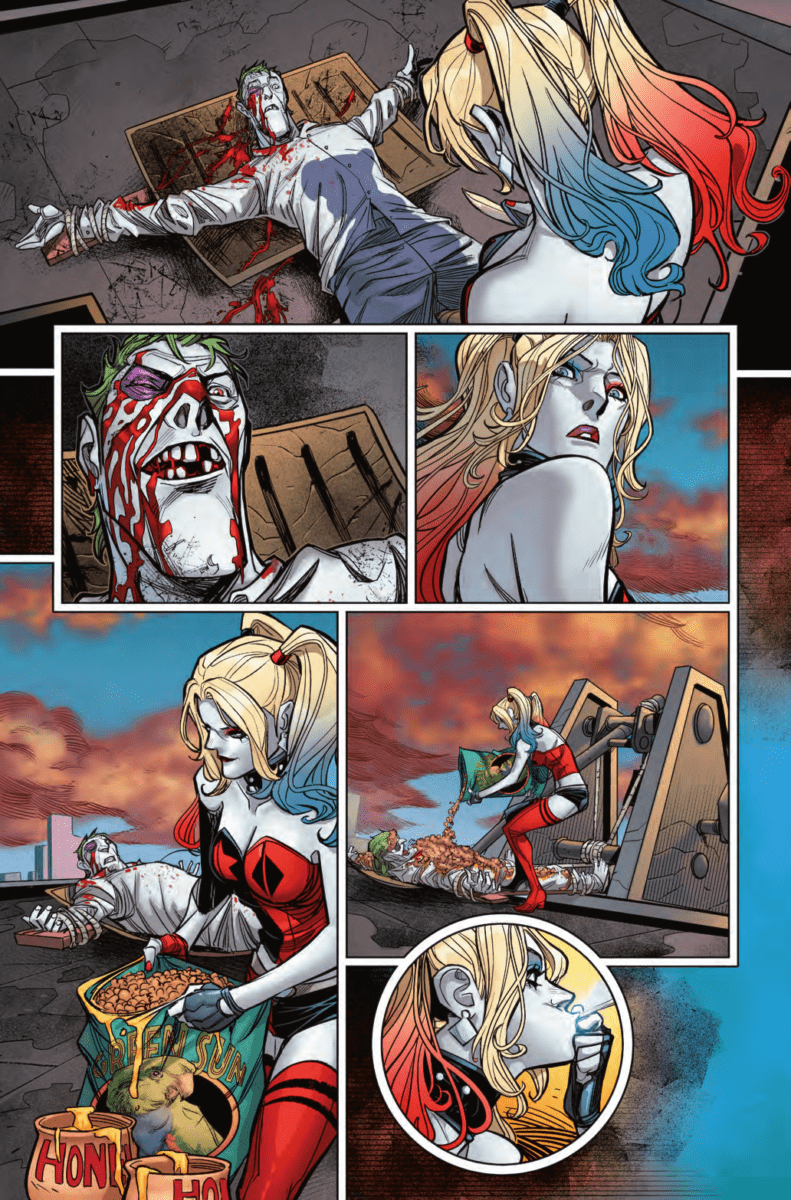 I was starting to empathize with Harley after all that she went through with the Joker and then facing rejection from Poison Ivy, but now I think Harley’s been a total jerk to her admirers. In the previous installment, she vowed to not speak to Red Tool for 30 days because he tried to protect her from the Joker, and in HARLEY QUINN #13 she kills a man who was madly in love with her. Although I do understand why she was so upset, Edwin was simply a naive lover who was brainwashed by the manipulative Joker. Then again, she is a supervillain and she doesn’t have to do the right thing. If I’m supposed to hate the protagonist, I’d say Palmiotti and Conner are doing a great job.

READ: Curious about the origins of this insane Clown Princess? Read more about the evolution of Harley Quinn here!

HARLEY QUINN #13 is an installment containing extreme brutality, and artist John Timms did a spectacular job in portraying that. Ed’s vicious torture is well drawn; with thick, red blood splattered all over his body as he screams in pain. The Hi-Fi colors of Alex Sinclair cement the morbid and frightening nature of this issue. In a sequence where Ed tells Harley and her friends how he once dressed up as the Joker and set a building on fire, the dark and grim Gotham city is illuminated with the scorching flames, looking alluring yet menacing at the same time. 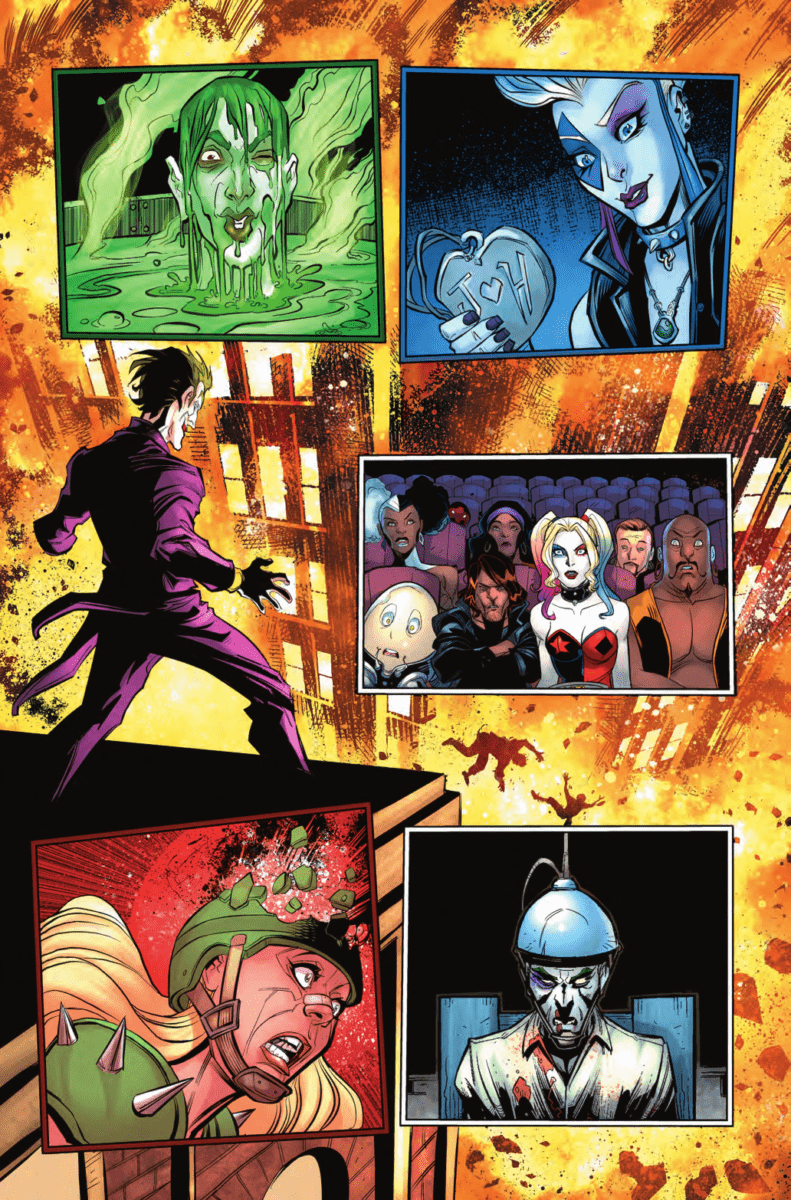 Another sequence worth mentioning is when Harley shoots Ed. The dark mesh of purple and black in the background accentuates the blinding light that radiates from the muzzle of the gun. Harley looks frighteningly unapologetic as she pulls the trigger, indicating no remorse for her actions. The lettering of Dave Sharpe helps to highlight the sound effects of the action sequences, providing a dramatic effect to the whole comic.

Overall, I absolutely enjoyed reading HARLEY QUINN #13. It’s a violent, action-packed installment with a major truth bomb. I knew all long that the Joker was playing with Harley, but I certainly didn’t see this coming. I’m eagerly looking forward to seeing what the Clown Princess does in the upcoming installment because, as Big Tony says, she is anything but predictable.