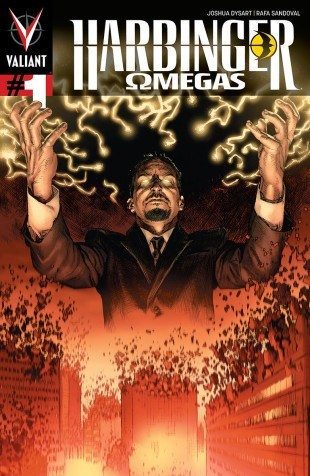 This issue reintroduces Toyo Harda and Peter Stanchek, showing their motivations and their struggles. Harda, the most arrogant villian of the Valiant Universe, effortlessly thwarts international resistance and commands a new world order, seeking to end global conflict. He is strong and calculated…not to mention cocky. His legion of psiots were nameless, further emphasizing his power with an expandable army. The world will need help dealing with him.

Peter is back to taking (stolen) drugs to numb his head from reading the thoughts of others. I am thankful last month’s Harbinger 25 reintroduced Joe, his friend who died in the beginning of the series. Joe and Flamingo “return” for a very memorable, and twistedly sympathetic, scene. Peter is in a dark place right now, and I fear it will get darker for him as he becomes more vulnerable and detached.

As I said in Harbinger’s Armor Hunter tie-in: big events are great, but it is fun to also see how they react away from the action, to see the consequences. Kris, Peter’s once love interest, now a fugitive, is living the consequences. Her house is condemned and under surveillance and she has gained a big following of people who sympathize for the Renegade “heroes”. While the cast is split up all over the world, the anticipation is building for their eventual return.

The biggest strength of this issue is the multiple perspectives and viewpoints. You really do get caught up with the Renegades and Harda and how the world perceives them. Kris, Peter, and Harda all get spotlights, with the other important characters still present in the issue. This miniseries will be a great introduction to the Harbinger World and promises to propel us down a new path for the whole Valiant Universe!

Some of the Harda’s powers were a bit distracting, but liberties have to be taken when displaying fictional powersets. Peter’s scenes and drug illusions were very well done, an iconic tsue moved the series up to top priority reading for me and I can barely wait the month to see what happens.