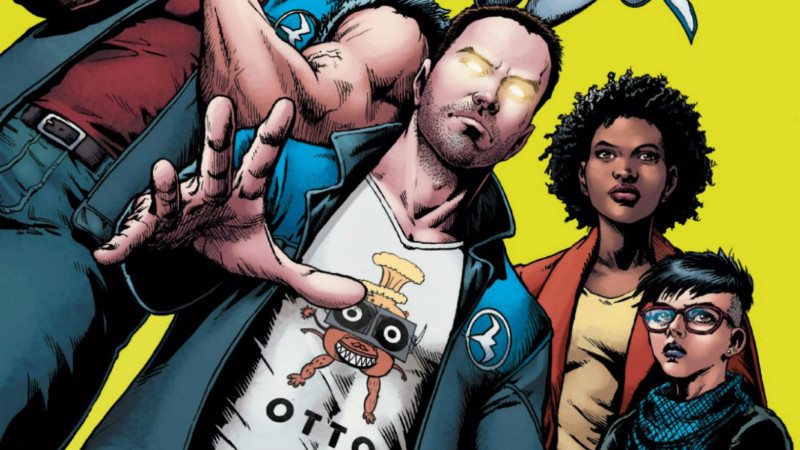 Valiant’s most popular superhero team — the Renegades — are back in HARBINGER RENEGADE #1! Writer Rafer Roberts and artist Darick Robertson take us back into the dark, psiotic world of HARBINGER. In this return, Roberts gives us a look at how the world has changed after the Renegades ended Toyo Harada’s evil plan. 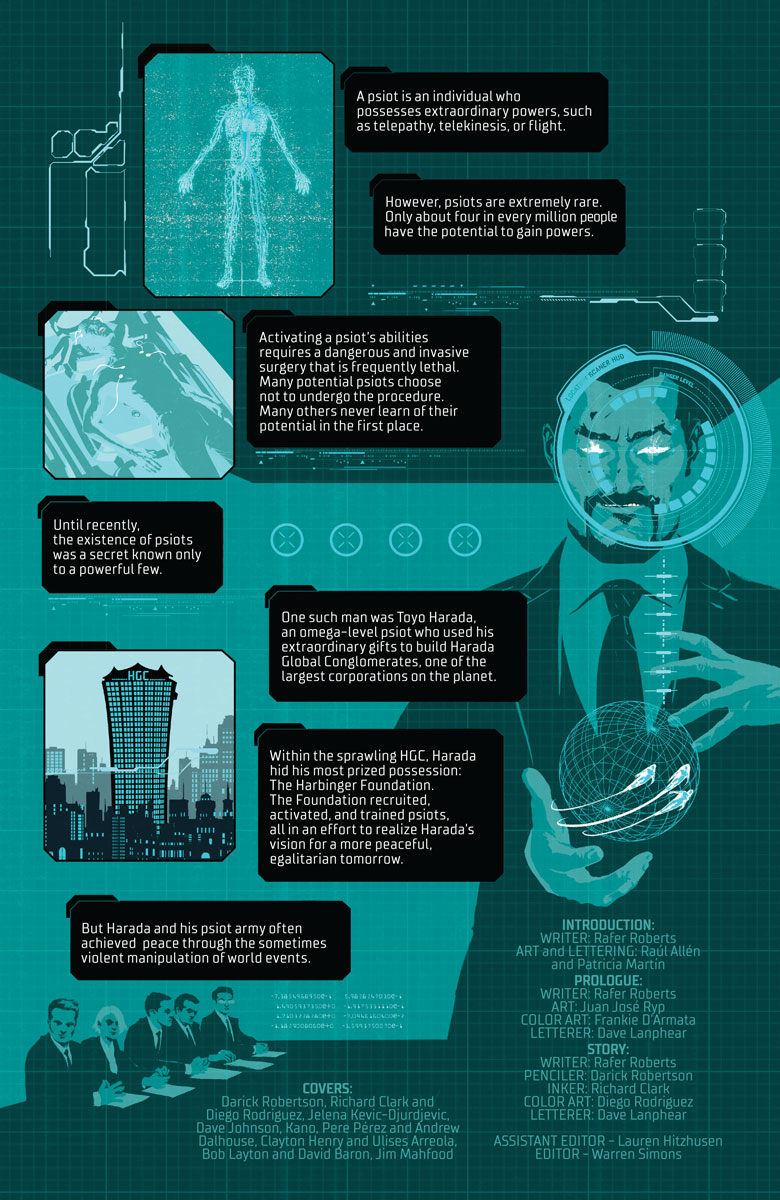 Roberts summarizes the plot of HARBINGER very well in the beginning of this new story arc with a few introductory pages to help new readers catch up. Things have changed for the heroes and it’s mainly because of their actions. By releasing information on how psiots can activate their abilities, they’ve sparked a pattern of deaths that cannot be ignored. Now people are able to activate their abilities freely, but risk their lives by doing so.

The issue starts with a prologue where Toyo Harada has a team sent to deal with an enemy of his. The implication here is that there is a bigger player in town now, one who has even more power than Harada.

READ: Want to learn more about writer Rafer Roberts? Check out our interview with him!

Robert’s writing shows us what it would be like if knowledge of potential super humans was to get out to the public. What would come of the power behind that knowledge? Will someone manipulate those psiots for their own plans or give them the option to use their abilities freely? These are some questions you’ll likely think about when reading HARBINGER RENEGADE #1. 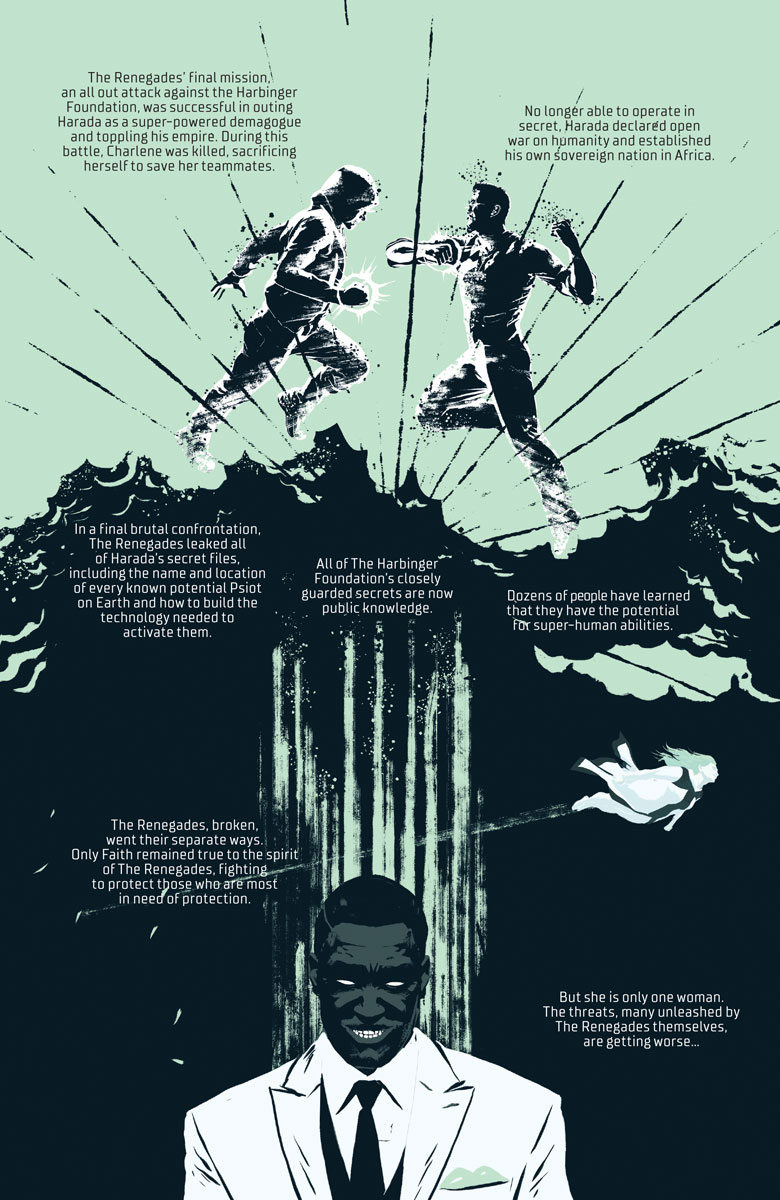 The start of this new story line will bring new creative opportunities. One can hope that Roberts will twist up some of the preexisting ideas about those with powers. Perhaps he may show us new and exciting powers or conflicts that the heroes encounter. With this door open, Roberts can explore how people will trigger their powers and to what extent they’ll go. He can even try to add a cultural, diverse spin to the development of these powers.

This issue throws diverse characters into a story that tackles serious issues such as peer pressure, mental illness, and drug addiction. Faith — the first plus-sized superheroine in comics — makes an appearance as a leading character again. She appears to seek the help of her fellow Renegades to right the wrong they committed, which led to people attempting to activate their powers. Faith isn’t the only diverse character we’re reintroduced to. We also get characters of color like Jay, an African-American boy who has been targeted as a psiot. There’s also Kris, a Renegade who is keeping a low profile due to probation and also happens to be in an interracial lesbian relationship. 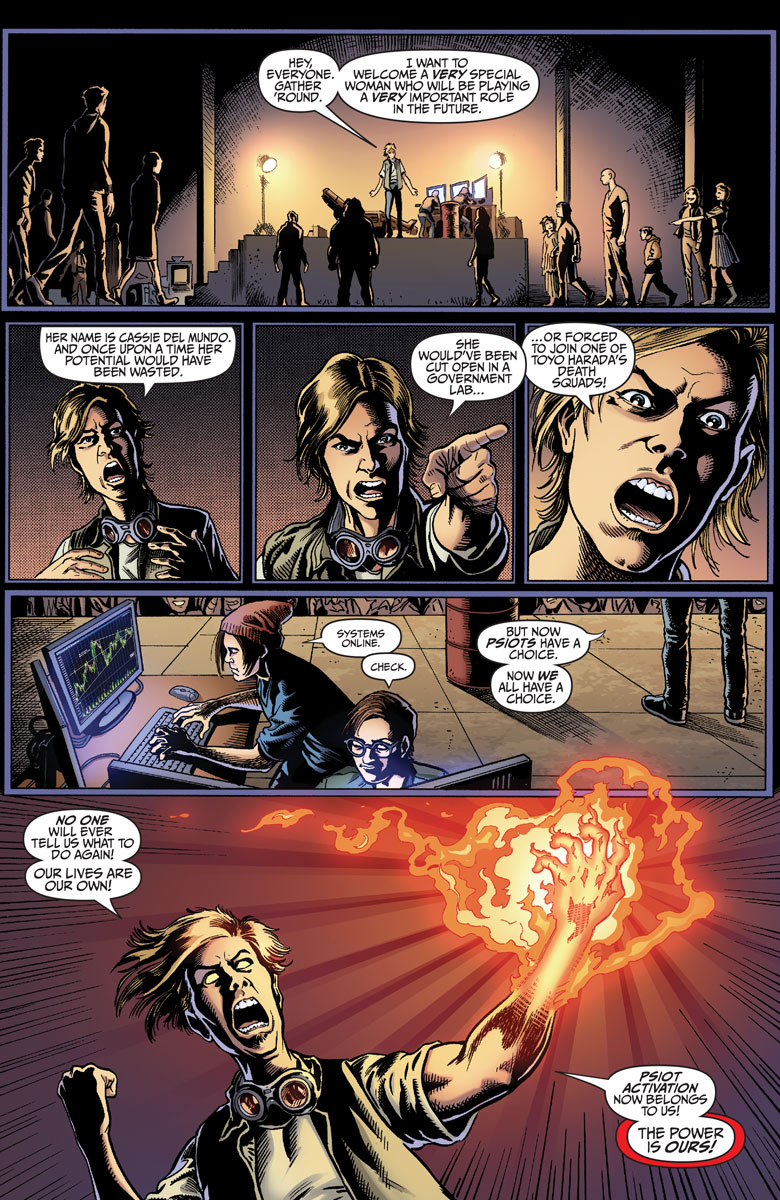 Roberts’ writing doesn’t shove these character into the reader’s faces, but rather it openly introduces them into the plot naturally. Characters like Faith and Kris are diverse and transgress any prejudice boundaries set in comics. They give us hope that characters of different shapes, sizes, colors, and sexual orientations will make a bigger presence. That’s exactly what Roberts and Robertson do with HARBINGER RENEGADE #1.

READ: Interested in learning more about Valiant’s character Faith? Read this feminist analysis of her role in comics!

Issue #1 digs deep into the characters’ development. The return of characters like Kris is great because we learn how much her character has changed from the last time she was in the story. She is now a retired heroine who has gotten out of prison and settled down. This story gives us the conflict Kris has from her heroic Renegade side but the side that also wants to meet her parole expectations.

We know that time has passed since their appearances in HARBINGER, but has anything changed? Obviously, there are some notable differences (like Torque’s retirement from being a hero or Ax’s will to keep being one). Though this a good set up, I’d love to see these character’s developed more over time (as I’m sure Roberts will do).

Robertson’s artwork is solid and misleading in the best way possible. You expect it to be tamed visually by just showing characters speak or fly, but then it becomes chaotic. Robertson does this by illustrating visceral, bloody moments that catch you off guard (for example: a panel where a character’s head explodes almost instantly). 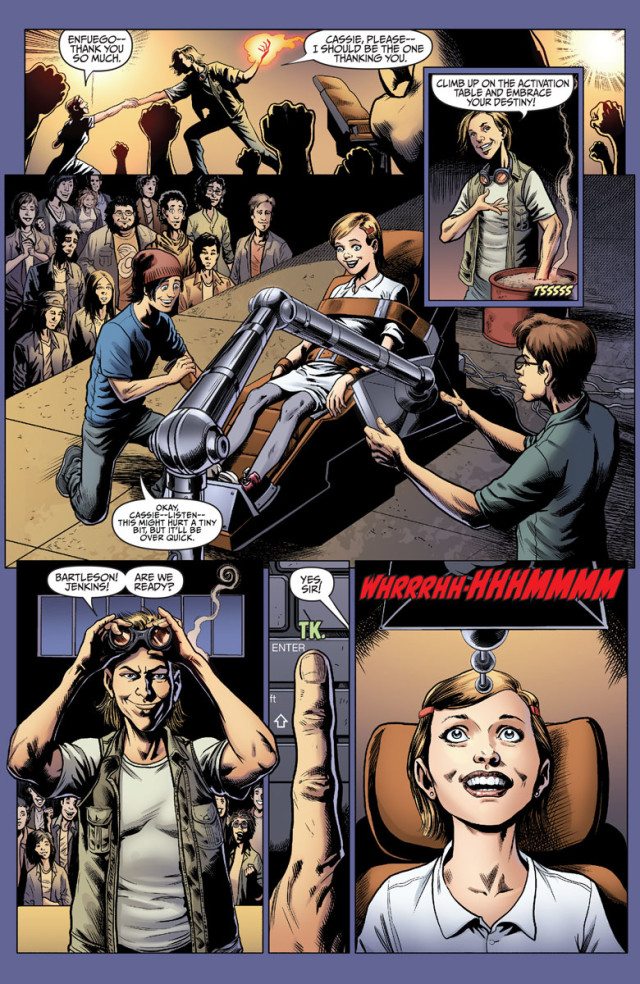 HARBINGER RENEGADE #1 is an awesome start to this new arc. Roberts and Robertson greatly set the tone for this narrative, one that we know is going to push the Renegades to their limits.

I’m eager to learn what happens next for the Renegades because these characters are complex and troubled. Only time will tell how they will be able to handle this new danger in their rapidly changing world.

How will they deal with both Harada and the new threat? What new abilities do you think we’ll see? Comment below with your thoughts!