HANNIBAL is my favorite show of all time. It didn’t achieve this title easily. I like to think that my standards are pretty high. After all, I’ve watched a lot of television. (Some would say too much. But who needs friends when you’ve got cable?) Needless to say, HANNIBAL had some stiff competition. The show went toe-to-toe with the titans of television: THE WIRE, BREAKING BAD, THE SOPRANOS, MAD MEN, GAME OF THRONES, FARGO, MR. ROBOT and the first season of TRUE DETECTIVE. These are some of the greatest stories ever told in the television medium. But HANNIBAL managed to claw its way to the top of my list. And it did so with only 39 episodes.

NBC’s short-lived series featured an amazing cast (with the magnificent Danish actor Mads Mikkelsen in the titular role) performing scripts penned by the incredibly talented Bryan Fuller (PUSHING DAISIES). And it was all wrapped up in a gorgeous visual style with an indie art-house vibe. The show was a critical darling, but a dud in the ratings. Its first season had an average viewership just shy of three million. As the show progressed, this number steadily declined. Following its third (and best) season, NBC opted to cancel HANNIBAL.

Sadly, HANNIBAL never received the attention it deserved. But herein lies the tragic catch-22: Even though the show was criminally underappreciated, it couldn’t cater to a mainstream audience without sacrificing quality. Unlike most shows which struggle to remain relevant, HANNIBAL embraced obscurity. A choice that allowed for more creative freedom while also ensuring the show’s continued existence on the outer fringes of pop-culture. As viewership dwindled, HANNIBAL grew more daring and ambitious, demonstrating that low ratings can actually help improve a show’s quality.

(Warning! Some spoilers ahead. Read at your own risk.)

For the uninitiated, HANNIBAL is based on a popular series of novels written by Thomas Harris: RED DRAGON, SILENCE OF THE LAMBS, HANNIBAL, and HANNIBAL RISING. The books tell the story of Dr. Hannibal Lecter, a highly intelligent serial killer with a hankering for human flesh. Lecter is no stranger to Hollywood, having received the big screen treatment numerous times and with varying levels of success. But the series does something that none of these movies were able to achieve. Unlike most adaptations, NBC’s HANNIBAL manages to improve upon its source material.

READ: Anime to Live-Action: Why Fantasy to Reality Can Be Problematic

Adapting a popular story is a risky endeavor. You don’t want to upset a passionate fan-base, but there is little creativity in telling the exact same story beat for beat (especially if that story has been adapted before). Bryan Fuller was able to strike the perfect balance. HANNIBAL veers away from the source material in some interesting ways, while still remaining a faithful adaptation of Harris’s work. Fuller reinterprets the characters and their dynamics, using these new relationships to inform familiar events and conversations. This adds layers to the narrative, giving viewers a chance to experience this well-known story in a different light.

Let’s start with the big one: Hannibal “The Cannibal” Lecter. In my opinion, Mads Mikkelsen (CASINO ROYALE and DOCTOR STRANGE) delivers the single best portrayal of this character to date (yes, even better than Anthony Hopkins’ Oscar-winning performance). This is not the creepy monster behind bars we saw in SILENCE OF THE LAMBS. Nor is this an origin story similar to the abysmal HANNIBAL RISING. In the show, we first meet Hannibal before his treacherous nature is revealed. By day, he is a well-respected psychiatrist who assists the FBI in profiling serial killers (oh, sweet irony). By night, he is a cold-blooded predator known as “The Chesapeake Ripper.”

Much of the enjoyment comes from watching Hannibal maintain his double life. It’s an enthralling experience seeing him operate in social situations, approaching every scenario with an ulterior motive. He toys with people. He manipulates them. And he does it all out of sheer curiosity. He just wants to see what people will do. For him, humans are nothing more than a source of entertainment (and sometimes sustenance). But there is more to Hannibal than manipulation and murder. He is a layered character. Far more layered than the bulk of cliched serial killers who overpopulate the world of fiction. You know the type: antisocial weirdos living in their dead mother’s basement. As Mads Mikkelsen puts it, “We could put him in a box and call him a psychopath, but I don’t think we can, as we have no idea who this person is or if he is a person.”

READ: Why the GILMORE GIRLS Revival is Starting in Winter and Ending in Fall

Hannibal is cultured, charming, and (to some extent) empathetic. This version of the character is not entirely free of emotions. Throughout the series, we see him express hate and disgust, but he also feels a level of respect for those he deems interesting. He also demonstrates a fondness for life’s many pleasures. He appreciates art, so much so that it can actually move him to tears. He loves creative expression in all its mediums: music, painting, literature, cooking. Even murder is a form of art in his eyes. (As he puts it: “Every creative act has its destructive consequence.”) And, at least in some twisted way, Hannibal is actually capable of “friendship” and even “love” (more on that later). Finally, there’s Hannibal’s “religious” beliefs. Surprisingly, Hannibal does believe in some kind of deity, although it is not rooted in any organized religion. Hannibal has stated: “I have not been bothered by any considerations of deity, other than to recognize how my own modest actions pale beside those of God.” His beliefs are also commented on by another series character, Will Graham:

“Hannibal’s not God. He wouldn’t have any fun being God. Defying God, that’s his idea of a good time. There’s nothing he’d love more than to see this roof collapse mid-Mass, choirs singing. He would just love it, and he thinks God would love it, too.” 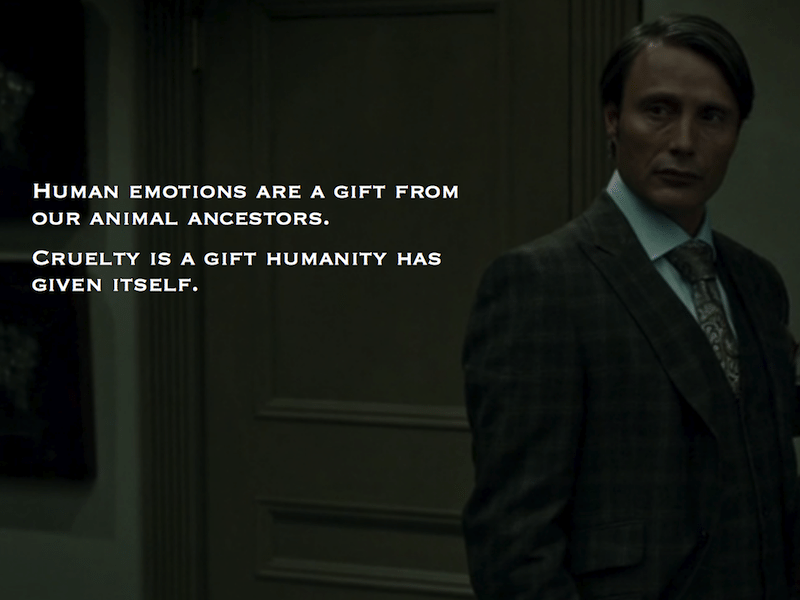 This brings me to the show’s second main protagonist: FBI consultant Will Graham. In the books, Will first consulted with Hannibal in order to profile a serial killer known as “The Minnesota Shrike.” Upon discovering Hannibal’s secret identity, Will brought the doctor to justice. Years later, Will sought the incarcerated killer’s help in tracking down the Red Dragon murderer. Much of this is still present in the show, but the character and his interactions with Hannibal have been completely re-imagined. In HANNIBAL, Will Graham possesses a rare condition which allows him to empathize with any point of view, even the most vicious of serial killers. And this trait is what first peaks Hannibal’s interest. Hannibal believes that Will is a kindred spirit. He is the only person who is truly capable of understanding him. Hannibal considers Will to be his friend, and, as much as Will hates to admit it, the feeling is mutual. The duo possesses a strange sort of friendship… and maybe something more.

The Will-Hannibal dynamic is a curious one, and many fans (myself included) have interpreted it to be of a romantic nature. While the exact situation of their relationship is never explicitly defined, many of their interactions seem to possess homoerotic undertones. But it’s just subtle enough to be left open to interpretation. Even Mads Mikkelsen has stated:

“It’s been a bromance since the very beginning and in my eyes, there is no doubt that the second that Hannibal lays his eyes on Will… he fell in love. Not necessarily in a physical way, but in a bonding way… whether people interpret that as a homoerotic thing that never really gets to be lived out or whether they interpret it as simply an emotional connection between two people, that’s up to the audience.”

READ: Nostalgia Shattered: When a Book Series You Loved is Incredibly Sexist

Whether or not this dynamic is driven by romantic feelings, it is clear that their relationship possesses more layers in the show than it did in the movies or even the source material. But the reinterpretation of character dynamics is not the only way that the show improves upon the Hannibal Lecter storyline. The show employed a unique visual style and an approach to storytelling that are unlike anything else on network television.

As much as I wish that HANNIBAL were able to find a larger audience, I completely understand why it was never accepted by mainstream viewers. The show presents a number of beautiful, surreal images. Bryan Fuller has even cited surrealist filmmakers David Lynch and David Cronenberg as huge influences for HANNIBAL’s visual style, and it definitely shows. The series offers several trippy dream sequences. It inter-cuts horrific murders with mouth-watering food porn that would give Emeril Lagasse a run for his money. And, in its third season, the show even has what I can only describe as a “kaleidoscope sex scene.” HANNIBAL was weird—it was really weird—and it only got weirder as the show progressed. But not just in terms of surreal imagery.

The show’s first season took a procedural approach. While it still contained ongoing story arcs, each episode involved the core group of characters tracking down a different serial killer every week. It was probably an attempt to appeal towards a broader audience, but as the series progressed and ratings began to plummet, the show took on an entirely new structure. Season two featured far fewer stand-alone cases. Season three abandoned this concept entirely and instead divided its episodes into two distinct story lines. What started out as a simple freak-of-the-week style show transformed into a slow-paced character study. In addition to this, the show began to ramp up the surrealist quality and made its homoerotic undertones far more overt. A combination of ingredients that was bound to scare away casual viewers. So why did Fuller decide to take this route?

It appeared that Fuller and his creative team realized that HANNIBAL would never be a smash success. The few viewers they actually had seemed to enjoy the show for its unconventional elements. Instead of trying to draw a larger crowd, the show began to cater to this niche audience. The writers delved deeper into peculiar territory, a creative choice that would help turn HANNIBAL into one of the most audacious and unique shows in the history of television, while also contributing to the series’ eventual downfall.

While HANNIBAL ended on a high note (with a stellar third season which effectively concluded the story), fans continue to wonder what could have been if Fuller was allowed to fulfill his six-season plan. There have been some discussions of a possible revival, but Fuller and Mikkelsen’s busy schedules guarantee that such a continuation will not occur for quite some time. Honestly, it’s amazing that the show survived as long is it did. HANNIBAL was a bizarrely beautiful story, the likes of which are rarely seen in the television medium. It may not have been a lengthy experience, but it was great while it lasted.