Things are starting to get good within the newest story arc by Robert Venditti in HAL JORDAN AND THE GREEN LANTERN CORPS #9. The Green Lantern Corps are in a sticky situation and Hal Jordan is dead! Well, maybe he’s dead? It’s up in the air. Luckily, this newest issue uncovers more on the whereabouts of Hal Jordan and the fate of the Green Lanterns.

Previously in HAL JORDAN AND THE GREEN LANTERN CORPS #8, Soranik and the remaining members of the Sinestro Corps met with John Stewart and the Green Lantern Corps. However, their heated meeting ended suddenly when the Green Lanterns received a distress call. The Green Lantern Corps, along with Soranik’s team, responded and found the monster Starro attacking an entire planet. Suddenly, Starro disappeared and all of the Lanterns were captured by Starro’s controller, Brainiac. Meanwhile, Hal Jordan’s ring searched for its owner even though he was at the heart of the explosion on Warworld.

READ: Want more on the previous issue of HAL JORDAN AND THE GREEN LANTERN CORPS? Take a look here!

HAL JORDAN AND THE GREEN LANTERN CORPS #9 kicks off with the Green Lantern Corps trying to break the barrier that’s keeping them from flying home. As they fail in their attempts, the residents of the planet, who are still under Starro’s parasitic control, attack them. I think the battle is just for the entertaining purpose of the massive brawl but that may be due to the fact that Starro’s mind control doesn’t really to make sense to me. Starro had been placed in its own container by Brainiac, which I’d believe would break its connection with the little parasites that were attached to the residents of the planet in the previous issue. It’s pointless for Brainiac to continue an assault on the Lanterns when they’re already in containment. However, it feels as though Venditti is adding this fight to intensify the terrible predicament the group is in. It wouldn’t be exciting if the Lanterns break free this early into the story arc, so Venditti might be showing readers how difficult of a foe Brainiac can be in opposition to Lanterns. It seems, if Brainiac wanted to, he could command Starro to use his parasites to mind control an army, so he could have many more tricks up his sleeve. 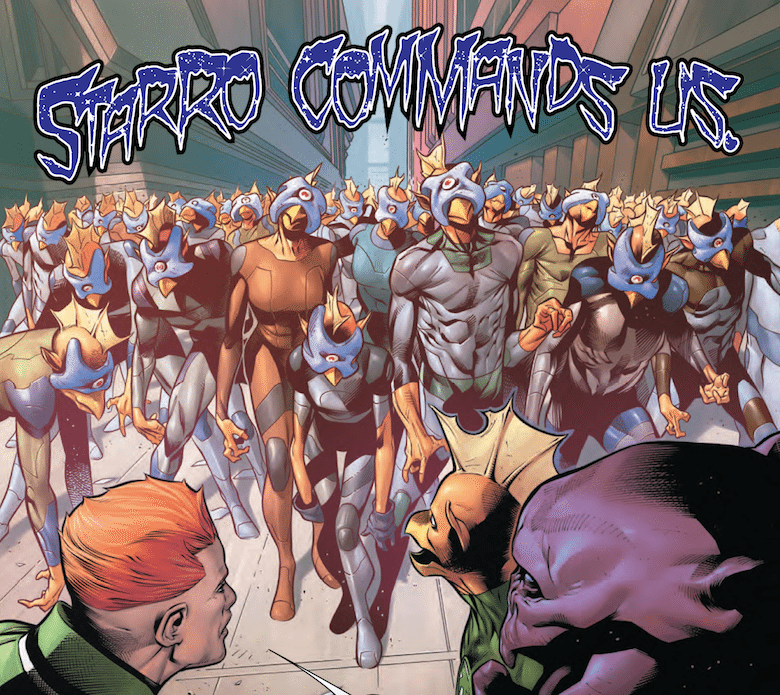 The other half of the issue involving Hal Jordan caught my attention more than the Green Lanterns Corps’ captivity storyline. Jordan’s ring, the one he forged himself, found its way to the exiled Guardians of the Universe: Sayd and Ganthet. Meanwhile, Hal is in some kind of Green Lantern purgatory where he reunites with an old friend of his. Whether or not this is a real place or a dream is anyone’s guess, but Jordan has been dead before so the former wouldn’t be farfetched. It seems that this was shown because he’ll probably return to the land of the living at some point; his name is in the title after all. Also, I like that Venditti is setting up a combination of beings, like the powerful Guardian Ganthet, will be involved in Jordan’s possible resurrection. It’s a hefty task and having several powerful characters help out makes the comeback more believable, considering death shouldn’t be something so easily defeated. Also, it allows for Venditti to write the resurrection as an impactful event for the universe because it involves so many major figures.

READ: What’s up with the Green Lanterns on Earth? Find out in the newest issue of GREEN LANTERNS!

The character that shines the most in HAL JORDAN AND THE GREEN LANTERN CORPS #9 is John Stewart. As the current leader of the Green Lantern Corps, he’s gotten more confident in his leadership abilities with every issue. He handles every situation with calmness and clarity, as a commander should. It’s a bit surprising though how quickly he solves problems for the group, as it lessens the tension. While under attack by the mind controlled fish-bird-people, he figures out the solution and only has to ask the right Lantern for some help. I feel as though there should’ve been more of a struggle, but this might be a testament to Stewart’s strength as a leader. 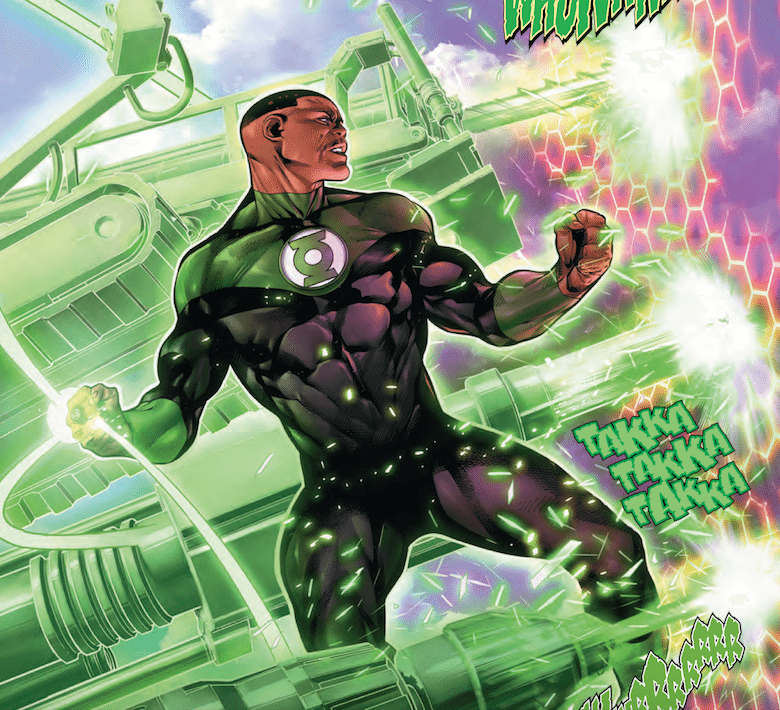 Jordi Tarragona and Rafael Sandoval continue their impressive work in this series. With a new issue that now features multiple storylines and settings, it could be overwhelming for artists to create unique and different atmospheres for each separate environment. However, they do a great job showing Ganthet and Sayd stranded in exile, Hal Jordan in purgatory, and the Green Lantern Corps (along with the Sinestro Corps) trapped on a separate planet alien planet. Tarragona and Sandoval wonderfully make all three of these storylines and their respective characters look different from each other by drawing Ganthet and Sayd on dreary and cold looking terrain, Jordan surrounded by a green fog, and the Lanterns on a bright and sunny world. This all makes it easier for readers to differentiate the storylines that are occurring simultaneously and while being spaced out in different panels. 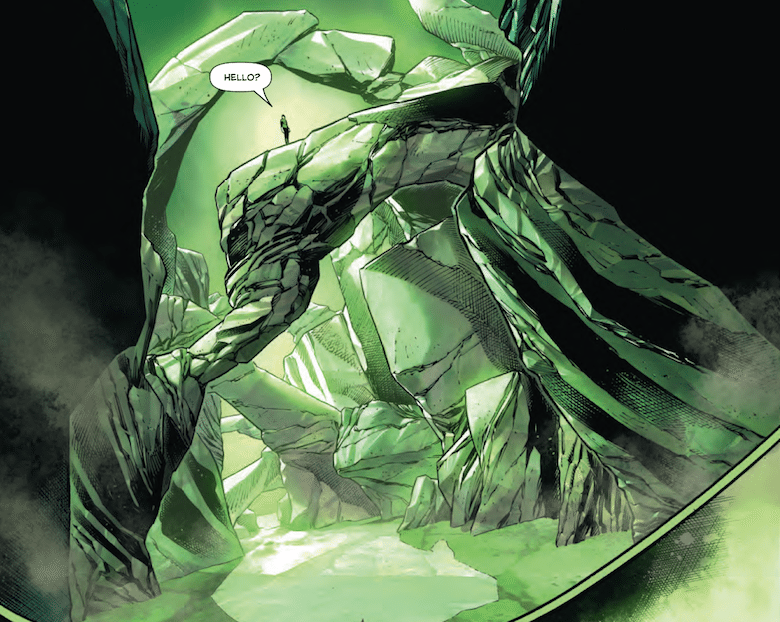 HAL JORDAN AND THE GREEN LANTERN CORPS #9 combines good storytelling by Venditti with strategic art from Tarragona and Sandoval. Though the Green Lantern Corps part of the story may not be for every reader, the Hal Jordan storyline is sure to excite most with the return of Ganthet and Sayd. There are also some old friends who reappear in this issue and they should play a large part in HAL JORDAN AND THE GREEN LANTERN CORPS #10. I won’t spoil who they are here, so you’ll have to pick this issue up and find out for yourself!