HAL JORDAN AND THE GREEN LANTERN CORPS #7 brings an end to the “Sinestro’s Law” storyline! Hal Jordan and Sinestro go one-on-one with the entire universe on the line. Writer Robert Venditti and the artists Jordi Tarrogona and Rafa Sandoval hit one out of the park with this one

In the last issue, the Green Lantern Corps set their sights towards the Sinestro Corps to get Guy Garner back. Meanwhile, Hal Jordan brought the fight to the Yellow Lanterns to their home turf. The Sinestro Corps were stronger than ever with the power from the fear engine fueling their rings, but Jordan held his own. That is, until Sinestro arrived on the scene and wanted his former protégé all for himself.

READ: Want more on the previous issue of HAL JORDAN AND THE GREEN LANTERN CORPS? Take a look right here!

The issue begins with a strong reminder of Hal Jordan’s character, recounting how he became a Green Lantern. It led him to the belief that one day he’ll go out in a blaze of glory like his father did. This is an intense setup by Venditti, as it makes it seem like Jordon has a death wish or is, at the very least, at peace with dying. We know of Jordan’s desire to be a hero and have seen his many heroic deeds over the years, but he’s never before mentioned the assumption that he’ll die in battle. It’s a fantastic introduction that brings doubt as to whether Jordan will win this fight with Sinestro and, even if he does, whether or not he’ll survive it. Speaking of Sinestro, Venditti portrays him as egotistical as ever. He continues to believe that fear is the only way to bring order to the universe and wants Jordan to join him as a member of the Sinestro Corps. It means a great deal for a villain to have convictions such as this since it adds depth to the character, and it may be why Sinestro is one of my favorite DC villains. 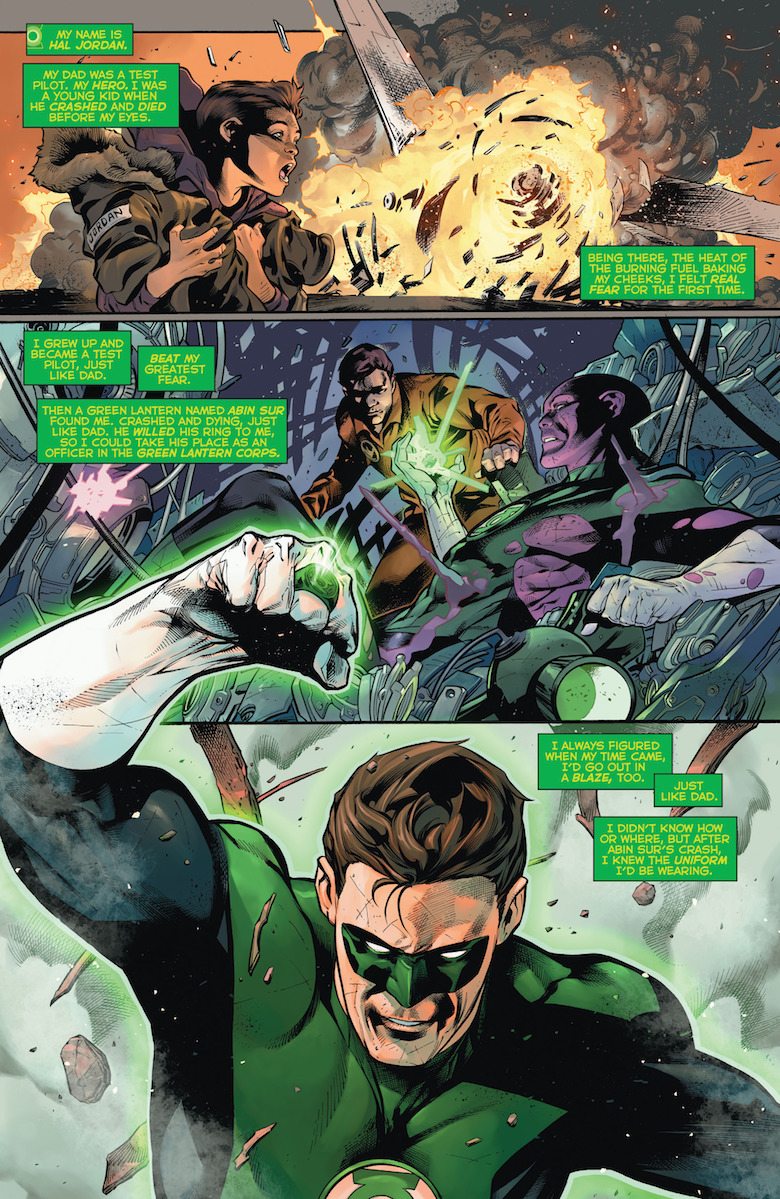 The “Sinestro’s Law” story arc ends with a nail-biter. Hal Jordan is at a complete disadvantage, with Sinestro having both the fear entity Parallax and an extra boost in power from the fear engine. It’s a bit refreshing to see Sinestro so powerful. He wasn’t this strong when he was ruling the universe, with the Green Lantern Corps out of the picture, and he’s never been this powerful when confronting Jordan before. Venditti stacks the odds against our protagonist convincingly and it feels as if he’s in real danger, which was greatly needed since Jordan’s recent adversaries have been pretty lackluster.

READ: There are other Green Lanterns in the universe and they’re both on Earth! Read our latest GREEN LANTERNS review here!

HAL JORDAN AND THE GREEN LANTERN CORPS #7 features the most stunning art thus far in the series. Jordi Tarrogona and Rafa Sandoval have impressively detailed the scenes between Hal Jordan and Sinestro as the two characters go head to head. There are two series of panels in particular that deserve praise. The first involves Jordan in one panel with Sinestro mirrored in the next as they’re about to fight. They have their respective colors surging around them and it makes them both look godlike before they’ve even make a construct. This built anticipation for the battle and made me eager to turn the page. The second involves a truly beautiful transition between two scenes. There’s panel featuring Soranik punching someone with a yellow construct, and the following panel involves Sinestro doing the same. Both Sinestro and Soranik (like father, like daughter) are positioned in the background, while the victim of their constructs is in the foreground. The transition links two different fights with a similar image that makes the movement from panel to panel feel seamless. 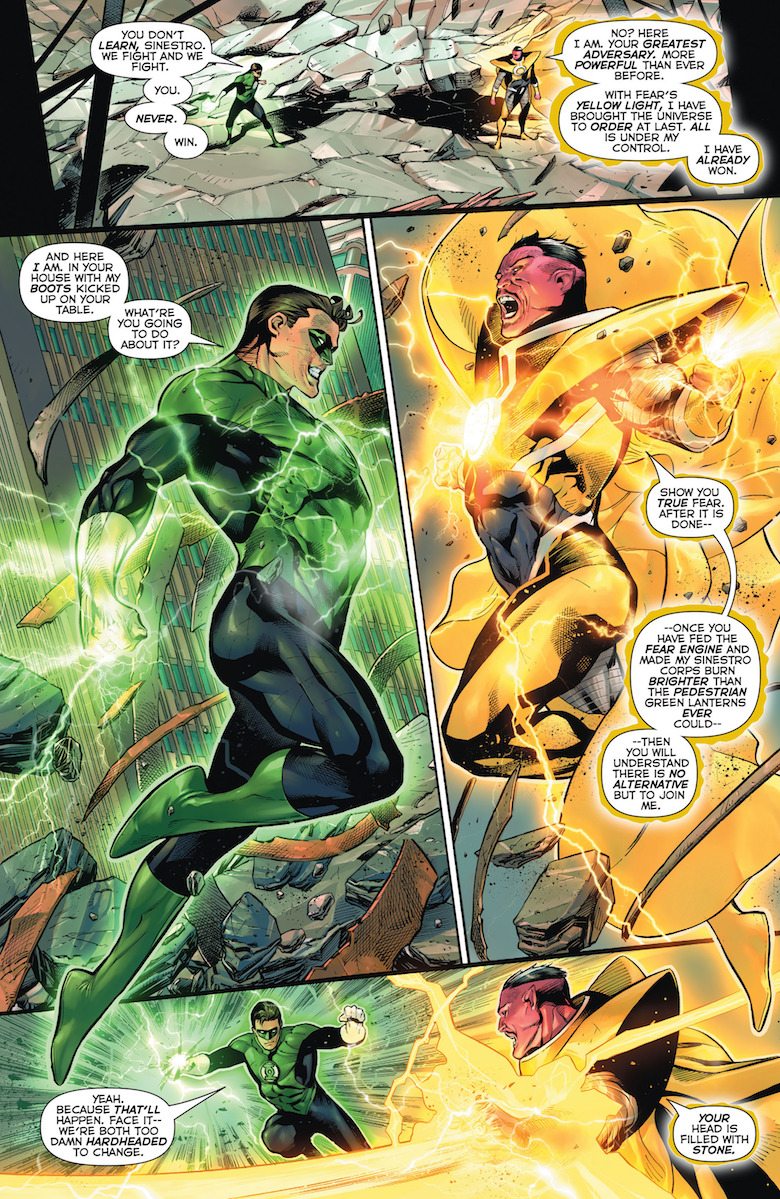 To conclude, HAL JORDAN AND THE GREEN LANTERN CORPS #7 is a satisfying end to the story arc. All of the storylines within the series were promised to merge at some point and they all do so in one way or another in the issue. The story arc itself has been phenomenal and might be the best one from Venditti in his tenure as a writer on a Green Lantern series. There are a lot of questions following the end of this issue for the Green Lantern Corps. As the series continues with new story arcs and adventures I hope these are all answered, but until then we’ll just have to keep reading!