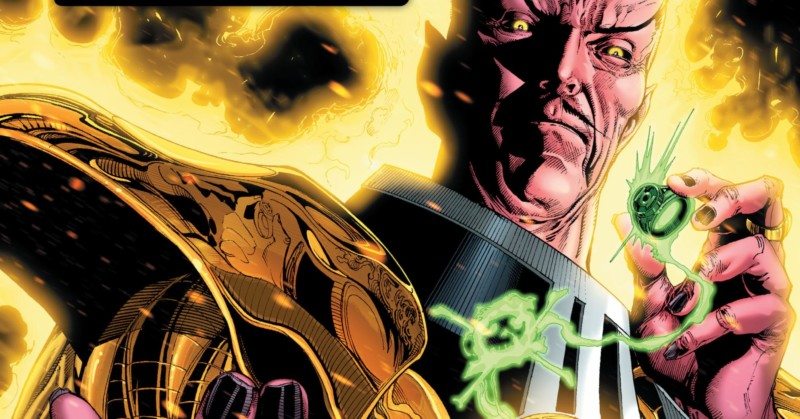 Have you ever wanted to know what happens when you bring Sinestro the wrong Green Lantern? Well you can pick up HAL JORDAN AND THE GREEN LANTERN CORPS #4 to find out. Though here’s a little hint: it doesn’t end well.

Previously in HAL JORDAN AND THE GREEN LANTERN CORPS #3, Sinestro worked out a deal with Administer Lash, the leader of the religious type group known as the Sacrament. Meanwhile, in a different sector in space, Hal Jordan came back as a Green Lantern and he’s been looking for the Green Lantern Corps. While on his journey, he came across a few Sinestro Corps members capturing several citizens of an alien planet. As is his nature, Jordan tries to save them. However, he is overcome by the yellow light and fails. 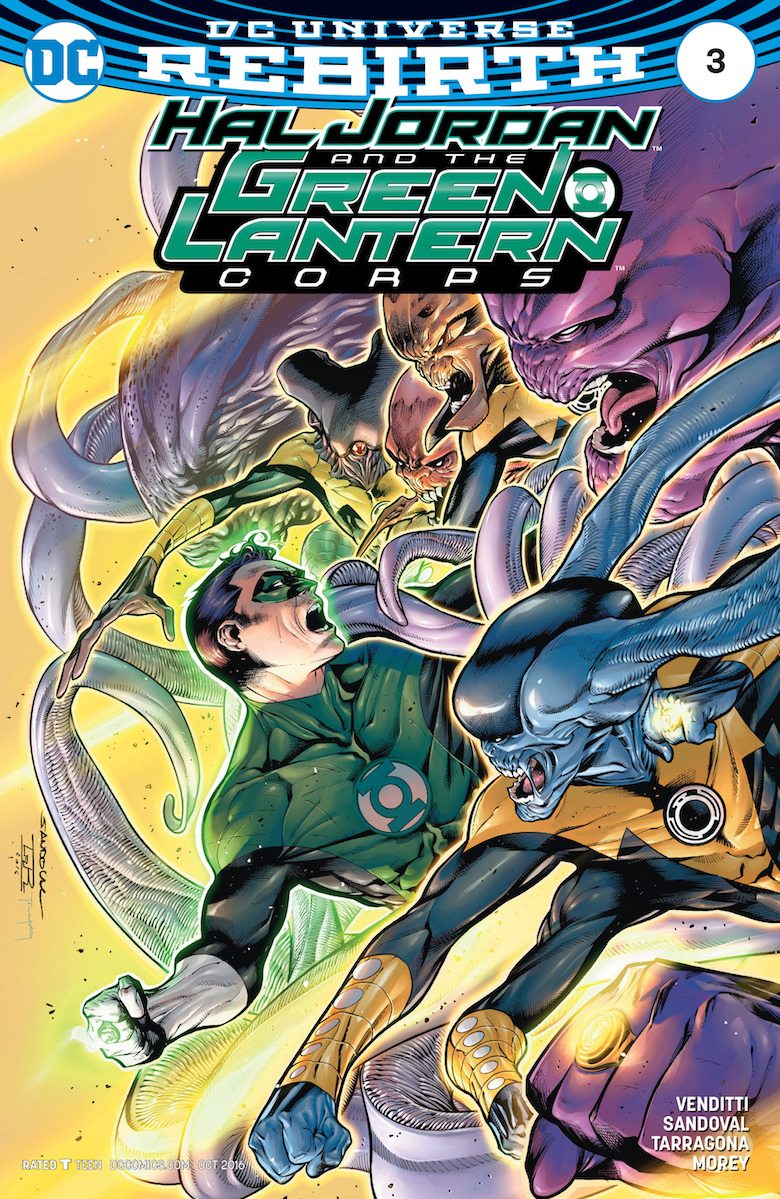 In HAL JORDAN AND THE GREEN LANTERN CORPS #4, writer Robert Venditti takes the narrative away from Hal Jordan and moves over to the leader of the yellow lanterns himself, Sinestro. It’s a great way to intertwine the Hal Jordan storyline with the Sinestro storyline in this series. Sinestro is waiting for Jordan to be delivered to him when the issue opens. He has already heard of Jordan’s defeat and the anticipation of the two meeting is incredibly compelling since the Jordan—Sinestro rivalry may be one of the best that the Green Lantern titles have ever offered.

The issue packs in a lot of content in only a few pages. This seems to be a trend in each issue in the series as a whole and it is necessary due to the fact that the HAL JORDAN AND THE GREEN LANTERN CORPS series merges several different titles prior to Rebirth into one. However, the intertwining of storylines has merged them with impressive grace, leading all characters to a single destination. Venditti is tasked with bringing Jordan, the missing Green Lantern Corps, and the Sinestro Corps’ rise to power all together and it works well in this issue with Guy Gardner and Hal Jordan running into the Sinestro Corps to connect the storylines.

READ: How did Hal Jordan get his ring back?! Find to in HAL JORDAN AND THE GREEN LANTERN CORPS REBIRTH #1!

HAL JORDAN AND THE GREEN LANTERN CORPS #4 does a great job at reminding readers of how complex Sinestro’s character actually is. He isn’t just the scorned former mentor of Hal Jordan, nor is he just some power hungry villain hell-bent on controlling planets and the universe. Venditti continues to paint him as the hardened, self-proclaimed hero of his own story. Sinestro only wants to protect the universe by his own means and morals, rather than rely on others like the Green Lanterns. He is still powerful and intimidating as he punishes his own Corps members. At the same time, he is kind when he proclaims that he does not want children captured and orders their safe return.

READ: What have the other Green Lanterns been up to? Check out our GREEN LANTERNS #5 Review here!

The art by Ethan Van Sciver offers much to all types of readers. The constructs in the issue are beautifully drawn. Sinestro shows off his immense power early on in the issue and Van Sciver doesn’t hold back the wonder. Not only that, but the constructs created by Soranik may be even better. The medical instruments she creates add a sense of intrigue to the panels. Also, the characters in the issue are depicted much more simply. There is less detail to the character’s design, which allows for less off-putting character looks considering that both the Sinestro Corps and Green Lantern Corps are composed of aliens from every different alien race in the universe. 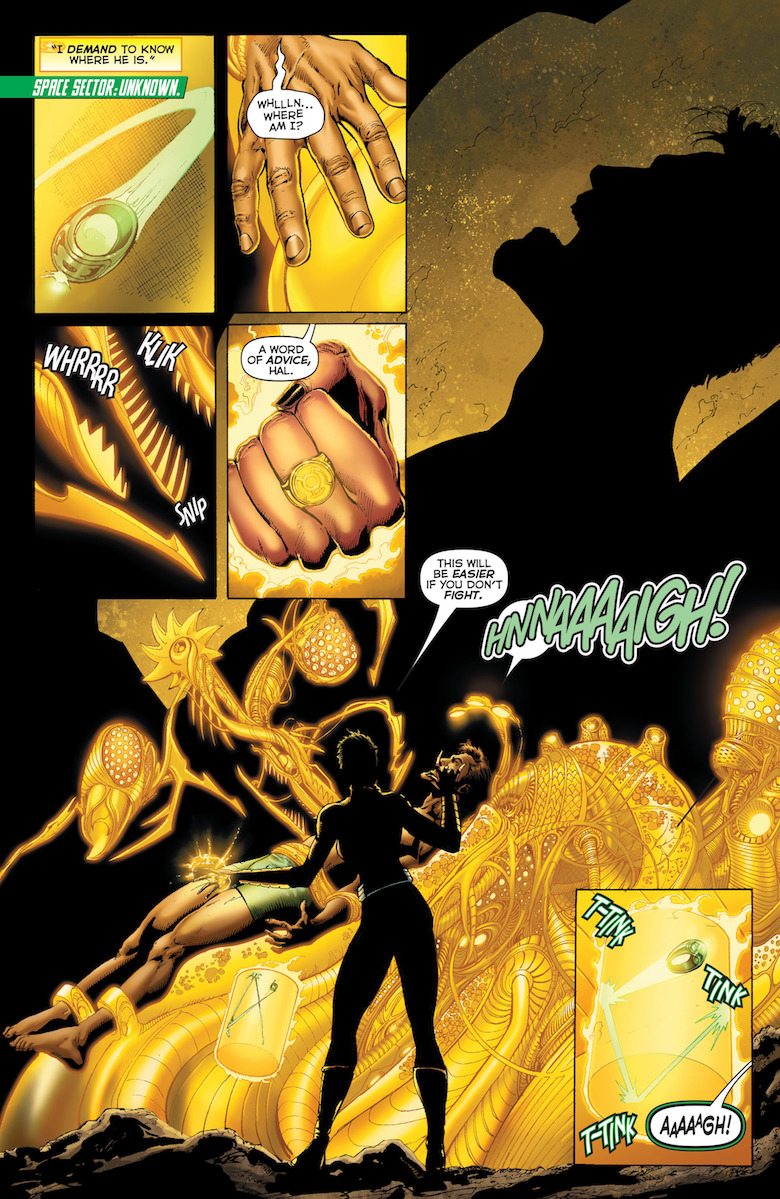 Overall, HAL JORDAN AND THE GREEN LANTERN CORPS #4 is a solid addition to the series. The issue opens the door for the Green Lantern Corps to reveal themselves to the public. More importantly, steps are being made for the return of Hal Jordan to join the Corps and confront Sinestro. The Green Lantern Corps has never been weaker while the Sinestro Corps has never been stronger. Tensions are high and the buildup to a war keeps me wanting more.