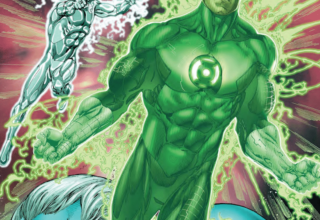 HAL JORDAN AND THE GREEN LANTERN CORPS #10 shows us more of Hal Jordan in the Emerald Place. Jordan found himself there, but he doesn’t belong. Writer Robert Venditti and artist Ed Benes put together a strong issue that beautifully shows us Kyle Rayner’s attempt to get Jordan back to the land of the living. Can he do it? What does it mean if he can…or can’t?! 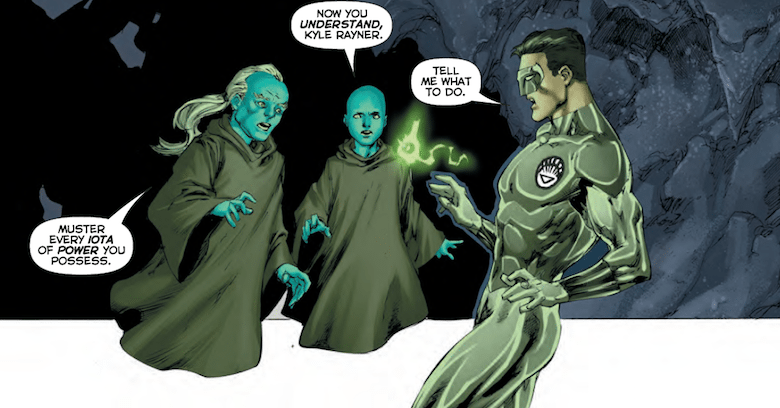 READ: Want more on the previous issue of HAL JORDAN AND THE GREEN LANTERN CORPS? Check out our review here!

Writer Robert Venditti doesn’t spend too much time on the captured Green Lantern Corps in this issue, which is fine by me as it’s been the least interesting storyline at the moment. The group has done very little in the series since their return, so there is not much reason to care about them. Also, the universe is unaware of their return, so no one is dependent on the group. Hal’s death has certainly grabbed most of my attention thus far in the story arc. Though it may not be for everyone, this issue is packed with lots of dialogue and little action. It seems to help the plot by setting up the next journey for Jordan after Abin Sur tells him that he must rekindle hope. While it’s not certain what Abin Sur means, I enjoy the ambiguity of his message as it provides room for interpretation. 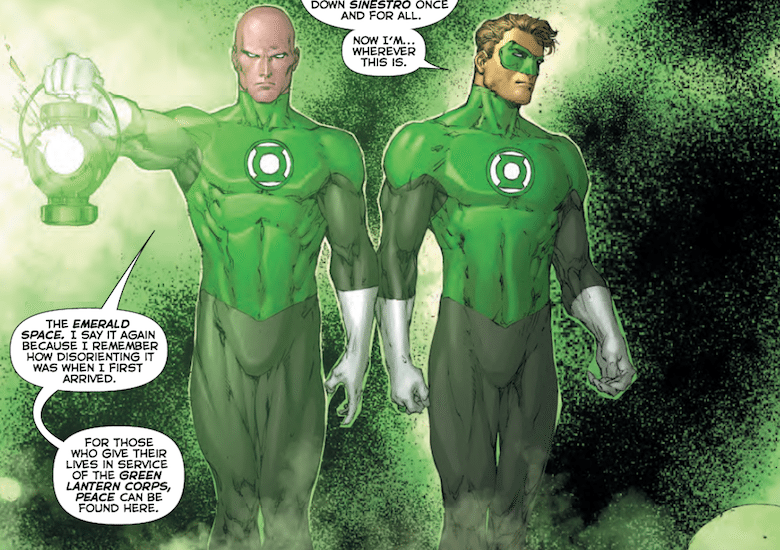 There is a surprising amount of self-doubt in two characters: Hal Jordan and Kyle Rayner. While in the Emerald Place, Jordan has a long conversation with Abin Sur, a man who had once been called the greatest Green Lantern. During their conversation, Jordan admits that he has been trying to live up to Abin Sur’s legacy ever since the ring chose him. However, he worries that he may not have been able to do so. As for Rayner, he is unsure that he can resurrect Jordan. The Guardians of the Universe ensure him that he can since he is the White Lantern, the embodiment of life, but Rayner still says that he can’t during the attempt. This self-doubt is uncharacteristic of both lanterns. Usually, they are headstrong and confident in their abilities to do the impossible. Their self-doubt doesn’t seem to make sense when the both of them have recently done amazing things. Rayner became the only being to come back from the source wall and Jordan became the only lantern to forge his own ring. I don’t see how they could doubt their abilities when they’ve already done so much. Though it is possible that the doubt comes from the desire to not do greater harm, such as Rayner accidentally making it harder for Jordan to come back.

READ: There are still Green Lanterns on Earth?! Find out more on them here!

Artist Ed Benes brings a different style to the HAL JORDAN AND THE GREEN LANTERN CORPS series. The characters are in line with what other artists have done in the series. However, there is a serene and beautiful atmosphere in the panels thanks to Benes’ background designs. For example, while Jordan is in the Emerald Place, the setting has a dream-like feel to the artwork. The green mist adds to the feel of the Emerald Place’s otherworldly setting. On the other hand, Rayner, along with the Guardians of the Universe, tries to bring Jordan back in a beautiful sequence. Here, Benes shows the increasing intensity of their attempt at resurrection as the issue goes from panel to panel. 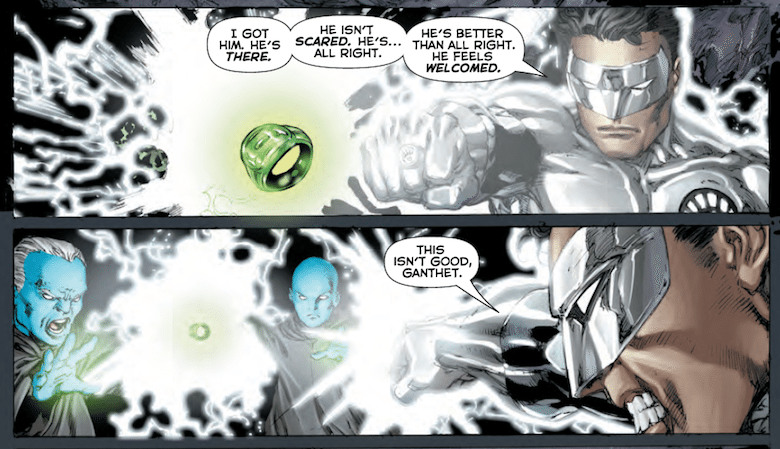 HAL JORDAN AND THE GREEN LANTERN CORPS #10 focuses on Hal Jordan and the attempt to bring him back from the Emerald Place rather than the struggles of the trapped Green Lantern Corps. Jordan has taken center stage and it makes the series even better. His resurrection has been a plot point I assumed would occur and I’m glad it is being addressed sooner rather than later with this issue. I love how Venditti dedicates most of the issue to the resurrection attempt since it will be an important event. At the end of the issue, we find out whether or not they could bring Jordan back, which is a spoiler that I will not give away. Either way, it will be interesting to see what happens to Jordan and the rest of the Green Lantern Corps in the HAL JORDAN AND THE GREEN LANTERN CORPS series going forward.